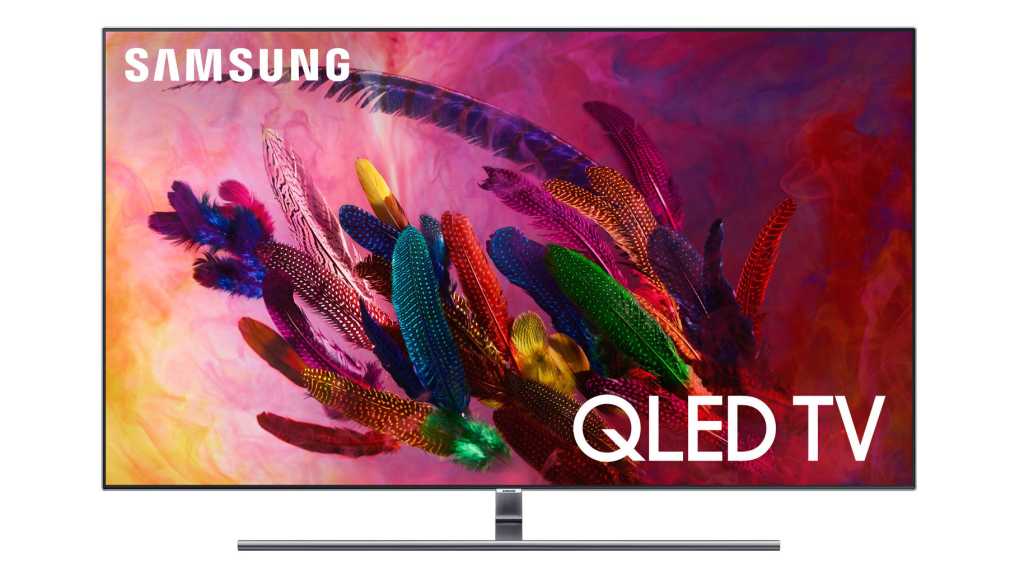 Compared to an equivalent OLED TV, Samsung’s Q7FN looks like good value. Its high brightness means HDR content looks fantastic, and you don’t need to draw the curtains when it’s bright and sunny. There are plenty of other benefits, too, including the separate connections box which is ideal if you plan to wall-mount your new TV as the thin cable also delivers power to the screen. Last year’s model delivers pretty much the same image quality but loses out on some of the 2018 model’s features such as the phone setup, voice assistant and requirement for just one mains socket. But then at almost half the price these days, it’s undeniably more wallet-friendly.

Samsung’s Q7FN is a couple of rungs down from the very top of the 2018 ladder, but still benefits from a QLED panel among other treats. Put simply, QLED is Samsung’s technology that offers OLED-like colours with the high brightness levels that only LED TVs can offer.

Best of all worlds? Let’s take a closer look.

The 55in Q9FN – the flagship – costs an extra £500, which does make it one of the most expensive choices, but it buys you a full-array backlight rather than the edge lighting you’ll find on the Q7F.

For more alternatives, see the best TVs to buy in 2018.

The Q7FN oozes quality from the moment you begin unboxing it. The extremely slim bezels make the image look even larger than it really is, and the straight bar stand is elegant without being too fussy.

Of course, this TV is designed to be wall mounted. It’s thin to start with, but you can buy the no-gap wall mount which means it hugs the wall almost like a picture frame.

The best part is the ‘near invisible’ cable that’s roughly 3mm thick. This is the only wire that the TV needs, so you don’t need to spend extra to get a builder to cut a channel into your wall to hide a bunch of wires.

The cable, which includes a fibre core, runs to the One Connect box. This houses all the inputs and outputs, and is the only thing that requires a mains connection: power is supplied to the TV over that tiny 3mm cable, as well as video and audio signals.

It’s a fairly chunky box, but has four full-fat HDMI inputs, three USB 2.0, optical audio out, satellite and DVB-T2 tuners plus a common interface slot, should you need it. One of the USB ports delivers 1A and the other two 0.5A.

There’s no Freeview Play or YouView: Samsung instead calls its system TVPlus. Fortunately, unlike before you still get the  four main UK on-demand players (iPlayer, ITV Hub, All 4 and Demand 5), along with Amazon Video and Netflix, both of which suport 4K streaming. TVPlus includes a few other streaming services which broaden the available UHD content, although most of it is paid-for movies.

When you’re not watching TV, the Q7FN has an ‘ambient’ mode which can display photos, abstract pictures or information such as the time, date and news headlines. This is done at a much reduced brightness, so is said to be very power-efficient and won’t cost more than a few pounds per year to run.

There are two remote controls in the box, a standard rubber-buttoned unit and Samsung’s One Remote. This doesn’t look as nice as it has in past years, being made from black plastic rather than silver metal, but does the same job: it can control your existing set-top boxes and also has a built-in mic so you can use the voice assistant built into the Q7FN.

When you first turn on the Q7FN you’re promted to download Samsung’s SmartThings app. Via Bluetooth, your phone can be used to set up the TV, including sharing your Wi-Fi network name and password so you don’t have to fiddle around with the standard remote control and an on-screen keyboard.

It’s still not the fastest process as you’re forced into setting up a SmartThings account, then there are a few downloads before you can try out your new TV.

The Tizen OS is nice to use, and as fast as you’d expect from a set that costs this much. It’s clean an intuitive, giving you easy access to settings, apps and inputs.

Using the Bixby assistant you can hold the mic and say “HDMI2” or “launch YouTube” and it’ll quickly carry out the command. There’s also a universal search which means you can ask for a programme and get results from all the services you’re signed into.

HDMI devices are recognised automatically and given not just  a friendly label (such as Xbox One) but also a nice icon. This means you don’t have to even refer to ‘HDMI2’ but can just select Xbox One from the list or ask the assistant to switch to Xbox.

Despite the price, the Q7FN uses edge lighting rather than backlighting. That’s surprising because even mid-range TVs can have backlights with local dimming. This is reserved for only the Q9FN and certain models in the Q8 range.

However, there were only a couple of occasions where there was any noticeable light leakage from the bottom edge (where the LEDs reside) and these were only in menus or test patterns: not actual video content.

You’d expect excellent quality from a top-end Samsung TV, and the Q7FN doesn’t disappoint. QLED isn’t pure marketing fluff: the technology really works well to deliver great black levels and eye-popping colours. You might like to read our comparison of QLED and OLED.

The TV defaults to Standard mode, but you’d be forgiven for thinking it was in Dynamic mode as the standard saturation is akin to Dynamic on most other LED TVs.

That’s not to say that everything is oversaturated: greens and oranges are a bit overblown, but skin tones are kept in check and still look natural. This setup makes demo footage look absolutely stunning, with vibrant colours and biting detail.

We dialled out a bit of saturation and sharpness from the defaults, and were happy with these tweaks for general viewing.

As the Q7FN offers a peak brightness of 1500 nits, it supports HDR Premium. HDR content looks fabulous which dazzling whites and deep blacks in the same scene. And yet, despite the high brightness, the QLED tech retains those eye-popping colours. Planet Earth II on 4K Blu-ray, for example, is stunningly sharp and detailed.

Motion is super-smooth thanks in part to the ‘Motion 240’ panel, which means it runs at 120Hz, twice the usual refresh rate of standard LCD panel. It’s also due to the Q Engine processor’s capabilities, which are beyond criticism as far as we’re concerned.

You can turn off the judder and blur reduction in the settings if you prefer, and any picture quality settings can be saved per source.

If there’s a weakness of QLED compared to OLED, it’s viewing angles. QLED isn’t a whole new screen technology – it’s based on LCD. This means that brightness and colour saturation diminish as you move further off-centre.

Samsung uses VA panels (just like Philips with its 6703) so the Q7FN has a similarly narrow optimal viewing range. To be fair, the loss of colour saturation isn’t quite as noticeable because colours are so vibrant in the first place, but if your setup is such that you’re looking at the screen at a 45-degree angle or more, you’ll miss out on the best image quality.

Sound quality deserves more than a passing mention. Many buyers might assume that any TV that’s 45mm from front to back can’t produce any audio you’d want to listen to. But the Q7FN’s speakers manage to deliver a well-rounded sound that’s perfectly adequate for day-to-day viewing.

You’d probably still want a good soundbar or surround system for watching films, but if you predominantly binge on Netflix or catch-up TV, you might well find you don’t need a separate sound system.