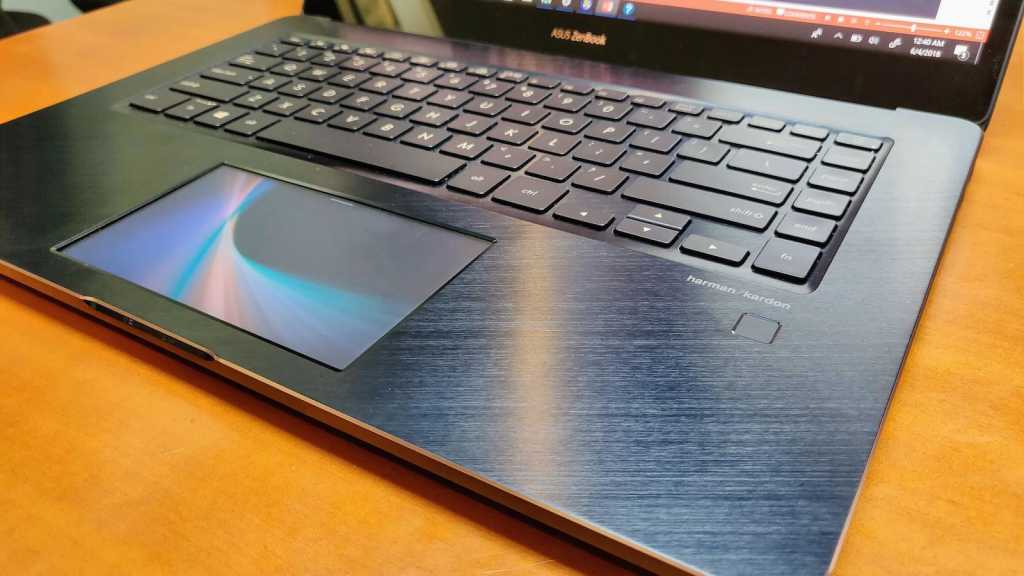 The ZenBook Pro 15 is likely to cost a lot of money but for those with the budget this could be a great MacBook Pro alternative and rival to the Dell XPS 15. It might not have the tiny bezels to match the Dell, but there’s still high-quality design and build here as well as a seriously impressive spec sheet.  The differentiator is the ScreenPad, which we think could genuinely be useful to a lot of users, but only time will tell on that front.

Dual screen devices are a theme of Computex 2018 and this new 15in laptop from Asus has one instead of a regular trackpad as well as some high-end specs like a Core i9 processor. Here’s our Asus ZenBook Pro 15 hands-on review.

The ZenBook Pro range isn’t anything new but it’s been somewhat kept out of the limelight due to rivals such as Dell’s XPS laptops. This year there’s something eye-catching about the device in the form of the ScreenPad.

It’s a Full HD screen in place of a regular trackpad which sounds great but is it simply a ‘look over here’ gimmick?

As usual, there are no confirmed details on price and availability but we can expect the ZenBook Pro 15 (UX580) to arrive in Q3 around August or September. That’s a similar time to the Asus ROG Phone.

With the high-end design and specs here the ZenBook Pro 15 price is not going to be wallet friendly. It’s a MacBook Pro and Dell XPS 15 rival and according to Trusted Reviews will cost under £1,900 for the Core i7 model and around £2,200 for Core i9.

There’s also a ZenBook Pro 14 (UX480), which will arrive later than its bigger brother. Also check out the new  Asus ROG Strix Scar 2.

Largely, the ZenBook Pro 15 is a standard laptop in terms of design and build. Everything is where you’d expect it to be so it’s really the ScreenPad that’s out of the ordinary.

The ScreenPad is ‘the intelligent touchpad’ that combines a regular trackpad with a Super IPS+ LCD display so you can do a lot more with it than pointing and clicking.

It’s a sight to behold and this secondary glass covered display is 5.5in and Full HD so it’s basically like having a smartphone embedded into the chassis – like the Razer Project Linda actually does.

Like a phone, it’s got its an interface and launcher so you can control what’s going on. We found it intuitive to use and although there was a bit of lag, the sample wasn’t running final software.

Out-of-the-box there are quite a few things you can do with like use it as a calculator, calendar or numpad – and it can automatically switch between functions based on the software you’re using.

Furthermore, it can be a music player and also has Office support so you quickly access things like formatting tools.

If you’re not using a mouse, this could speed things up nicely for certain tasks. It just might come down to individual usage as to whether it’s genuinely valuable every day.

The ScreenPad also has a Screen Extender mode so you can use it put anything you like on it. Again, this sound great but needs proper testing before we can give it the all clear.

Asus says there’s ScreenPad support for Word, Excel, PowerPoint and YouTube with more coming – hopefully developers get on board. Asus Sync is in development and will let users control their phone from the ScreenPad.

Back to more regular items and the screen-body-ratio remains at 83 percent so the laptop has bezels that are a fair bit bigger when compared to Dell’s Infinity Edge.

While the trackpad is interesting and innovative, the same isn’t true of the keyboard. The ZenBook Pro 15 and Pro 14 have a backlit chiclet keyboard with membrane switches so the experience feels less punchy and responsive compared to some rivals.

At 18.9mm and 1.88kg, the ZenBook Pro 15 isn’t challenging for the most portable 15in laptop award but it’s not bad for what you’re getting specs wise.

So it’s not the best choice if you’re looking for a device to travel around with you all the time, it’s more towards a desktop replacement but throwing it in a rucksack is certainly not out of the question.

The ZenBook Pro 15 is only available in Deep Dive Blue, which comes with stylish copper accent trim. You get the premium feel we’ve come to expect from a ZenBook with the striking aluminium case and its concentric circle finish (you can ignore the unfortunate dent on the sample we saw).

As the Pro title suggests, the laptop it a bit of a powerhouse with a big hitting spec sheet including high-end processing and graphics.

As mentioned earlier, this model will cost a bomb but there’s also a Core i7-8750H and Core i5-8300H options for those feeling a little less flush.

In the graphics department is an Nvidia GeForce GTX 1050 Ti with 4GB of GDDR5 VRAM. The option, for those requiring more grunt, of a GTX 1060 or even 1070 would be nice but this is a Ti model.

As usual with a hands-on, we haven’t run any benchmarks but on paper the ZenBook Pro 15 is a very capable machine and should be able to handle intensive tasks.

That will make it an attractive laptop for users such as creative who want a Windows alternative to the MacBook Pro. It will come with Windows 10 Home or Pro.

Asus has also made sure such users will be tempted due to the screen, as well. The 15.6in LED backlit display comes in either Full HD with optional touch or 4K which is touchscreen by default. The touchscreen models support the Asus Pen stylus, too.

What’s impressive, in theory until we test it out, is that the ZenBook Pro 15 comes with an impressively low Delta-E < 2, as well as 132 percent sRGB and 100 percent Adobe RGB. So for jobs where colour accuracy is important, this could be a great choice. Asus says the NanoEdge display is Pantone validated.

There are plenty more specs to mention, albeit less exciting ones. So the ZenBook Pro 15 has dual-band 11ac Gigabit Wi-Fi, a fingerprint scanner VGA webcam, array microphones with Cortana voice-recognition support and a Harmon Kardon stereo sound system with a smart amplifier.

For connectivity there are two USB-C 3.1 ports that support Thunderbolt 3, two USB-A 3.1 ports, as well as HDMI, a combo audio jack and a microSD card slot.

The ZenBook Pro 15 has a 71Wh battery with Asus quoting nine and half hours battery life – this is via MobileMark 2014 Office Productivity on the Core i7 model.

It has a traditional DC power supply so you don’t need to use one of the USB-C ports for charging. And fast charging means you can get 60 percent in 49 minutes, according to Asus.