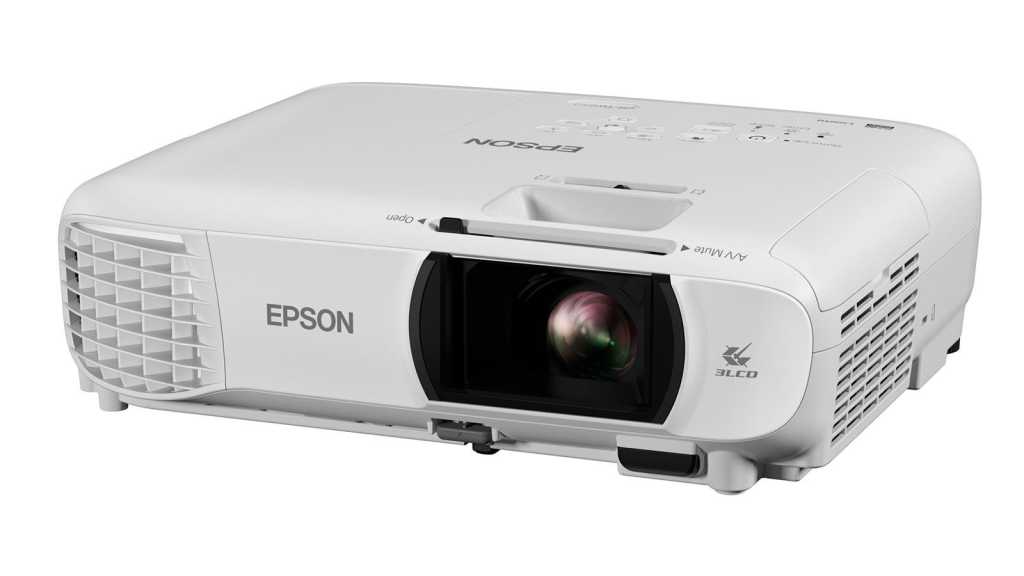 For a relatively inexpensive projector, Epson’s EH-TW650 offers a remarkably bright image with well saturated colours. Generating this image consumes nearly 300 watts, and produces a fair amount of heat. But it’ll deliver a bigger picture than the largest TV at a fraction of the cost.

Not everyone wants a giant wall-mounted TV cluttering up their home, and for them and home cinema aficionados, a projector can be the perfect solution.

But with TV getting progressively bigger and somehow cheaper, can Epson make a home cinema projector that can still compete on price and performance?

In the USA the branding of this product is slightly different, and it has the title of Home Cinema 1060 1080p 3LCD Projector. You can buy it from Amazon for $549.99.

That price makes it slightly cheaper than the Optoma HD142X at US$579, though it is undercut by the new BenQ HT1070a, available for just US$539.

Our initial inspection of the Epson EH-TW650 offered a generally positive outlook.

For home cinema use, this is a compact design that’s 302mm wide‎ 252mm deep and just 92 mm high. It’s not as small as some ultraportable models, but for a projector with 1080p resolution an a 3,100 lumens output, this is a lean machine.

The optical system is mounted off to the right from the front, and the lamp is at the rear left, accessible under a removable panel. Air is pushed out of the front left, and drawn in through the front right where dust is intercepted using a replaceable dust filter.

The projection system is 3LCD, as opposed to DLP, which means no rainbow effect for those which notice and are bothered by this colour separation effect.

Epson also built a neat sliding lens cover into this assembly, a good alternative to the cap-on-a-string solution used by some designs.

As seems the norm these days, a sub-selection of buttons are on the top along with some useful LED indicator lights, and those wanting more controls can use the simple but effective remote.

We were slightly aghast as to how many informative stickers Epson put on it, entirely ruining the clean aesthetics of its elegant design.

There are six labels, the biggest of them being a 9×6 cm ‘Warning’ on top that tells you in three languages that if you pull the power when the projector is hot that the bulb might explode. Given the microscopic size of the fonts used on all labels, assumes that all EH-TW650 buyers will have perfect vision or a recent eyewear prescription.

The rear inputs are a combination of ones we’d reasonably expect, and few that aren’t so common. Dual HDMI ports, one with MHL is fairly standard, as is VGA.

There is a USB Type A port which allows a flash drive to be a source for viewing a very limited selection of file types, and curiously a USB Type B so you can connect a PC to drive the projector directly over USB.

That last port makes little sense to us because all computers come with HDMI or VGA, and Epson recommends at least a Core2 Duo system to drive the USB connection.

One input that we saluted, mostly for nostalgic reasons, was the composite video input. Using this RCA connection, you could hook up an old VHS player or an early games console, like our dusty but still functional, Super Nintendo.

There are also RCA audio connectors, and these make up for the lack of any 3.5 mm audio jack socket.

Epson gave the EH-TW650 a feature that we’re sure on paper sounded a great idea, but ended up as a mediocre solution to a problem solved better elsewhere.

Having Wi-Fi should be another box ticked because becoming part of a network allows all manner of useful facilities regarding presenting images and video that comes from computers or mobile devices.

Unfortunately, the implementation is as a Wi-Fi hotspot that you connect your mobile device or laptop. At which point you have no internet connection. Therefore, if you’ve not downloaded that video or images to the device, they’re not accessible to project.

The same electronics could have been used to connect the projector to a local access point, therefore opening it to any local network device (wired or wireless). Those that want that facility should buy a Google Chromecast (£25/$30), and avoid trying to bend the Epson iProjection app to do anything similar.

Or, use the MHL functionality if your phone or tablet supports that technology.

The integral file presentation technology is equally unimpressive. It can handle just jpg, BMP, gif and png, and a single video format of AVI version 1.0 with either PCM or ADPCM audio.

Those with Mp4, MKV or AVI with compressed audio or even MP3 audio should find an alternative method of presentation it appears.

From the outset the EH-TW650 offers an excellent quality of projection that would have cost twice this amount for only a few years ago.

Epson claims a massive 3,100 lumens of output, enough to create a 300in projection at a range of 6.8 metres. Unfortunately, turning up the brightness to 100 percent tends to bleach the image somewhat, but it is certainly usable at higher than 2,500 Lumens.

Colour representation is also very good, as are static contrast levels. For watching a movie or live sporting event as long as the projection surface is clean and white the results are exceptionally clear and the colours vivid.

But, we should point out that if you take the EH-TW650 out of ECO mode, the fan noise will immediately increase. It goes from an easy-to-ignore 28 dBA up to a noticeable 37dBA or higher depending if your ears are in line with the thermal exhaust port.

And, in an enclosed space with limited ventilation, the warm air created could elevate the ambient room temperature quickly.

We should also mention that the best refresh rate on offer is 60Hz, and that was probably the limiting factor that persuaded Epson not to offer a 3D mode on this product.

All projectors have running costs, usually a replacement bulb after a specific usage window.

The EH-TW650 bulb is rated to 4,500 hours in normal use, and 7,500 hours in ECO mode. Those that watch TV for approximately four hours per day should get through three years in normal mode before needing a £61.68 replacement. There is also an air filter for £19.53 that Epson recommends you swap out at about 6,000 hours, or more if you live in a dusty environment.

That works out at about £25 ($30) per annum. Not a disastrous amount, as projectors go.

However, there is another ongoing cost associated with this machine, and that’s the not insignificant power consumption. A typical 55in TV is around 180 watts, where the EH-TW650 needs a whopping 298 watts on 220-240 volts. And, in those locations that only offer 100-120 volts that demand rises to 325 watts.

Admittedly the EH-TW650 can generate a massive display, but using nearly twice the electrical power of an LCD TV could impact on the person who pays the utility bills. However, for occasional use, it isn’t something you’re going to notice.