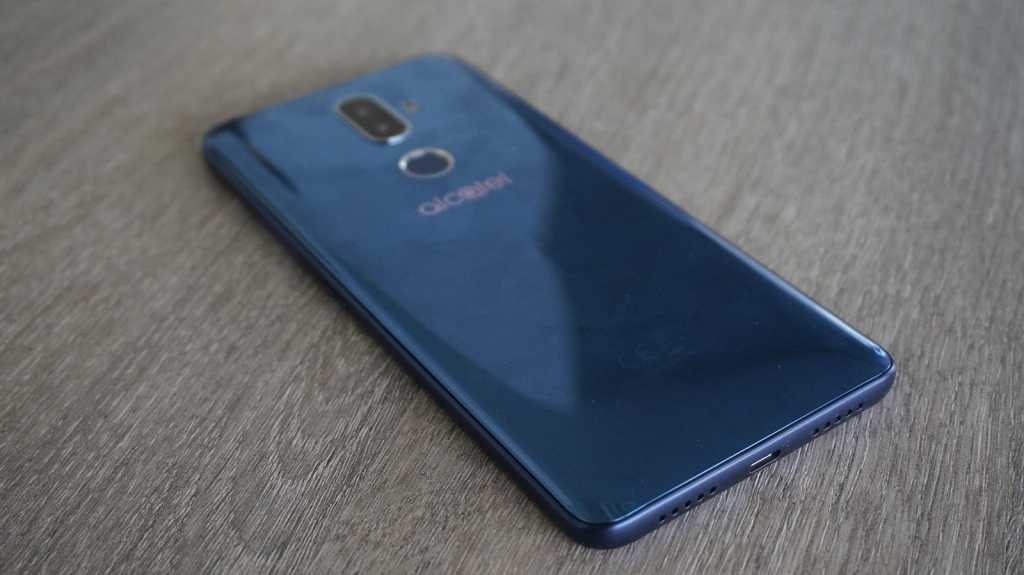 On the surface, the Alcatel 3V is a lot of phone for not much money. However, as is so often the case, it’s a little too good to be true. The design is attractive but feels cheap and somewhat plasticky in the hand. The screen is the highlight here which is large and crisp, the inclusion of a fingerprint scanner is nice too. Performance, though, is far from ideal and the cameras are difficult to get good results from. For many, this will be unacceptable but the phone is a good buy at the pay as you go price of £105. Otherwise, spend a little extra on the Moto G6 Play and you’ll be better off.

Smartphones have gone through a period of significant price rises recently, but you don’t have to spend over a grand to get one. Alcatel, known for offering phones at budget prices, has one for just over £100. Here’s our Alcatel 3V review.

Confusingly, there are no less than five different models of this phone: 3, 3C, 3V, 3X and 3L. The 3V is one of the highest spec options with the largest and highest resolution screen.

Although our budget phone cap is £200, it’s possible to spend a lot less. In fact, you can almost buy two Alcatel 3Vs for that much despite an RRP of £199.

The cheapest option is to go to Tesco Mobile where you can get the 3V for just £90 on pay as you go.

This price means the 3V’s direct competitors are the excellent Moto G6 Play and the Honor 7C and 7A. The odd thing is that the 3X, which has more storage and memory, is available from Amazon as a little less – £155.

At first glance, the Alcatel 3V is a nice looking phone. The front might be as plain as a white sheet, but the back has a style similar to much more expensive phones.

The dual camera module with fingerprint scanner nestled below gives off expensive vibes. However, the situation changes somewhat when you pick the 3V up – and not in a good way.

For a phone this big, the 3V is a little too light. We wouldn’t normally complain about a phone being lighter but at 155g, it gives the impression of cheapness – like picking up a dummy version of the phone that’s essentially an empty shell.

The rear cover might look like glass but it’s actually plastic so this also adds to the cheap feel. Furthermore, plastic or not, the Spectrum Blue model we looked at shows up fingerprints quite badly.

A modern 18:9 screen is one of the lures here and it looks nice, however, the bezels above and below are a little bigger than we’d like.

On the plus side, the 3V is reasonably thin and ergonomic to use. It also has a headphone jack unlike so many now.

On the surface, the Alcatel 3V has a decent set of specs and features for the price, but can it actually deliver?

The display is the highlight of the 3V. If you’re looking for a large screen on cheap phone then this is a great choice. At 6in, there’s plenty of real estate and it’s got a tall 18:9 aspect ratio conforming to the recent trend.

What’s surprising is the IPS panel providing good viewing angles and the unusually high resolution at Full HD+, it’s one of the crispest displays at this price point you’ll find. The Moto E5 Plus is also 6in but has a lower resolution.

It’s not overly vibrant in terms of colour and contrast but this is not exactly a big deal at this budget level.

Where the 3V falls down significantly is on the core specs and performance. It’s driven by a MediaTek MT8735A, a 1.4GHz quad-core processor and 2GB of RAM. The benchmark results don’t always reflect real-world performance, but they do here.

Even going through the setup process feels sluggish and things don’t exactly improve once you start using the phone. The interface often lags when doing basic things like bringing up the keyboard or scrolling through recent apps. It can be like the lag of phones from many years ago we thought we might be past now.

It’s mainly load times that are the problem as you’ll often be wondering if the phone registered your tap on an app icon. That said, things do run fairly smoothly once you’re going – even games like Super Mario Run are perfectly playable so you just have to grin and bear the initial lag.

Things would be improved by having a lower screen resolution, but mainly opting for stock Android (we’ll talk about software later).

There’s just 16GB of storage and with Android taking some of that space, you’re not left with much. A microSD card slot means you can add more but having a lot of things on this will make the phone run even slower.

As mentioned earlier, the 3V has a headphone jack and despite holes on either side of the USB port, there’s a single speaker that isn’t anything to get excited about.

That USB port is not the modern reversible USB-C like we’d hope for but the older Micro-USB instead. This is a shame but also perfectly understandable to keep the price down.

What’s more surprising is that the 3V has a fingerprint scanner which works pretty well. It’s set slightly back from the rear cover making it easier to find without looking.

You can also use Face Key to unlock the phone with your face but we’ve found this slow and unreliable so would advise against it – the phone also has a long disclaimer for this feature which doesn’t exactly instil confidence – for example, “Your device may be unlocked by a person or thing that looks like you”.

Like a lot of dual camera phones, the secondary lens is to offer a depth effect and Alcatel even touts re-focusing after shooting and real-time bokeh (or depth-effect). HDR is also an option which is good to see – you can see the difference in our gallery.

The camera app, like others on the phone, is slow to load and not the most intuitive to use either. You’ll learn where everything is eventually but the bigger issue is that it’s also slow to shoot (especially in HDR or Portrait), making it hard to capture quality results.

Overall, we have to say we’re not very impressed by the results from the camera with shots easily being far from ideal, especially with blur. You can get decent shots in good light, but you’ll need a lot of patients and a steady hand.

The depth effect is the headline feature here and you can use a slider to adjust the effect but it’s best in simply auto-mode and with you getting nice and close to the subject. Otherwise, we’ve found it very hit and miss.

At the front there’s an 8Mp camera which is not bad at all and there’s even an LED flash should you need it in darker conditions (and you don’t mind flash photography). This is limited to 720p video.

A 3000mAh battery is the average size for a modern smartphone, based on the many devices we’ve seen and reviewed. It should be enough to last through a normal day of usage for most users and you’ll need to charge every night.

The lack of wireless charging is a given at this price but it’s a shame to see no form of fast charging whatsoever, especially when the Moto G6 and E5 phones support it with some even having the charger included in the box.

You’ll need to get used to hours of charging with the 3V.

It’s great to see the 3V with Android 8.0 Oreo but it would be much better if Alcatel decided not to add on its Joy user interface.

The Android skin brought us minimal Joy as we found it overall childish in style, laggy in performance and little confusing to use.

There’s not too much bloatware fortunately, with Facebook, Office Suite, Netflix and some of Alcatel’s own. But there are odd things like a constant notification for NFC and a regular pop-up about tomorrow’s weather.

A Multitask feature is supposed to allow you to use two apps on the screen at the same time but tapping the button from recent apps (on an app that supports it) simply does a pop-out smaller window view instead.