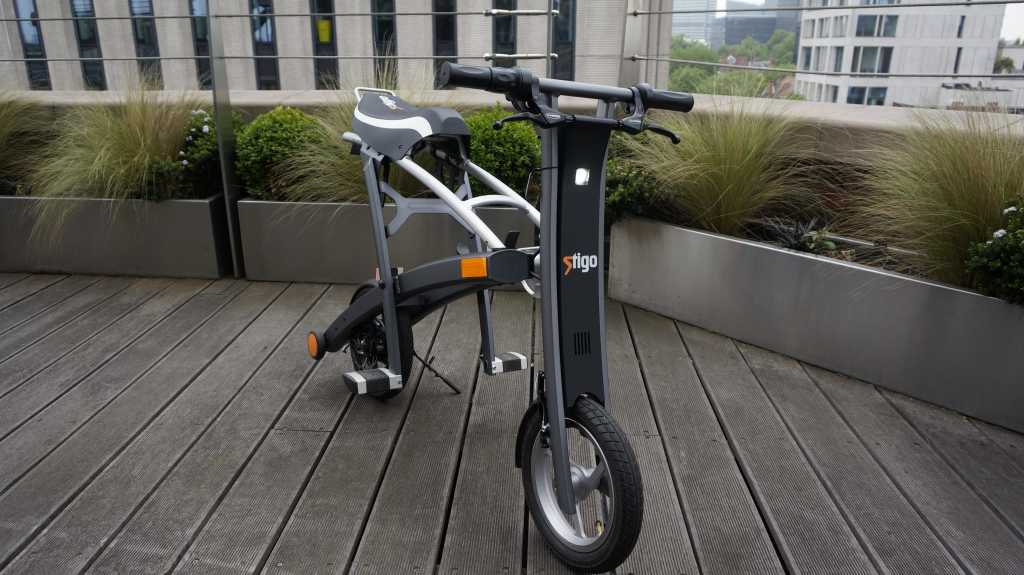 The Stigo Bike is the ultimate electric scooter for those that live and work in busy cities. The Stigo has the speed and range to be able to replace your regular commute while also helping to keep the roads clear and the environment healthy. The ability to fold the bike down (and so quickly) is the main draw of the Stigo, and it works incredibly well. Within seconds of arriving at your destination, your bike will be folded up and pulled along behind you. And beyond the sheer convenience of the folding bike, it’s incredibly fun to ride and will put a smile on any rider’s face, whether 16 or 60. The only downside is the price, especially when you consider that (unlike standard electric bikes) you’ll have to pay for tax and insurance to ride it on UK roads.

Following an initial reveal back in 2013, the Stigo Bike is now available to buy from select retailers in the UK. The electric scooter/bike hybrid offers a great, fun and efficient way for city dwellers to get around without relying on public transport or cars. With speeds of up to 15mph and the ability to fold down in two seconds flat, the Stigo Bike could be the ultimate vehicle for those that live and work in busy towns and cities.

Does the Stigo Bike have what it takes to be crowned the best electric bike of 2018? Find out in our review.

The Stigo Bike isn’t the cheapest electric bike/scooter on the market, that’s for sure. It costs around £1,449 in the UK, and can be picked up from a variety of specialist retailers including e-Goes, Universal Store London and Speedy Feet. Those in the US can also pick the bike up for around $1,399 from the likes of Bikemania and Kukara.

For reference, that’s around the same price as the Volt Alpine electric bike that can be used on UK roads without requiring insurance, tax and other official DVLA paperwork.

Trust us when we say that you won’t have seen anything quite like the Stigo Bike before, both in terms of design and functionality.

The Stigo Bike is generally quite small when compared to similar bikes and scooters on the market – so small, in fact, that you might think you’re a little bit big to ride the bike, but it’s generally not the case. Despite a relatively small frame and small tyres, it was comfortable enough for us (at 6ft2) to ride over long distances without any issues. 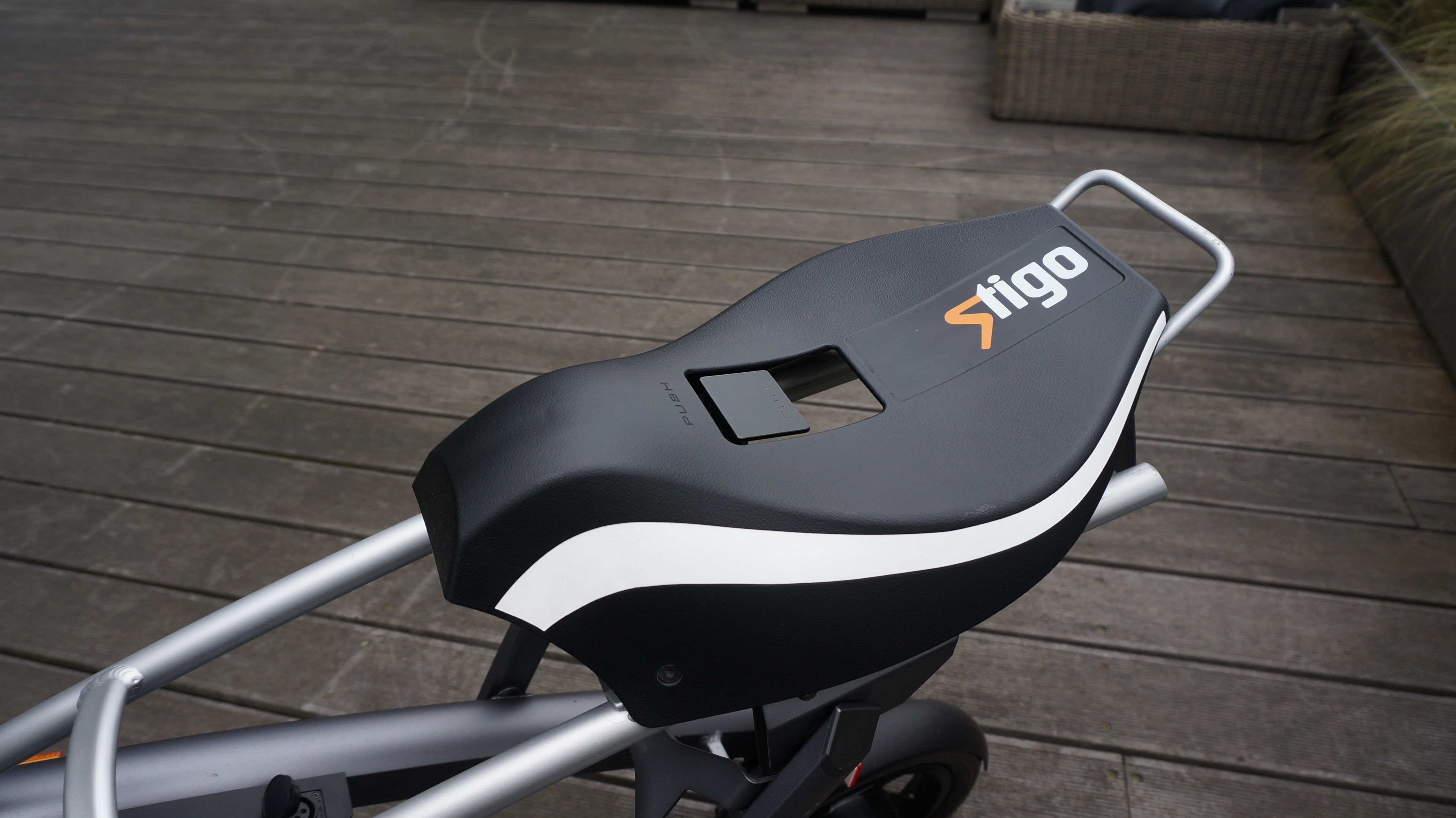 You’ll find a wide, plastic seat on the bike that does look a little unwelcoming at first glance. But surprisingly, it’s actually more comfortable to sit on than the majority of bike seats – it’s wide and flexible, and provides enough ‘give’ that you don’t get uncomfortable very quickly. This is accompanied by fixed pedals that give you a nice platform to rest your feet on when riding.

On the handlebars, you’ll find a twist-throttle to control the amount of power provided by the electric engine, along with brakes on either side and a horn button. Yes, that’s right, the Stigo Bike has a built-in horn and believe us when we say it’s as loud and terrifying as a car horn (especially when you accidentally hit the button!).

Just below the handlebars is where the smart stuff is housed; you’ll find not only a large black display that’ll show you how fast you’re going and your current battery life, but a special anti-theft feature. 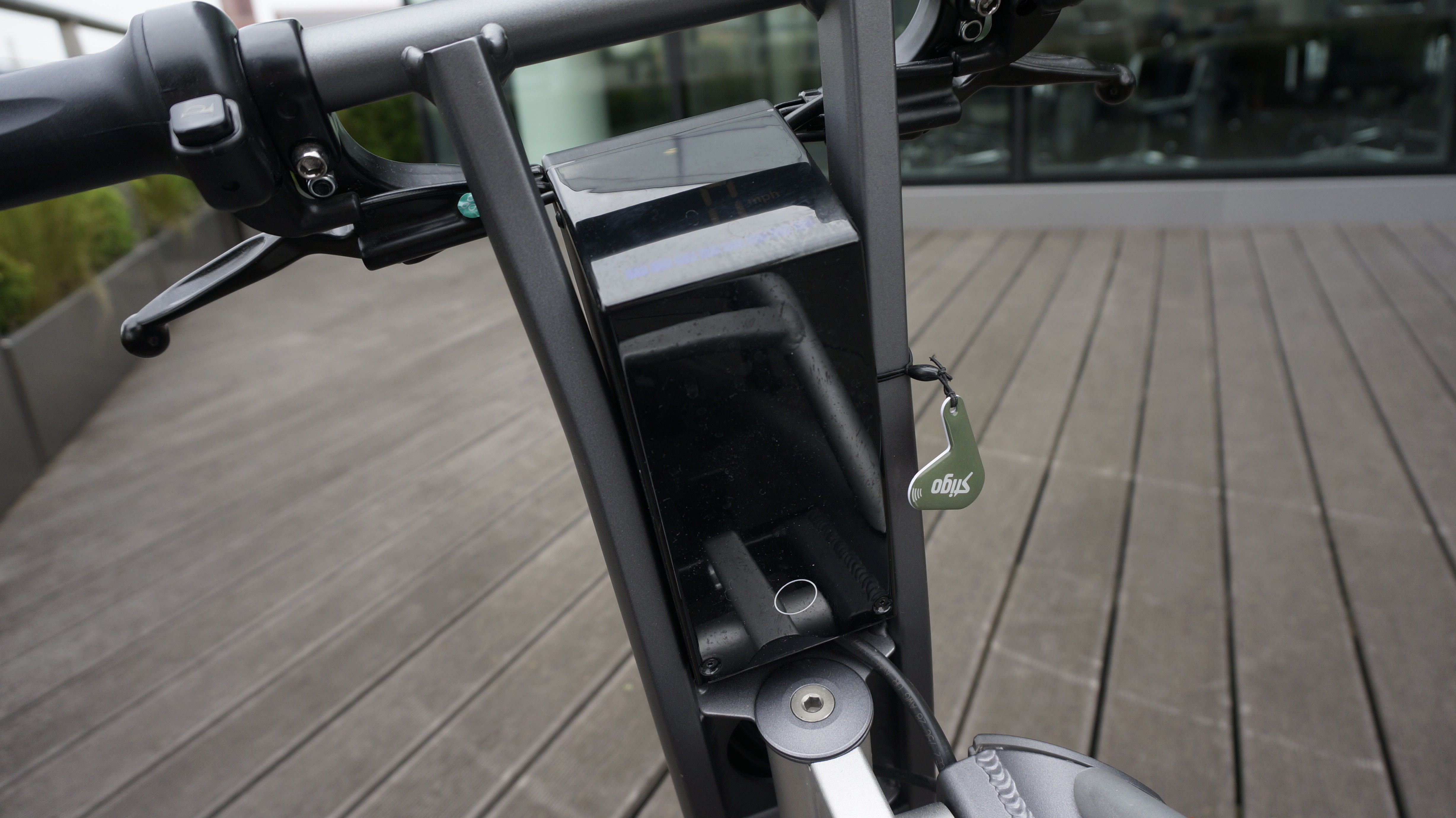 When you first turn the bike on, you’ll see a little white light appear on the display, but the bike will be largely unresponsive. The only way to unlock the bike is to do so by tapping the provided RFID tag on a dedicated area on the display unit. Though we wouldn’t chain up the bike and leave it (in London, anyway!) it’s a nice touch for safety-conscious bike owners out there.

The main feature of the Stigo Bike, though, is that you can fold it down in two seconds. Literally. This means that you can use the Stigo Bike to get to the train station and instead of having to leave it locked up for potential thieves, you can fold it up and pull it along behind you like a suitcase. We’ve taken it on the buses and on the tube in London with no real complaints, and it’s a better option than traditional folding bikes.

It’s a simple mechanism; lifting a latch at the back of the seat folds the seat and frame down while pushing out special luggage wheels, while another latch loosens the front wheel and allows it to be folded into itself. What you’re left with is a tall-but-not-wide frame similar to that of a golf bag, complete with a handle and wheels to pull it along so that you don’t have to carry the 14.1kg bike. It can stand by itself, both when folded and unfolded, making storage fairly easy whether at work or at home. Convenient, right? 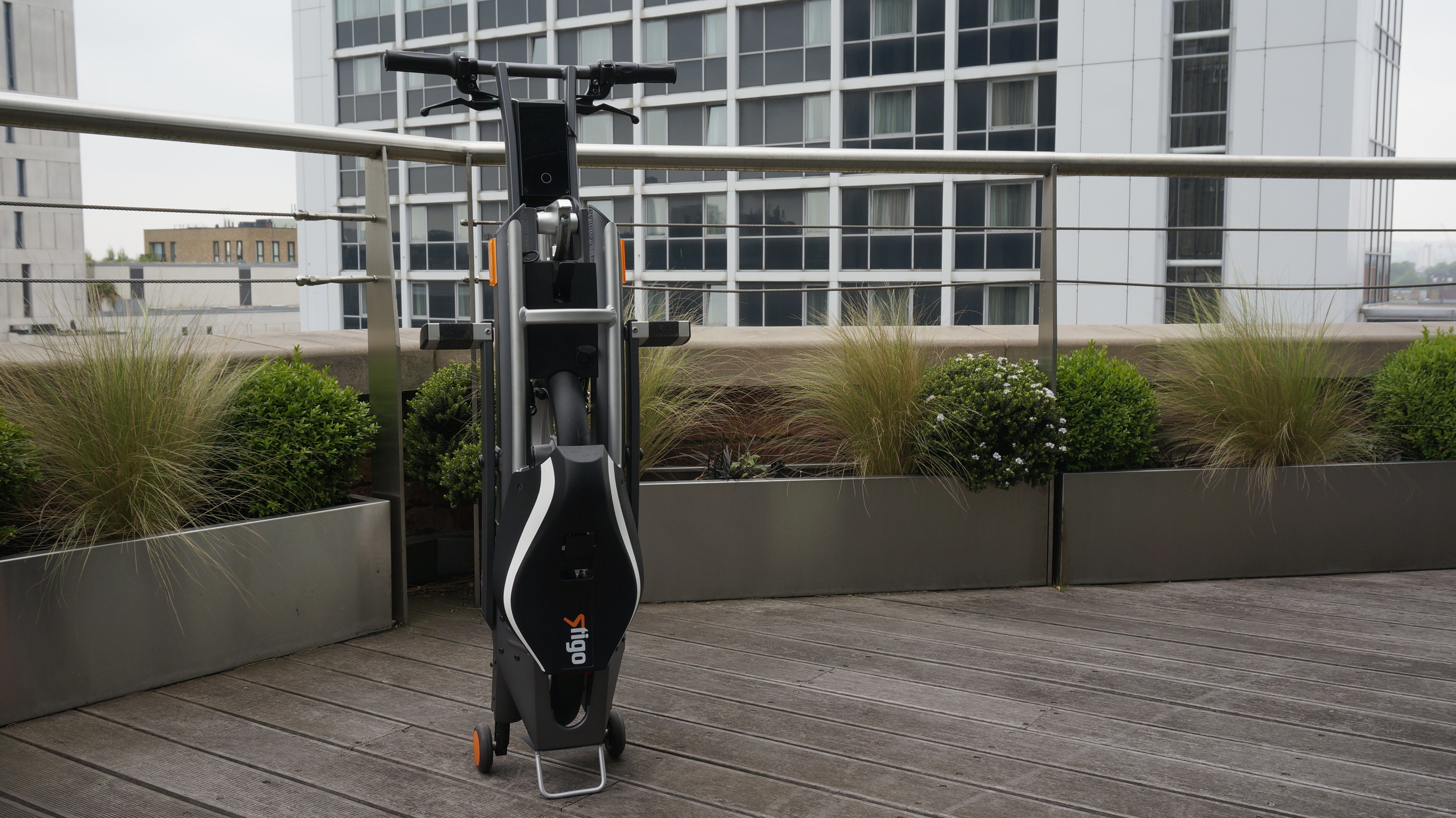 We’ve had plenty of confused and fascinated looks from Londoners as we’ve folded down and set up the Stigo Bike outside various train stations, and they all say the same thing; it’s a game-changer. It makes commuting in large cities like London an absolute breeze, while also helping to combat over-congested roads and traffic jams. We’re infatuated with the design and the convenience, but admittedly, the design isn’t perfect.

While it’s easy to fold down, we’ve found that the Stigo Bike rattles quite loudly as it’s being pulled along. This will, of course, depend on the surface of the path, but we can say that based on our experience in London, you’ll hear it more often than you’ll not. It does detract from the overall sleek, premium look of the bike. Thankfully, the rattling subsides when the bike is unfolded, and you don’t suffer the same issue when riding the Stigo. 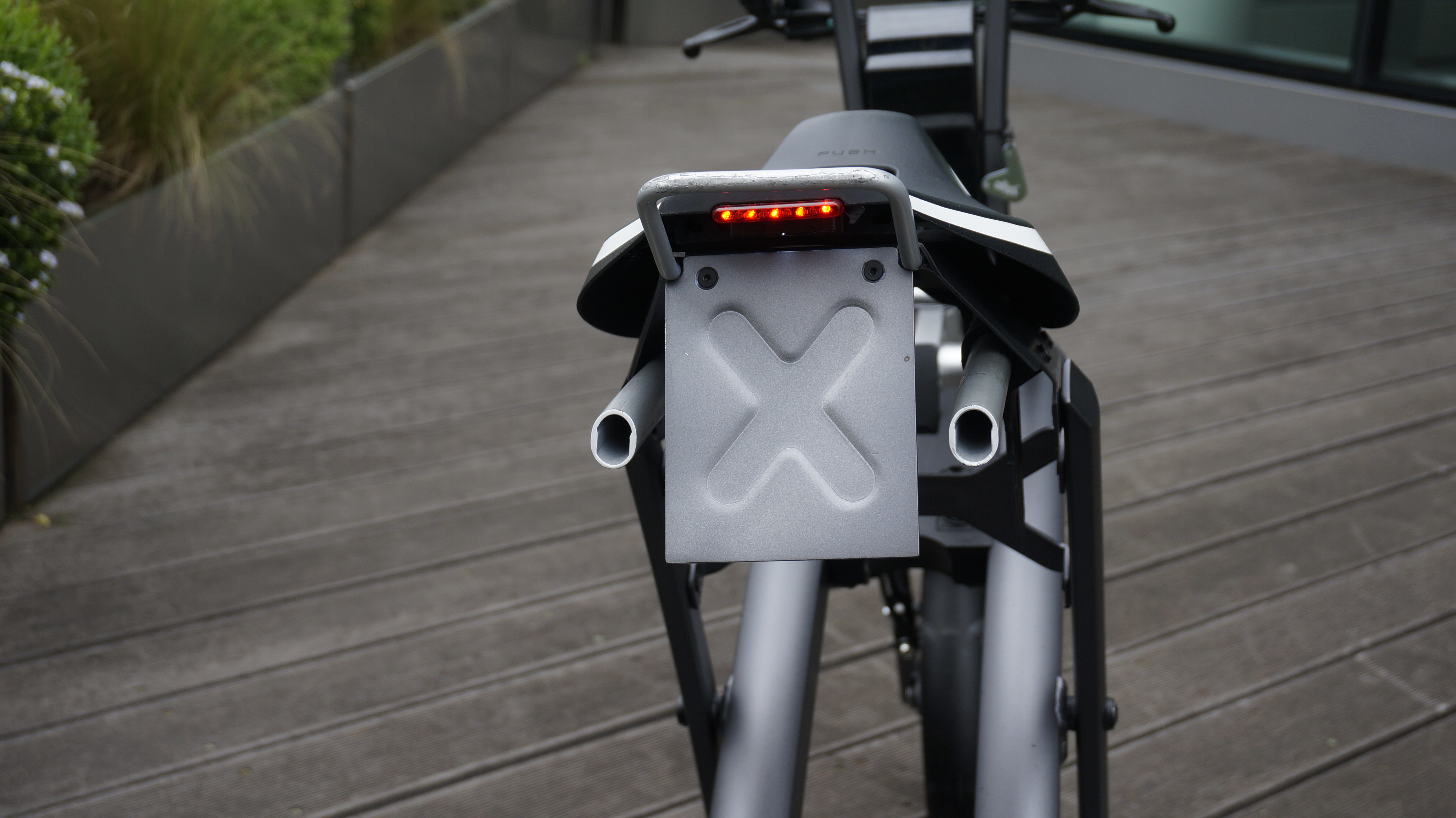 The Stigo Bike also features a bright LED light on the front of the bike, and a brake light on the rear. The headlight is always-on by default and though there is no button control like with the horn, you can toggle the headlight on via the Stigo Bike app. What would’ve been nice was the inclusion of an ambient light sensor that’d automatically turn the light on and off as needed – especially when you consider the high-end price-tag of the bike.

The Stigo Bike app is useful for much more than simply toggling on the headlights too; you can unlock the bike if you lose your RFID tag (as well as using it to register new ones to your bike), track your journeys using your smartphone’s GPS and activate the horn remotely (in case somebody gets a little too close to your pride and joy!).

Admittedly it’s kind of a novelty as there’s not much that you need the app for, but it’s a nice touch and can provide a bit of an insight into your riding habits. 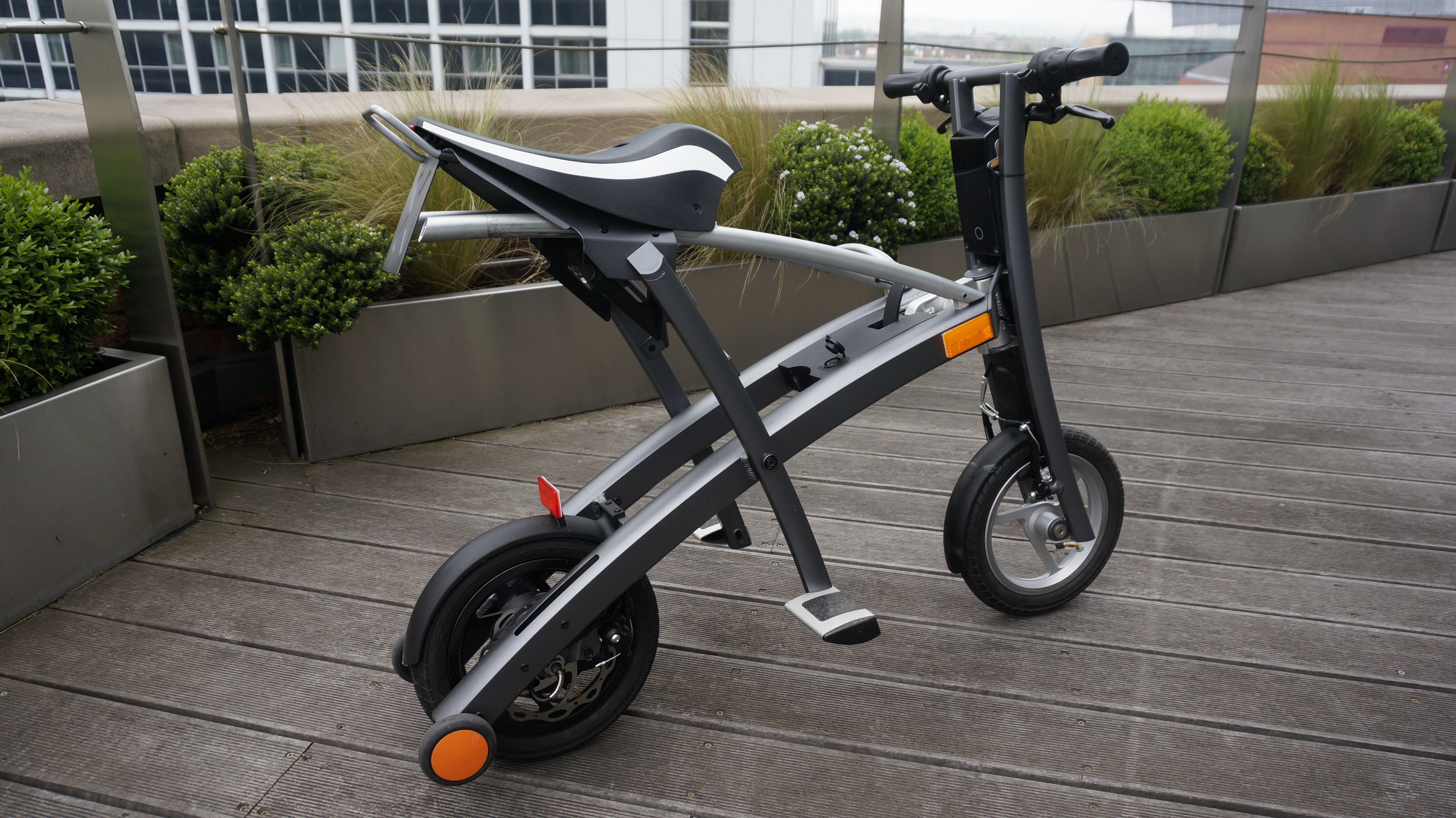 While it’s impressive in the design department, how does the Stigo Bike perform? It can look stunning, but without the power to back it up, it won’t be a great form of transport. Thankfully, the Stigo Bike is a great blend of design and power, offering speeds of up to 15mph and a range of up to 25 miles, though that can vary depending on multiple factors (weight, speed, road inclines, etc).

What does this mean to you at home? The Stigo Bike is incredibly fun to ride, whether you’re new to the world of electric bikes and scooters or whether you’re a hardcore motorbike fan. It’s intuitive, thanks to the grip throttle, and the use of a full brake disk on the rear wheel means that you can stop quickly and safely in case of emergency. It’s a nippy little thing with decent torque, and can easily pull away from a standing position without any help whatsoever.

Essentially, once you’ve used the Stigo Bike, you won’t want to go back to walking and driving around the city. It’s convenient, safe and most importantly, it’s fun. We felt like kids riding the Stigo Bike, wanting to take it everywhere with us, and that’s not something that even the hoverboards could achieve.

If we had to point out one flaw in the Stigo’s performance, it’d be that the bike has a rather large turning circle due to restricted left and right turns. In fact, it’s so wide that it’s actually easier to stop, pick the bike up and turn it around yourself than attempt a proper U-turn. It’s a good thing the bike is so lightweight! 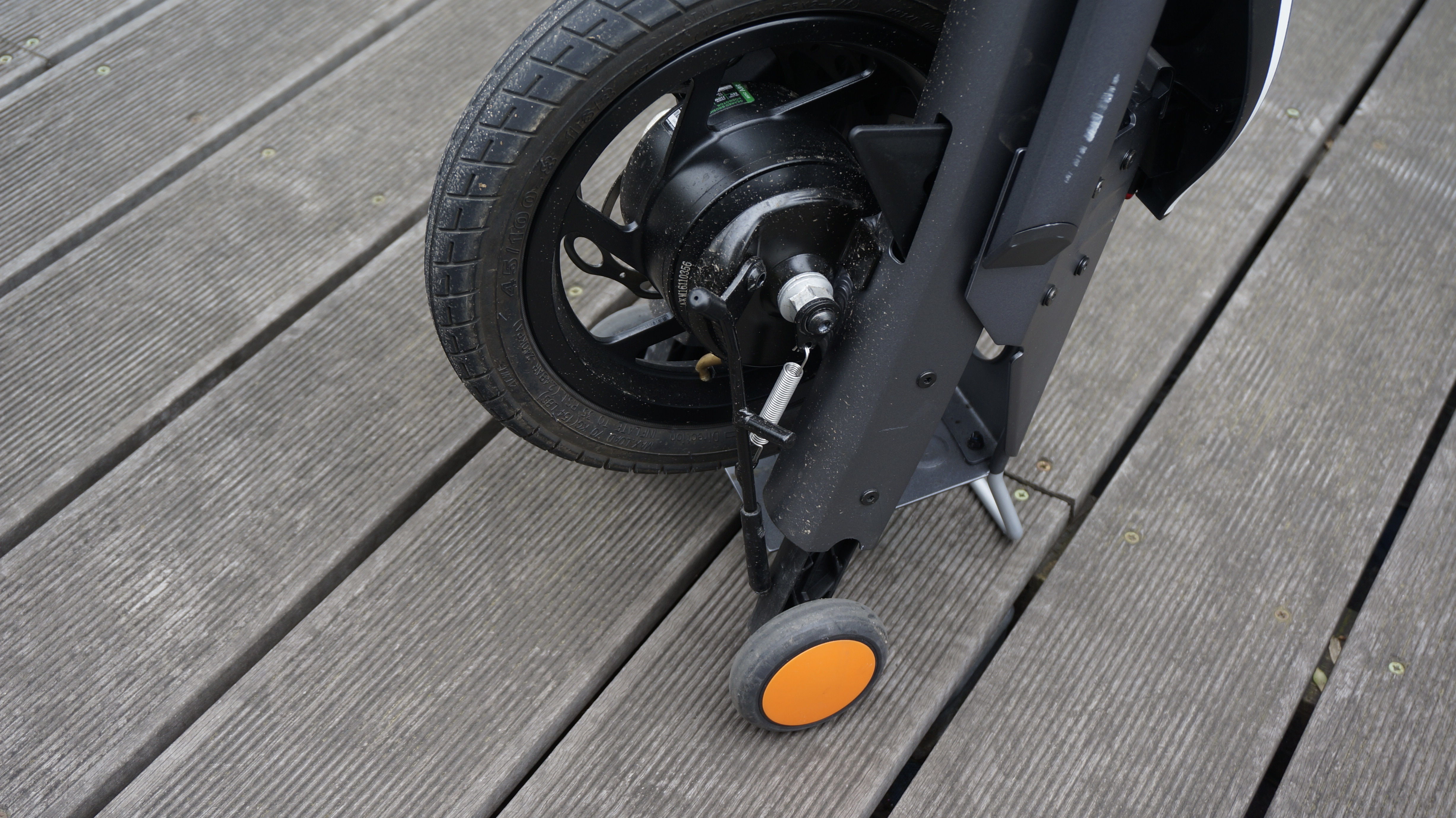 Is the Stigo Bike legal in the UK?

While there may be some confusion about electric bikes and scooters in the UK, we can confirm that the Stigo Bike is legal for use on UK roads – but there’s a catch. It’s not registered as an “electrically assisted pedal cycle” due to the use of fixed pedals and, per UK law, if a vehicle features an electric motor and fixed pedals, it falls under the L1e category of vehicles.

The L1e category refers to electric scooters, which in terms of the UK law, are much like mopeds. They’re road legal, but riders need to be 16 or over with a valid provisional driving license, must display L-plates after being granted a CBT and must have tax, insurance and a license plate. There are other rules too, which you can find out about here.

Essentially, you can ride it around like a moped in the UK and Europe, but you’ll have to get registered with the DVLA and jump through some hoops first.