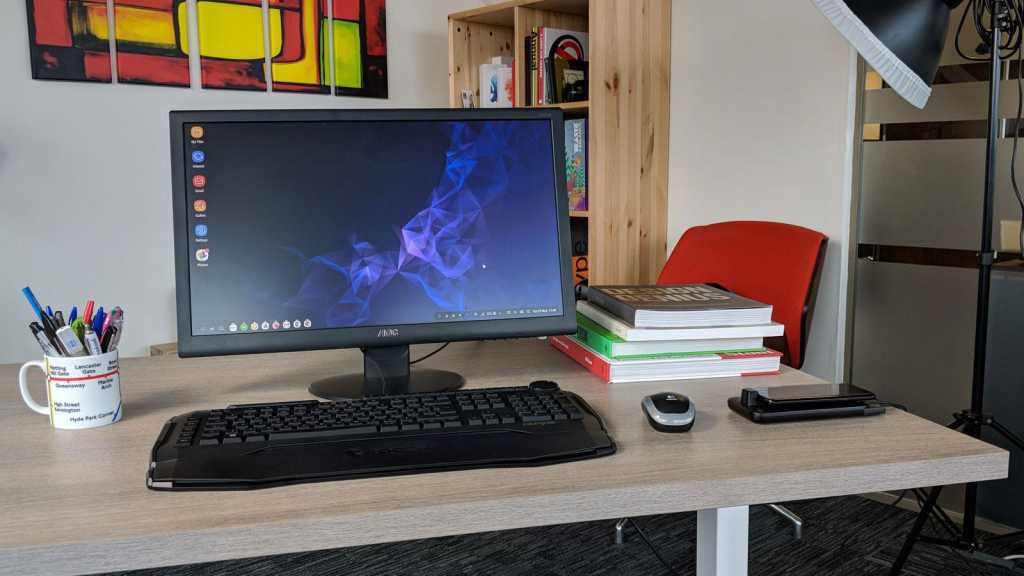 The DeX Pad is a functional external display solution for business users who want to do presentations on the fly from their Galaxy S9, check email or word process on a larger screen with a plug and play attraction. It’s Samsung trying to convince business to hand out S9s rather than iPhones to employees. For the casual consumer who thinks a DeX Pad is an alternative to splashing out on a PC or iMac – sorry, this isn’t the case. Performance is slow thanks to the phone hardware and reliance on a data or Wi-Fi connection. It’s handy for watching films, word processing and email but using it day to day is too frustrating an experience to fully recommend.

The Samsung Galaxy S9 and S9 Plus are two of the most popular smartphones on earth. The DeX Pad is an official accessory that helps turn the phones into a working desktop computer, but no one really talks about it.

While it is a niche use case, the DeX Pad is an intriguing prospect. Much like the ill-fated Microsoft Display Dock, it uses the computing power of a smartphone to project apps onto a Windows-esque desktop. Just remember you at least need a monitor and keyboard, and there are some things you have to sacrifice when you’re still working with smartphone apps.

Mobile Fun supplied us with a unit for review, and also sells it at a  discounted price of £75. This is a decent price if you think the return will be worth it.

The DeX Pad isn’t a very sexy piece of hardware. It’s a plain black plastic block that sits face down on a desk. You then slide your S9 or S9 Plus (other Galaxy devices aren’t compatible with this latest version) into the USB-C connector for it to act as a mousepad.

This is a product that is purely function over form. There’s nothing much premium about the Pad on which you slide your most premium Galaxy S9.

This isn’t a standard dock design though as you can’t stand it up. The phone is intended to stay flat so you can optionally use the inserted phone as a trackpad, and Samsung suggests you take the phone out of any case before docking to ensure a decent physical port connection.

On the back of the DeX Pad is input for power via USB-C, HMDI and two USB-A 2.0 ports for attaching the necessary keyboard and optional optical mouse. There’s also a built-in fan to keep your phone cooled down, but this does give away how hard the set up will push your device.

On its own, the DeX Pad is an uninteresting black slab. In use, it fairs better.

If you’re au fait with technology then you should be able to set up the DeX Pad straight out the box without the instructions. It’s a simple case of power in, connecting a display via HDMI, and connecting a keyboard via USB.

Once plugged in, the DeX Pad automatically displays your S9 on the monitor as a Windows style desktop experience. This is not Android blown up, this is a clever OS change from phone to screen where you access all your apps in a familiar Windows desktop presentation.

If you do want Android though, there is a screen mirroring mode that does display your phone on the external display as is. But the utility of DeX is all in the desktop mode.

You can connect via HDMI to a TV or monitor and technically this is all you need to get the DeX Pad working for certain use cases. If you just want to use the DeX to view or watch content or make a presentation, for example, then a display will suffice.

Using the phone as a trackpad, you can navigate around apps and cycle through slides or pages. Should you need to input text, the DeX senses there’s no keyboard attached and displays a virtual one on the external display.

Input is very fiddly – you will want to attach a keyboard. Luckily via USB-A, this means pretty much any keyboard on the market will work (and did work in our tests). Wireless Bluetooth keyboards also worked, as did most – but not all – mice. To be on the safe side, you will want to use a simple mouse rather than a specialist gaming mouse, for example, which didn’t work properly for us.

Using apps is also a mixed bag. Stock Samsung apps work best and can display full screen, as can Google apps. But you end up with a lot of white space if you view, for example, the setting menu full screen. And apps like Instagram, where you might want to view photos larger, are incompatible and display like this:

As there’s a lot of computing conversion going on here in order for Android to display like Windows, there are also some performance issues. This is not like buzzing around on a high-end phone.

The cursor often lags, load times are oddly often slow and we felt, using a Galaxy S9, that the 4GB RAM was being pushed to its limits. You’ll have a better time on the S9 Plus with its 6GB RAM.

Don’t forget also that this is down to the reliance of mobile data or Wi-Fi for Internet access. There’s no Ethernet port here, so the phone is working overtime to convert Android into another OS on the display as well as use data. No wonder the DeX Pad has a fan to cool the phone down.

Whole apps largely behave, we found some syncing didn’t always work, particularly trying to use some service within Chrome like you would on a Mac or Windows desktop.

We use Google Sheets a lot within Chrome, but loading up on Chrome on DeX didn’t sign us in. A pop up prompted us to ‘use the app’ but that button was unresponsive when clicked. We had to manually exit Chrome and load the Sheets app instead to make it work.

It’s small compromises in compatibility like this that make the DeX Pad difficult to recommend as a full desktop replacement – you won’t want to sacrifice the performance or usability that it unfortunately does.

Largely speaking, Samsung, Google and web-style apps (like newspapers the New York Times and the Guardian) are responsive, meaning you can adjust the window size. Others like Instagram (as mentioned) and third-party apps for podcasts and the like are not.

Largely speaking, if the app has a primary desktop equivalent (eBay) the app is responsive, but other that exist mainly as apps (Deliveroo, Citymapper) will be small windows. Granted, the target audience for the DeX Pad is business, so it won’t matter that Deliveroo or Instagram displays this way. But for casual users it’ll limit the appeal – you will not want to game on this.

This is the crux of the DeX Pad, and why Samsung has made less of a song and dance about it this year than it did with the different DeX dock for the Galaxy S8 line. The DeX Pad’s use case is more niche than it first appears.