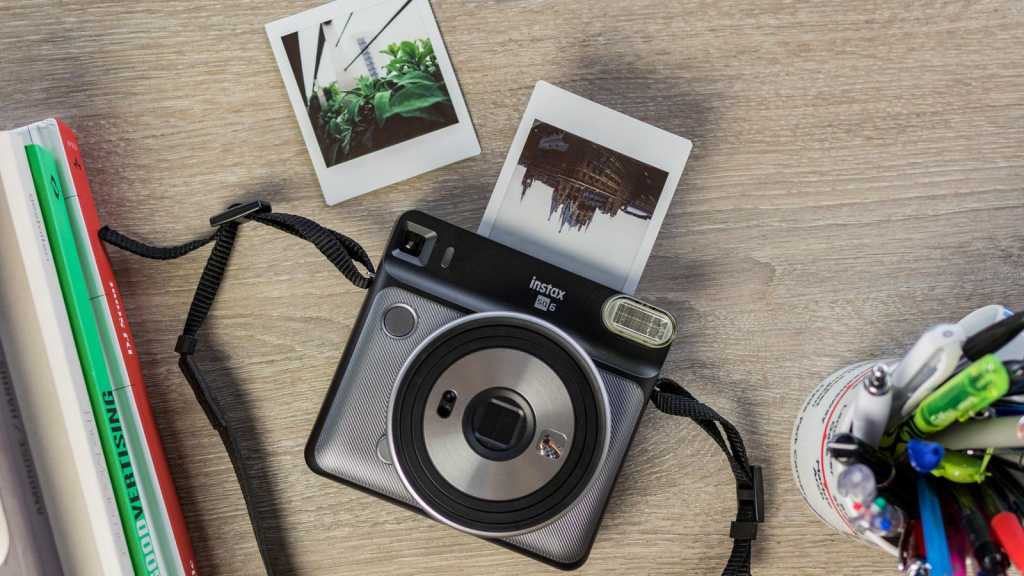 An attractive, retro-tinged design and solid feature set are enough to make the Instax SQ6 an easy recommendation – throw in the low price point and it becomes one of the best instant cameras on the market right now. If you want to shoot square format instant prints without breaking the bank, this is probably the camera for you.

Instax boasts that the SQ6 is its ‘first square format analogue instant camera’, which might confused anyone who remembers the Instax SQ10 – but since that was technically a digital-analogue hybrid, we’ll let Instax sneak through on a technicality.

The SQ6 then is a straight-up analogue instant camera, taking the Polaroid-esque square format Instax film and sticking it in a classic analogue camera, complete with a retro design, an impressive feature set, and a very attractive price.

That makes it the cheapest camera around right now that uses the Instax Square format – massively undercutting Instax’s own SQ10 ( £219/$279) and even the similarly specced Lomo’Instant Square ( £179/$239). The next camera in the Square range is rumoured to be the Instax Sqaure SQ1.

As with any instant camera, you also have the film itself to consider. Prices can vary a lot, but Instax Square film tends to run slightly more expensive than the smaller Instax Mini format. At the time of writing, prices are around £8.99/$12.50 for a pack of 10 shots, though prices tend to drop if you’re willing to bulk-buy.

Instax has also used the new camera as an excuse to launch packs of square film with a black border, with an official price of £9.99/ $14.99 for 10 shots.

Note that there’s no film included with the camera, so you’ll have to buy at least one pack from the get-go if you want to use it immediately.

The Instax SQ6 is defiantly in the latter camp, embracing old-fashioned aesthetics with a chunky design that’s most reminiscent of the company’s previous Instax Mini 90 model.

The super-sized lens housing extends out when you turn the camera on, while the hefty flash also juts out from the main body. On the back, there’s a slight lip to the battery compartment (two CR2 batteries, included) which serves as a comfortable grip for the main body, while the slightly ridged rear also helps you keep a tight grip.

Buttons are simple: the shutter button sits next to the lens on the front, the power slider is on the top of the body, and on the back you’ll find another three controls: one button to cycle through the various camera modes, one to turn on the timer, and one to disable the flash. Beyond that there are LEDs to let you know which mode you’re on, an analogue ticker to tell you how many shots are left, a selfie mirror, and that’s basically it.

We’ve reviewed the Graphite Grey model, but you can also get it in Blush Gold and Pearl White – the only changes being to the colour of the area around the main lens, and the power button on the top.

It’s a simple design, but it looks great, and the introduction of a few modern touches means the SQ6 is less achingly retro than the faux-leather coated Mini 90. This feels like one of the first instant cameras to successfully bridge the gap between its vintage roots and the modern market – along with the much pricier Leica Sofort, our current favourite.

As we said earlier, with the SQ6 Instax has returned to its analogue origins, ditching the digital hybrid features of the SQ10. That means no microSD storage, no fancy filters, and no snazzy effects – beyond what you can do with old-fashioned light and film.

The SQ6 has a good few modes to choose from. The default is auto exposure, which is your basic point-and-shoot mode, with refinements designed to brighten both the subject and background of photos.

We found it gave us crisp, clear photos, with some of the brightest colour reproduction we’ve seen in an instant camera to date. Plenty of instant cameras give slightly faded shots which, intentionally or not, echo the look of faded Polaroid prints. By contrast the SQ6 gave us colours closer to a good phone camera – which may or may not be what you want from it.

Beyond the default mode, you get selfie, macro, and landscape modes, each of which has brightness and focal length tuned for their purpose. Then there’s double exposure, which lets you expose a shot twice, to overlay one image on top of another, and lighten and darken modes so you can play with lighting too.

If those aren’t enough options for you, Instax also throws in three colour filters: orange, purple, and green. Here the chunky flash really makes sense, as the filters are solid bits of plastic you can clip on top of the existing flash, rather than the flimsy gel filters you get with Lomography’s cameras, which have always felt like the sort of thing you’ll lose within a week of owning the camera.

If you’re looking for a square format Instax camera, the SQ6 is easy to recommend. It’s half the price of the clunky SQ10, and only a fraction more than Polaroid’s own OneStep 2, which uses more expensive prints.

The closest rival is the Lomo’Instant Square, which we’re also big fans of. That packs in more features (extended exposures, multiple exposures, and an optional attachment to print in Instax Mini format too), but you’ll pay a good chunk more for it – we suspect most users will be totally happy with the core features of the SQ6, and it’s only serious photography nuts that will get their money’s worth out of upgrading to the Lomography.