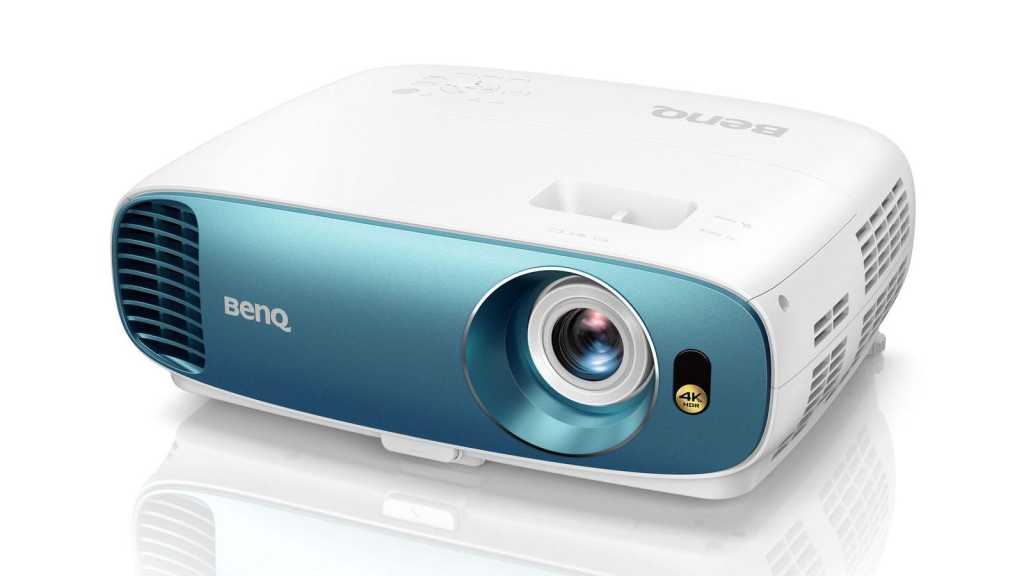 This projector might not be strictly 4K, but the projected results can certainly emulate that experience quite effectively. Well balanced output, decent colour representation and plenty of lumens to combat ambient light. At this price point calling it ‘budget’ seems silly, but for those building a home cinema system this borders on affordable.

Projectors have lagged behind somewhat from an output resolution perspective. Where LCD TV technology has left everything lower than 1080p far behind, projectors have struggled to keep pace with the 4K revolution.

The BenQ TK800 is built specifically for those with home cinema aspirations are looking for something better than a 1080p projector, such as the Epson EH-TW650. A solution they can use successfully for 4K live broadcasts, movies or gaming.

The UK pricing for the TK800 is £1,198.99 from Amazon, and at this time it isn’t sold directly through the BenQ online store.

In the US a TK800 costs $1,499.99, almost the exact dollar/pound exchange rate. It might be possible to find it cheaper, but that’s the standard price that is on Amazon.

At the top of the list of competitive devices comes BenQ’s own HT2550, the previous design that has marginally better colour representation, but a lower power lamp.

It should be stated that none of these devices are native 4K, and they mostly offer less lumens than the BenQ TK800 has.

There is something vaguely familiar about the TK800 we realised when we unpacked the review model. It is almost identical to BenQ’s previous HT2550 model, with the major difference being the blue fascia.

The choice of that colour is unusual and reminded us of something from a seventies Christmas decoration. It’s certainly striking, but not everyone will love it.

It doesn’t exactly break new ground in projector ergonomics, either. The optical system has a zoom and focus wheels, all the inputs are on the rear and there are menu navigation controls on the top surface.

While they are outwardly similar, the TK800 takes much of the physical structure from the HT2550, but swaps out the colour wheel for some alternative technology and also boosts the available Lumens to 3,000 from 2,200 before.

The diametrically opposite of portable, this is a large device that can be used either as a front or rear projection when placed on a table or ceiling mounted. It isn’t a short throw projector, having a throw ratio that depending on the zoom slides between 1.47 and 176:1.

In this reviewer’s home that capped the size of the image available to 100 inches (at 3.25 meters), although with bigger rooms the TK800 is built to generate a massive 300-inch projection.

BenQ included a nicely made remote control which features backlit keys, and significantly more buttons than are on the projector.

That last option is entirely out of place to our mindset, because VGA doesn’t support 4K and any computer that only has it as an output choice would ancient.

Also, only one of the HDMI inputs is 2.0 spec. Limiting 4K resolutions at 60Hz to a single input, as HDMI 1.4 on the other port doesn’t support better than 4K at 30Hz.

Why those designing it didn’t ditch the VGA and give this two HDMI 2.0 spec ports is annoying, because having only one port that does 4K in 60Hz means that a HDMI switcher will be required for those with any combination of cable, console, computer and Chromecast Ultra to connect at the same time.

The USB port scenario is also less than ideal.

There are two USB ports; a Type A and a Type mini B. On other, usually business projectors, at least one of these would allow you to present various file types without a computer/console, but in this design that feature was never considered. The mini B is purely for service diagnostics, and the Type A is only to provide power if you have a Chromecast or something similar connected.

But, the first question that most people will ask about this product will be is it truly 4K?

The documentation that we got from BenQ about this projector claimed it has a natural resolution of 3840 x 2160 or ‘True 4K’ as it is referred, but a deeper dive into the details reveals that definition is more marketing than certified.

At the heart of this projector is DLP XPR Technology, created by Texas Instruments to enable lower resolution chip that uses pixel-shifting technology to achieve the 8.3 million pixels needed for 4K.

The concept of pixel shifting has been around for a while, first appearing on camera sensors. What the system does is moves the sensor half a pixels width, to effectively double the apparent resolution by creating overlapping data in successive frames.

So is this a real problem or a prosaic one? That entirely depends on how sharp you like the image.

Because however you dice things, pixel shifted 1080p is never going to look as sharp as native 4K. But equally, if you are watching a movie or a rapidly moving game output at distance, and not still 4K images with single pixel thick lines, you well might not notice.

And, at least this system is 4K certified, compared with some ‘4K Enhanced’ designs that forget about half the pixels in each frame.

Our take on this is that the BenQ TK800 looks better than a standard 1080p DLP projector, but lacks the fine details and clarity of one with an actual 4K DLP.

If you want a 4K DLP projector, be prepared to pay three times the cost of this, and possibly even more.

Having accepted that Pixel Shifting is part of the TK800 equation, the output from this projector is exceptional in many respects.

As this hardware is designated as HDR, the colour representation is important and the BenQ engineers managed a product that achieves 92% Rec.709 coverage with ‘Decent Brightness’ as the promotional material puts it.

That’s a good gamut, but it is also about 3% less than the prior BenQ HT2550 offered. This is undoubtedly the flip-side of having more lumens, as the brighter the lamp the more it appears to degrade the colour accuracy.

We need to point out that you can’t get a projector with 100% coverage for less than 50 times as much as this, therefore it’s not an issue that is easy to engineer away.

Another factor in this may be the colour wheel, that uses four elements; RGBW. The ‘W’ designates an entirely clear segment, and on some projector designs this approach can cause issues.

With that section clear, almost 100% of the light from the bulb passes through, where any pixels with colour components will be by definition less bright. We’re not sure how BenQ engineers achieved this, but they avoided creating overly ‘hot’ highlight areas, balancing the brightness correctly from deep colours to brighter sections.

This is especially impressive if you activate the HDR functionality, and have a computer or games console that can generate enhanced dynamic range output.

BenQ quotes 3,000 lumens, and in our testing it exceeded those numbers marginally. This makes it perfect for those locations that aren’t entirely devoid of ambient light, or outdoors at night with the biggest possible screen size.

One caveat here is bulb life, at just 4,000 hours of ‘normal’ use. That’s three years use of four hours a day, and you can double that lifespan using SmartEco mode.

And another issue is the light leakage around the image. Because the masked area around the projection isn’t entirely light free, creating a slightly dark grey frame bounding the projection.

When you initially run the projector the grey frame can be a distraction, but as your eyes accommodate the new lighting conditions it seems less of an issue, and you rapidly forget about it.

Overall, the TK800 is a major improvement over the best 1080p projectors, even if it isn’t the full 4K El Dorado. There are things we’d change about it, like the HDMI port selection, and that blue facia, but it has many strong points too.