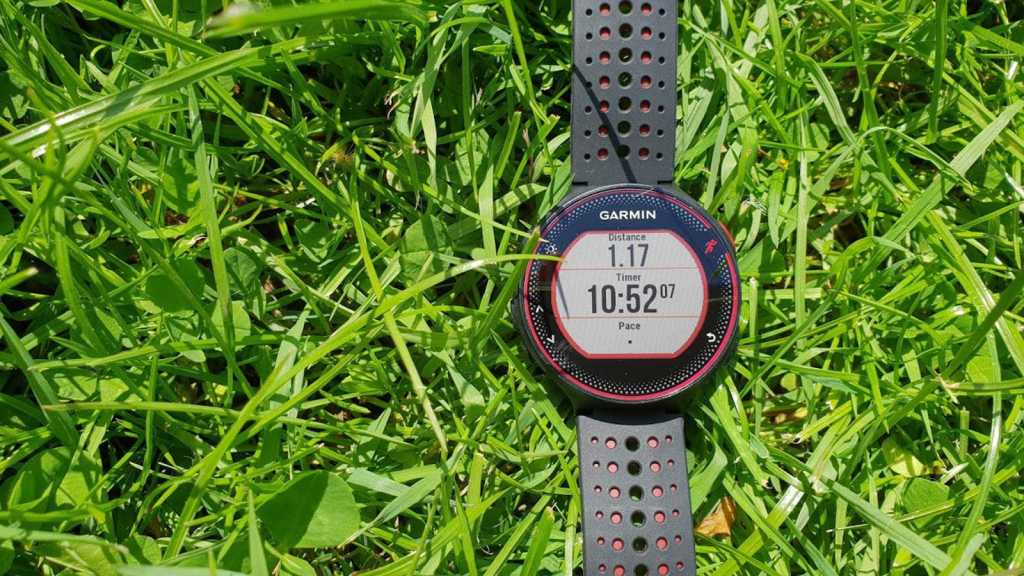 Despite the flaws of the Garmin Connect app, the Forerunner 235 is one of the better GPS running watches on the market. Its relatively subtle black model can pass for daywear, and the accuracy and reliability of GPS tracing are second to none. But if you want an app that is easy to get to grips with and immediately encourages you to train up to a certain distance, then you may prefer the Polar M430. The Forerunner 235 is designed with all running abilities in mind, but ends up feeling more for elite enthusiasts than it should.

If you’re serious about running, a decent GPS tracking watch is almost as important as your running shoes. Garmin makes a lot of running watches, and the Forerunner 235 is one of the best available.

It isn’t the cheapest GPS watch on the market, but with a colour screen, good connectivity and excellent battery life, it should be taken into consideration whatever your running ability.

In the UK, it’s also sold at  Blacks and  Amazon.

The design of the Forerunner 235 is a slightly acquired taste but is subtle enough that it looks like a normal digital watch. Considering the tech packed inside it’s a slim watch that doesn’t sit too far off the wrist.

Five prominent buttons are a slight giveaway, with a running person printed on the red enter button, and there are four more black function keys around the plastic casing. The silicone strap is full of holes for both the strap adjustment and airflow – the less material, the lighter the watch is too.

Though compared to some similarly priced rival products, it does feel a little cheaply made, but then again Garmin has wisely opted for function over form.

The back of the watch doesn’t look comfortable at first, but it is once you’ve got it on. There’s a heart rate sensor that sticks out necessarily to record your pulse, and the proprietary charging pins are just to the side of it where the charger clips on.

A dotted pattern curves around the face of the watch but is subtle on our red and black review unit. It’s also available in a quieter black and grey or a much louder frost blue.

The watch’s display blends into the black casing, but is a little smaller than it first appears. The display shows mainly white or red colours on a black background, but during workouts flips this to a white background with black text and data to make it easier to read while running.

All input is done via the buttons on the casing, as this is not a touchscreen device. The Forerunner 235 is obviously a piece of tech, but it’s not as outlandish in look and feel as some competing watches on the market like the Polar M430.

Looks aside, the Garmin Forerunner 235 excels in its primary function – tracking your runs and read outs. From the home screen that displays the time you’re only three clicks of the red enter button from beginning a workout.

It’s designed to track your run, but in comparison to some other GPS running watches isn’t as good at training you up to a certain distance, even if it does excel at accurately recording your workouts. Garmin offers downloadable training plans, but they are hard to find in the app, and aren’t readily advertised to you as the user.

Everything works seamlessly as the watch triangulates your position via GPS and goes about recording your progress. Using the arrows buttons, you can scroll through distance, timer, pace, your lap distance, time and pace if you manually record laps as you go, heart rate and heart rate intensity zone and the time.

The read outs are clear and simple and let you concentrate on the run. Once finished, you can save the run to the watch – but you have to remember to manually sync the watch you’re the app on your phone afterwards for a detailed readout of your activity.

The watch will estimate how long your recovery time should be, but then you should head to the app to delve into the stats. It’s also got a power save mode that automaticvally turns on after a workout, where it turns off the GPS and Bluetooth signals needed when on runs.

This means the standby time for the Forerunner 235 is outstanding when not in use, with nearly two weeks battery life. Though obviously if you’re hammering the GPS (as well you should!) then the battery is meant to last up to 11 hours with constant GPS use.

There is GPS and GLOSNASS mapping to ensure coverage no matter where you are in the world, and the display is sunlight-visible to great effect. The vibration motor is also excellently loud and strong – this means you won’t miss a notification or read out, but does mean it’s quite loud if you’re in a quiet room.

Those notifications can be work out related, or you can set up smart notifications from your phone from any app you like. We preferred to keep them off, as the 235 is a running watch and isn’t designed to handle smartwatch duties. You might also want to keep it this way, but if you do want a running watch that is a decent smartwatch, check out the Apple Watch Series 3.

Forerunner 235 will also buzz you if you haven’t moved in a while, and is a surprisingly effective motivator – particularly good if you have a desk job. It’ll monitor your calories burned, distance, steps and minutes of intense throughout the day and will even track your sleep if you wear it at night.

As well as running, the watch can also record cycling, swimming (yes, it’s waterproof), walking and yoga. It’s able to do so largely thanks to the accuracy of the heart rate monitor in conjunction with GPS. Its functions are relatively simple, but that is what you should look for in a GPS running watch – and the Forerunner 235 gets the basics totally right.

If the watch itself is pleasingly simple, then the Garmin Connect app is slightly more complicated, and mars the experience of using the watch. While it stores all your run data after you’ve manually synced, its layout is a tad confusing and there are too many options buried in menus.

It’s practically identical and works the same whether you download for iOS or Android.

Once we got to grips with it, it became useful, but the learning curve was surprisingly steep. The most useful part of the app is simply viewing detailed readouts from your workouts. Tap the calendar tab, and you can see an overview of activity in a month view. The problem is, the colour code doesn’t have a key and you don’t know what you’re looking at.

Tapping into a day reveals more, and the watch is clever at naming activity (an afternoon jog round our local East London park was automatically named ‘Hackney running’) and showing you your results. It shows your route on a map, places you recorded a lap, the weather, and everything else you’d expect.

The readouts are very granular, and you can add a photo, note or even share the activity if you have added friends on the Garmin Connect platform.

All these features are excellent, but the unapproachability of the app means it’s more of an effort to wring the benefits out of the watch than we’d hoped.