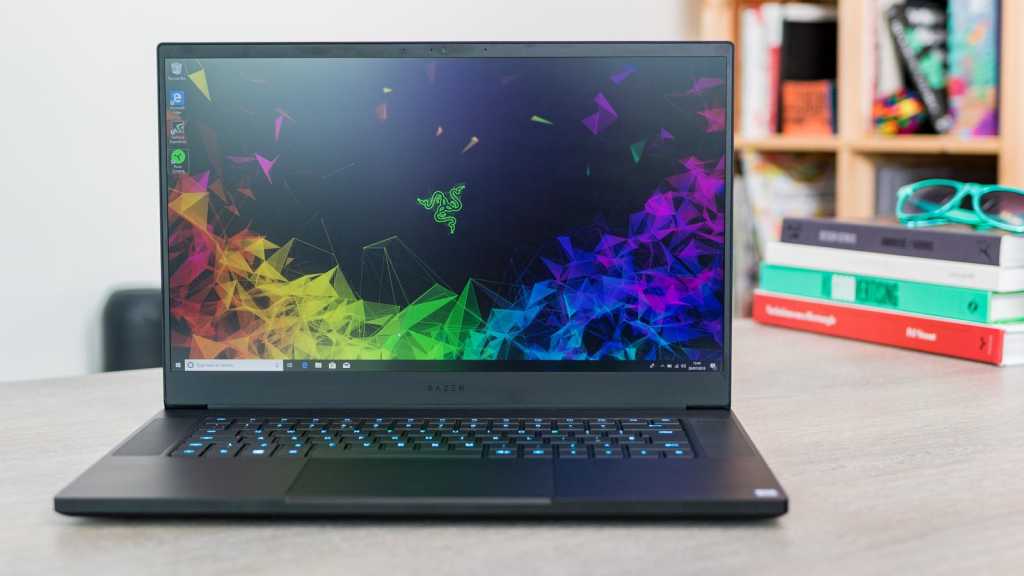 The Razer Blade 15 is pretty expensive, especially if you want a 144Hz model, but not more than rival gaming laptops and you’re getting a serious combination of design and specs here. This gaming laptop has been refined, upgraded and improved to provide a 15.6in experience in a size barely bigger than before (in fact, it’s thinner). Add in 8th-gen Core i7, Nvidia Max-Q GTX graphics and lots of other goodies and we’re looking at one of the best portable gaming laptops money can buy. It can get a bit hot and noisy at times but there’s very little to dislike about this stunning device.

Razer is back with a new Blade and a bold claim, describing the 2018 model as the ‘world’s smallest 15.6in gaming laptop’. It comes with an improved design, 8th-gen Intel and Nvidia Max-Q and a 114Hz refresh rate. We’ve taken a close look in our Razer Blade 15 review.

In brief, what Razer has done here is taken the classic Blade design and squeezed in a larger screen without making the laptop any bigger – well not by much anyway. There’s more to it though, with a number of upgrades and refinements throughout.

The price of a high-end premium gaming laptop isn’t for the faint-hearted as the Razer Blade 15 starts at £1,699/$1,899 – that’s almost double the Blade Stealth from not too long ago, but cheaper than the premium Razer Blade Pro 17. Although the laptop starts at under £2k, you can spend a chunk more if you opt for the most expensive model since it will set you back £2,549.

This puts it in direct competition with the new Gigabyte Aero 15X and Asus ROG Zephyrus GX501 Although there are cheaper 15in gaming laptops, like the Alienware 15 R3 and Acer Aspire VX 15, they are much less sleek and portable.

Razer sent us the model bang in the middle of the line-up which offers a good balance of price and specs. You can buy direct from Razer or with retailers including Amazon, Scan and PC World Currys.

Here’s a breakdown of the Razer Blade 15 prices:

If you’ve been hovering on the buy button but not pulled the trigger due to price, then Razer has more affordable options for the Razer Blade 15 laptop, at $300 cheaper than previously.

What Razer is calling the ‘Base Model’ still comes with the same 8th-gen Core i7 and 16GB of RAM inside the same laptop. However, you get a smaller SSD alongside a large traditional hard drive instead of the previous minimum 256GB SSD.

Either way you get the Full HD 60Hz screen and a GTX 1060 graphics cards.

As well as the new base model, Razer has also introduced a dazzling Mercury White colour which is a limited edition. “Limited quantities will be available for purchase in Q4 2018 as an exclusive direct from Razer in the US and Canada, and at selected retailers in China,” said the firm.

In contrast to the regular style is has a matte white finish with black USB ports and a non-illuminated, ‘tone-on-tone’ Razer logo on the lid. There are two skus to choose from here, both include a Core i7 and, 16GB of RAM, 512GB of storage and the Full HD 144Hz screen.

As you can see, there’s no big departure here from Razer’s design that, over the years, has become iconic in the gaming market. The Blade 15 offers that black and green sleek style that many adore.

We’ve always liked Razer’s style and it’s great to see the firm making all the enhancements it can.

The headline design element here is that the Blade 15 manages to offer a full-size 15.6in display inside a chassis that appears to be no bigger than well-known 14in Razer Blade.

In fact, in some ways, the new model is smaller!

So, the Blade 15 is 13.98in in width, which is a small increase from the 13.6in you might be used to. Fitting that larger screen in is largely down to it being ‘edge-to-edge’ with tiny 4.9mm bezels.

And when it comes to thickness, the Blade 15 is actually thinner than its predecessor. Depending on what graphics card you get, it’s 17.3- or 16.8mm – down from 17.99mm – so it’s the thinnest GTX laptop around.

Update: The Asus ROG Zephyrus S is now the thinnest in the world.

This doesn’t compromise on connectivity though, as you still get full-size USB and HDMI. We’ll go through the rest later.

Overall, the design is more squared off and mirrors the lines of the Razer Phone. This includes front-facing speakers on either side of the keyboard, just like on the smartphone. The eagle-eyed reader may have spotted the power button is now on the right rather than central; it looks like it might have a fingerprint scanner built-in but it sadly does not.

The idea is portability and the laptop is very much that at 2.07-2.15kg depending on which model you buy. Even at its heaviest, the Blade 15 is a more than luggable.

The last thing to mention is that the Blade 15 has a new cooling system that includes dual fans and a large vapour chamber. It looks nice on the underside but we’ll talk about how hot the laptop gets in the performance section below.

You get the same Chroma-enabled Keyboard so you can mess around with lighting to your heart’s content using the Synapse software. There’s more to say here though.

With the speakers either side, there’s no numpad (although that means a more central position) and there are no macro buttons either which many gamers will miss. The remaining keys provide a nice experience though with a crisp action and a satisfying soft click each time to press a key.

There’s also a game mode to avoid pressing common Windows shortcuts and interrupting your game. We didn’t have any issues but some will find it more akin to an Ultrabook than a gaming keyboard, though.

The glass trackpad is new and it’s huge. You will want to connect a mouse for any serious gaming but for general use the trackpad is brilliant.

As mentioned already, the new Razer Blade 15 for 2018 offers a 15.6in and we’re loving the new small bezels that run around the edge, making the laptop look great and keep the size of the chassis down.

The screen comes in a range of options though so you’ll need to choose wisely.

At the bottom end the Blade 15 has a Full HD display with a 60Hz refresh rate. This model only has the GTX 1060 and 256GB of storage so bear this in mind. At the top end is a 4K screen, also at 60Hz and is the only model with a touchscreen. This comes with a 1070 and 512GB and will be overkill for many.

We tested the Full HD model with a 144Hz refresh rate which comes with a choice of graphics card and hard drive.

This will be the best option for most if your budget stretches. It will be worth it for the extra smoothness that the increased refresh rate provides. We like the matte finish on the Full HD options but the display isn’t the brightest around at 275cm/m2 so we almost always had it at full brightness.

The display is colourful offering 99 percent of sRBG in our test but 76 percent of Adobe RGB, the gamut favoured by designers, isn’t so great. This is a gaming laptop though so this is only an issue if you’re looking for one that can be used for both work and play – in which case the Gigabyte Aero 15X will suit you better.

The 4K model could be a lot better for this but we can’t say.

Regardless of which model you choose, you’re going to an 8th-generation Intel processor. As you’d expect from a high-end gaming laptop, it’s a Core i7-8750H – a 6-core, 12-thread, 9MB cache chip with a 2.2GHz base speed and up to 4.1GHz with Max Turbo. That’s the same as the Asus ROG Zephyrus GX501.

Every Blade 15 comes with 16GB of DDR4 2667MHz RAM, but you can upgrade it to 32GB. Windows 10 comes pre-installed, of course. Storage goes up to 512GB in the form of an M.2 SSD but it depends what combination of things you want.

In terms of graphics, there’s an Nvidia GTX 1060 or 1070 in the Max Q form, essentially versions of the desktop cards made for thin laptops. If that isn’t enough graphics power, then Razer has also launched a new Core X eGPU to house a desktop card. It’s now just £269.

Here’s a reminder of the SKUs on offer:

And the new Base Model options:

We tested the model in the middle with a GTX 1070 with 265GB of storage and the results are very decent indeed.

In our gaming benchmarks the Blade 15 managed impressive results. Tested at Full HD resolution, the laptop managed 101.5fps on medium settings in Total Warhammer and 64.3fps when set to ultra. In Tom Clancy’s Ghost Recon it got 79.8fps on medium and 44.6fps.

These aren’t far off the Asus ROG with its 1080, so the Blade 15 can offer Full HD gaming at ultra settings and more than playable framerates.

The chassis does get quite hot though. The fans get quite loud and the sections either side of the trackpad where you’ll rest your palms gets warm. The hottest section is between the keyboard and screen which we’d often describe as too hot to touch.

Razer says this is normal with a metal casing and heat is drawn away from where you make contact with the laptop. It’s worth noting that since the air intake is on the bottom, you shouldn’t use the Blade 15 on a cushion, bed or similar.

Connectivity is decent despite the laptop being thinner than before. You get three USB-A 3.1 ports (in green, of course), HDMI 2.0, USB-C Thunderbolt 3, a 3.5mm combo jack and, for the first time, a mini DisplayPort 1.4. This means you can support up to three external displays.

There’s also a 720p webcam, which is above the screen not below it like many new laptops. You’ll also notice a proprietary power connector. This comes with an angled cable to feed the cable to behind the laptop.

As noted earlier, there are speakers either side of the keyboard. So while many laptops have speakers on the side or even underneath, these ones actually point vaguely towards your ears.

They’re no replacement for a headset but the quality, for a pretty thin laptop, is good and there’s a decent amount of power should you need to drown out fan noise. If you’re gaming there’s even a bit of stereo separation so you can tell which side an enemy is coming from.

It’s no secret that gaming laptops aren’t made for battery life. The Razer Blade 15 has a 80Wh battery built-in which is a chunk bigger than the Asus ROG Zephyrus we reviewed and it shows.

Razer’s device lasted almost twice as long with a result of two hours and 45 minutes – that’s playing a video on loop at 120cd/m2 (40 percent brightness in this case). It’s still not great but it does mean you can play for a little while without needing a power socket.

However, there’s a simple way to get a lot more battery life and that’s switching the screen to 60Hz – you can do this in the Synapse software. With the display at a lower refresh rate you can get an impressive eight hours of battery life in the same test.

Just remember to switch it over when you’re doing things like watching a film and not gaming.