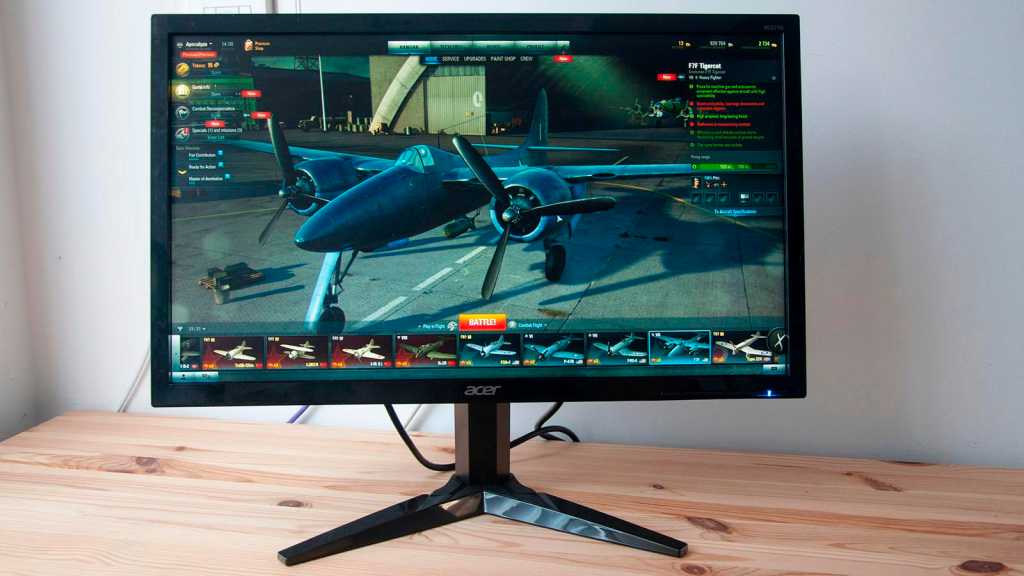 We assumed at this price that the Acer KG221Q wouldn’t be much good, but when all things are considered it’s a decent display. The colour representation was much better than we might have hoped, and the screen is sharp enough to use for desktop work when the gaming is over. The only aspect that undermines it is the number of 24-inch screens that cost just a little more, including some from Acer.

There was a point in time when adding the word ‘Gaming’ to any device elevated both the cost and user anticipation.

We’ve come a long way since then, though some gaming products are still expensive, specifically monitors. But you can still get a gaming screen that is highly affordable, if you are prepared to lower your expectations, both in screen size and the refresh rates available.

Let’s look at what you get for the modest investment needed to own the Acer KG221Q.

The amount of plastic used in this design won’t surprise the typical technology fan, as it comes with the budget territory. That said, there is relatively little wrong with the build quality and construction of the Acer KG221Q.

It also embraces the modern styling that dictates the narrow frame all around,  though the marketing department would be hard pressed to describe it as ‘frameless’. Instead, they came up with ‘ZeroFrame’, when the frame is at least a 1cm all around, if not slightly more.

The support foot comes in two pieces that easily come together without tools, and it can be entirely removed if you wish to use the VESA 100 mountings on the rear.

Tilting is the full feature set of the support leg, but it does provide a stable platform for the KG221Q. Maximum tilt is 15 degrees back and 5 degrees forward from the vertical.

Many smaller displays offer a thinner case by using a repurposed laptop PSU. Thankfully Acer didn’t go that path, and it has an integrated power supply that should keep the cabling neater at least.

Less of a surprise is the input selection; with just VGA and HDMI available. We understand why monitor makers can’t finally give up on VGA, but we so wish they would.

Alongside those are two audio jacks; one to input audio if the user is still a fan of VGA, and the other to direct audio out to headphones. We’d recommend the headphone approach as the two internal speakers with only 2 watts of output they aren’t up to much.

In defence of the KG221Q and other screens, few people buy a monitor for their sound output. What they’re more interested in is the display, and Acer used a TN technology LED panel here that has a high refresh rate and also supports up to 75MHz in 1080p resolution.

We need to mention that the computer must be connected by HDMI to get 75Hz refresh and 1080p resolution because VGA can’t handle that combination.

This design is also FreeSync certified, allowing for variable sync speeds if you have a suitable AMD video card. The scope of this mode is only between 40Hz and 75Hz, so you won’t need a very powerful GPU to make use of it.

With more powerful video cards it is probably better to just set 75Hz and be done with it, as you would with any Nvidia GPU. Acer chose to use an OSD (onscreen display) that uses a line of buttons on the right-hand frame edge, and not the mini-joystick that has started to replace it on very recent screens.

These buttons are a pet hate of ours. As these menus tend to use button combinations that change depending based on where in the menu structure you are. Acer did at least line the menu selections up with the physical button positions, which makes it slightly less annoying to use.

The section that most gamers will probably need is the top level menu where you can set one of the three different gaming modes; Action, Racing and Sports. Or, the ECO, Graphics, movie mode or custom ‘user’ settings.

Even in the user-defined mode, controls are limited. Colours adjustments on the OSD talk about ‘warm’ and ‘cold’ and not Kelvin values. There is also a restricted blue light mode, and ‘Black Boost’ should you care more about your eyes more than the colours displayed.

Input selection is also on this menu system. But we did laugh that it takes at least four button presses to switch between two options, and there is an ‘Auto Source’ option that makes it fully automatic.

That’s enough detail, so how does it perform?

Because the panel Acer found for the KG221Q is a decent one that hides its limitations well and performs acceptably within the narrow constraints of its remit.

The problems it does have are mostly the same that almost all TN panels suffer. Most notably, poor viewing angles. We’ve seen worse, and if you are a gamer who doesn’t play with an audience, you’ll probably never notice it.

Where it exceeds is the colour representation, something that traditionally isn’t a strong point of TN panels.

Running our Datacolor Spyder Pro 5 calibration and analysis revealed that the KG221Q handles 98% of the sRGB Gamut, although it only manages 76% of AdobeRGB.

That’s plenty colours for most gaming uses, and the quoted brightness of 250 cd/m2 turned out to be an undersell. It betters that objective by at least 20 cd/m2 at full brightness. Acer doesn’t quote a static contrast, but the tested ratio of 740:1 wasn’t anything to be ashamed.

A minor weakness is the tone response which seems to wander from being close to 2.2 at the start of the curve to being nearer to 1.8 Gamma at about 70% of output brightness. As this screen wasn’t meant for serious colour work, that degree of variance isn’t a major problem.

Its objectives might be modest ones, but to better most of the promises that it makes is surely a much better scenario than to disappoint paying customers.

Overall, the Acer KG221Q has a decent panel that many budget gamers would appreciate.