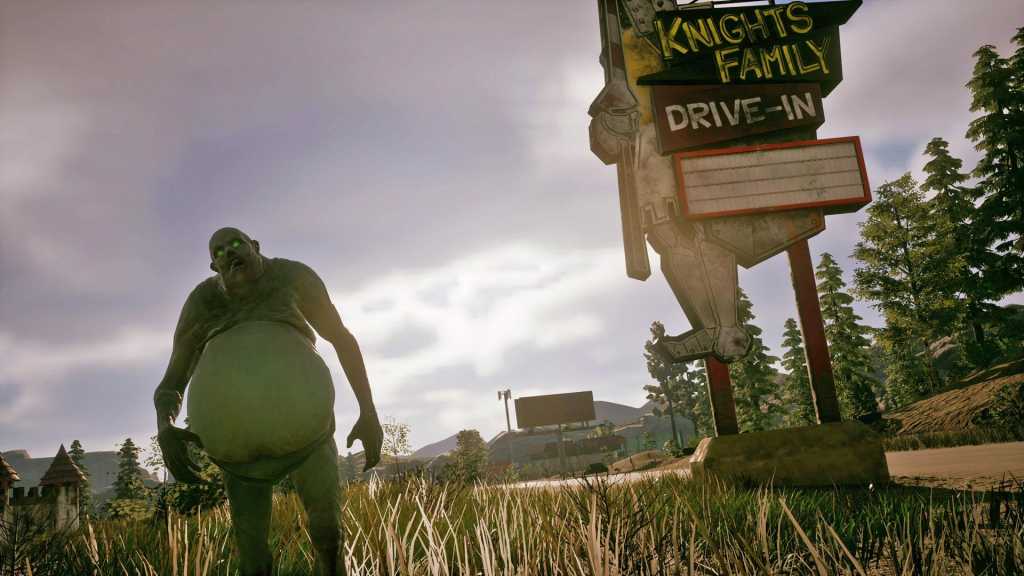 State of Decay 2 isn’t a bad game by any means – it offers a deep upgrade system for both your survivors and your base, a variety of zombies, multiple environments to explore and scavenge and more survivors than you can save in a single run, but the bugs do ruin the overall experience. Four-player co-op is an attractive feature that should provide more natural open-world shenanigans with your friends, but it’s something we’re yet to try ourselves. State of Decay 2 is a decent game, it just needs fixing.

Following the release of State of Decay back in 2013, State of Decay 2 looks to improve on the series’ unique take on the zombie genre. Like the first title in the series, you’re tasked with building a community of survivors in the midst of a zombie apocalypse, helping others that you come across and defeating zombie plague hearts spreading the mysterious disease. It’s not as easy as that though, as you’ll soon find out.

We’ve played State of Decay 2 on the Xbox One X. Is it a worthy successor to the first State of Decay, or has Undead Labs created a monster? Here’s our review.

State of Decay 2 pricing and availability

State of Decay 2 is due to be released on Xbox One and PC on 22 May 2018, and is a part of Microsoft’s Play Anywhere scheme. This means that if you purchase the game on the Microsoft Store, you’ll be able to play the game on your PC and Xbox One with synced progress between the two. It’ll also be available as part of the Xbox Game Pass at launch, so subscribers to the program need not pre-order.

If you want to get your hands on the game four days early, on 18 May, you can pay a little extra and pick up the Ultimate Edition for £39.99.

In the meantime, why not check out our list of the best Xbox One games that you can download right now?

In a time where it seems like every other game that is released is a zombie game, State of Decay 2 provides an interesting spin on the genre with elements like permadeath and community management. You could even draw comparisons between the game and popular TV shows like The Walking Dead, scavenging for supplies, taking on hordes of zombies, helping other survivors and occasionally coming across something worse than zombies; pissed-off humans.

Let’s start off by talking about the world; the game, in general, is very detailed with great map design. No two areas look the same, offering a variety of different locations to explore, from forests to towns to hospitals and army bases. Most buildings (and even some abandoned vehicles) provide valuable supplies for the survival of your community, and you can scout potential locations from designated towers dotted across the map.

There’s a day-and-night cycle present in State of Decay 2, and as you might imagine, night time can be terrifying. The only light available comes from your torch or the headlights of your vehicle, making exploring abandoned buildings and scavenging a difficult task. Was that a pair of glowing red eyes watching us from the darkness? Or was it the reflection of our torch? It’s a situation you’ll come across time and time again, and no matter how well-armed you are or how well-fortified your position is, zombie hordes can be deadly – even more so when you can’t see them coming.

The fear factor is ramped up by great sound design. Environmental noises combined with the occasional roar of a feral or grunt of a zombie, especially at night, keeps you on edge. But it’s not just one way, oh no. The zombies hear the noise that you create and will respond appropriately, whether it’s footsteps from running or firing your weapon. The zombies are forgiving at the beginning of the game, letting you get away with making noise when rummaging through shelves and cupboards, but they become more sensitive to sound as the game goes on, making stealthy approaches all the more desirable. 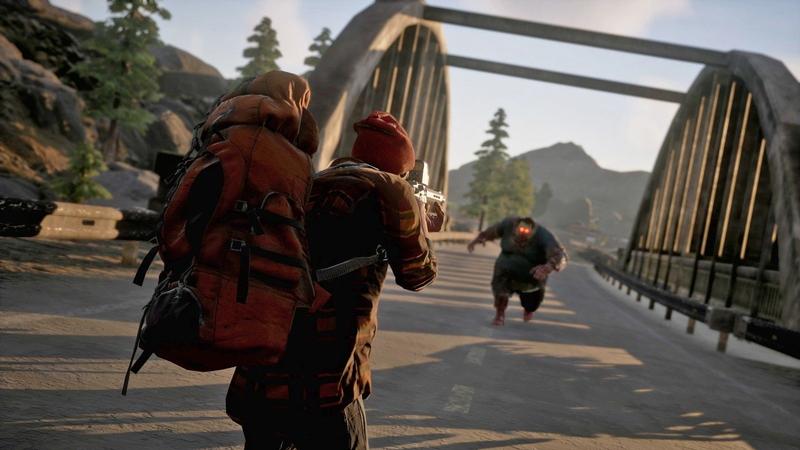 When you do come face-to-face with a horde of zombies (trust us, it happens a lot), you have two choices; run or fight. Don’t get too overconfident though, as State of Decay 2 is much more realistic than other games in terms of combat, meaning you can’t take on 10 zombies by yourself and expect to come out victorious. The melee combat is simple, with a single button to attack and one to dodge, but that doesn’t make it any less satisfying. Watching your survivor chop off arms and legs never gets old, and as they become more skilled, they will unlock advanced combat techniques that can provide the upper hand in tense situations.

Of course, the biggest threat in State of Decay 2 is permadeath. That’s right, if you make a wrong call when out in the world and your survivor gets eaten by zombies, they’re gone for good. The game constantly autosaves too, so reloading an earlier save is rarely an option. It’s a great mechanic, as you become more attached to your survivors as time passes and you upgrade their various skills, making their deaths all the more devastating.

It’s not just devastating in the sense that you’ve lost a member of your team, either. Each survivor possesses a unique skillset that can be developed throughout the game, providing access to advanced base upgrades. These skills can range from computer skills to chemistry, and if you lose your tech-savvy survivor, you can wave goodbye to future upgrades. It’s amazing just how quickly a community can fall apart from the death of a single valuable survivor.

Your community and base need to be managed, not only in terms of survivor health, but supplies like food, medicine, ammo and building materials to improve the facilities available at your outpost. It’s a constant need, and the more survivors that you recruit, the bigger the output – especially when it comes to food. Each day, your supplies will whittle down until there’s nothing left, and that’s when chaos can break loose.

As well as scavenging for supplies for the community, you can build facilities at your base that provide benefits like running water and electricity, workshops to repair weaponry, infirmaries to cure your injured survivors and firing ranges to improve weapon accuracy. You’ll gain access to more advanced, helpful facilities as you progress through the game, providing support for your personal play style. You can invest heavily in weapon-based facilities if you’re an aggressive player, or invest in more beds if you just want the largest community possible. It’s up to you, as long as you’ve got the resources available to pull it off. 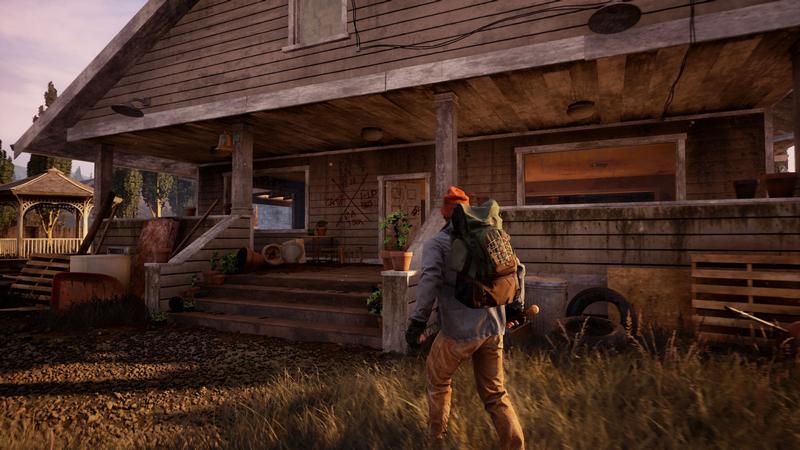 As well as upgrading your base and gathering supplies for your community, your survivors will provide tailored missions that can provide unique bonuses like fully modded weapons, customised vehicles and skilled survivors. These can help break up the tasks of scavenging and taking out plague hearts while also providing a boost to your community. There is one annoyance though; while you’re usually able to switch to a survivor that’s following you (to carry a rucksack of supplies and other valuables), doing so during a mission will abandon it, meaning you’ll have to make a second trip to pick up any supplies that you can’t carry.

But beyond the survivor missions and destroying plague hearts to find a cure, there isn’t much of a story to State of Decay 2. And, without an engaging story to keep you motivated, the game starts to become a little repetitive, even as you progress and gain access to more advanced equipment and facilities. Scavenge this, scavenge that, kill this horde, clear the infected from that house, run over that feral and head home. Switch survivors, and go and do it all over again.

The good news is that you can invite three of your friends to come along on your scavenging hunts with you, making gameplay more fun and engaging. You can communicate tactics to stealthily clear out a house of zombies, or scream for help when running from a feral. Trapped in a house surrounded by zombies? One of your friends can hop in a police car, activate the sirens and lead them all away. There are many more options available to you when playing four-player co-op with friends, but sadly, due to the pre-release nature of the review, it’s something we’re yet to experience for ourselves.

The biggest problem with State of Decay 2 in its present form is bugs. The game, even after a 6.4GB pre-launch patch, is still pretty buggy. We’ve experienced doors that look open that are actually closed, flickering UI glitches, buggy survivor AI (one of our survivors ran into a house full of zombies and got himself killed for no reason), teleporting to different places when speaking to survivors, framerate drops and more. It breaks immersion and gets to the point where you become frustrated with the game, and it’s a shame.

Of course, bugs will be squashed in time, and we’re still hoping for a large day-one patch, but if this is an accurate portrayal of what gamers will be playing on day one, they’ll be frustrated. Gamers often complain when games get delayed with developers often citing bug fixes and improvements as the reason, but this is what you get when that doesn’t happen. The number of bugs suggests that State of Decay 2 isn’t quite ready for prime-time just yet, and feels a bit more like an Early Access title than a launch title.