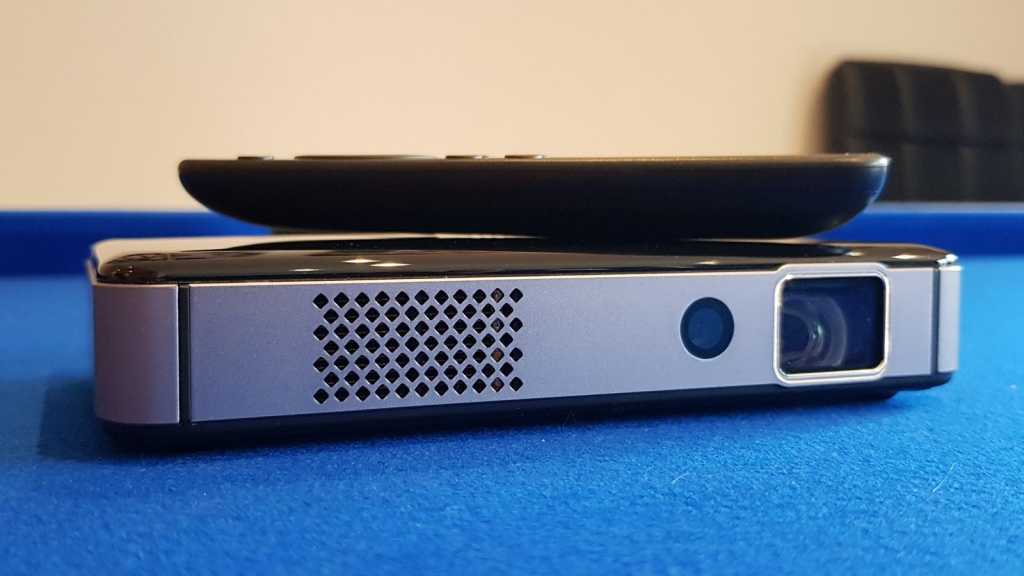 The Apeman M6 is an affordable projector that is an ideal size for carrying around, but you may also want to carry a PD power bank to keep it going beyond its standard 1.5-hour runtime. With HDMI, USB, HappyCast and a built-in Android OS it makes streaming any content simple, though you have little control over the displayed content itself.

Apeman’s M6 is an ideal device if you like watching your movies in super-size, especially when you’re not always viewing them at home. A portable projector with a tiny 153x95mm footprint, this 522g box is easy to sling into a bag or oversized pocket and you’ll barely notice it’s there.

With HDMI and USB inputs, plus HappyCast support for screen mirroring, it’s easy to connect your phone, tablet, laptop or even a USB drive and stream content to the projector.

You can also make use of the built-in Android 4.4 operating system. There’s no support for Google Play, but a built-in app store supports apps such as Netflix and Hulu, and you can sideload APKs once you have installed a browser.

Projectors – even portable ones – are not typically cheap, so this isn’t a bad price. Several of the examples in our best portable projectors round-up are closer to £600.

Apeman’s M6 is unbelievably small, and one of the tiniest projectors we’ve come across. That makes it easy to carry around and take wherever you go, but note that no carry case is supplied and you’ll probably want to protect its glossy top surface from bumps and scrapes in your bag.

It’s lightweight at 522g, which is half the weight of an ultraportable laptop. It’s no bigger than most smartphones in length, though perhaps twice the width and three or four times the thickness.

The Apeman has a fairly attractive design with a gloss black top surface with rounded corners that slope down toward the metal frame. A large vent at the front and another below helps to dissipate heat, and though it kicks out quite lot it remains cool in use.

Around the back of the device you’ll find HDMI, USB and USB-C inputs, the latter for charging, plus a 3.5mm headphone jack. There’s no microSD storage expansion slot, though you can use the full-size USB port to plug in a hard drive.

To either side here are speaker grilles, with two 2W drivers inside. The positioning means they should fire out sound toward you, assuming you’ll be sitting behind the projector.

A Bluetooth remote control is bundled, which runs on two AAA batteries (also supplied). We found it very intuitive to use, which is handy given that the only controls on the device itself are autofocus and volume, though you can also connect a mouse over USB or Bluetooth.

There is a mouse function on the controller, and it works better than many we’ve tried. Rather than using the circular navigation control to position the cursor where you need you can just point and click, which feels natural.

Using this remote you can also adjust the volume, toggle on and off Eco mode, access back and home functions, trigger the autofocus and select the source.

The M6 is designed to be used right out the box, which will suit novice users down to the ground. There’s very little here in the way of customisable settings, but that is both good and bad.

Though you can manually adjust the focus if you wish, the projector also has an Autofocus feature, accessible by pressing the button on top of the device or the top right key on the remote control. It does an excellent job of adjusting the focus, and also automatically corrects keystone up to 45 degrees. There is no other option in the settings for correcting keystone.

In some ways this is so much better than having fiddly manual controls, but it assumes you always want to stream content straight ahead.

You might be lucky enough to have a table or other surface in exactly the right position and distance from a wall to project an image the size you want at the angle you want, but you could just as easily find this a challenge. You could always attach a tripod to the bottom of the M6 to aid positioning, and it will support a standard connection.

The specs are pretty good for the money, with the Apeman able to produce 1000 Ansi lumens. That means its output is visible without requiring a blacked-out room, though obviously the darker it is the better the results will be.

Another omission in the Settings menu is the ability to change the screen brightness on a slider. You can put the projector in Eco mode, which dims the screen, or Vivid mode which brightens the screen and enhances the contrast (1000:1 max), but that’s all the control you have here.

Reducing screen brightness can help the battery last longer, and that’s going to be a bit of an issue with the 5000mAh battery able to last only an hour and a half away from the mains. That might be plenty for a presentation, but most feature films are longer. Fortunately it charges over USB-C, so you could hook it up to a PD power bank for longer viewing time.

There’s just 1GB of RAM and internal storage is meagre at 5GB. You will quickly run out of space if you download a lot of apps (either from the included app store or by sideloading APKs) or store media on the projector itself, which makes us think the M6 is primarily designed for streaming content from a connected device.

In navigation it feels pretty nippy running on a 64-bit quad-core processor, but downloading apps takes a long time even over a good connection. This isn’t so much of an issue once those apps are downloaded of course, since the M6 has enough grunt to play back content nicely.

By default it has a 720p (HD) resolution which it projects at a 16:9 aspect ratio, ideal for films. 1080p (Full-HD) is possible through upscaling. The quality is generally pretty good, but naturally the picture will degrade the larger it is. The Apeman can project an image from 40- to 300in.

It’s nice to see some built-in stereo speakers, meaning that you don’t have to also carry around your own. They’re useful but not amazing, yet this pair of 2W drivers are capable of drowning out the minimal amount of noise produced by the internal fan. You can connect something beefier using the 3.5mm audio jack or connecting a speaker over Bluetooth if you prefer.