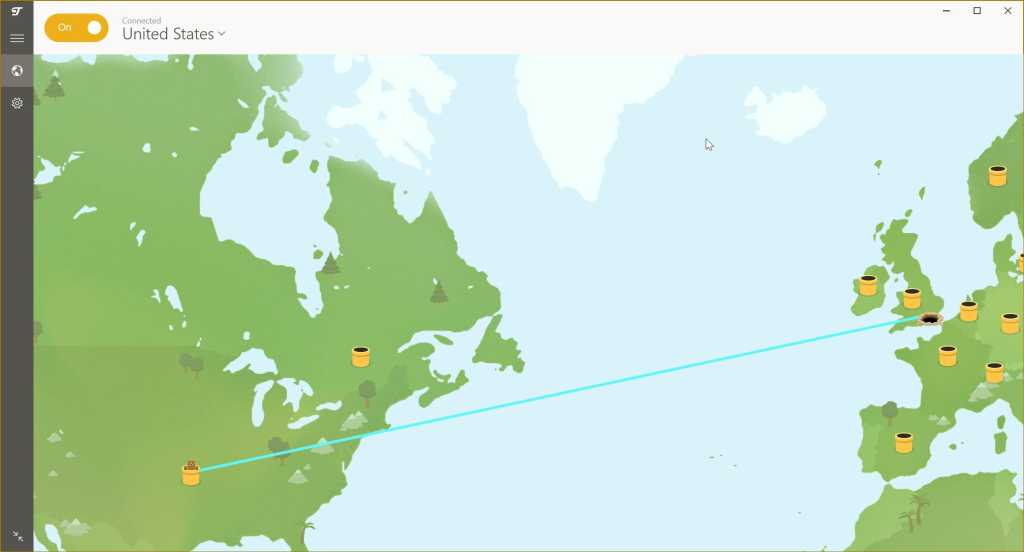 A fun approach that’s very easy to use and backed by a solid, reliable service. It’s ideal if you don’t want to be bamboozled by choices and settings, and means TunnelBear is great for families and for security on public Wi-Fi.

This is a VPN like no other we’ve reviewed. We like bears, so a simple, bear-themed VPN really piqued our attention. The theme of our ursine friends runs through the software, the website, and the attentive support effort, but thanks to a fast, easy-to-use product, the joke never wears thin. Digital privacy doesn’t have to be technical and dull, and TunnelBear may even encourage children to take their online security a little more seriously.

Many people will know of TunnelBear because of its free offering. Few VPN services have a truly free tier, but here as you’ll find elsewhere, you don’t get very much without paying for the service.

The main limitation is data: you can only use 500MB of data per month on a free account. That may be fine if you’re only intending to use a VPN on open public Wi-Fi networks, but it isn’t enough for everyday browsing and certainly not for streaming video.

Most of TunnelBear’s rivals (many of which you’ll find in our round-up of the  best VPN services) focus on providing plenty of options and complete control over where in the world you choose to anonymously pop up. In comparison, TunnelBear is almost simplistic in its approach.

After installation (which on Windows 10 includes steps such as “Unboxing the Bear”, “Brushing fur”, “Cleaning paws” and “Greasing the Tunnels”), the main interface is friendly, featuring as it does a bright, colourful world map showing the countries to which you can connect.

There are 22 countries (including the UK) in total, but no choice of server – one is picked automatically. In total TunnelBear has around 350 servers.

This may not sound like much compared to other services, but the destinations do stretch from Brazil to New Zealand and include the UK, US, Canada (where TunnelBear is based) and a handful of European countries.

You can connect up to five devices to the service simultaneously, which should be more than enough connections for most people.

Apps are available for Windows, macOS, iOS and Android, plus browser extensions for Chrome, Firefox and Opera which could be useful if you don’t want all your internet traffic running over the VPN connection and are happy to just protect all activities within the browser.

We’d like to see a dedicated app for Amazon’s Fire TV, but this is the only notable hole in the offering. It’s unlikely many will be fazed by the absence of a router installation for TunnelBear.

As we’ve said, the apps are very simple with no confusing settings or options. Under the Settings menu you’ll find a couple of useful features: notifications for when your device is connected to an unsecure network and also a Trusted Networks section where you can force TunnelBear to connect whenever it’s on a Wi-Fi network that isn’t in the Your Trusted Networks list.

Under Security lurk two further bears. Kill switch functionality is handled by VigilantBear, which blocks all traffic while the VPN connects, or while it re-connects if the connection drops for some reason.

GhostBear makes your VPN traffic look less like VPN traffic by scrambling it to make it less detectable by your ISP, businesses that might want to detect your VPN use, and hostile governments. These two tools are off by default, but it’s well worth engaging them if you get problems when streaming foreign content, though GhostBear can cause its own problems and will slow down the connection even more.

Most apps use the OpenVPN protocol, defaulting to the maximum 256-bit encryption. The Android version is fully-featured, and has the added touch of fluffy clouds floating over the map. It contains VigilantBear and GhostBear, and also SplitBear. This third module enables you to decide which of your apps should not use the VPN when engaged, and is not available in the Windows or iOS apps.

GhostBear isn’t in the iOS app either, due to Apple’s restrictions, and this app uses IKEv2, not OpenVPN. On the mobile versions, you also get a “roar!” when you connect, which is a nice touch.

It isn’t ideal that TunnelBear’s head office is located in Canada, which is in the top tier of “5-eyes” countries that share signals intelligence. However, this is a VPN firmly dedicated to securing family browsing, not dissident traffic.

Plus, the easy-to-understand  privacy policy says that the company collects limited information about you for the purposes of logging you in, billing and so on, but unless forced to do so in law, will not share your information with any third party. It no longer requires your name, only an email address, though if you pay by credit card it will store your last name and have your address and bank details.

The only anonymous payment method is BitCoin. Sadly the Jars of Honey option is – alas – a joke, so any beekeepers hoping to cash in on their surplus need not apply.

There’s also an explicit statement declaring that TunnelBear does not log your originating IP address, the IP address emerging from the other end of the VPN, DNS traffic, or the apps, sites, or services you access while connected. So, no information is kept which could identify websites you’ve visited or what you’ve done while using the service, such as downloading files or streaming video.

Connections are very quickly established each time, with an animation of the tunnel and a bear popping out of the end of the pipe when established. We suffered no connection drops at all during testing, and connections were fast enough to watch HD video without any glitches. We ran multiple speed tests on different days and at different times and found that some servers were up there with the fastest VPN services, but others lagged behind for download speeds in particular.

For example, when connected to the US and Canada servers we never saw more than around 30-35Mb/s, a huge drop from our 100Mb/s leased line in the UK. But, that was still quick enough to watch Parks & Recreation on Netflix.

We also saw no IP or DNS leaks using multiple testing tools, so we’re happy that our identity and true location were always masked.

The big question for any VPN for home users is always Netflix. Getting around geolocking technologies is a major use for VPNs, and we’re happy to report that at the time of writing, Netflix US content is indeed accessible to UK subscribers using TunnelBear. Simply select the US server and connect. It’s really that simple.

The bad news is that TunnelBear did not unblock iPlayer in our tests, and we’ve seen plenty of other reports that this is wasn’t limited to just us during our testing. So if you hoped to use TunnelBear to watch BBC shows outside the UK, it’s best to look elsewhere for a VPN.

There is, however, support for P2P – torrenting – so you can now use TunnelBear to download files with a P2P client, and it also works with the TOR browser. Neither of these features will be of much interest to most people considering TunnelBear, but they’re bonuses nonetheless.

In terms of tech support, there’s no live chat. That’s a shame. Instead there’s an online help portal which should answer a few common queries, but you can contact the support Bears via a web form and responses are guaranteed within 48 hours, but are often much faster than that.

So long as you don’t need to run a VPN on your Amazon Fire TV Stick or access BBC iPlayer, TunnelBear is a fine choice. It doesn’t log any incriminating data, and couldn’t be easier to use.

We found the service to be ultra-reliable and fast, and had no issues watching US Netflix. Ultimately, while not the cheapest VPN service, TunnelBear is a good choice for anyone who wants online privacy and security on public Wi-Fi without needing any technical knowledge whatsoever.