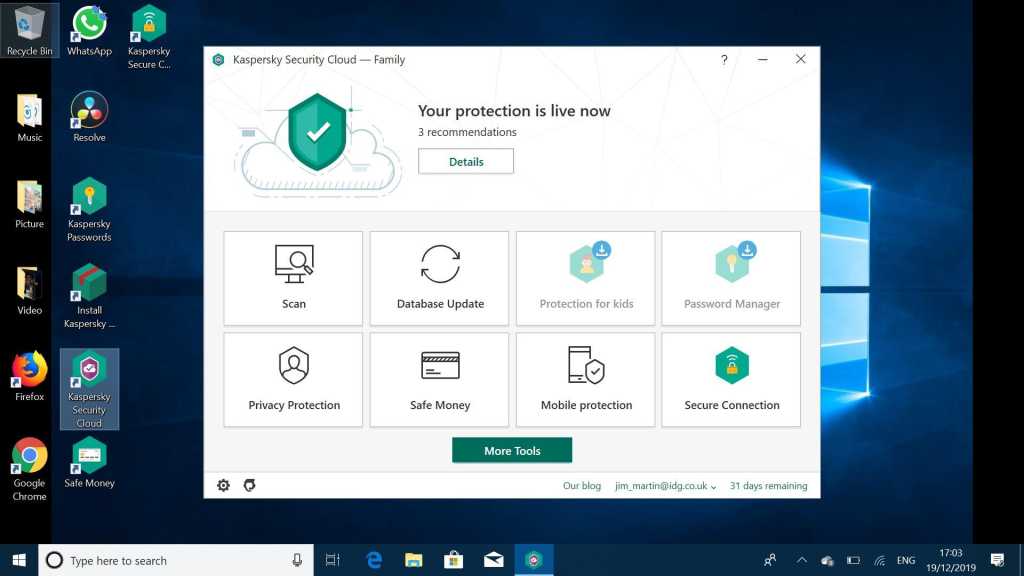 Kaspersky Security Cloud is ideal if you have multiple Windows laptops or PCs to protect. It also includes apps for Android and iOS, but it’s only if you’ll use the password manager and parental controls that they become valuable.

Kaspersky is one of the biggest names in antivirus, but as with all modern security software the company now offers far more than virus protection. Head to Kaspersky’s website and you’ll struggle to find Security Cloud. The company instead directs you to Kaspersky Total Security.

Security Cloud is the flagship, though, and offers the most features. In some ways it can be hard to tell the difference between the two, but the clue is in the name. And in this case, Cloud refers to the fact that this is a security product that protects you (and your family) no matter where they are or which device they’re using.

That means protection from viruses, protection while you’re shopping, protection on public Wi-Fi, from ransomware and malicious apps that try to use your device’s camera and microphone: essentially the kind of security you need in 2020. 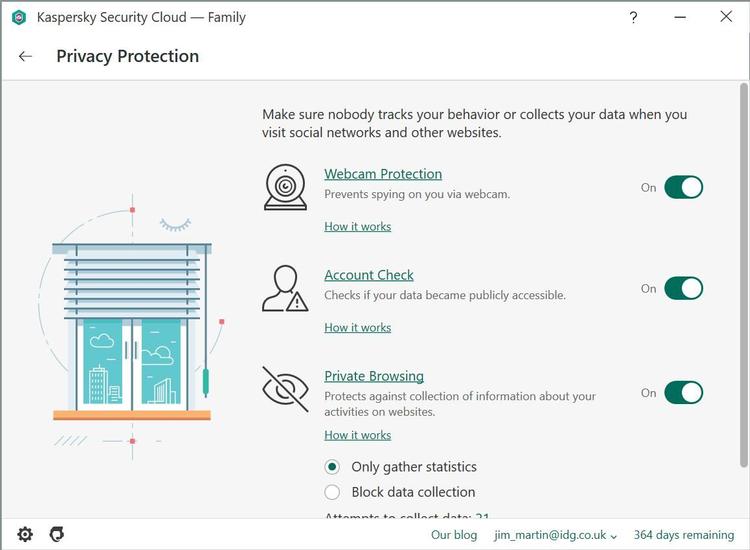 Security Cloud is also adaptive, which means that settings are automatically changed on devices to ensure the best-possible protection without you having to do anything. Plus, the My Kaspersky portal lets you manage devices from anywhere.

As you’d expect, Security Cloud includes the full suite of Kaspersky products so there’s performance optimisation tools, a password manager, a VPN (powered by Hotspot Shield) and parental controls. There’s also an alert system which tells you if your personal data is ever leaked to public databases.

There are two choices when buying Security Cloud: Personal or Family.

The former is aimed at individuals and offers plans for 3 or 5 devices. Windows, macOS, iOS and Android are supported. For a single year, prices start at £49.99 / $89.99, but there are often discounts which make it a lot cheaper. Note that the parental controls are not included with the Individual subscription.

The main difference between Security Cloud and Total Security is that the former contains patented adaptive security technology, which automatically adjusts your security settings and advises you (the account owner) based on current activities. 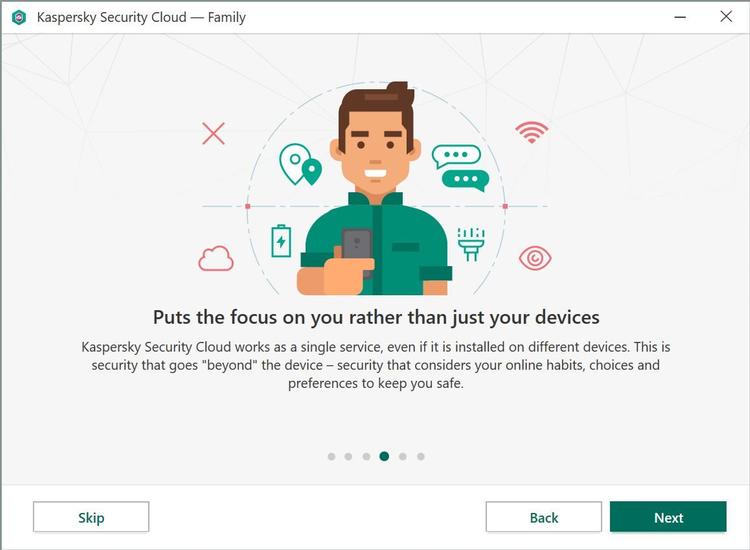 One of the features which goes above and beyond most security software is the ability to be informed when a new device connects to your Wi-Fi network. You can quickly browse the list of devices connected to the network and get instructions on how to block unfamiliar devices. It isn’t as simple as clicking a ‘Block’ button because you need to log in to your router and use its settings to block specific MAC addresses, but at least Security Cloud will tell you the friendly name of the device along with its MAC address. 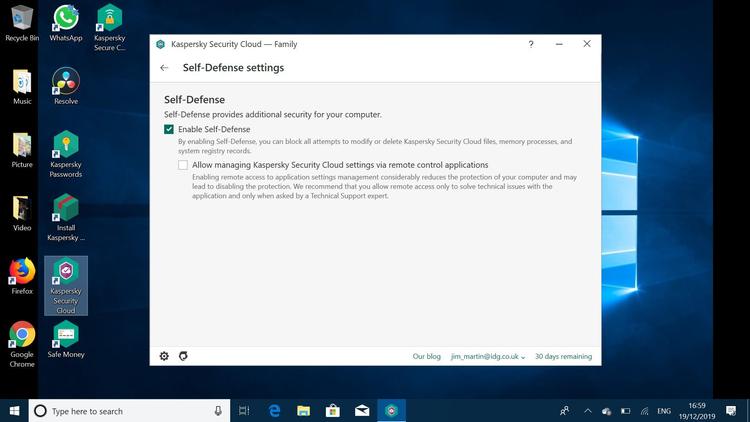 Also, connecting to websites that don’t have proper security certificates also generates a pop up. This means that you shouldn’t be fooled by fake sites which create their own bogus certificates to trap the unwary.

Another nice feature comes in the password manager, which must be installed separately – it’s not an integral part of Security Cloud. A strength indicator pops up when you enter a password. This works locally, so your password is never sent anywhere for analysis, and basically analyses the password’s complexity.

You can also choose to be informed if you’re using the same password for different sites, and there’s the usual password wallet to store them all with one master password or your fingerprint if your device has a scanner. We like the digital vault feature for safely storing a copy of your passport, driving licence and other sensitive documents.

Browsing protection is one of the privacy features, but although it’s enabled by default, you’ll still have to go to the extensions or add-ons manager in your web browser and enable Kaspersky Protection to benefit from its anti-tracking – that’s not done automatically. 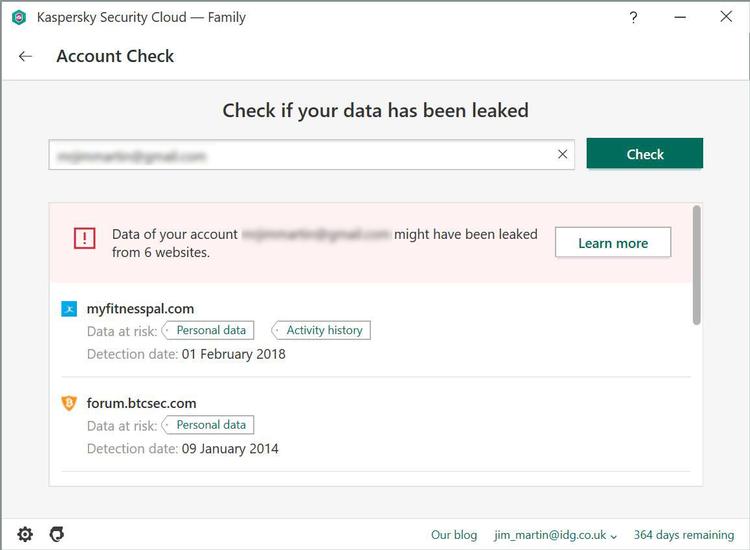 Account Check is similar to the hacking protection found in certain rivals’ products. Except where some are able to search the dark web to find out if any of your logins or financial data is available for sale, Kaspersky’s only checks public databases. And that’s something you can easily do yourself for free with sites such as haveibeenpwned.com. In fact, that site returned 13 breaches for the email address we entered, where Kaspersky Account Check only listed six.

At least it automatically checks any email addresses you enter when you log into websites.

Lastly, in terms of the protection features that is, there’s also a protected browser which you’re prompted to open when making any online payments. You can set up a whitelist of sites you want to use this for, and there’s an on-screen keyboard which you can use to prevent keyloggers from recording any login details.

Yet another extra feature, if you’ve every mistakenly installed a browser toolbar when installing software, then rejoice. Kaspersky Security Cloud gives you the option (enabled by default) to only install software and not adware when downloading anything.

Having a VPN as part of your antivirus package is becoming common, and Kaspersky includes one with Security Cloud. It uses Hotspot Shield’s network and offers a relatively generous 500MB per day data allowance, per device.

Unfortunately, you quickly run into its other limitations. There’s a teaser list of the countries you could connect to, but clicking on any of them tells you that “Locations are limited. Get subscribed and connect through whatever country you want.” 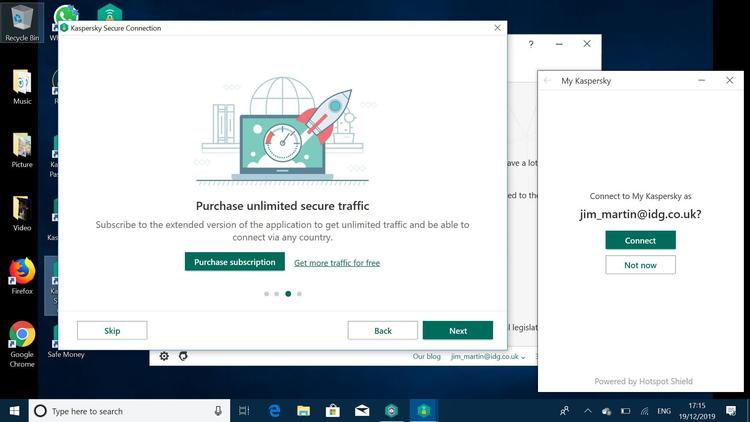 That means it isn’t possible to use the service to unblock sites or services in specific regions, and is really only good for security on public Wi-Fi and general web browsing.

Each time we connected using the ‘Select automatically’ option, it used the Ukraine server. Fortunately speeds were pretty good, and we saw around 55Mbps download and 67Mbps upload.

Kaspersky Safe Kids is included with the Family version of Security Cloud. It’s a valuable addition as rivals such as Qustodio charge around $55 per year for a similar service.

Any parental control app deserves a review in its own right as these are complex services. However, suffice to say that Safe Kids is one of the better options out there.

It offers good content filtering and app blocking, as well as allowing you to enforce a screen time limit across all the devices a child might have access to. It’s a bit limited as you can’t set a time limit as well as a schedule for when kids can use those devices: it’s one or the other – something Kaspersky should look to resolve in a future update.

Security Cloud uses the same antivirus engine as Kaspersky’s other products, so while there are more features, actual malware protection is exactly the same across the board.

And that is no bad thing. In AV-Test’s most recent report, Kaspersky Internet Security version 20.0 received perfect scores, successfully blocking 100% of malware – both known and zero-day attacks.

It also scored 6 out of 6 for performance and usability, meaning it offers excellent security without compromising your computer’s performance in the process. There’s also a gaming mode, which you can find if you dive into the settings. This is handy because it prevents a routine scan or any other operation from starting in the background while you’re playing a game and so ensuring you have as much of your system resources available as possible.

You can download the Kaspersky Security Cloud app on your Android and iPhones. Like the Windows product, there are rather too many licence and other agreements to accept before you can use it, and it’s also annoying that it forces you to allow it to access your list of contacts. It states that it requires access to enter your email address in the first-time run, but then fails to do so and you have to enter it manually.

Oddly, you have to install Kaspersky Internet Security separately – anti-virus protection is not part of the Security Cloud app. Plus, the Password Manager and Kaspersky Safe Kids are also separate apps, so you’ll need to install all four to access all the features available in your subscription. 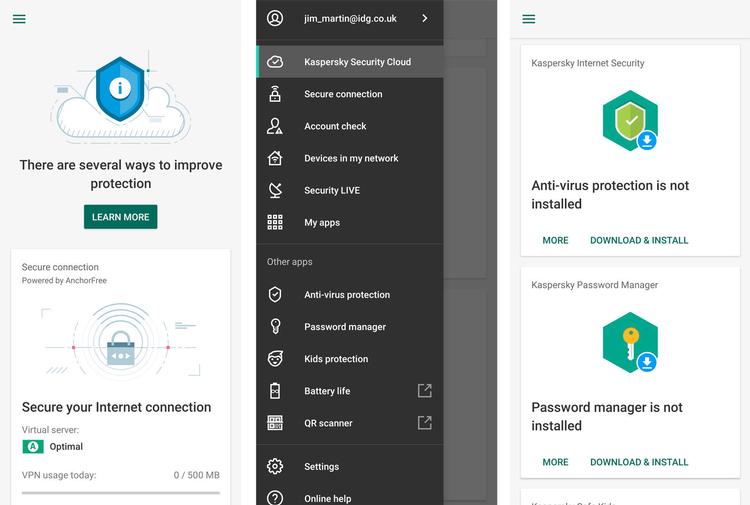 It’s relatively well known that Android viruses exist, so it’s worth installing the Internet Security app. And it also lets you create a secret phone book, remotely lock and locate your phone if it’s stolen, plus filter phone calls and text messages.

A Security LIVE section within the app offers suggestions on how to keep your device more secure. These can include tips such as turning off visible passwords, preventing malicious apps taking screenshots with visible login details.

Perhaps the most useful mobile tool is the VPN, and this can be set to enable itself whenever your phone connects to an unsecure Wi-Fi network.

But it’s worth noting that there are free VPN services (try ProtonVPN) and free password managers ( LastPass, for example) and you can download the Kaspersky Antivirus app and get free malware protection for your Android devices, so the mobile apps aren’t really adding much value unless you want to use the parental controls.

With fantastic malware detection and a huge list of features, Security Cloud is a great choice for those who have multiple devices to protect. You’ll get better value from the packages if you’re protecting Windows devices, as the mobile apps don’t really add a lot that you can’t get for free elsewhere.