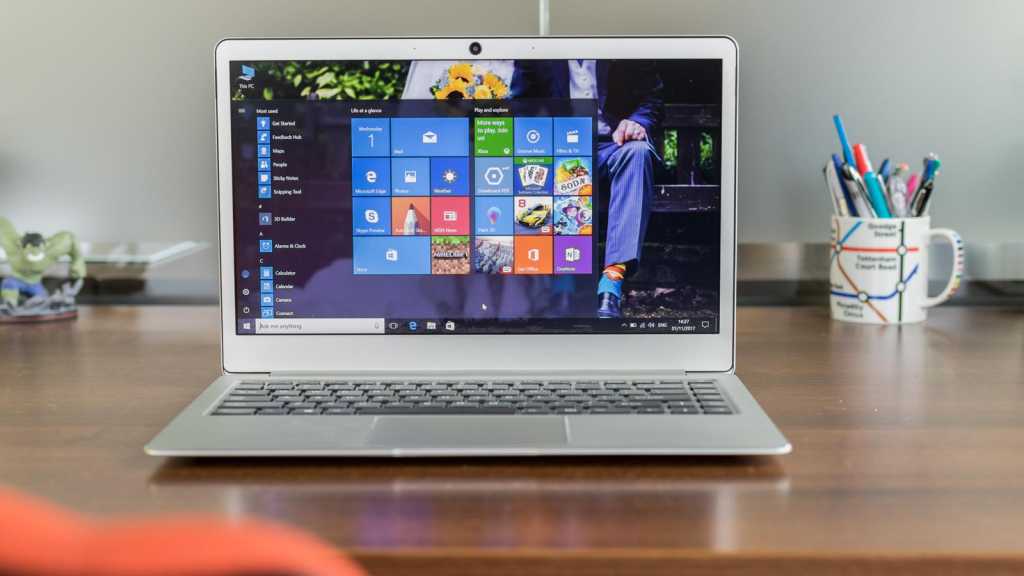 The Jumper EZBook 3 Plus is a decent laptop for what you pay, but you can get much better value when buying Chinese laptops. Despite its smaller screen and lower storage capacity we actually prefer the Pro model, and that costs just half the price. Nevertheless this is a capable laptop for everyday computing tasks, provided you don’t throw anything too intensive at it.

Chinese laptops can offer quite usable specifications at rock-bottom prices. The same is true of this Jumper EZBook 3 Plus, which has a 14in Full-HD screen and Core m3 processor, 8GB of RAM and 128GB storage at a shade over £400.

It’s the bigger brother to the EZBook 3 Pro, which has a very similar design but smaller 13.3in screen and Intel Apollo Lake Celeron N3450 chip inside. It also has just 6GB RAM and 64GB storage, but you’ll find the Pro at half the price. And that makes this Plus model seem rather expensive, even at £400.

The Plus is available from GearBest for £402.96/US$554.67/€462.07 at the time of writing. Note that it’s shipping from the Chinese warehouse, which means you’ll be liable for import duty if buying it in the UK. This is calculated at 20 percent of the value on the shipping paperwork, plus an admin fee of around £11.

Buying from China does have some risks, given that your consumer rights differ to what you get in Europe. You may find obtaining aftersales support more difficult, and you’ll almost certainly face longer delivery times. But if you are willing to take those risks, you’ll likely get a great deal more for your money than you would back home.

The EZBook 3 Plus runs Windows 10 Home 64-bit with both Chinese and English languages installed.

The EZBook 3 Plus impresses on many things at this price, but its design is not one of them. While it has a larger 14in panel than the Pro, full-HD in resolution, able to lay back just as far, and with a matt coating that’s useful in direct sunlight, Jumper has switched out that device’s IPS panel for a TN screen. The difference between the two is clear to even the untrained eye. It’s dull, with washed out colours and poor viewing angles. We don’t love it.

The chassis, despite being built from aluminium with a fanless design, is similarly uninspiring. As with the Pro it has no obvious taper at the front edge, which means working out which way you open the lid takes some concentration. The lack of fans and inclusion of solid-state storage does mean its silent in use, of course, and it doesn’t get overly warm under load.

But it’s not all bad, and to be fair it’s difficult to be overly critical of a £400 laptop with the specification you get here. We like the slim bezels around the screen, which combined with the metal build make the EZBook appear more expensive than it is. We also like the large touchpad and roomy keyboard, in which keys are well-spaced, well-sized and reasonably quiet in use.

The touchpad is significantly easier to use than we’ve seen on other Chinese laptops, such as those from Chuwi. Touchpad blocker software is also preinstalled and runs at startup, though it’s easy to remove.

Unfortunately for UK users it’s a US keyboard, but this is a common complaint for Chinese laptops. The keys aren’t backlit either, which may make working at night or in poor light more difficult.

Weighing in at 1.3kg the Jumper is reasonably portable for a 14in-screen laptop, and not too chunky at 13mm thick. If you will be taking it on the road, however, be warned that the 4800mAh battery won’t last you more than around half a day, and the EZBook uses a proprietary charger via a DC jack.

We’d love to see USB-C for charging, but no such port is offered. Instead you get two full-size USB 3.0, Micro-HDMI (handy if you want to mirror your laptop’s screen on a TV or projector), and a microSD card slot. This isn’t your only option for storage expansion, of course, since you can also plug in an external hard drive to one of the USB ports, but the 128GB internal SSD is reasonably generous at this price.

Other connectivity options include dual-band 802.11ac Wi-Fi and Bluetooth 4.0.

There’s also a 3.5mm headphone jack for audio, and Jumper has fitted four speakers for ‘360-degree surround surround’. The volume is quite good, but the quality is nothing to get excited over. The same is true of the webcam, only 2Mp in resolution but handy to have if you’ll be using Skype or a similar video-chat service.

Most budget Chinese laptops that run through the Tech Advisor Test Centre run the Intel Celeron N3450, an Apollo Lake quad-core chip with a 1.1GHz clock speed able to Turbo Boost to 2.2GHz. It’s integrated with the 200MHz Intel HD Graphics 500 GPU, and has a TDP of around 6W. This is the chip used by the cheaper EZBook 3 Pro.

The Plus, however, runs the Intel Core m3-7y30 processor, which is a dual-core chip based on the Kaby Lake architecture. In some ways it is superior – and therefore more expensive – with a 4.5W TDP, support for hyperthreading, integrated 300MHz Intel HD Graphics 615, and a 4MB rather than 2MB cache. It has a lower base clock speed at 1GHz, but can Turbo Boost higher to 2.6GHz. The Core m3 chip is also more energy efficient, though the Celeron is better for multitasking thanks to its four cores.

Unfortunately you’re just going to have to take our word for the fact that performance from these two 14nm chips is much the same, because while the EZBook 3 Plus was happy to run every other app we tried it had a bizarre aversion to all our benchmarks, even after several factory resets. The only test that would complete was the browser-based JetStream JavaScript benchmark, in which the Jumper recorded 105 points.

So what does that performance look like in the real world? To put it bluntly, no Chinese laptop at this price is going to blow you away on its raw speed. The EZBook 3 Plus is capable for everyday computing tasks, such as browsing the web, checking emails, enjoying social media and watching movies. But it isn’t built for intensive tasks – nor multiple tasks – and you’re not going to be doing any hardcore gaming either.