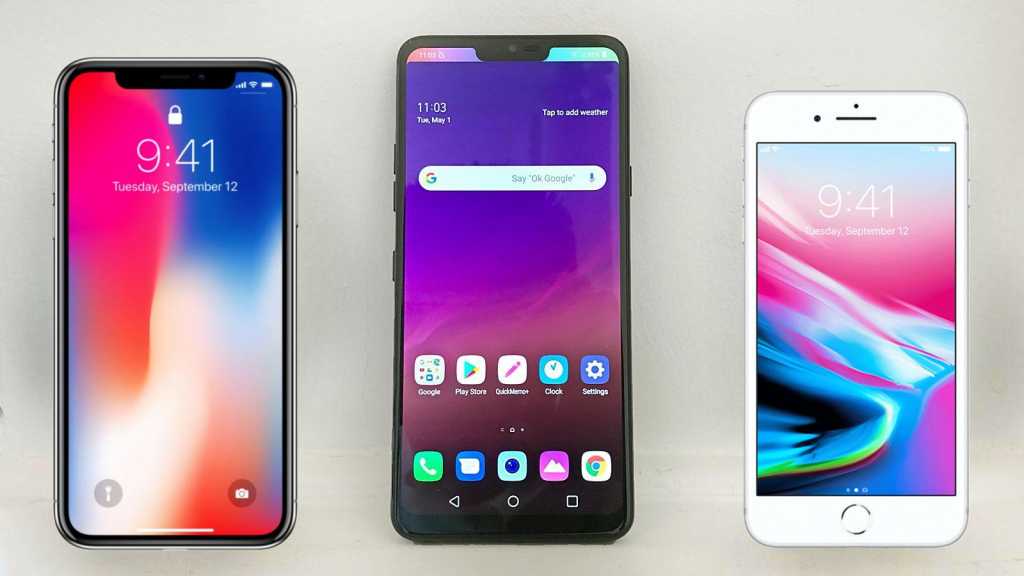 The G7 costs less than the iPhone 8 Plus and iPhone X, yet is a very capable phone. It has a great screen, great performance and a surprisingly loud speaker. If you’re looking for a sensibly priced Android alternative to the latest iPhones, the G7 certainly isn’t a bad choice. However, we’ve yet to run our full suite of tests on it yet so still need to confirm battery life, screen brightness and camera quality.

It’s clear that phone manufacturers are yet to figure out a way to produce a completely ‘bezel-less’ display. LG’s G7 is the latest to feature a notch at the top. We take a look at how its specs differ from the latest iPhones, including the iPhone X.

As ususal, LG didn’t announce any official pricing for the G7. But the first pre-orders confirmed our suspicions that it would be under £600 – £594 to be precise, from  Unlocked-Mobiles. It’s more expensive from  Clove, which has listed the G7 for £629. It will go on sale on 31 May.

The ‘ThinQ’ is part of the name – this isn’t a special version of the G7: it’s the only version.

So the G7 is cheaper than all three iPhones.

There’s nothing revolutionary about the G7’s design or build, but it’s a noticeable improvement over the G6 and has the premium feel you’d expect from a flagship.

Loyal LG fans will notice a fair few changes: the fingerprint scanner is no longer a power button, there’s an extra button on the left (for the Google Assistant) and there’s a glass back instead of aluminium.

The iPhones also work with the Qi standard and similarly have glass back and front. 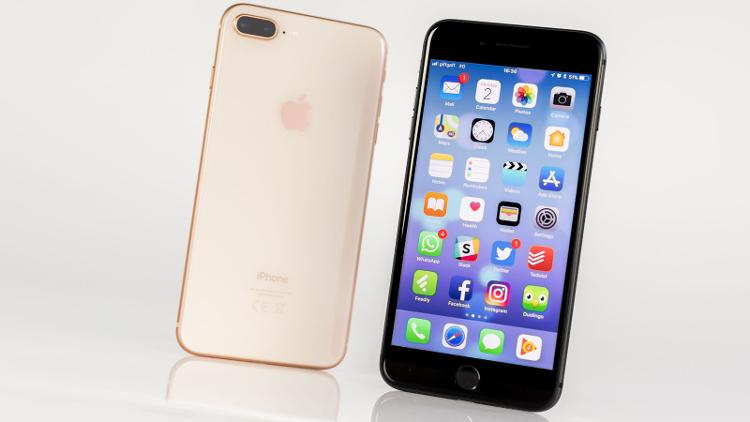 All these phones are water-resistant, but only the G7 has a traditional headphone socket. And like the Galaxy S9, which also retains the much-loved minijack, the LG has a microSD slot for adding to the internal storage cheaply and easily.

No change in the Apple camp: you’re stuck with the storage in the model you buy. So if 64GB isn’t enough, prepare to dig deep to pay the extra for the 256GB model – there’s nothing in between.

We’ve said it in our iPhone 8 and 8 Plus reviews, but there’s no denying the chunky top- and bottom bezels make these phones look dated and could be something of a dealbreaker for anyone wanting something that looks ultra-modern.

For more on the iPhones, see our iPhone X vs iPhone 8 comparison.

The G7 has a great screen, a 6.1in IPS panel with a resolution of 3120×1440. That’s higher than the iPhone X’s, but it also makes the G7 a fair bit taller as LG hasn’t managed to make the bottom bezel as small as Apple has. It says this is because the electronics required for an LCD screen are bulkier and harder to place behind the screen than OLED, which the iPhone X uses.

What’s impressive is its maximum brightness of a claimed 1000 nits. That’s a good 30 percent brighter than most phones with an IPS screen, and it makes it that bit easier to read in sunny conditions. 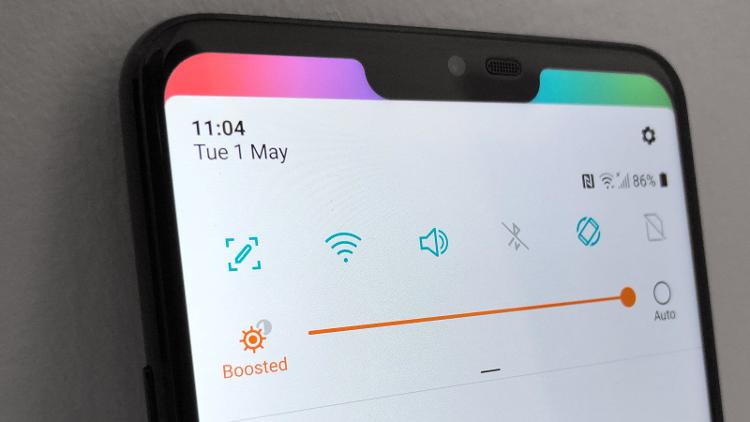 It also allows LG to call it an HDR display, and it has a claimed colour gamut of 100 percent of the DCI-P3 standard.

Only the iPhone X supports HDR video, but that’s not to say the 8 and 8 Plus don’t have great screens: they do. They’re just more limited on resolution, especially the 4.7in model.

What the iPhones have – which the G7 lacks – is True Tone, where the colour temperature is adjusted based on ambient light. This makes whites – and colours – look accurate no matter the time of day or the type of artificial lighting. 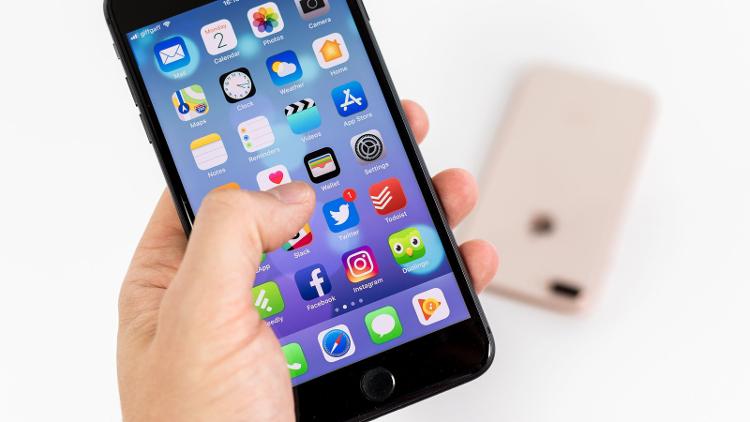 LG gives users a TV-like choice of modes including Cinema, Sport and Eco. There are sliders to adjust the red, green and blue levels (which is how True Tone works) but it’s all manual.

Don’t forget, too, that the iPhones support 3D Touch which lets you push hard on the screen to navigate around iOS

The term ‘AI’ is being thrown around rather readily these days, a bit like ‘HD’ was a few years ago. Marketing departments appear to be falling over themselves to brand anything and everything as ‘AI’, and LG is no exception.

Interestingly, unlike Huawei’s approach with the Kirin 970 chip in the P20 Pro, Qualcomm hasn’t dedicated a specific part of the 845 to AI or machine learning but instead spreads the load across the CPU, graphics chip (the Adreno 630) and the Hexagon digital signal processor. This makes it more flexible, but it isn’t as fast as Huawei’s ‘NPU’ for certain tasks.

Apple, more sensibly, dials down on the AI rhetoric but all three recent iPhones have the A11 Bionic chip which (like the Kirin 970) has a dedicated neural processor.

All of these phones are seriously quick in benchmarks, and feel ultra-responsive in real-world use as well. And you’d expect that at these prices.

The rest of the hardware is cutting-edge too, from their 4G LTE modems to 802.11ac Wi-Fi and Bluetooth 5. NFC is present on the G7, but on the iPhones it’s only for Apple Pay.

In case you’re into analogue audio, the G7 has a built-in FM radio too. Talking of audio, the G7 is the only phone here not to have stereo speakers. Instead it goes for a larger mono speaker which uses the whole phone as a resonance chamber. It’s definitely louder than the iPhones and there’s more bass, but you won’t be throwing away your Psyc Monic Bluetooth speaker anytime soon.

This table shows how the main specs of the G7 stack up against the iPhone X.

For many people, photo (and video) quality is a crucial factor when choosing what to buy. The iPhone 8 is the only one that has a single rear camera, with the other two offering an additional telephoto lens and the option to blur out backgrounds for attractive-looking portrait photos. 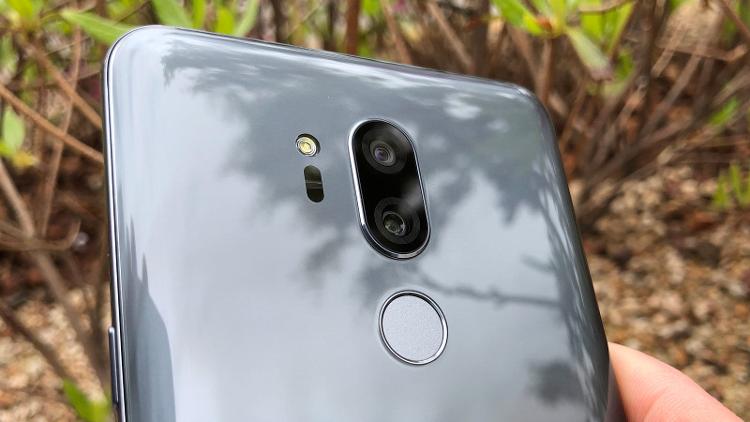 The G7 also does this (including for the front camera) but opts to pair the main 16Mp rear camera with a wide-angle lens, giving the opposite effect to a zoom lens. That’s great when you can’t move further back, but the iPhones (and just about every other phone) get around this by offering a panorama mode which automatically stitches multiple photos together for a super-wide photo.

We’ve only tested a pre-production G7 with early software. So although we’ve seen some signs the cameras will deliver decent quality, we can’t compare the photos we have with the iPhones’.

The AI CAM mode is supposed to detect what’s in a scene and then optimise settings and processing to make it the best-possible photo. Unfortunately, as with Huawei’s system, what actually happens is that it ramps up the saturation to crazy levels and makes everything look unnatural. Again, we’re hoping this will be fixed in the final software.

Apple has always adopted the ‘keep it simple’ approach with its camera app, so there are very few options. This is the best approach, too, since you rarely want to fiddle about adjusting anything – the priority is to capture the moment. 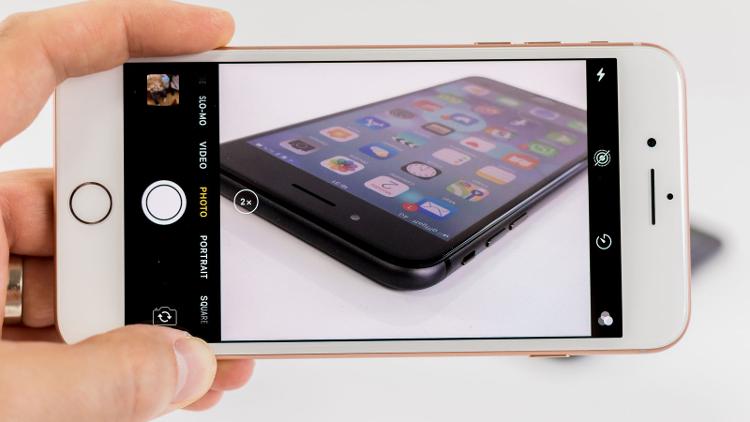 And all three iPhones do a great job of that, with dependable quality in all but very low light. This includes both photos and videos, with excellent stabilisation, focus and exposure.

Where the G7 scores is with its Super Bright mode. It combines each group of four pixels to make one pixel in the final image. This pixel-binning technique means you get only a 4Mp image instead of 16Mp, but the results are quite impressive: photos taken in the dark look as if they were taken in bright light.

We’ve been impressed with the G7’s selfies, but the iPhones also do a good job too.

Android Oreo vs iOS 11? We’re not going to go into the details here as we’ve compared the two OSes separately, but suffice to say that most people already know which they prefer. Importantly, they’re not really that different and it isn’t difficult to jump ship and move from one to the other.

The vast majority of the time you’ll probably use free apps anyway.

What’s relevant here is how Android handles the G7’s notch. In the time we’ve spent with the G7 (and the Huawei P20), it’s no worse a user experience than on the iPhone X.

There are still plenty of iPhone apps which don’t work properly with the notch (or even the taller screen) and so present as a smaller window with borders around the edge. And so it is with many Android apps. 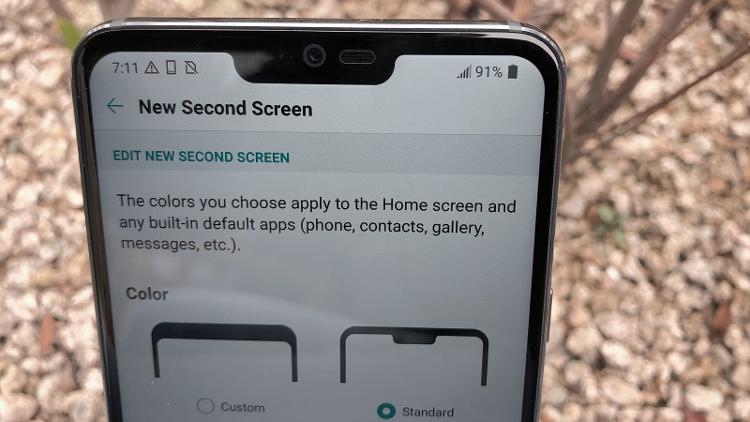 In Android P, Google is implementing support for screen notches so apps will handle them better. For now, your options on the G7 are just like on the P20: you can hide the notch by making the screen either side black. Notifications are still shown, but it appears as a separate area, hence why LG calls it a ‘New Second Screen’.