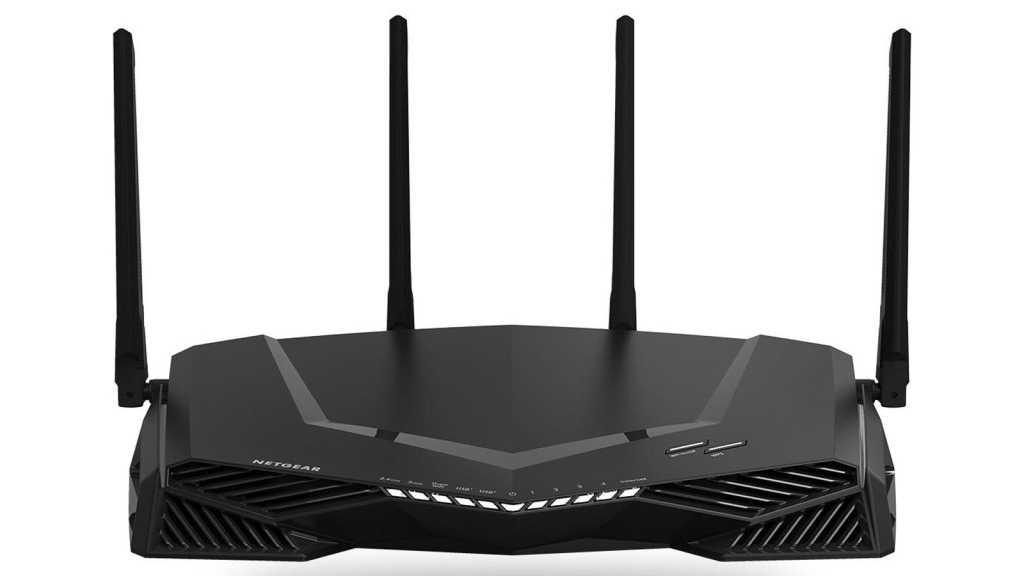 As gaming routers go, this is a spectacular one. The DumaOS brings the XR500 into line with the operating system flexibility that you’d expect from a Synology NAS. This OS is focused on effective network management rather than providing network services, though. We’d like it to be cheaper, but that is so true of many of the most desirable devices.

There are many challenges to the online gamer, not only distant human foes. Possibly the most frustrating of these is the timing delays that inevitably intercede at the critical point in proceedings that fall under the banner description of ‘lag’.

If only the technology connecting the gamer to their network was actively working to reduce the inevitable time delays, even when that connection is via Wi-Fi. That’s exactly the thinking behind the Netgear XR500, a router that tries hard to be your networking wingman forever fighting against the relentless enemy of network latency.

That’s more than the now-discounted Linksys WRT32X-UK and a little cheaper than the ASUS RT-AC88U. Though, both of those are the higher AC3100 specification not the AC2600 of the XR500.

For more alternatives, see our list of the best routers to buy.

All these options present the XR500 as a premium product, but does it justify the additional cost?

Like many of the previous Nighthawk designs, the XR500 looks like it came out of the same Lockheed Skunkworks where the F-117a ‘Nighthawk’ Stealth Fighter was designed.

It’s been visually styled to appeal to gamers, so this is no surprise. 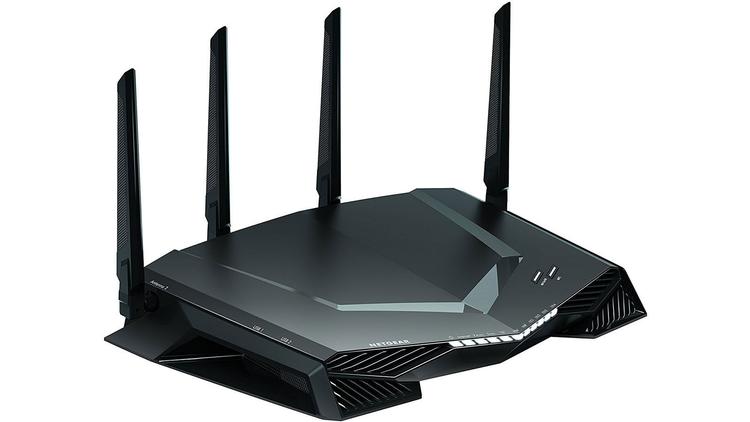 Strip away the esoteric styling, and what you have is an AC2600 MU-MIMO Wi-Fi platform that was built for Cable broadband or those ADSL users that use a separate modem (which applies to most UK users).

On opening the box we discovered that with the European XR500 two power supplies are included, one each for the UK and EU socket standards. Why Netgear preferred this option over a single convertible PSU, we’re unsure, but that’s how it comes.

The four antennas must be connected before deployment. Where the two rear-mounted antennae can be swapped out for any threaded BNC design, those on the corners have been made with extensions to reach connectors placed deep inside the case.

On the back are all the Ethernet ports (4 LAN + WAN), power on/off, reset, lights on/off and the power connection. Two USB 3.0 ports are hidden inside a recess on the left (looking front on), and WPS and WIFI on buttons are on the upper surface to the front right.

The ‘beak’ of the case is where all the LED indicator lights are, and reveal the use of the two frequency ranges, each LAN port and even if the Guest account is active.

As routers go, this is a theatrical design, but compared with what’s inside the exterior is merely window-dressing.

Development of the NetDuma operating system first started in 2011, and in 2016 it spawned the DumaOS, a router tailored OS.

The XR500 is the result of a collaborative project between the NetDuma team and Netgear, and the first branded router to deliver this unique software platform.

One of the special features of DumaOS is a technology that Netgear branded ‘Geo-Filter’, which aims to connect online gamers to the server that’s the geographically nearest and not the first that responds to a connection request. 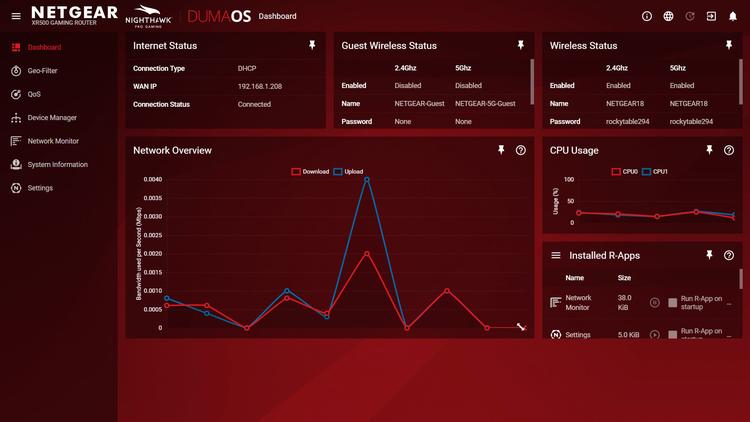 The range of titles this works with includes World of Warcraft, Call of Duty: WWII, Destiny 2, Overwatch and eleven other popular online titles.

Out only reservation about this functionality is that for many titles the servers are now regionalised by the publishers, and it is usually only a problem that those in the USA suffer.

For most European gamers there is only one local server, but in the US it is possible for players to be allocated one on the opposite side of the continent. 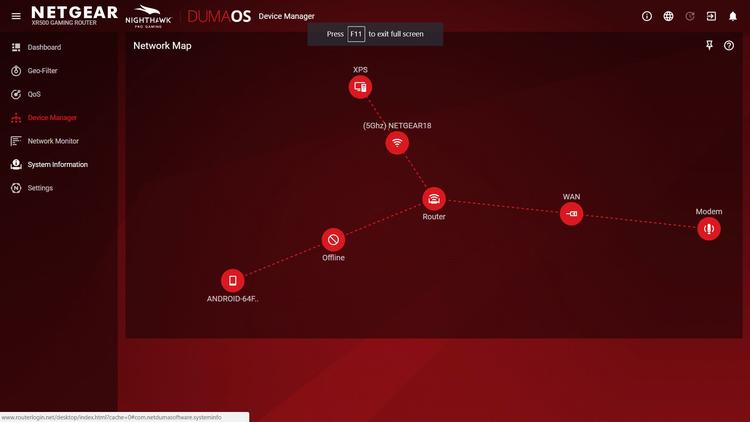 Features that more gamers will appreciate are those that allow the administrator to control bandwidth allocation by connected device. This implementation exceeds what would normally be considered QoS (Quality of Service), where the aim is normally balancing.

At one level these controls avoid a device gate-crashing the router and impairing the gaming experience of existing devices, but it is also designed to make the best use of resources when there are multiple priorities.

DumaOS also has support for OpenVPN, for those that like secure connections , and the best protection against those who initiate DDoS attacks on connected gamers.

Where the XR500 is different from other routers is that the management controls here are meant to be reviewed on a regular basis, as this isn’t a fire-and-forget solution. 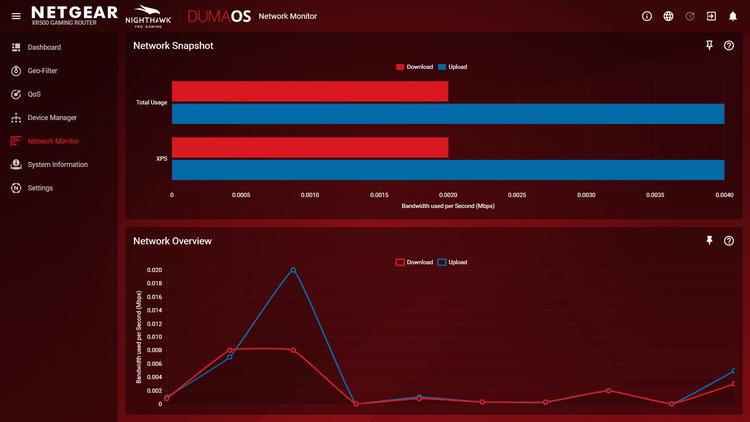 You are actively encouraged to visit the interface on a regular basis to tweak the environment as it changes, providing a challenge to maintain the optimal experience.

If you don’t like the tinker, then the XR500 probably isn’t for you, as it can soon become a Tamagotchi-like challenge to create the perfect configuration.

We’re inclined not to offer definitive performance values for wireless technology, mostly because it’s very environment dependent. What works well in our offices or homes, doesn’t always translate into the same performance elsewhere.

What we can say is that the XR500 is a good general performer especially on the 2.4GHz frequency range. Like so many routers that use the Qualcomm Atheros QCA9984, the 5GHz range is decent but not exceptional, and that weakness also impacts very slightly on the maximum performance at shorter ranges.

We’re only talking a small percentage less than the very best-performing equipment. And, it’s likely that the difference is down to Netgear making logical choices that deliver connection consistency over any single user.

That accepted, the user experience is very dependent on how the available bandwidth is distributed among every device attached. And, the DumaOS interface allows this to be finely honed to deliver the best performance for a range of attached devices, in ways that most other routers only aspire.

The chosen Wi-Fi chips are also used by Asus, D-Link and FRITZ!Box on a wide range of high-performance routers, making it a tried-and-tested solution. Netgear also used it in the excellent Orbi series and EX8000 Mesh extender, revealingly.

In overall control is a 1.7 GHz Qualcomm IPQ8065, a dual-core ARM SoC that incorporates 512 MB of RAM and also provides the USB ports.

We’ve seen plenty of ports on routers that claimed to be USB 3.0 spec that performed like USB 2.0, but not so on the XR500. Using a high-performance USB flash drive, we recorded read speeds of nearly 70MB/s and write speeds of 40MB/s.

For what’s a token NAS facility, this is more than acceptable performance and a practical alternative for those that don’t own NAS hardware.

At this price, you would expect good Wi-Fi, and the XR500 doesn’t disappoint even if it is only AC2600, and not the more exotic AC3100 or even AC5300 that some products now offer.

We might argue that the description of ‘wireless gaming router’ is a paradox. Put simply, wireless networking isn’t the connection that gamers want or need. In unison, they shout ‘give me wires’ in a deep voice that is easily lost in behind the hum of an overclocked GTX 1080 Ti.

In the XR500 much effort has been put into isolating the gamer’s data stream from other users to achieve the best possible results. It just isn’t necessary to jump through those many of those hoops with gigabit Ethernet over Cat5e/6 cabling, though.

But what if you can’t run wires? Well, Powerline networking is robust and usually reliable, and easier than cables to deploy rapidly.

However, some users don’t have an alternative to Wi-Fi. And, for those gamers, the XR500 makes much more sense in maximising potential throughput.