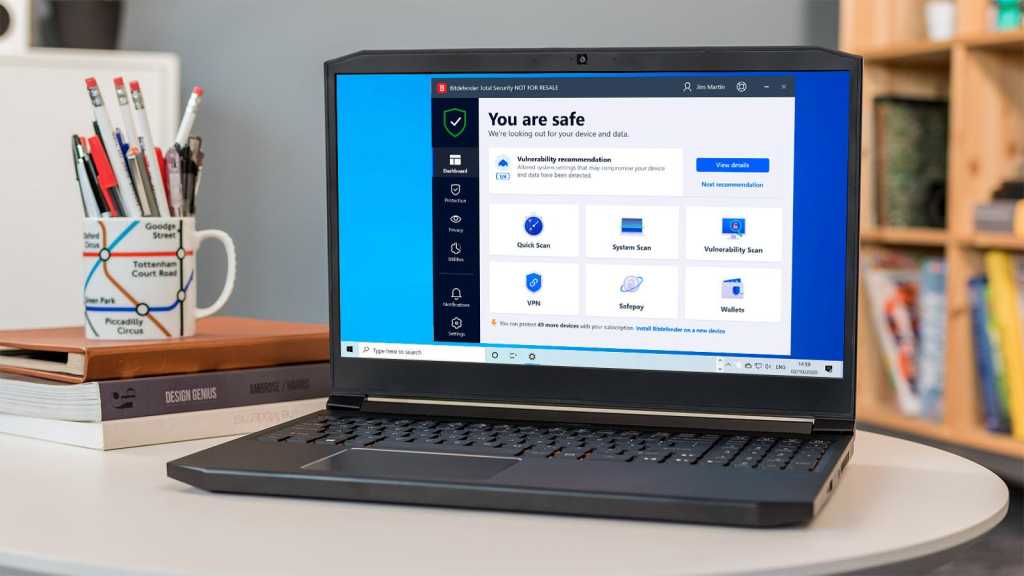 Total Security offers impressive protection and has an improved interface. The additional features, such as the VPN, password manager and parental controls are far from best-in-class but malware protection for Windows and Android is top notch.

Bitdefender has an excellent track record when it comes to detecting and blocking malware, and this remains its highlight.

This year the company has added a few useful features – particularly to its VPN – and keeps the same familiar interface which is easy to use.

Like many other security companies, the core malware protection is so good – regularly scoring 100% in independent tests – that it’s now focusing on other types of security. Not just the VPN but also the mobile apps.

At its core is a rock-solid antivirus component which has an enviable track record for its ability to detect and block all sorts of malware.

This is the same whichever Bitdefender product you buy. What Total Security adds is features such as anti-spam, microphone and webcam protection, a firewall, parental controls, anti-theft and a useful OneClick Optimizer to declutter and speed up your PC.

There’s also a password manager, a VPN service, the Safepay browser for protecting online transactions (such as making payments), an anti-tracker utility to stop web tracking and various other things including a file shredder.

It sounds comprehensive enough, but take a look at what rivals offer in their security suites and you’ll realise there’s no ID protection (now included with packages from Norton and McAfee among others), no cloud storage (a bonus with Norton 360) and the VPN and parental controls are very basic and not comparable with fully fledged products.

As standard, you get 200MB of VPN data per day, which isn’t very convenient as you then lose that protection until the next day once you’ve hit that limit. There have been a few updates to the service, though, including a kill switch (to improve privacy), split tunnelling (so not all apps have to use the VPN) and an auto-connect option so the VPN connects based on rules you set (such as on unknown Wi-Fi networks).

To start with, you’ll get an activation code and you begin at the Bitdefender Central website (or mobile app) where you create an account and then use the code to redeem your subscription. This is a handy portal where you can manage your subscription and send links to devices (or family members) so they can install Bitdefender on their devices.

The links include login details, which makes it really easy for everyone to install the app and get protected.

Install it on Windows and you’ll be presented with an clean-looking interface that tells you ‘You are safe’. For non-technical users, the default shortcuts to Quick Scan, System Scan, Vulnerability Scan aren’t particularly easy to understand.

The first does what it says, the second is a full system scan, while the third – vulnerability – checks your device for things like out of date apps, system settings that have been changed from defaults and weak passwords. There’s also a dedicated Wi-Fi scan that checks you’re not using weak encryption or authentication protocols.

If you do a vulnerability scan you’ll see a list of identified risks, along with their severity. My test PC had an out of date version of Firefox and was set to automatically log in after Windows performed an update. Those along with three others were deemed LOW risk, but in each case you can click Fix issue to take care of it.

You can, of course, edit these six shortcuts and replace them with the features you want to see. And above them is the ever-useful Autopilot which offers recommendations for actions you need to, or might want to take. The first is to turn on ransomware protection, which is simply a case of clicking Enable.

On the left-hand side are tabs for Protection, Privacy and Utilities. Notifications is a log of what Bitdefender has been doing or noticing on your system, and Settings lets you pick dark or light mode, the language and a host of other things, including turning off special offer notifications which are on by default.

The Protection tab is a lot less intimidating than it once was and is much easier to understand. Ransomware Remediation, for example, backs up important files as an extra safeguard so they can be restored if the worst happens and Bitdefender is unable to stop a ransomware attack in the first place. Though, as you’ll see, all the major antivirus testing labs found Bitdefender exceptionally good at blocking all types of malware.

One of the features exclusive to Total Security (and Premium Security which sits above Total Security) is OneClick Optimizer. This looks for disk space that can be freed up, Registry entries that can be deleted (improving Windows’ performance) and does a Privacy Cleanup, which wants to delete your browsing history, temporary internet files and cookies.

Fortunately, after analysing what can be deleted, there’s a warning to check the items before doing the optimisation. And you can uncheck cookies and other items that you don’t want to be deleted.

Another utility is Profiles. These kick in automatically when you’re watching a movie, or playing a game, for example. The different modes prevent popups, or put off housekeeping events until the software detects that they’re appropriate. All you have to do is click the Enable button if you like the sound of it.

The anti-spam module allows you to explicitly whitelist friends and blacklist real spammers and works with Outlook and Thunderbird email apps. You also have the option of automatically banning any spam written with Asian or Cyrillic character sets, and of submitting any unknown samples to the Bitdefender cloud for analysis before opening them.

Web browsing is protected by the Online Threat Prevention module. This uses machine learning and a global website reputation database to judge whether any site you visit should be considered malicious. Like the Safe Browsing service used in Chrome and other browsers, this is constantly updated, meaning that you’re technically getting global real-time protection. (This is also available on iOS and Android.)

A new feature is Deep Level Analysis, which shows you how an attack was triggered and what Bitdefender did to block it. It looks rather technical, though, and doesn’t offer clear advice to the user to tell them whether they could have done anything differently (such as not clicking on links in email) to avoid the malware in the first place.

As well as the webcam and microphone monitoring already mentioned, Anti-Tracker blocks data collection from websites. It’s ‘enabled’ by default but this misleading because that default is to only apply this protection to Internet Explorer. Who still uses Internet Explorer?

You have to click on the settings to enable it in Chrome and install it on Firefox.

As mentioned, the VPN service – powered by Hotspot Shield – is also part of Total Protection. But what you get is a cut down version of Bitdefender Premium VPN.

There’s a daily data limit of 200MB per device per day and you can’t choose which server to connect to: selection is automatic.

Bitdefender Premium Security is what you need if you want unlimited VPN data and the ability to pick from the 30 or so countries. This suite also gives you Premium technical support.

A bundled password manager allows you to set up multiple wallets, each protected by its own master password. Simply enter this master password to have logins entered automatically for websites and services. It’s relatively basic, though, and doesn’t offer two-factor authentication. Nor will it tell you if any of your passwords are weak or have been included in data breaches. Plus, using a password manager bundled with a security suite means you lose access if you stop your subscription. Instead, we recommend using a dedicated service – some of the best password managers are free, too.

The parental control features work on children’s devices that are already protected by Bitdefender. The older Premium parental controls are no more: what you’re left with are basic screen time limits, plus the ability to block apps and filter web content by category.

Filtering works fairly well, but there’s no way for a child to request access to a specific website that they think they should be allowed to use. If your child has an iPhone, Bitdefender can’t tell you what they’re using the device for, so you’re better off (if you also have an iPhone or iPad) using Apple’s built-in Screen Time controls.

The location aspect of Bitdefender’s parental controls lets you set up geo-fenced locations so you can get alerts when your child arrives at or leaves a specific place.

As usual with security apps, the Android version has a lot more features than the iPhone one.

Several useful features are included on Android. For example, Account Privacy allows you to enter an email address and have Bitdefender test it to see if the credentials have been harvested or otherwise leaked online. You must have access to the address as it sends a verification code to it.

Web Protection is on by default and protects you from dangerous web pages and supports a lot of browsers. New is a scam alert which warns you of any dangerous links found in messages – not just SMS but also WhatsApp, Facebook Messenger and others.

Anti-Theft has all the usual features (remote locate, lock, wipe, and play a noise), and also allows you to automatically take a picture when someone fails to unlock the device three times in a row. This is all controlled from Bitdefender Central.

App Lock is another handy feature that stops anyone from using apps you choose by requesting a PIN before the app will launch.

You still have that same limit of 200MB of free data per day via the VPN.

Of course, there’s also a proper antivirus component which will protect Android devices from a similar variety of threats to the Windows version.

On an iPhone you don’t get that, but you do get anti-theft features, the VPN and basic web protection which works based on a website’s main address, not specific pages.

The only new feature is an audit which warns you if security features such as Face ID are disabled, and if there is an operating system update available.

Bitdefender Total Security has an RRP of £69.99/$US$89.99, but there’s a first-year discount which brings it down to half those prices.

This gives you five licences, but you can also pay £5/$5 extra for 10 if you have more than five devices.

You can see how alternatives, including McAfee Total Protection and Norton 360 Deluxe compare in our roundup of the best antivirus software.

Bitdefender’s track record for malware protection is absolutely excellent, so is easy to recommend on that basis. However, Total Security is starting to look a little like a misnomer, especially when compared to the mega-suites offered by certain rivals.

The restricted VPN and the lack of ID protection are two key reasons for this: they can both be ‘fixed’ by paying more, but the fact is, you don’t get them as standard.

If these don’t bother you and you don’t tend to shop around for a new antivirus deal each year, then Total Security’s on-going yearly price is still competitive: others charge more for subsequent years.