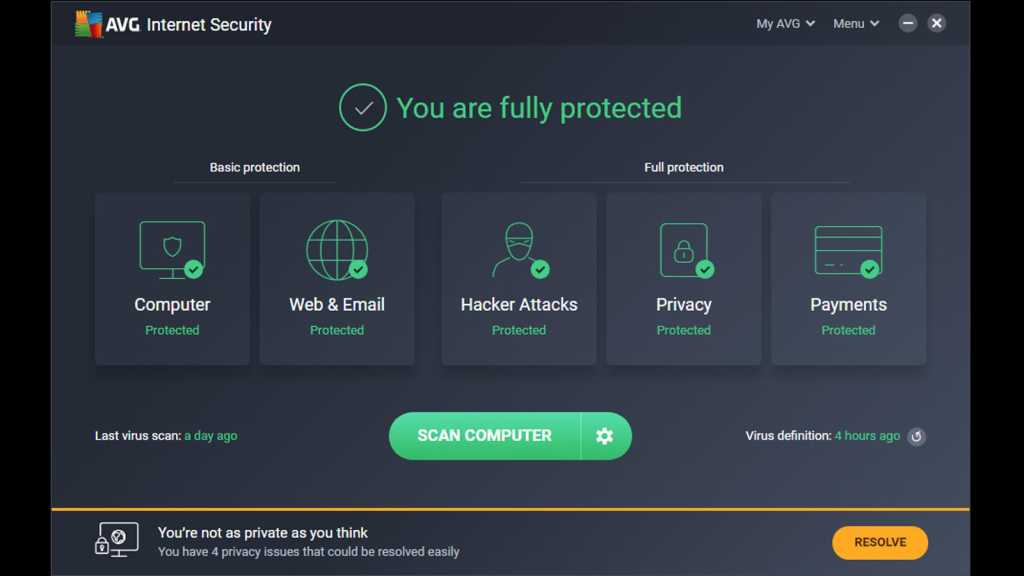 Unlimited installs and better facilities than many of its rivals make AVG Ultimate a winner for families. You’ll find a huge selection of scans available, plus tools including PC Tune Up and a brilliant Android app.

AVG Ultimate is a solid security suite that’s well worth considering if you’re in the market for new antivirus software. Here, we review AVG Ultimate and compare it with the best antivirus for PC.

With AVG being owned by Avast, we initially had low expectations after reviewing Avast Premier and finding that some key modules were only ad-supported trial versions. However, we’re pleased to report that this is a much more complete product than Avast’s Premier offering.

AVG Ultimate is £79.99/ $99 per year, and comes with unlimited installs across PC, Mac and Android, which is a great deal for families. You can sign up to AVG Ultimate on its website here.

The inevitable downside is that the integrated password manager, VPN and driver updater must all be purchased separately, but equivalents can be obtained for free or at low cost from elsewhere.

If you’re into streaming TV shows from around the world or want top-notch privacy, you’ll probably want to carefully select your VPN anyway, so this is no real loss, though the offer of a 30-day trial if you decline the AVG offering will give you a chance to check it out. The VPN works out at £4.16/$4.99 per month for a year, billed as £49.99/$59.99.

PC Tuneup is, however, included in the price. It’s thorough, and takes a while to complete all its tasks including disc defragmentation.

The laptop upon which we tested AVG Ultimate is a gaming machine, and therefore regularly tuned, but defraging the dual disc drives still took over an hour. With so many possible speed-up changes, it’s good to know there’s a rescue centre included that enables you to undo any tweaks. 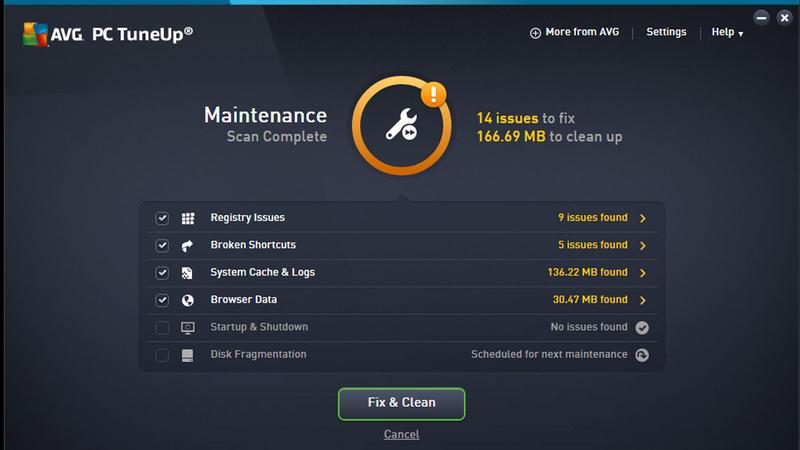 In terms of protection, on the surface there’s not a lot of change in the latest version since 2018’s offering, but there’s still a lot going on underneath. The central core of the product consists of file and behaviour shields.

The file shield scans all files when programs attempt to open them, and the behaviour shield prevents programs suddenly acting in a suspicious or malicious way. It’s good to see these so-called ‘next gen’ features making their way into domestic products.

The web shield scans all files downloaded from the internet and blocks known web attacks, and the email shield protects you from receiving unsafe attachments. You can tune the exact behaviour of these and other modules in extensive sections of the settings.

Like so many other AV products, a built-in firewall adds another layer of defence. Unlike many other products, however, this firewall allows you to see all connections made to and from your computer in real time.

This is useful for diagnostics, but for the lay person it can be quite scary to see how many connections a running Windows system has with the rest of the world. And guess what? You can resize the interface, so looking through the logs isn’t like reading a newspaper through a letterbox. Other vendors should take note.

There’s also an explicit ransomware module. This has a “smart” mode, which takes decisions about which programs to trust with access to your personal files.

Backing this up is “strict” mode, which means that you must agree to any and all actions that change or delete the files in your protected folders.It’s easy to add new folders to the protected list, but you can also ask the module to scan for potentially sensitive files to add to the list.

Also included is a data safe, into which you can place sensitive files. Encrypted with 256-bit AES technology, not even the security services would be able to look the content without having the key.

For some reason, the anti-spam shield isn’t installed by default, and requires a system reboot when you click its install button. This detects the increasingly large number of phishing campaigns plaguing the internet, as well as detecting regular spam.

It adds a custom string to the subject of all the span it detects, which you can change. There’s also a sensitivity control and you can automatically whitelist the addresses in outgoing email, as well as add to the blacklist. If you’re a Microsoft Outlook user, you can have this module automatically move spam to the junk folder.

The Do Not Disturb settings should keep you safe from intrusive pop ups while playing games, and it will even delay Windows updates until convenient. A nice touch is that any app running in full screen mode can be automatically added to the Do Not Disturb list.

Finally, the fake website shield detects bogus sites to keep you safe when accessing your bank, while shopping online, and so on. 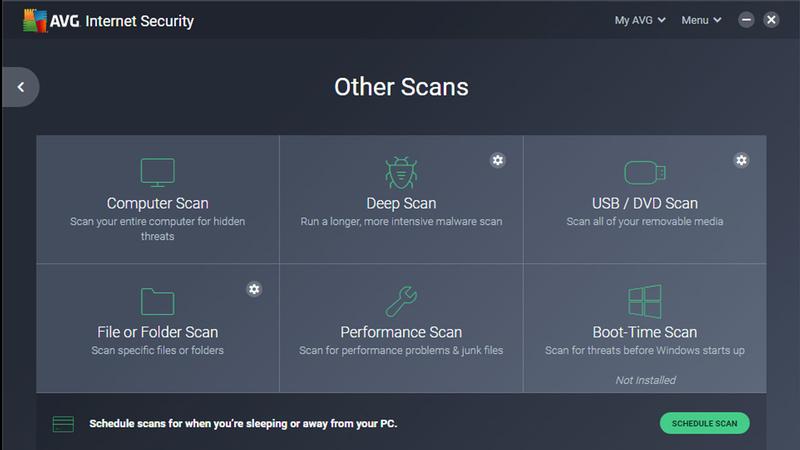 There are also several types of system scan, including a dedicated USB / DVD analysis. Like the anti-spam shield, the boot-time scan needs installing by clicking its button. It’s well worth doing so and running it every now and then.

The idea is that it will scan your discs the next time the computer is booted up, and runs before Windows (and any stealth malware) starts up. You can also right click files and scan them, or shred to delete them forever.

The Android Pro version that’s included in the price comes equipped with a grab bag of different utilities. 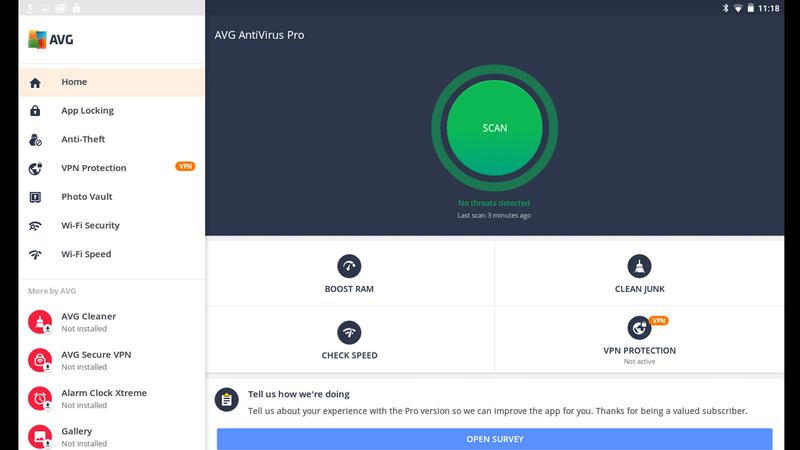 Along with scanning, you also get anti-theft to locate and remotely wupe your phone, a photo vault to keep your memories safe, a WiFi security tester, and even a handy broadband speed test. As with many other AV offerings AVG can lock apps, thereby requiring a PIN to run certain things.

You can also install the intergrated AVG Cleaner, which is free, but ad-supported, with auto-cleaning only being available in the paid version. An enhanced photo gallery is also available and is ad-supported.

Alarm Clock Xtreme learns your sleep patterns so that it wakes you at the right point in your cycle, which seems a strange addition here but some might find useful nonetheless.