We wouldn’t normally recommend a phone significantly under £150 unless you’re really strapped for cash, but the Moto E5 is an exception to the rule. This is an exceptional phone for the price, offering a surprising set of specs along with an attractive and well-built design giving the impression of a much more expensive handset. It’s not flawless and there are sacrifices but all are reasonable.

Motorola’s new Moto G6 range might be affordable phones, but the firm has also unveiled new Moto E5 devices that are even cheaper. Starting at just £119, this is one of the best budget phones around as you’ll find out in our full review.

It’s a little confusing as to why the G6 is named so while the new Moto E range is a number behind. Well the Moto G arrived in 2013 and is now on its sixth-generation but the Moto E started life a year later in 2014 so is a generation behind.

That’s a seriously cheap price for what is a pretty nice phone, making it a great option for those who can’t stretch to the higher end of the budget market.

It’s worth noting that there’s also a Moto E5 Plus that might take your interest with its 6in screen and huge 5000mAh battery. It costs £149.

There’s also a Moto E5 Play but this is only for the US market, although there are rumours of it launching in Blightly.

The Moto E5 is available  Amazon and Very. Our sample was provided by Carphone Warehouse. 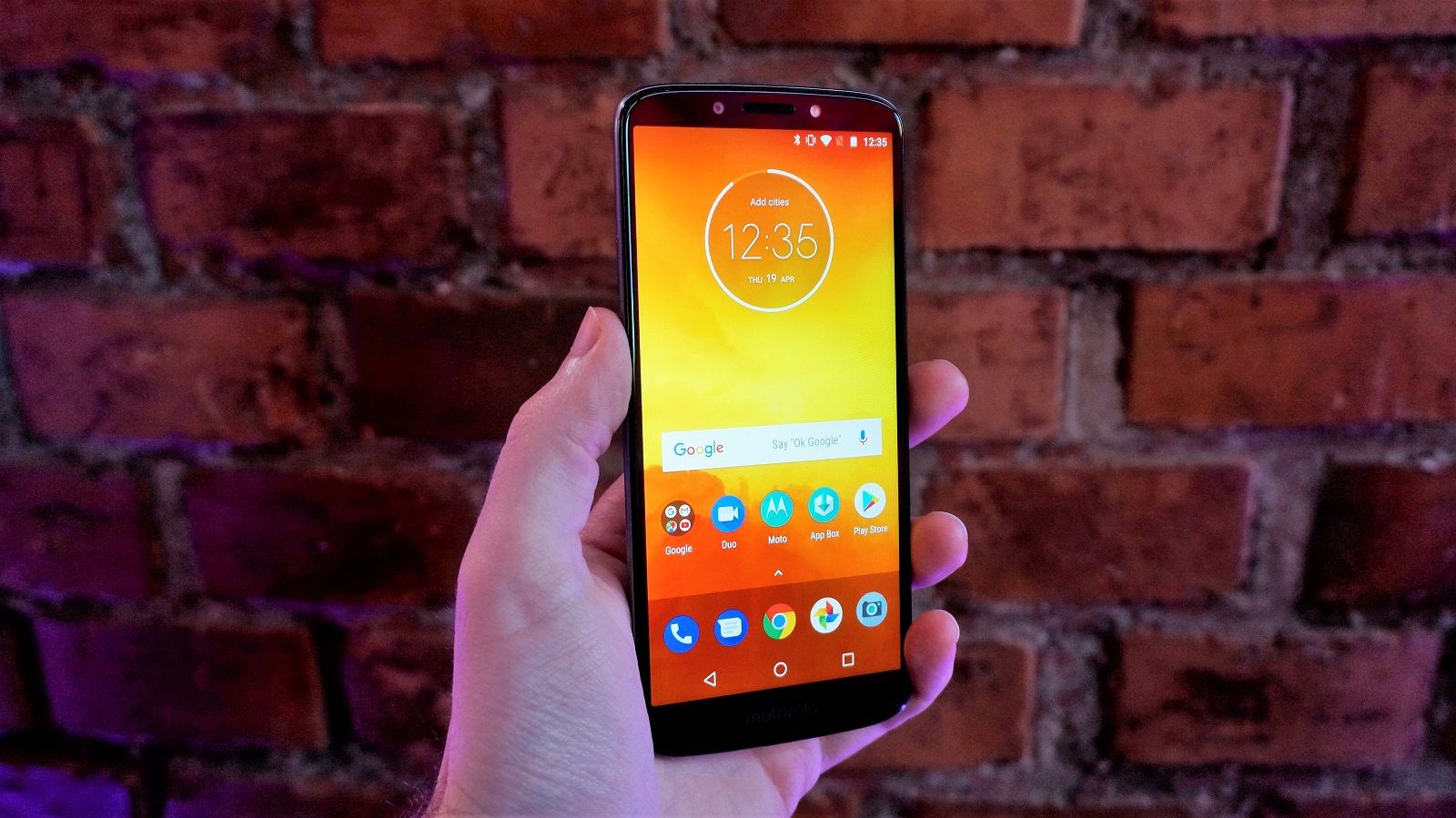 Motorola has a clear design language and this hasn’t changed for the Moto E5 series. You can see the similarity to the original yet the E5 looks like it’s a new model for 2018.

The Moto E5 looks very similar to the new Moto G6 range, especially the G6 Play at the front.  It’s fairly plain and simple with modest bezels and the Motorola logo below the screen – which is 18:9 despite being such a cheap phone.

At the back things are more interesting, although the Moto E5 has a more understated look to its G6 brothers. A striking round camera module is the centrepiece, while below sits the ‘M’ batwing logo which isn’t even just for show.

Despite the low price of the E5, the logo is where the phone’s fingerprint scanner resides.

It’s impressive that the E5 has an aluminium rear cover, not just plastic as you would expect and we like the soft matt finish here. The phone looks stylish and feels nice in the hand, too. 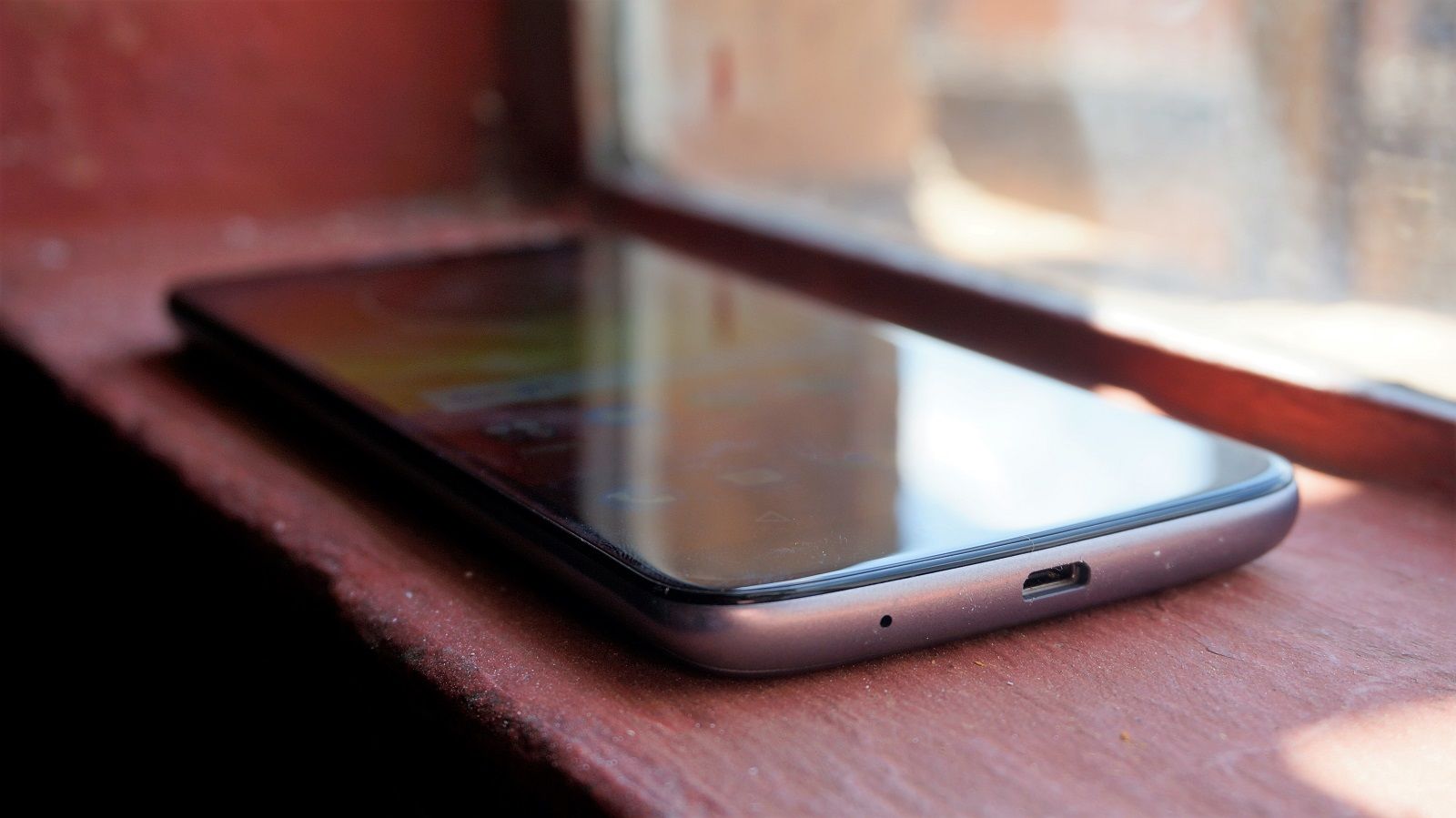 At 9mm and 175g, the Moto E5 isn’t much thicker and heavier when compared to the regular Moto G6 which is almost twice the price. There’s no p2i water repellent coating here, though and you don’t get USB-C either so there are downgrades.

It might look like the Moto E5 doesn’t have a headphone jack, but it’s merely at the top of the phone rather than next to the Micro-USB port.

The Moto E5 is available in the pictured Flash Grey colour or Fine Gold.

Despite being such a cheap phone, the E5 has an impressive range of specs and features. A phone like this only a few years ago would cost around three times as much, if not more.

One of the things Motorola is making a big deal of with the G6 range is the new 18:9 Max Vision screen, following the trend across the phone market of taller displays, or widescreen if you’re holding it in landscape.

It would be perhaps understandable if this didn’t trickle down to the E range just yet but it has. So like the Moto G6 Play, the Moto E5 has a 5.7in screen with an 18:9 aspect ratio.

Impressively, it’s also IPS LCD and has the same HD+ resolution (720×1440) so that’s the same screen for £50 less. Incredible value from Motorola.

The display is crisp, colourful and has an impressive amount of brightness when needed. 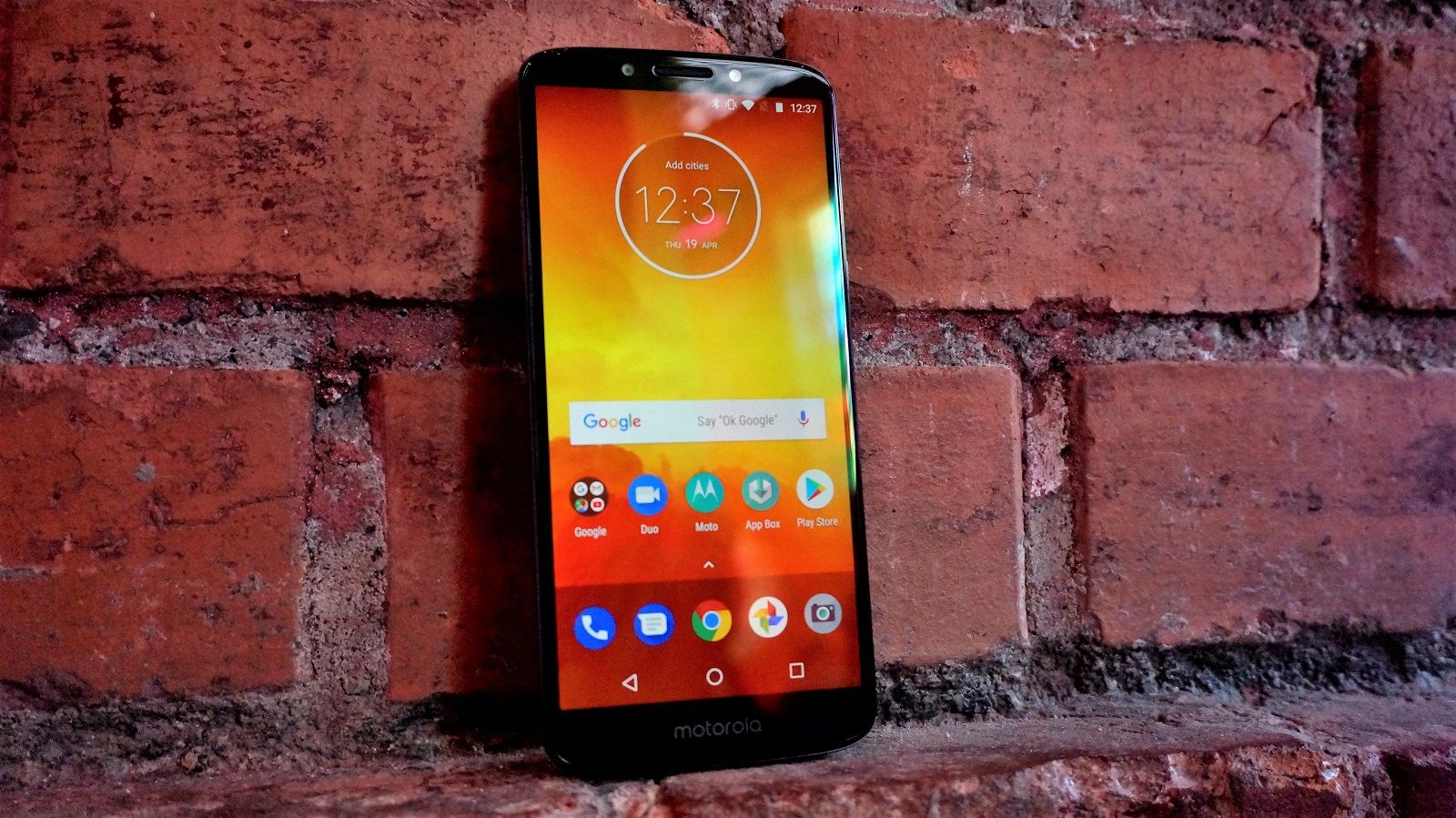 There are other areas which are downgraded, though, so you get a Qualcomm Snapdragon 425 processor, 2GB of RAM and 16GB of storage. That not much space, especially as Android takes up a decent chunk of it, but there’s a microSD card slot so you can add up to 128GB more – almost a necessity here.

The specs are what we’d expect for the price point and the Moto E5 performs very well in day-to-day use. You have to accept that things like the camera won’t open instantly.

You can see our benchmarks below compared to the other Moto phones and the excellent Honor 9 Lite (which is £199). Note that Manhattan 3.1 and Car Chase are not available on the E5.

It’s not too much of a surprise that this is a basic area for a phone like the Moto E5, but anyone buying at the price is unlikely to notice or care.

However, it’s impressive to see the fingerprint scanner and NFC. A headphone jack and a single speaker are bare minimum in terms of audio, although many more expensive phones don’t have the former. 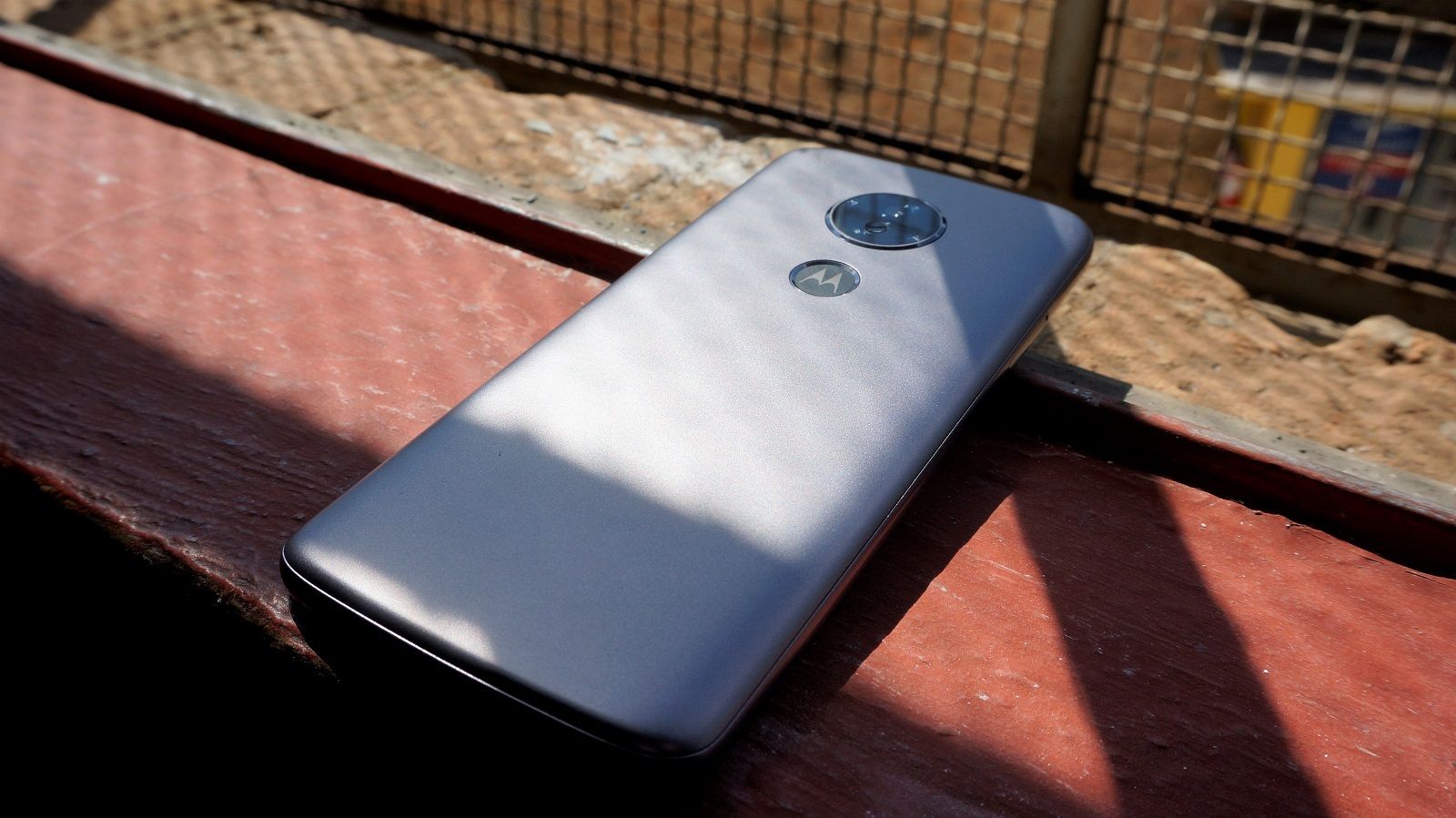 Not only does the Moto E5 share the same display as the G6 Play, it has the same 13Mp rear camera which benefits from an f/2.0 aperture, phase detection autofocus and HDR.

That’s pretty much unheard of for a phone just over £100.

We like the camera app and the results overall, perhaps aside from video, are much better than you would expect. In good conditions, the E5 can take detailed and vibrant results that you’ll be more than happy to show friends and family.

The phone doesn’t have all the features found on the G6 like spot colour, but does have panorama and slow motion. The price is reflected more in the front camera which is 5Mp with an f/2.2 aperture. Still, it can take some decent selfies good enough to share online.

Check out our sample photo gallery below. 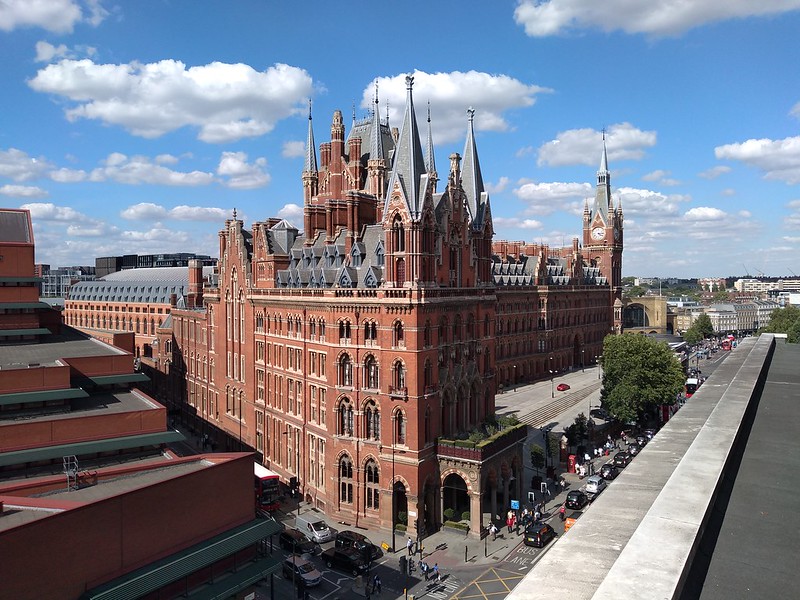 We all want better battery life and with a 4000mAh battery, the Moto E5 could give you a nice boost to your current situation with most phones offering around 3000mAh or less.

It’s worth noting that if the battery is a key spec for you the Moto E5 Plus goes up to a huge 5000mAh.

In our Geekbench 4 battery test, the Moto E5 lasted nine hours and seven minutes which is well above average. This means some users could see it lasting two days – a rarity.

The E5 doesn’t have Turbo Charging like the G6 range, but it does have a 10W rapid charger at least. 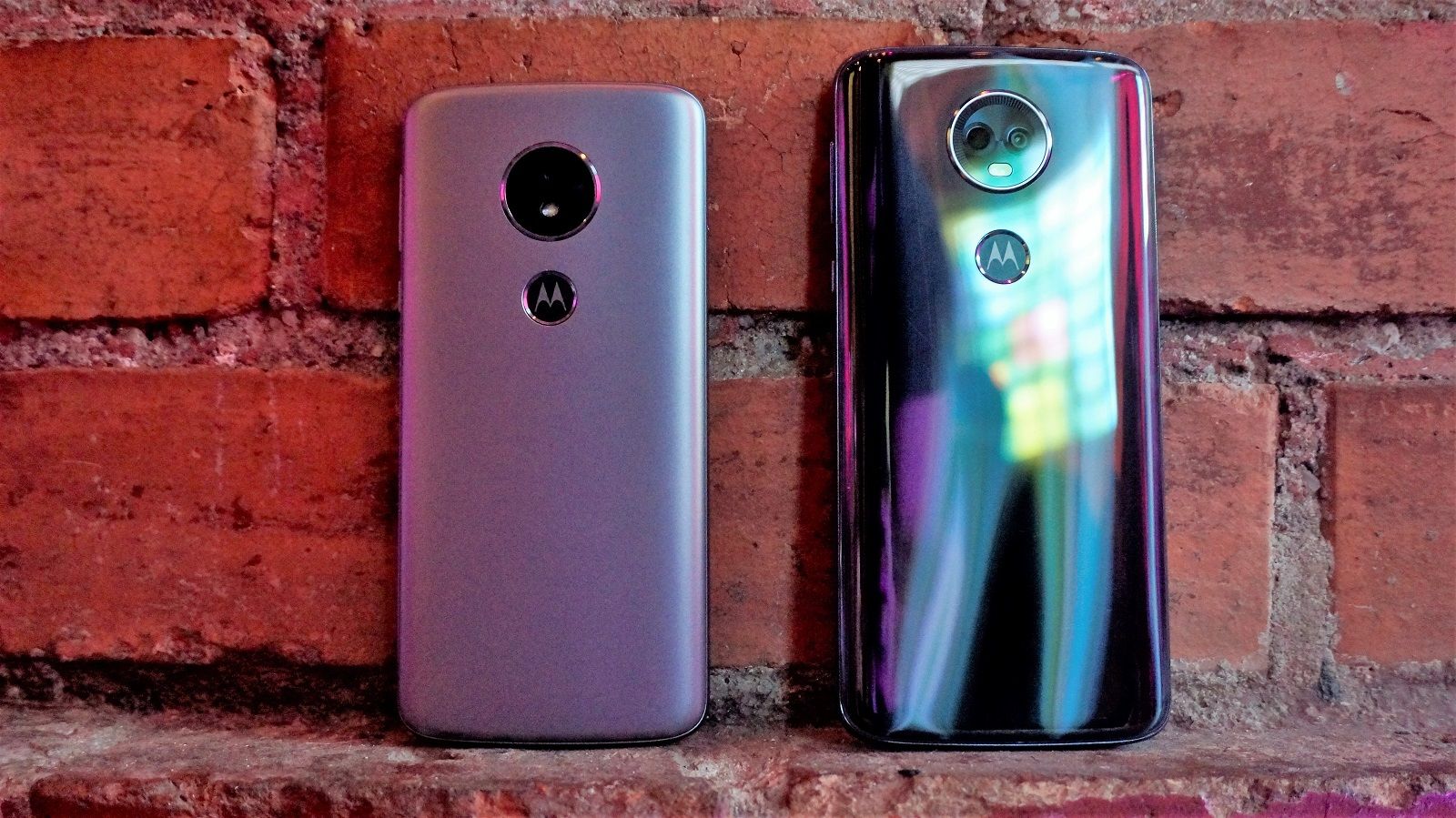 That means things are kept plain and simple, without lots of additional apps and features taking up space. It’s essentially the same interface you get with Google’s own Pixel 2 phones, although you will find LinkedIn and Outlook pre-installed which is a shame.

Motorola adds its own Moto Experiences app which adds genuinely useful things like gestures and display settings. You don’t get the new Moto Voice feature available on the Moto G6 phones though.

For a phone priced at just over £100, we’re astonished at what Motorola is able to offer.

The Moto E5 has exceptional design and build quality making it feel like a much more expensive handset. And that’s just for starters. You get a great screen, decent battery life, a good camera and even a fingerprint scanner to boot.

Just note that storage is limited and there are other compromises compared to the G range like Micro-USB, no water repellent coating and some software like Moto Voice. This is all understandable at the price, though.