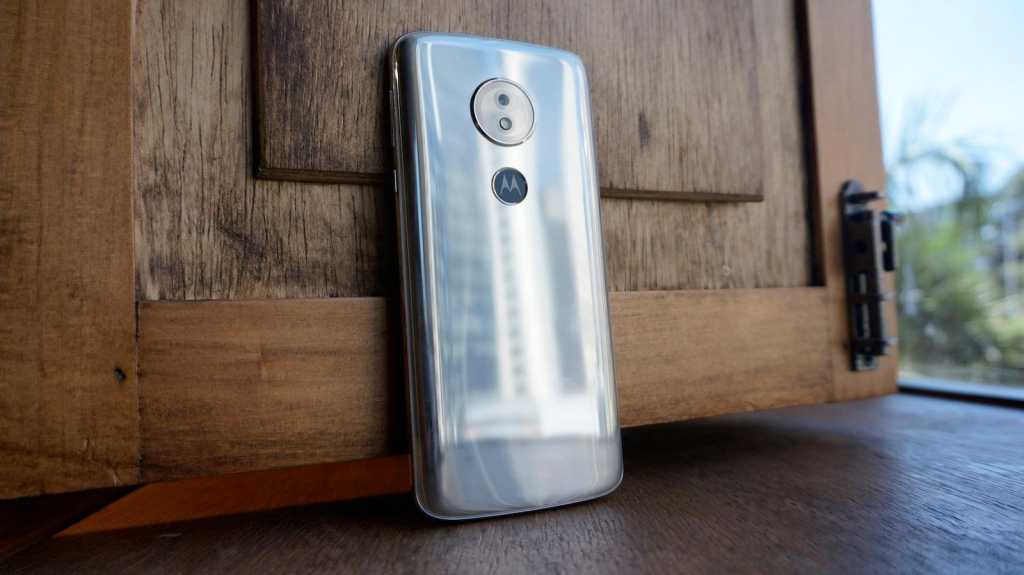 The Moto G6 Play is a great little surprise of a phone. It holds its own next to the other two G6 phones and has better battery life (and a cooler fingerprint sensor). The 18:9 display and premium (but plastic) design means it feels just as well-made as phones double the price but doesn’t compromise on performance to do so.  With a headphone jack as a plus, a minus is micro-USB but we’ll forgive that on its strengths and can recommend the G6 Play as one of the best budget phones of 2018.

The Moto G6 Play is a sleek budget phone that costs just £169. It is an outstanding cheap phone in 2018 that in no way feels like one despite costing less than the Moto G6 and G6 Plus.

While those two phones have better specs, the G6 Play has charmed us right out the box. It is well designed, sleek yet sturdy and a decent performer considering the low-end spec sheet.

Here’s our review explaining why the Moto G6 Play is such a good deal.

You can get it in the UK  from Carphone Warehouse and Amazon.

If budget is your primary concern, note that Motorola also announced the cheaper still Moto E5 (£119) and Moto E5 Plus (£149) at the G6 launch event, and there’s not a huge difference between the G6 Play and E5 Plus. The E5 Plus has a larger screen and higher-capacity battery, too.

We’ve explained the differences between Moto G6, G6 Plus and G6 Play here.

While the G6 ( reviewed) and G6 Plus ( reviewed) look pretty much identical, the Moto G6 Play has a slightly different design. You can tell it’s part of the same range of phones, but the Play has a few quirks that make it stand out.

For starters, the fingerprint scanner is on the back and has the Motorola logo on it. You might prefer the placement compared to the front-mounted G6 and G6 Plus, but that’s entirely down to personal preference.

It’s cool that there’s the famous Motorola ‘M’ logo in the actual button itself too.

At first glance you’d think Motorola had removed its headphone jack, but actually it’s moved it from its position next to the USB port on the G6 and G6 Play to the top of the device.

Another change here: that port is Micro-USB rather than USB-C, which is a shame considering its an older standard, but understandable considering the price.

While the more expensive G6 models have a sleek 3D glass rear cover, the G6 Play is plastic. It still looks and feels good though, and actually the plastic cover helps in terms of grip.

The other thing missing here is a p2i water-repellent coating (in the UK at least), so you’ll have to be a little more careful with it around water, but we used it in the rain and it came out unscathed.

The G6 Play is a bit chunkier than most phones at 9mm and weighs a reasonable 175g. These aren’t huge differences to the other G6 phones, though and the bulk and weight actually help to make it feel more premium – but if you want a slim, sleek phone this is not it.

Our blue review unit is an attractive hue though somewhat a fingerprint magnet. But the way it reflects light is very cool for a budget phone and helps it to stand out, along with its circular camera module.

The display is a 5.7in 18:9 LCD, but not a Full HD resolution at 1440x720p. We still really liked using the phone, and the lower resolution of the display in comparison to the G6 and G6 Plus isn’t an issue in our eyes.

It can deal with colour reproduction well in standard mode, but has the option to change to vibrant to boost the saturation. The display is more than sufficient at this price, and this is one of the cheapest 18:9 phones we’ve seen, and Netflix on the bus was no trouble at all.

It’s impressive to see the G6 Play has 3GB of RAM and 32GB of storage, which matches the entry configuration of the regular G6. However, the processor drops from a Qualcomm Snapdragon 450 to a 430.

The lower-grade chip means performance isn’t as good, and in a tangible way, but we found the phone perfectly serviceable as our main phone for several days. Multi-tasking is a tad slow at times and the camera app lags, but for calls, texts, social media, email and even Spotify to Bluetooth headphones, the G6 Play is surprisingly excellent.

As the below benchmarks shows, the G6 Play holds its own against phones of the same price and specs. It performs faster in frames per second tests than the G6 due to its lower resolution screen – but in fact, you won’t notice any difference in use between any of these four phones.

As is standard on lower-end phones, there is Bluetooth 4.2 for connecting to accessories such as speakers, but with the absence of the aptX standard, audio quality to wireless headphones is noticeably patchy.

If you want to use the speaker, it’s a front port deal and gets quite loud, but is only suited to talk radio or podcast playback – and a quiet solo Netflix session at a push.

Motorola has given the G6 Play a 13Mp camera, but there’s no secondary lens. There’s phase detection autofocus and an f/2.0 aperture, and the results are just about social media-acceptable, but it is obviously not a standout shooter.

You can cycle through the photo samples below. Note how it can capture the sky well in some shots, but it becomes blown out in others. The level of detail captured for a budget phone is pretty decent, though.

Video is limited to 1080p at 30fps, though the phone can still record slow-motion. The front camera is 8Mp like the other G6 models but, again, has fewer features here and is passable at best.

Although most areas are downgrades, the Play offers a much higher-capacity battery than both the other G6 phones. It’s a whopping 4000mAh, compared to the 3000- and 3200mAh G6 and G6 Plus.

Motorola says this means you can get no less than 32 hours usage from the device, which sounds amazing – and more importantly we found to be true in real world use. The G6 Play lasted for over two days of use before hitting anywhere near 10% battery, which is awesome on a modern (if low-end) smartphone.

It also benefits from Turbo Charging: you can get six hours of life from a 15-minute charge and in our tests, it charged from 0% to 33% in half an hour.

Overall the experience on the G6 Play is solid thanks to Moti’s uncluttered Android skin that barely changes anything from stock. Notably, there are fewer camera features on the phone compared to the G6 and G6 Plus thanks to the lack of dual rear cameras.

You still get Android 8.0 Oreo with a stock interface – it’s very much the experience you get on Google’s own Pixel devices bar a few aesthetic changes.

That means Android as it’s intended, with no bloatware to take up valuable storage, important when you only have 32GB (although it is expandable).

Motorola does add its own Moto app, which contains helpful things such as actions and things you can do with the display. The G6 Play doesn’t have Moto Voice, though.