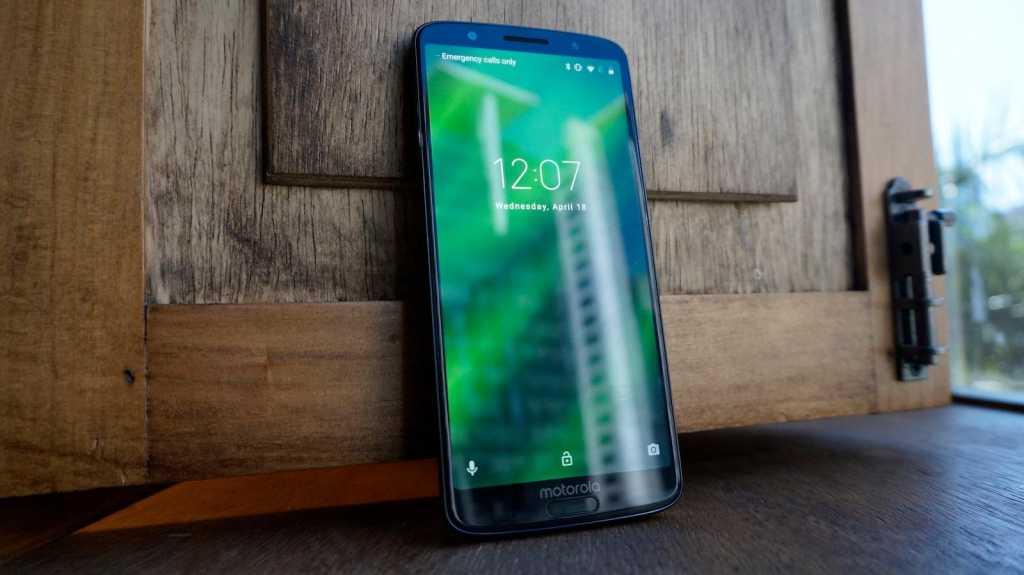 It’s not perfect by any means – we noticed occasional sluggish performance in some apps, while the camera was a touch slow in opening and struggled to deal with shake – but there’s a huge amount here to like. The design is smart and lightweight; the screen is big and sharp; battery life is solid and fast charging impressive; you get twin camera lenses and a decent portrait mode, along with a bunch of gimmicky camera modes that are less reliable but lots of fun. All for this £269! It’s a fantastic deal, and a great phone for the money.

The Moto G range has only been around for five years but it’s come a long way in that time: not all are budget phones any more, but they’re a lot cheaper than many mid-range devices from the likes of Honor, and we’ve been consistently impressed by what they have to offer.

In this article we review the biggest of the latest batch of G handsets – the 5.9in G6 Plus. It costs only £269/299€ but features a large 18:9 display, twin rear-facing cameras, face and fingerprint unlocking and fast charging.

For further information you can also read our reviews of the Moto G6 and Moto G6 Play, and learn about the differences between the models.

It’s the most expensive G6 model – there’s also the £219 regular G6 and £169 G6 Play – but that’s still an appealingly affordable price tag, undercutting rivals like the impressive Honor 9 even at its dramatically reduced price of £299.

The Plus is exclusively available through Carphone Warehouse in the UK; you can browse contracts in our roundup of the best Moto G6 Plus deals. US buyers will find it on Amazon for $419.

In general you should also remember to factor in the price of a case to keep your phone looking nice and new, but our G6 Plus came with a simple clear protective cover. Check if one is included in your bundle before spending extra.

The G6 Plus is marginally bigger than the G6, but the design is otherwise almost identical. It’s pretty hard to tell which is which unless you put them side by side.

It’s slim, smooth and glossy, with an attractive curve across the back; the rear glass looks and feels nice, although it’s a little slippery and prone to finger marks. We also like the ridged texture on the power button, which helps you locate it blind, although this effect is lost with cases that cover the buttons.

Despite the size and 18:9 aspect ratio of the display, Motorola has found space to squeeze in a fingerprint scanner at the bottom of the device (unlike on the G6 Play, which has it on the back). This is so low down, in fact, that we found bending a thumb over to activate it a little uncomfortable. But many of you will use a finger on the opposite hand instead of the thumb on the holding hand, and remember too that the fingerprint scanner is only one of many unlocking options, including face and voice recognition, Smart Unlock and passcodes.

Finally, we were struck by how light the G6 Plus felt for so large-screened a device. It’s 167g, which is officially the same weight as the G6 and considerably lighter than the iPhone 8 Plus (202g), which has a smaller screen.

The G6 Plus is described as having a “water-repellent nano-coating” by P2i. Basically it’s splashproof rather than fully dunkable, so try to keep it away from swimming pools.

The Plus is available in Deep Indigo (which is pretty much black) and Nimbus (blue), although you may not get the choice: Carphone Warehouse, for instance, has it in blue only.

Normally a Plus model would largely (pun unintended) be about offering a significantly bigger screen. But in this case the display is only slightly bigger than that of the regular G6, and there are instead some important differences between the models under the hood.

We found the G6 Plus display sharp, vibrant and colourful, although bear in mind that it’s an LCD. A few high-end phones out there use OLED screens, which give deeper blacks and better overall colour reproduction, and if you’re used to one of them this will pale in comparison.

Our real-world reading for a white screen at the top brightness setting was 543 nits – an impressive rating, and a little higher than the similarly priced Honor 9, although as ever you could spend more to get more. (The iPhone X is rated at a ‘typical’ maximum of 625 nits, and plenty of Samsung phones have exceeded 1,000.)

One last thing worth mentioning about the screen: there’s a feature called Attentive Display which keeps it lit up as long as you’re looking at it. This is a painful and in our opinion rather picky feature to use, but may prove useful in certain contexts.

The Plus comes with a Qualcomm Snapdragon 630 processor rather than a 450 like the regular G6. The higher-tier chip is specced at 2.2GHz octa-core and will cope better with day-to-day tasks; indeed, in some side-by-side tests with the G6 and G6 Plus, the Snapdragon 630 was noticeably faster at opening apps and loading videos.

Nevertheless – and bear in mind here both the low price tag and the fact that your reviewer is accustomed to a recent-generation iPhone – we found the Plus a little sluggish at times. It appeared prone to hanging on certain apps, including Slack and Cricinfo, and the slight delay in getting the camera app to open meant we missed some shots that would normally be gettable.

It did okay but not spectacularly in our usual array of speed test benchmarks – again, this is to be expected from an Android phone at this price.

You get a headphone jack – good news for owners of costly legacy headphones. This is on the bottom edge, to the right of the USB-C port.

In our testing we found call audio quality a little crackly, both when speaking normally and over speaker.

In a nutshell: the G6 Plus has an exceptional photographic feature set for the money, but the slowness of the camera app (in comparison to costlier phones – it’s actually a shade sharper than the G6) was an issue some of the time.

You get twin lenses (12Mp/5Mp) on the rear and a portrait mode. We’re big fans of the bokeh effect in general and got some nice shots with this, although subjectively it feels less dramatic (in the degree of blur applied to the background) than some others we’ve tried. And while all portrait modes are designed and most effective for static shots, this seemed even more blur-prone than others. Keep your subjects still, folks.

Shots in good outdoor lighting captured good detail and colour reproduction was strong, although again the slowness of the camera caused slight issues. Taking our standard shot of St Pancras in windy conditions, what felt like very minor camera shake caused some blurring, and this continued until we braced against a horizontal railing.

Low-light shots were reasonable for a phone at this price, but zooming in reveals more noise and muddiness than you’d get with a more expensive setup: the highlights are a bit smeared.

The G6 Plus can take 4K video, as opposed to the 1080p on the G6. More intriguing for the youngsters and hipsters will be the range of face filters you can apply to this in real time: the camera detects the face and puts rabbit ears, a unicorn horn, cat whiskers or whatever on the victim/subject as appropriate, together with background effects and voice distortion in some cases. The reviewer’s kids became obsessed with this feature, which can be used on still images as well as videos albeit to lesser effect, but we were a little disappointed to find that it can’t be used on the selfie camera.

And the feature set doesn’t stop there.

Motorola offers a text scanner, which we found mostly accurate (although it was completely flummoxed by comic-style typefaces); a Spot Colour mode, where you tap on a colour in the frame and all other colours are faded back (which may work well in certain situations – shooting flowers and so on – but just looked peculiar whenever we tried it); and a cutout mode that is pretty rough and ready but lets you add in your own background extremely easily.

These less commonplace features mostly produced fairly unpolished results for us, and you shouldn’t expect miracles. But they’re a lot of fun, and (we suspect) excellent for creating quick social-media posts.

The 6G Plus has a good-size 3200mAh battery that lasted 7 hours 42 minutes (and scored 3625) in the demanding Geekbench 4 test; both results are about average, but you can expect better than that in real-world use.

The phone also offers fast charging. In our standard test, charging for 30 minutes from 0%, it made it all the way up to 49%, an excellent effort (and the same as the regular G6, which has a smaller battery). There are quicker chargers out there, mind you: the Honor 10 managed an astonishing 65% in that time.

The software is no different on the Plus model from the regular so you still get Android 8.0 Oreo and a very stock version of the operating system, too.

There’s no bloatware here as per usual. Motorola does add some handy software experiences, though. They’re all neatly contained in the Moto app where you’ll find gestures (Moto Actions), handy screen features (Moto Display) as well as some new things such as Moto Voice (which introduces always-on voice commands) and Moto Key (which manages passwords for apps, websites and Windows via the fingerprint scanner).

We mostly relied on the facial unlocking, which is (understandably) less reliable than something like Face ID but still performed well. It’s reasonably fast and was able to work out who we were in lowish light and when wearing large sunglasses. But covering a single facial feature entirely – putting a hand over one eye, the mouth etc – stopped it working, so high scarves are not going to work well.

There are alternatives. Aside from the fingerprint scanner (which was also quick and reliable), Smart Lock is a neat package of options: our favourite is setting trusted locations in which the device will unlock automatically, although you should bear in mind the security implications of using this. You can do something similar with trusted devices being within Bluetooth range.