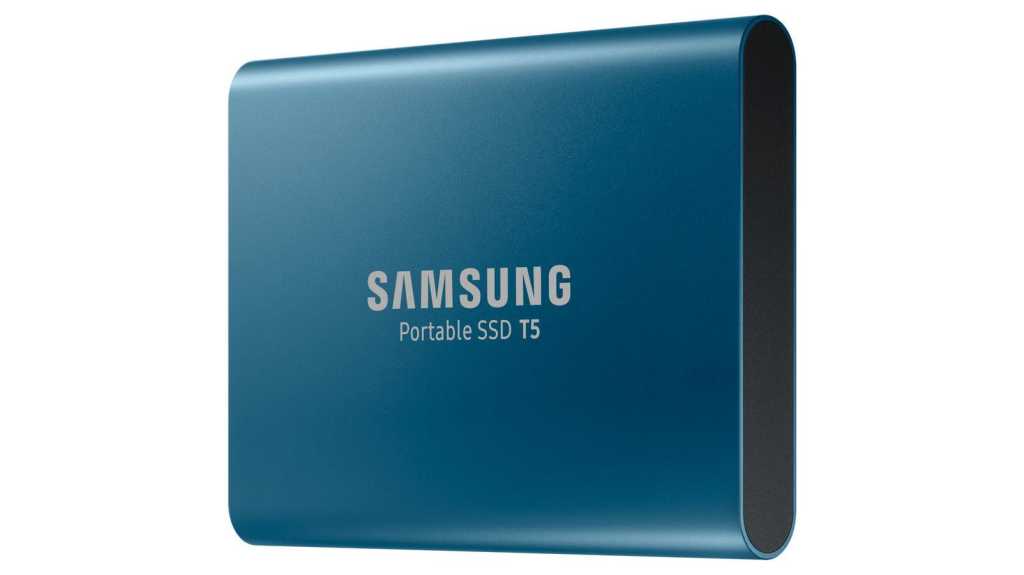 The T5 isn’t cheap, but it delivers on the critical performance that a portable SSDs are bought to ensure. Using one with a laptop that has a hard drive is largely pointless, as the full speed advantages can only be achieved if used in combination with an internal SSD.

Having mobile storage that operates at high speed is crucial for anyone with a train, plane or whatever transport to catch, and preferably not miss.

The arrival of USB 3.0 technology has allowed for external devices to operate at similar speeds to internally connected storage, and to achieve that performance both internal and external drives must use solid-state technology.

SSDs are quicker than conventional hard drives, less susceptible to shock damage, use less power  and they’re not limited by the physical constraints of drive shapes and sizes.
If that’s a recipe for the perfect mobile SSD, then the Samsung T5 must be the proof of this pudding.

It’s also available in the US on Amazon.

In the T5 range are also a smaller 250GB drive and two larger, 1TB and 2TB options. The most expensive per GB is the 250GB model, and the best value is the 1TB drive at around 30p per GB.

Comparable portable SSDs are made by numerous companies including SanDisk, Western Digital and ADATA to mention but a few.

And, we should say that you can take any 2.5” SATA SSD and place it in a suitable USB 3.0 enclosure, and create a portable drive specifically for your needs.

There is an elegance to the T5 design that is impossible to ignore.

Accompanying the drive in the packaging is two short (45 cm) but high-quality cables that are designed to connect the T5 to a PC, Mac or Android device. The device is USB Type C, and the cables allow you either to connect it to a Type C or a conventional Type A USB 3.1 Gen 2 port.

A touch that we liked about the cables was that each has a small Velcro strap on them, allowing them to be made as tidy as possible when not connected to the T5.

The only trick Samsung missed was that there is no pouch or carry case included for the T5 and its accessories once you remove it from the packaging.

By default, the T5 contains just some software to use the encryption capability of the drive on the PC and Mac and a text note to tell you where to find the Android application on Google’s Play Store to do the same.

Internally Samsung made some interesting choices over previous portable SSD designs, selecting to use the ASMedia mSATA-to-USB bridge controller and not a home-grown technology.

The flash memory is Samsung 64-layer 3D V-NAND Triple Level Cell that first appeared in the 850 SSD series, and it contains all the features of that product including the TRIM functionality.

Beyond these points there isn’t much else to say, other than the 500GB drive had 465GB of usable space, and it comes with a three-year warranty.

The speed that you might expect from the T5 is very dependent on the PC it is connected. Because irrespective of the T5’s capabilities, if the connected computer is using a conventional hard drive, then that will be the limiting factor in any file transfer.

On a well-specified PC with a full USB 3.1 Gen 2 port, the T5 positively purrs.

Samsung quotes a top speed of 540 MB/s, and we didn’t get that high, possibly because the test system doesn’t use an M.2 NVMe drive. But we did better than 440MB/s in both reading and writing. A performance level that makes the majority of most external storage devices look glacial in comparison.

The drive comes pre-formatted in exFAT, though you could easily change that to NTFS or ext4 if that is required.

By using the Samsung Portable SSD Software, it is possible to encrypt the drive using 256-bit AES. Subsequently, this forces a password to be input to access the contents. But be warned! Forget the password and however important the contents will be beyond reach forever.

With no moving parts, that it is rated to withstand being dropped onto a hard surface from 2m isn’t much of a surprise. Most external SSD drives die because the USB port or cable becomes damaged, and looking after that should maximise the lifespan of the T5.