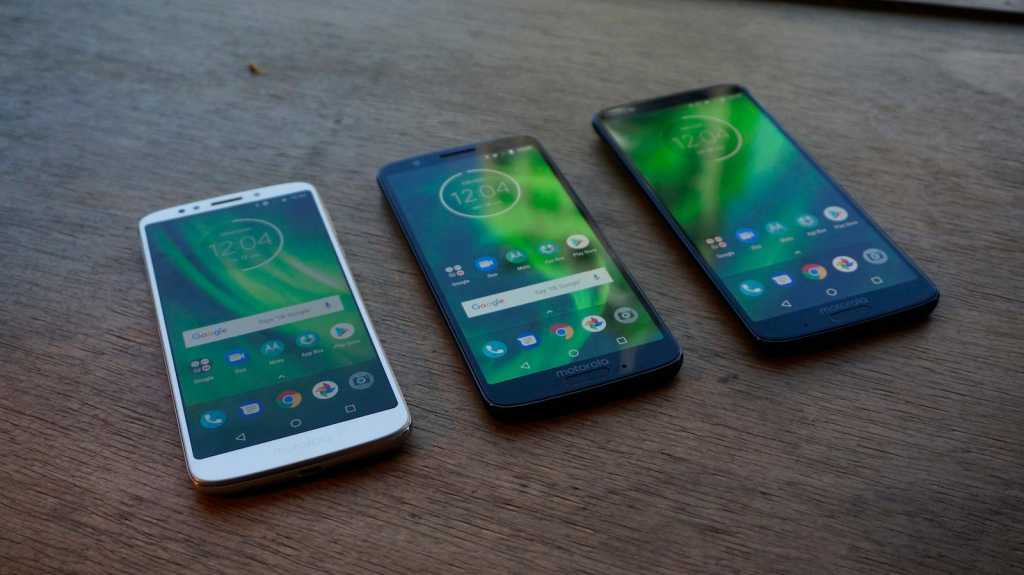 If photography is your thing you’ll likely opt for the Moto G6, but in other respects it’s not *that* much better than the standard Moto G6 to justify spending an extra £50. If you want to go down in price rather than up, the Play model sees you making some sacrifices on performance, but you’ll benefit from longer battery life. The Play is a very decent budget option if your needs aren’t great and you just need a phone that keeps going as long as you do.

The Moto G family of budget- to mid-range smartphones received an update during a Brazilian launch event in April 2018. New to the line-up are the Moto G6, Moto G6 Plus and Moto G6 Play, but what exactly are the differences between them? We’ve outlined key areas in which these new phones differ, as well as what’s the same.

The Moto G6 is the standard model in the line-up, while the Moto G6 Play is a £50 cheaper version with lower specifications but a higher-capacity battery that will last up to 36 hours. Top of the line is the Moto G6 Plus, costing an extra £50 over the G6 but in return offering a slightly larger 5.9in screen, a faster processor and graphics, improved connectivity and a Dual AutoFocus Pixel camera, plus the option of more memory and storage.

When looking at the three phones side by side it’s clear that all come from the same family, with each adorning an 18:9 panel that has until now largely been the reserve of phones with much higher price tags. There are subtle differences between these screens in both size and resolution, however.

While both G6 and G6 Plus support a Full-HD+ resolution, the Play has an HD+ panel. It’s the same size as the 5.7in panel on the Moto G6, but you will notice a difference in clarity. The Moto G6 actually has the highest pixel density of the lot, bearing in mind that the Plus has a fractionally larger screen at 5.9in.

We’ve rounded up some of the best Moto G6 cases for keeping that display pristine.

If photography is your thing you’ll want the Moto G6 Plus. Although it looks to be similarly specified to that of the standard G6 on paper, a 12Mp + 5Mp dual-lens setup, this is a Dual AutoFocus Pixel camera with a lower f/1.7 aperture (vs f/1.8), able to shoot 4K video. The G6 maxes out at 1080p video at 60fps.

The Moto G6 Play has a single 13Mp camera with an f/2.0 aperture and support for PDAF.

A key reason to buy the Moto G6 Play over the G6 and G6 Plus is not just its price but its battery. While those models feature 3000- and 3200mAh batteries respectively, the Play has a huge 4000mAh battery that Motorola claims can last up to 36 hours on a single charge.

All three support TurboPower fast charging, but the Play model swaps out the USB-C charging port of its brothers for the now old-hat Micro-USB.

Given that larger battery it’s no surprise that the Play is the largest and heaviest of this group, 9mm thick and 175g in weight. Both G6 and G6 Plus 167g, though the G6 Plus is slightly slimmer at 8mm against the G6’s 8.3mm.

There are also some differences in Bluetooth support, with the Plus offering Bluetooth 5.0 but both G6 and G6 Play stuck on Bluetooth 4.2.

The Moto G6 and Moto G6 Plus support a type of waterproofing called P2i. The Play does too, but only in the US.

P2i sees devices coated with a polymer nano coating, meaning ports can be left open rather than covered over.

All three phones are equipped with a front-facing stereo speaker and a 3.5mm headphone jack. Motorola specifically states the inclusion of Dolby Atmos for the Moto G6, and we’d be surprised if this wasn’t also the case for the Plus.

Whichever Moto G6 model you opt for you’ll get an 8Mp front-facing camera that is also capable of 1080p video at 30fps.

A Moto app contains such things as Moto Voice (voice commands), Moto Display (screen controls, including ability to keep the display switched on while you’re looking at it), and Moto Actions (gestures, such as a double-twist of the wrist to launch the camera). Moto Key is a new addition for managing passwords and logins using the fingerprint scanner.

Every new Moto G6 has a fingerprint sensor, although it is found on the rear of the Plus model below the camera, rather than integrated to a home button below the screen as seen on the Moto G6 and G6 Plus.

MicroSD storage expansion is set at up to 128GB across the board.