Nintendo Labo is a work of genius, taking the Google Cardboard idea to levels we never thought possible. There’s been some grumbling about the price, but you get hours and hours of fun just building the Toy-Cons which is half the point here – it’s no different to buying Lego. We have a minor worry about the strength of some piece, so keep an eye on your kids when they’re playing. Then there are the games, which might not be enjoyable for a long as full-on games, but there is depth to them if you’re prepared to investigate. When you include the customisation elements, Labo is almost limitless. Labo is bags of fun for players of all ages so it’s yet another great reason to get a Switch if you haven’t already.

Nintendo Labo is not a game in the traditional sense. There are games in it, but it’s also a construction kit, an excuse for self-expression, an education tool, and a sandbox for engineering, designing, plus building entirely new creations. All that from a bit of cardboard and a tiny cartridge. Here’s our Nintendo Labo review.

Labo is now on sale and comes in two options. We’re reviewing the Variety Kit here but we have tried the Robot Kit out at a hands-on event.

Update: Nintendo has announced that you can now use the Nintendo Labo motorbike to play Mario Kart 8 Deluxe. Once you have installed the free software update for Mario Kart 8 Deluxe, you can select the Labo Toy-Con as compatible controller from the main menu.

Labo is an ongoing project for Nintendo, but the first two official kits launch in the UK on 27 April, though the US gets them a week earlier on ﻿20 April.

Those are the Variety Kit, which contains a few different small Labo sets, and with the more focused Robot Kit, which lets you dress up in a cardboard robot suit. Both require that you already own a Nintendo Switch – check out our regularly updated guide to the best UK Switch deals if you’re still looking to pick one up.

That might sound like a lot for a bit of cardboard, but remember that not only has this whole thing been meticulously designed, it also includes a host of mini-games and creative tools. Think of it more like a digital Lego set and the price feels a lot more generous.

In addition to the main two kits, Nintendo is also launching a Customisation Set for £8.99/$9.99, which includes stickers, tape, stencils, and more to help you decorate your Labo to your heart’s content.

The early Labo trailers also show off more set-ups than the initial selection, so it’s a safe bet that Nintendo will be releasing other kits in the future. 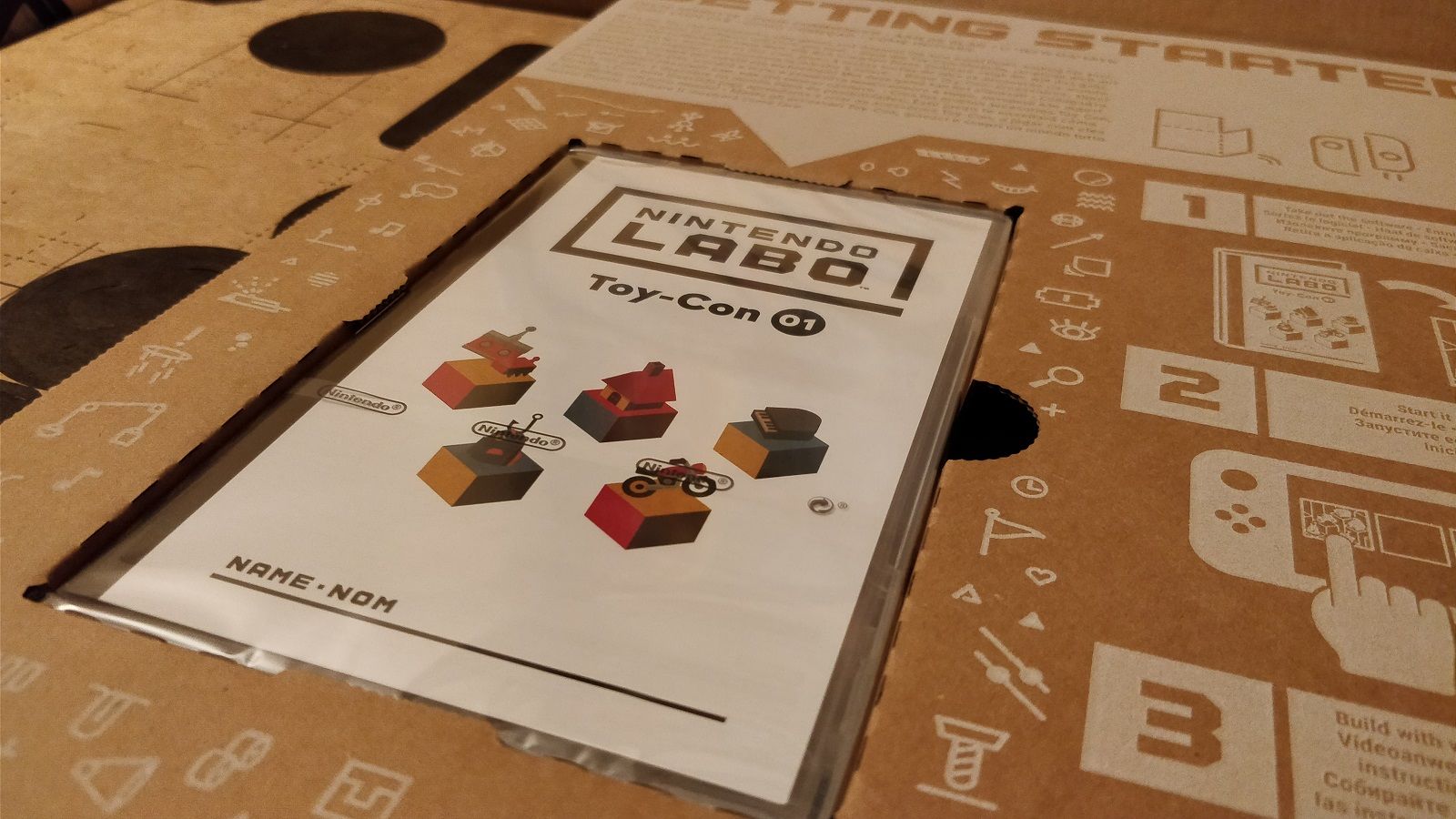 So, what actually is Labo?

Let’s take the Variety Kit first. What you get in the box is the game software itself for your Nintendo Switch, along with a selection of cardboard sheets to create five Toy-Cons: an RC car, a fishing rod, a motorbike handle, a house, and a mini piano.

Each of these then needs to be built before you can use it. The RC car, which is the simplest build, takes around ten minutes to put together the basic car – though realistically, you can spend much longer than that adding on included customisations like an elephant face, or building your own from scratch.

As you build, you work through detailed on-screen instructions that tell you what to do when, with plenty of warnings to save you from making common mistakes – as well as plenty of jovial and sometimes bizarre comments, too. 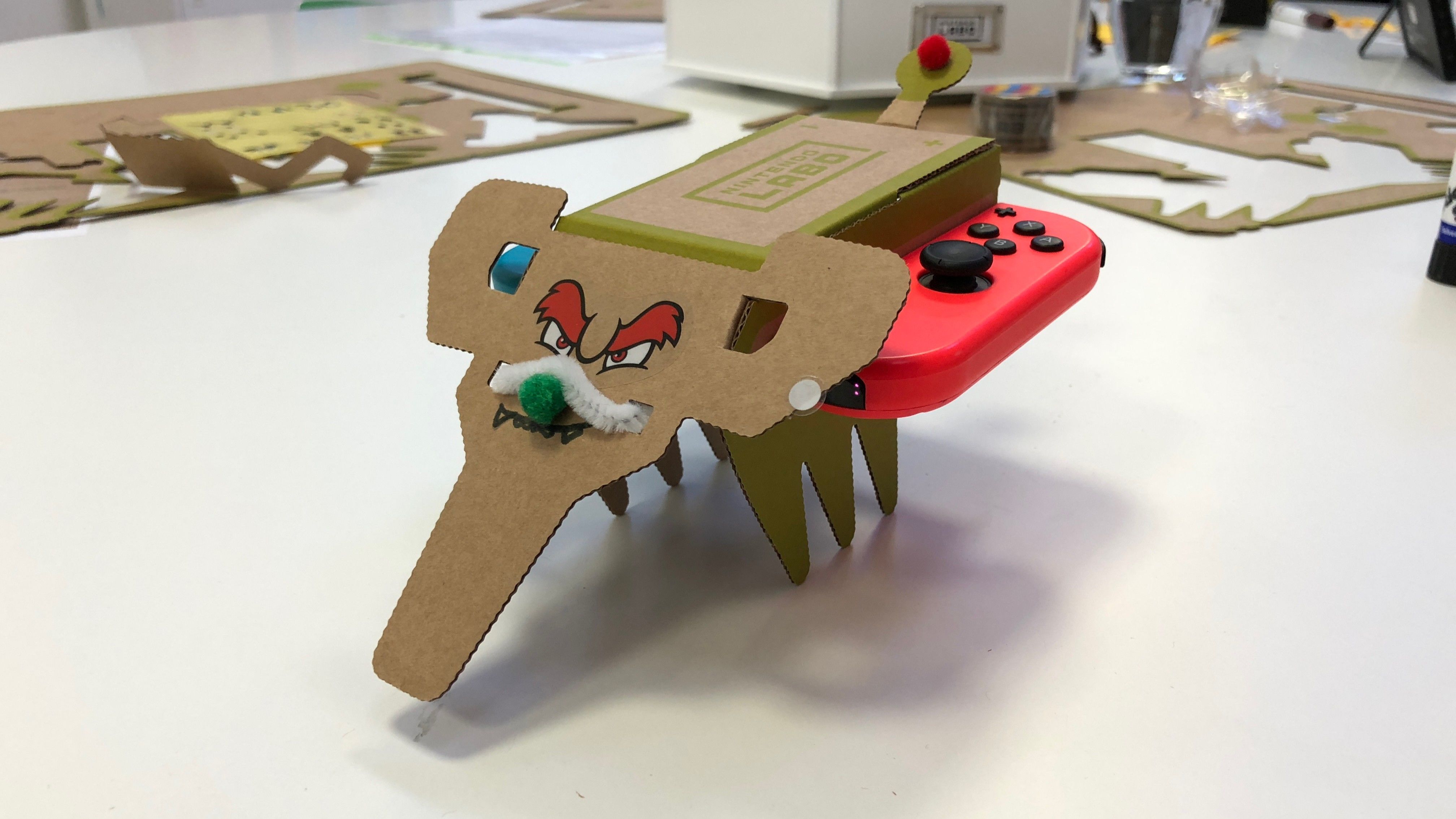 It’s just detailed enough to feel kid-friendly, but not quite so laborious as to frustrate adults who just want to get on with it.

It’s just cardboard but it’s amazing what Nintendo has been able to achieve with some a simple material. Even popping out each piece from the sheet is extremely satisfying, but that’s just the start.

In the case of the car, it’s powered by the vibrations of the two Joy-Con controllers, which slot neatly into the cardboard. Simple on-screen controls let you power them up to drive and steer the car, but there are also more complex options, like fine-tuning the vibration frequency to account for your cardboard tweaks, or seeing through the Joy-Con’s infra-red camera to play games in the dark.

The car is about as simple as Labo gets, and other Toy-Cons are far more complex. Build time estimates go as high as 3-4 hours for the piano, meaning these are serious projects, relying on mounds of cardboard, IR stickers, pulleys, buttons, and more.

It’s truly amazing when you’ve finished each one to see what you’ve built. The creations are elaborate with really clever moving parts. It makes Google’s Cardboard look distinctly primitive. 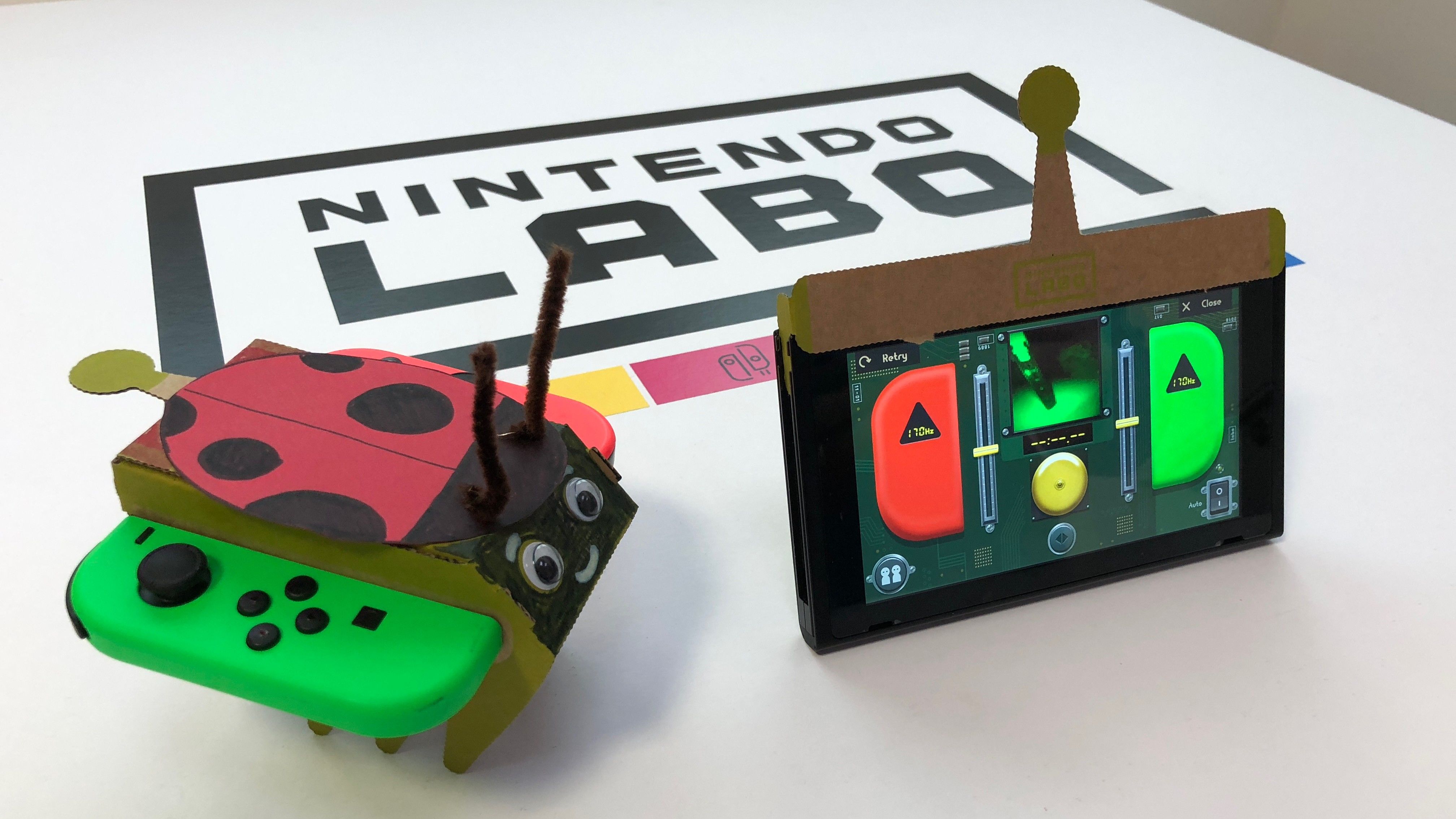 The only issue we see is possible longevity of some, especially if a younger player gets a bit over excited with something like the throttle handlebar of the motorbike when they are perhaps used to much stronger plastic controllers. There’s only the odd spare part and taking the Toy-Cons apart can be quite tricky if a repair is needed.

How long it takes you will depend on various things like confidence and whether you have any help. Technically, Labo is a one-player game, but it’s much more fun with a companion and younger children are likely to need help.

With two people, we found we could build Toy-Cons such as the fishing rod and motorbike in around an hour (30 mins quicker than the lower estimation) – with one building and one controlling the instructions. It can be a little frustrating doing it solo as you have to keep holding down ‘A’ to follow the instructions – it would be nice to set the tutorial going at a slow pace like an autocue.

One thing to note is that once you’ve made the Toy-Cons, they’re not particularly suitable to transport and will also take up a fair amount of space. They’re solid items you can’t take apart or flat pack.

The games themselves seem basic at first – reeling in fish, or racing a motorbike round a few tracks – but they’re very satisfying in themselves due to the way the Toy-Cons interact with the software, and in each case there are hidden depths.

Take the piano, for example – in addition to just pressing the keys, you can bend the pitch, replace the notes with cats miaowing or men grunting, or slot in cards (either those included or your own creations) to create custom frequency waves.

You can even – we kid you not – use the piano to design custom fish for an aquarium. Just don’t ask us why.

So they will keep you going for a while, but we do feel that these games won’t be the kind that you’ll find yourself playing much months down the line. As we’ve said, though, a large amount of the experience and enjoyment is in the building.

The closest to a traditional videogame is perhaps the robot suit, which is sold on its own in a separate kit. This consists of a visor and backpack, with pulleys running down to the feet and hands.

Punch – extending the pulleys – and your robot double punches too. Lift your leg, and he walks. Already, this is one of the most fun game experiences of 2018, without even touching on the extra powers: flying, transforming into a car, stomping, turning giant, shooting eye lasers. All, almost impossibly, controlled merely by moving your body around. 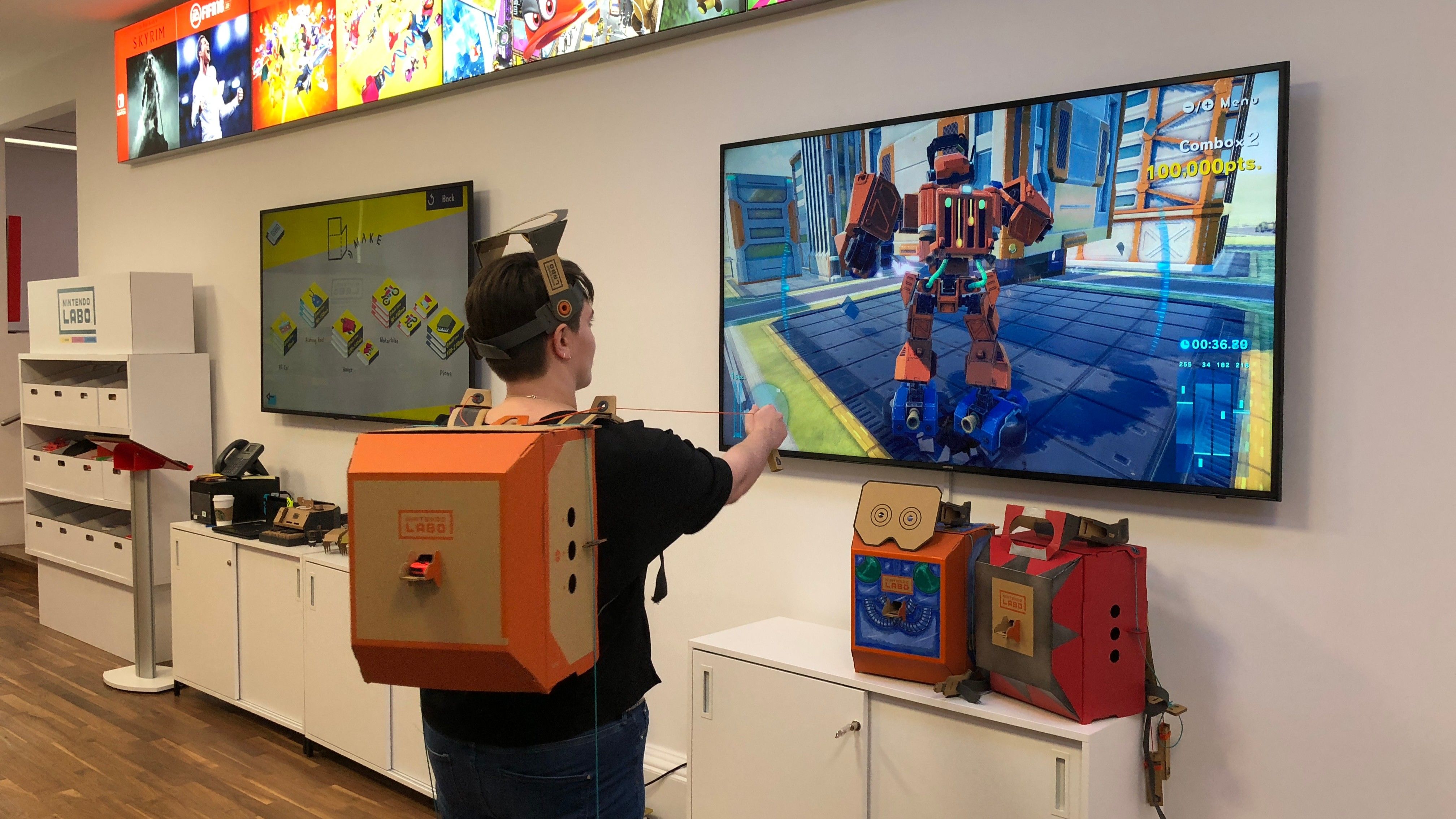 It’s not VR, but the parallels are immediate, and it’s easy to imagine some enterprising users out there finding ways to hook the video output up to a Google Cardboard for the ultimate in budget-friendly virtual reality.

And believe it or not, that’s exactly the kind of behaviour that Nintendo itself is hoping to encourage.

That’s part of Labo’s third strand: Discover. This is a section of the game dedicated to helping you get more out of your kits: there are explanations of the basic mechanics behind each Toy-Con, ideas for alternative ways of using them, and tips on how to reinforce and repair them to protect from over-use.

More interesting though is the Garage mode. This is pretty similar to some of the coding toys that have popped up in the last few years, letting you string together different inputs and outputs to create your own Labo games. 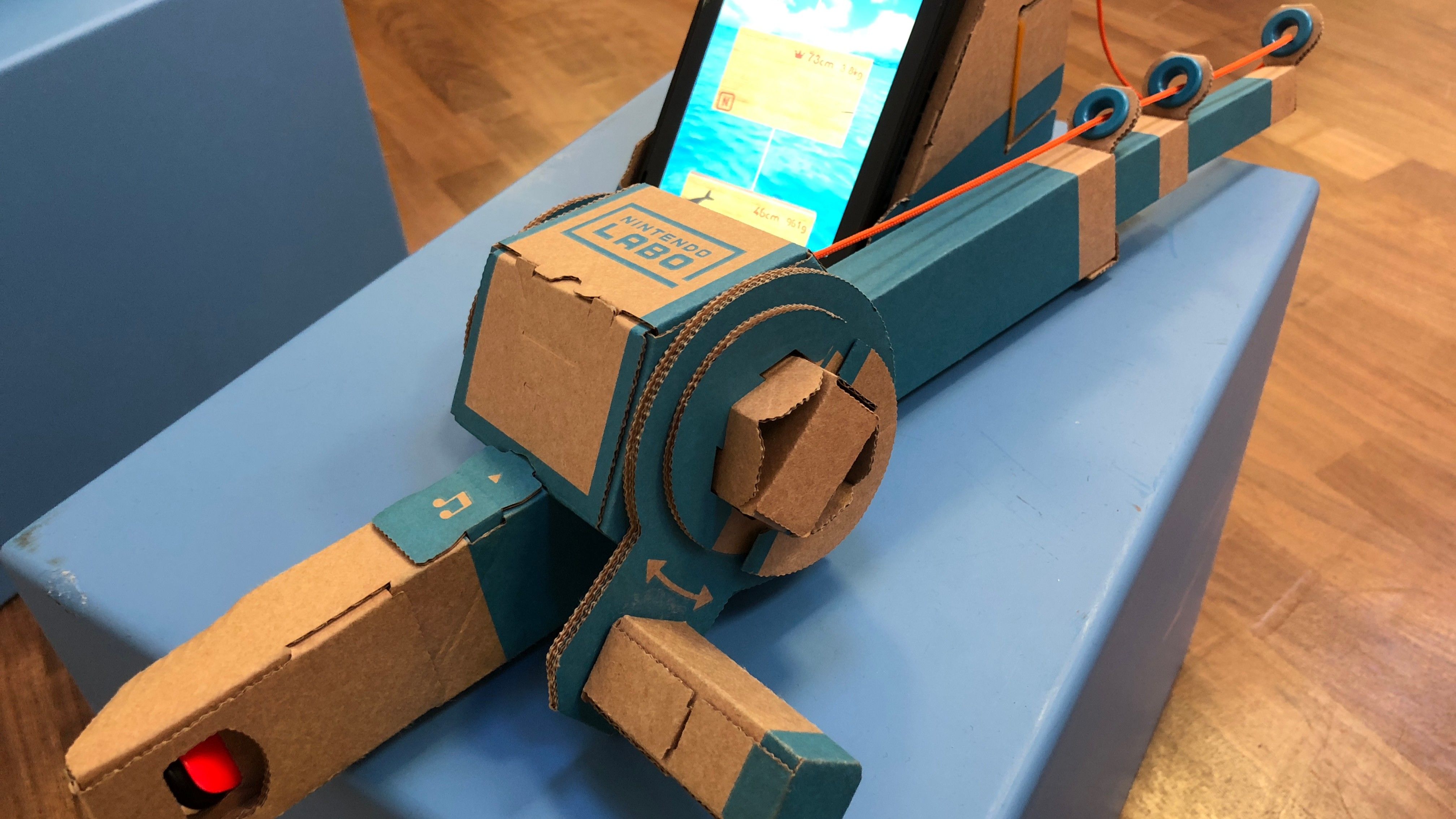 Want to use a fishing rod to drive a car? No problem. Use an IR scanner as a gun in a shooting gallery? Go ahead. You can use Nintendo’s pre-built inputs and outputs – like the aforementioned fishing rod controls – or build something up from scratch from button presses, motion controls, touch input, and more.

The only downside is that at the moment there’s no infrastructure for sharing your creations directly with other players, but Nintendo explained that in a way that’s the point. It fully expects the community to begin sharing instructions online, but it wants players to have to assemble – and modify – those creations themselves as part of the fun, rather than simply download fully formed set-ups.

After many hours of playing around with Labo we feel we’ve only scratched the surface of the full capabilities. Whether you care most about constructing the Toy-Cons, playing with them, or making your own custom creations, there’s a whole lot here to keep you busy.

Any worries about value for money also seem to have been put to bed – with probably close to ten hours of build time alone from the Variety Kit, you could get your money’s worth before you even load up the first mini-game, let alone play every permutation, decorate what you’ve built, or program your own games.