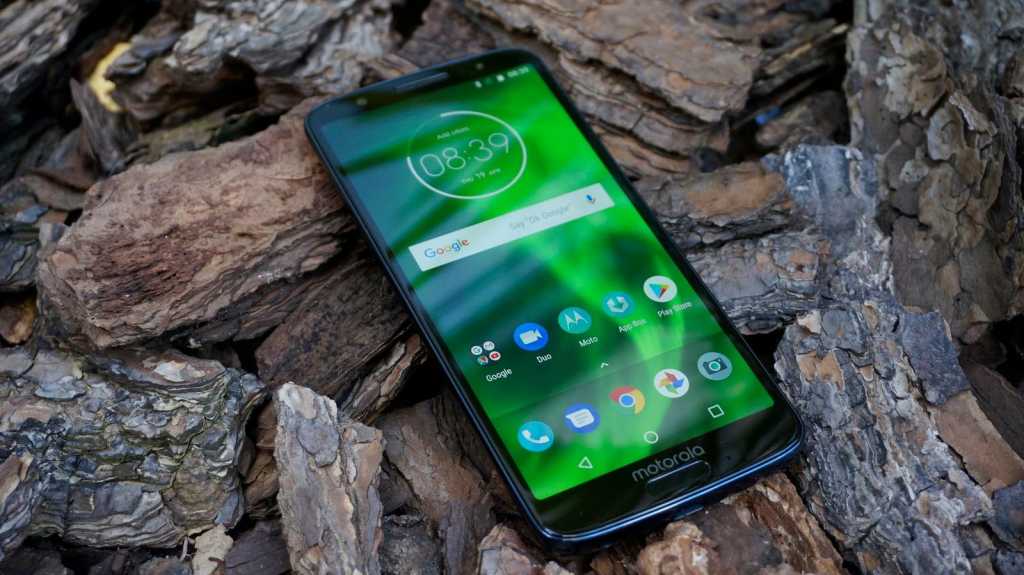 Now less than £200, the Moto G6 is a fantastic phone combining great design, specs and software, and the G6 looks and feels much more expensive than it really is. You get a decent 18:9 screen, fingerprint scanner, dual cameras and long battery life to boot.

It’s been a long time coming, with an interlude for the G5S arriving last year, but the Motorola Moto G6 is finally here. We’ve went all the way to Sao Paolo, Brazil, to see it launch and now we’ve spent enough time with it to bring you a full and in-depth review.

Not to be confused with the LG G6, this is the Moto G6, the latest generation of Mororola’s affordable phones. Now owned by Lenovo, the new G6 might not be a budget phone any longer but the handset can take-on the popular and hard fought mid-range.

It will have to outpace recent successes such as the Nokia 6 and the Honor 9 to reach the top spot.

The Moto G6 originally cost £219/$249. In the UK you can get it on contract from Vodafone, and we’ve also rounded up the best Moto G6 deals.

Amazon UK also has an exclusive model with more memory and storage for £239, though this is now generally easy to find for less than £200, making it an even better bargain – though you may want to consider spending a little more for the newer Moto G7.

Either one is a great price, but you might be tempted to spend more on a phone like the £399 Honor 10.

However, it’s quite clear that this is the new model in the overall style. Largely as it has the now familiar tall 18:9 aspect ratio for the screen that is all the rage. But there’s more to it than that.

We particularly like the 3D rear glass on offer here that’s reminiscent of the Galaxy S7 and also the Honor 9. The Moto G6 looks great and feels nice to hold, too. If you want to keep your Moto G6 looking good for longer, check out our round up of the best cases for the Moto G6 (and G6 Plus).

We’ve been testing out a particularly sleek Deep Indigo blue model and we like the segmented detail around the cameras which dances as it reflects light. This is the main colour but you can also find it in Silver, Black and Blush.

The Moto logo on the back isn’t dimpled anymore, which previously made it nicer to hold.  The camera module remains circular, even if it does still stick out a little way.

Bezels around the screen are reasonable but nothing that can really be complained about at this price. At 8.3mm thick and 167g the Moto G6 feels like the phones you’d expect.

It’s good news that Motorola has kept the headphone jack and the G6 is also water repellent thanks to a p2i coating. It’s also worth noting that the firm supplies a transparent case in the box ( we’ve rounded up some alternatives, too).

So the Moto G6 looks like a much more expensive phone than the price suggests, but do you get better than expected specs and performance?

As mentioned earlier the screen has moved to an 18:9 ‘Max Vision’ aspect ratio and, combined with smaller bezels, the Moto G6 offers a much larger display compared to its predecessors.

The G5 was just 5in and the G5S was 5.2, but the Moto G6 is a whopping 5.7in. It sounds like a big jump but it’s pretty normal for 2018 and even if you’re not used to it yet, you’ll quickly get on-board. It’s when screens get to 6in and above that they get much trickier to use with one hand.

Motorola has opted for a Full HD+ resolution so that accounts for the extra tall display and maintains the 424ppi pixel density. The technology also sticks with IPS LCD.

Even without considering the price point, we’re very impressed with the screen. It’s very suitably crisp and offers decent colours. The screen isn’t the brightest around at a maximum of 270cd/m2 – over 300 is better but this is good enough for most situations.

Similar many flagship phones, the G6 has a sort of always on display. Moto Display means you can wave above the phone to get information like the time, date and battery percentage. Notifications will also fade in and out when the screen is off.

You’ll also like our  Moto G6 vs Nokia 5 comparison.

One of our main gripes with the Moto G5S was the same Snapdragon 430 processor but things have moved on here to the Qualcomm Snapdragon 450. It’s a 1.8GHz octa-core processor.

You’ll get 3GB of RAM and 32GB of storage unless you opt for the Amazon exclusive model which has 4/64GB for just £20 extra. Well worth it if you ask us.

It’s also worth noting that the G6 Plus model has a more powerful Snapdragon 630 processor but it doesn’t benchmark much better, even against the 3GB G6 model. We’ve found real world performance to be perfectly good with the G6, so it’s not an obvious jump to the G6 Plus unless that model has things you want like the bigger screen and improved cameras.

Note that the G6 Play benchmarks better in graphics tests due to its lower, and therefore less demanding, screen resolution. You won’t notice a big difference between the two phones in this area. What’s more important is that the Honor 9 does offer a bit a of jump so if you can afford it, it might b worth the extra (our benchmarks are from the 6GB Honor 9).

All the G6 phones have a microSD card slot so you can add 128GB more if needed.

Motorola has moved onto USB-C which is good to see and there’s still a headphones jack which we’re over the moon about. The phone surprisingly also has Dolby Audio you can toggle on and off.

The front mounted fingerprint scanner can be used to switch the screen off, simply long press it. The G6 also has the option to unlock the phone with your face and it works fairly well, even in lower light.

Moving onto cameras, and the Moto G6 is ones of the cheapest mid-range phones to come with a dual camera setup. The resolution might have dropped from 16- to 12Mp but there’s now a secondary 5Mp cameras.

While most dual camera phones use the second lens for telephoto or perhaps a monochrome sensor, Motorola uses it for various tricks. It enables a portrait mode with bokeh blurring but also other things like being able to make a photo black and white apart from a colour you choose.

Overall, we’re really impressed with the cameras on the G6 – although the app can be a little slow at times but not too much.

The phone is capable of some really great shots in good conditions, offering excellent detail, exposure and colour. With the added ability to play around with the modes. Like most cheaper phones, things go downhill somewhat in low light, but the result isn’t too bad at all.

Motorola has done a great job to offer quality like this in a phone that’s only marginally over £200.

At the front is an 8Mp camera which is nothing special but it’s decent enough. You can record video on the G6 at a maximum resolution of 1080p. The G6 Plus can shoot 4K but the regular model can at least stretch to 60fps.

The video quality is reasonably good, with the digital stabilisation doing an impressive job of keeping things smooth despite our best efforts. Conditions were very windy so you have to excuse the sound quality.

In terms of battery life there’s a typical 3,000mAh battery and the phone has lasted very well during our time with it. It’ll gladly get most users through a day of usage. In our Geekbench 4 test, the G6 managed an above average nine hours and 15 minutes with an efficiency score of 3516.

That’s impressive for a phone this cheap and the G6 also benefits from Motorola’s Turbo Charger which is supplied in the box. You can get a whopping 49 percent from a 30 minute charge, around 10 percent more than most phones we’ve tested which is great.

The Moto G6, as you might expect, comes with Android 8.0 Oreo out of the box. As usual, Motorola doesn’t mess around with the stock Android interface much at all. You won’t find loads of annoying pre-loaded apps or other major tweaks here.

It is a bit of a shame to find LinkedIn and Outlook pre-installed  on our UK sample and you can only disable them, not fully uninstall.

The software is still more minimal that most and keeps the storage pretty free. Motorola’s other additions are genuinely useful, as they have been previously.

What in bygone days would be multiple apps is now just one called Moto. And this contains various things you’ll find useful including Moto Voice for voice commands and Moto Display to control notifications and things like attentive display (keeping the screen on while you look at it).

There’s also Moto Actions for various gestures including twisting the G6 twice quickly to launch the camera. A new feature is Moto Key which allows you to manage passwords and log ins with the fingerprint scanner.

It’s all worth checking out to see what features you like. We’re big fans of the way the app makes all these extras nicely accessible, rather than simply having them hidden away in the settings menu where you might never find them.

At just £219, Motorola is offering a fantastic phone in terms of combining design, specs and software.

It might not be waterproof, but a water repellent coating is better than nothing and the G6 looks and feels much more expensive than it really is. You get a decent 18:9 screen, fingerprint scanner, dual cameras and decent battery life to boot. 3GB of RAM and 32GB of storage won’t be enough for everyone but you can upgrade for just £20 with the Amazon model.

The Moto G6 is a mid-range bargain.