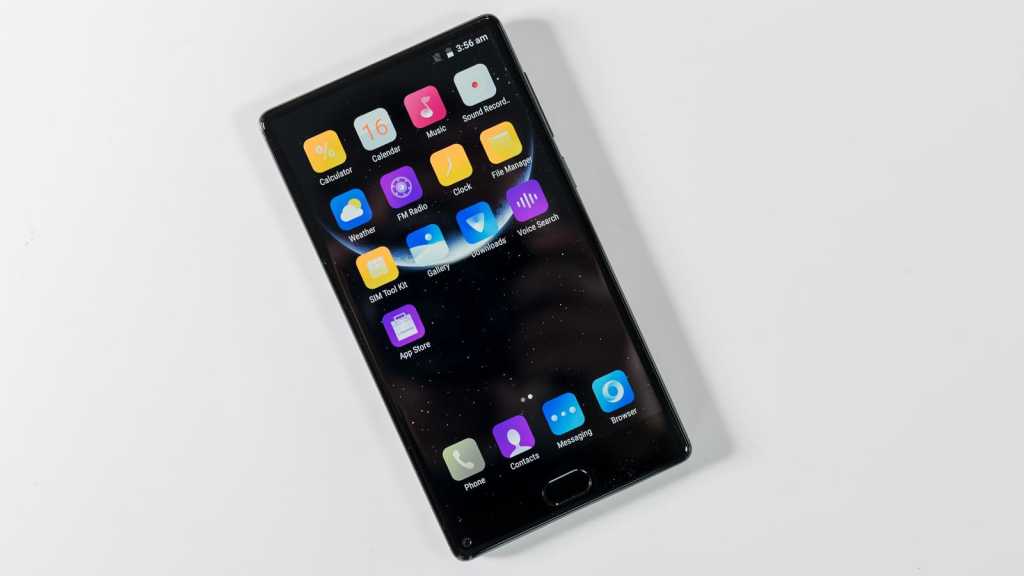 A nice screen and dual-cameras make this sub-£100 smartphone seem too good to be true. Performance is admittedly slow, but it’s the frequent software crashes that stop us recommending the Leagoo Kicaa Mix.

Being on a budget shouldn’t have to mean you’re forced to buy a cheap-looking phone. The Leagoo Kicaa Mix is a sub-£100 phone that doesn’t let its price stop it following recent trends, but does it cut one corner too many?

Import duty will add to the price a little (20 percent of the value on the shipping paperwork, plus an admin fee of around £11), but this is still a super-cheap Android smartphone.

The latest trend in smartphone design is the full-screen or ‘bezel-less’ display. No phone has yet reached a truly bezel-less design, with the Kicaa Mix one of several Mi Mix copycats to (sort of) remove the top and side bezel and squeeze everything into the phone’s chin. (We say sort of because there is still some bezel here that could be removed.)

That includes a home button with integrated fingerprint scanner (yes, on a sub-£100 phone), and the selfie camera. The difference here is that the camera sits on the left side rather than the right, but you’ll still have to turn the phone upside down to use it: super annoying.

Leagoo has also moved the ear piece that would usually be at the top of the screen to the top edge of the device, resulting in a phone that’s capable of most things except its primary purpose of holding phone conversations – unless you have super hearing.

But while the Kicaa Mix adopts the virtually all-screen front (here 90 percent screen-to-body ratio), it doesn’t copy the typically 18:9 aspect ratio that allows for larger screens that are taller rather than wider, and more manageable in the hand. The Leagoo’s full-HD screen has a 16:9 aspect ratio, and 5.5in on the diagonal it results in a handset 75.8mm wide.

Even at this size the Kicaa Mix is manageable in a single hand – a feat simplified by curved sides at the rear – though it feels like a chunk. Nonetheless it’s reasonably slim at 7.9mm, and doesn’t tip the scales too far at 158g.

The 5.5in panel adorning the majority of the front of the device uses IPS tech to produce realistic colours and decent viewing angles. It’s reasonably bright, and at 400ppi crystal clear. It also uses Gorilla Glass 4 to protect from accidental damage. From the front, at least, the phone looks a lot more expensive than it is.

But then you turn it over and are met with… plastic, complete with some blurb at the bottom that refers to the handset as a ‘Stylish Mobile Phone’. Truth be told, if it’s a stylish phone we really shouldn’t need telling as much.

The plastic rear is in three parts, with end caps top and bottom. Leagoo’s certainly done what it can to point toward a premium phone, inserting a dual-camera (of which one of the lenses is just 2Mp), and placing speaker grilles either side of the USB-C port (one of which is not real).

This USB port must also be used for audio, since there’s no headphone jack, but you do get a pair of USB-C earphones in the box (but no adaptor if you want to use an existing set).

Despite its cheap price and plastic design, the Kicaa Mix feels reasonably well made. The battery is non-removable and the dual-SIM tray side-loading, which means there’s no creaking or flex within the phone’s body.

In design the Kicaa Mix does a successful job of pulling off a look that’s a cut above its price tag. But the same sadly cannot be said for the user experience: the Leagoo is painfully slow, and plagued with software crashes, making it impossible for us to recommend.

It runs a low-power 1.5GHz MediaTek MTK6750T octa-core processor, which is paired with 3GB of RAM and 32GB of storage. The Kicaa Mix can also support microSD cards up to 256GB in capacity.

Performance in our benchmarks was unimpressive, with the Leagoo recording 611 points single-core and 2607 multi-core in Geekbench 4, and a high of 17fps in GFXBench T-Rex. The 18-point JetStream score was also disappointing.

Performance-wise that puts it a bit lower than the Nokia 5, and about on par with the EE Hawk.

It’s usable performance for casual gaming and everyday tasks such as browsing the web, checking email, watching videos and enjoying social media, but only if you can get past the constant crashes.

The Leagoo Kicaa Mix has a 3000mAh battery (with 10W fast charge) that should easily last a full day. It also supports 802.11n Wi-Fi, Bluetooth 4.0, GPS and 4G LTE covering all UK bands, but there’s no NFC which is necessary for mobile payments.

To those not in the know, the Kicaa Mix could easily look as though it is an amazing bargain on paper: not only does it have a virtually full-screen display, but there’s a 13Mp selfie camera and a dual-camera at the rear.

This dual-camera isn’t as exciting as it first sounds. It’s the same 13Mp camera you find at the front, but paired with a lowly 2Mp lens to hit the dual-camera spec. Both 13Mp lenses have an f/2.0 aperture and 1.12um pixels.

But it is actually difficult to complain about the quality at this price. In decent light it does an acceptable job at auto settings given a steady hand, though HDR mode (middle picture) seems to do little else but lighten the shot.

And in low light the Kicaa Mix is able to distinguish between shades of black and pick out text, without adding too much noise.

The Kicaa Mix runs Android 7.0 Nougat with Leagoo’s Free Me OS, which includes its own app store. It loses the app tray but has all Google services preinstalled.

Unfortunately the software is the one major failing with this phone, and though it may be restricted to our review sample the frequent freezing and crashes make it impossible for us to recommend the Leagoo.