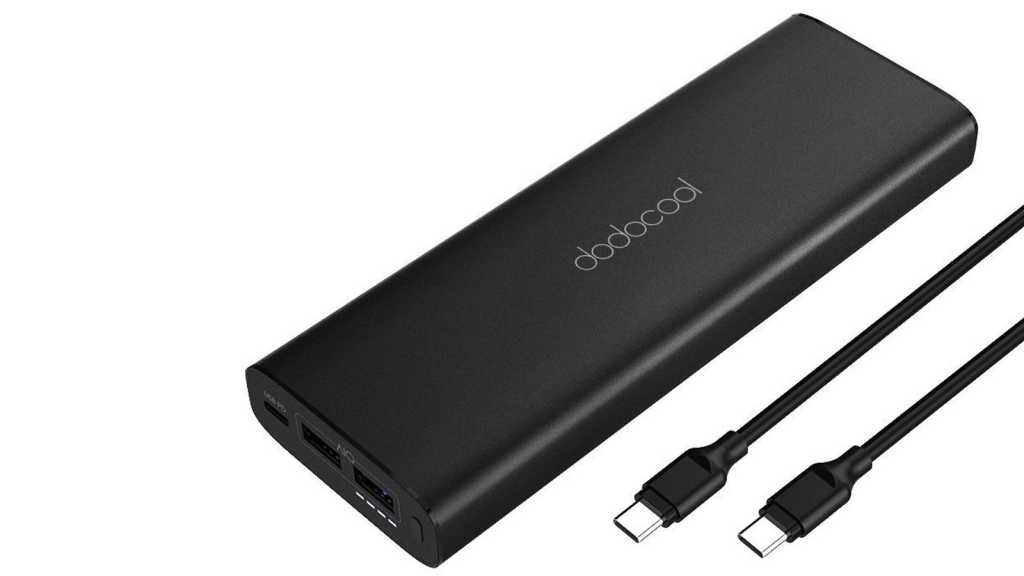 A 45W USB-C power bank that can charge laptops as well as phones and tablets, and all at the same time. Functional in design – and looks – this Dodocool power bank comes at a good price.

USB-C opens up a new world of charging possibilities for mobile devices, but it also complicates things for consumers. Why does a USB-C charger work with your phone, but not your laptop?

All three chargers can power up your phone, but your USB-C laptop is much fussier. While a USB-C MacBook will happily charge from a 29W charger, other laptops prefer 45W or even 65W. And they won’t just charge slowly from a lower-rated charger; they won’t charge at all.

The only surefire way to know how much power is required is to check the specification of your laptop, or of the charger it was sold with. Sometimes doing so is difficult or impossible, though, and in these situations it’s better to look for a charger or power bank with the highest output you can find. It should support your current laptop, and any future USB-C laptop you go on to buy.

The Dodocool 20100mAh USB-C PD (Power Delivery) charger appeals to us because it has a higher output than most power banks marketed as ‘laptop power banks’. Rated at 45W it will charge a USB-C MacBook, but also our Mi Air 12 that refuses to charge from typical 30W USB-C PD power banks. It will even power our Mi Notebook Pro, though it can’t charge it at the same time. As such it is instantly more useful to us than any of those power banks.

The Dodocool is not cheap, but USB-C PD power banks are in a different league to the lipstick-style banks you chuck in a bag to provide an emergency charge for your phone. It’s available from Amazon UK for £43.99 ( Amazon US for $65.99), which is not at all unreasonable for the spec.

Aside from the 45W power rating the Dodocool is notable for a couple of other reasons. First, that USB-C output also works as an input, and if you were to charge it using your USB-C PD laptop charger you’ll fill its battery in just three hours. With passthrough charging support you could even charge another connected device at the same time.

That’s quite amazing when you consider this is a high-capacity 20100mAh bank – though you won’t actually see that much power delivered to your devices. The industry-standard efficiency lies between 60- and 70 percent, so expect a maximum 14000mAh. How many times that will charge a laptop depends on its battery capacity – as a guide, it should charge a Galaxy S9’s 3000mAh battery between 4.5 and five times.

Second, there are two additional USB-A (full-size) outputs, which means you can charge up to three devices at once. These two ports have a combined output of 12W, so they’ll work faster with only one device connected.

So it’s fair to say the Dodocool is a very functional device for charging your mobile devices, particularly laptops. Unfortunately, it doesn’t perform quite so well in the looks department.

This is a chunky rectangular black plastic slab some 481g in weight and 188mm long. It’s not going to fit in a pocket, and neither will it go unnoticed in a bag. It’s very large for a 20100mAh power bank, but laptop chargers aren’t known for their compact dimensions.

Read next: Best power banks for your laptop