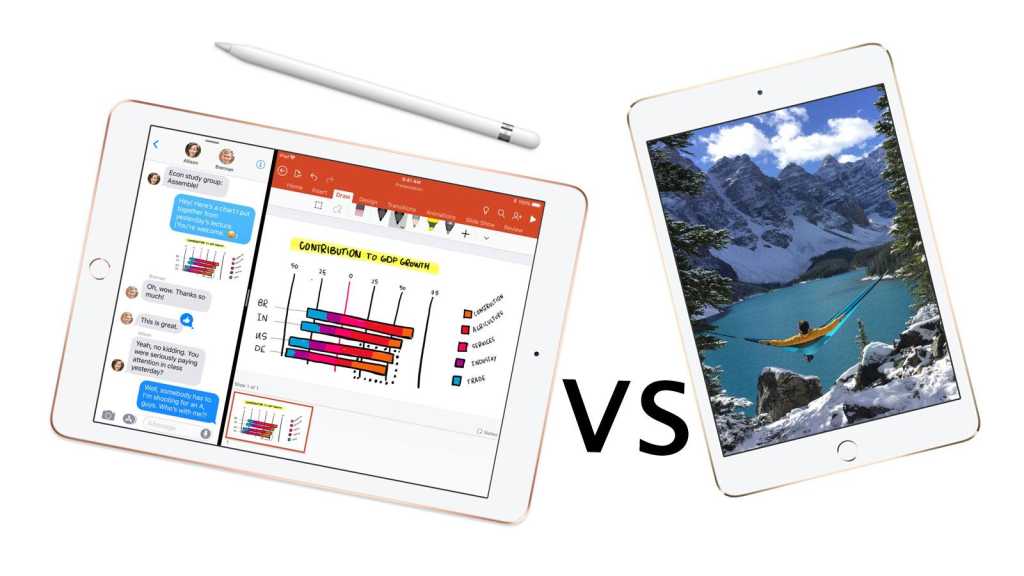 For the vast majority of people, the newer, larger iPad is the best choice. That’s especially true if you can manage with 32GB of storage since the iPad mini 4 is now sold only as a 128GB device so there’s no ‘cheap’ option with it. The iPad 9.7 has a faster processor and supports the Apple Pencil. Disadvantages are minor: it’s bigger and heavier than the iPad mini 4 and doesn’t have a laminated screen. Those are unlikely to put off many people, though.

Rumour has it that Apple isn’t going to launch an iPad mini 5 and the mini 4 could be the last ‘small’ tablet that Apple ever sells. Whether or not that’s true, if you’re deciding between a 9.7in and 7.9in iPad today then your choice is really between the iPad mini 4 and the recently announced iPad 9.7.

Oddly enough, Apple has removed the low-capacity mini 4 and only sells a 128GB version with and without LTE. That means it’s more expensive than the entry-level 32GB iPad 9.7, but a bit cheaper than the 128GB model.

It’s crucial when you buy any iPad to get enough storage since you can’t add more via a microSD card as you can with many Android tablets. Apple has improved iOS in recent years to be more efficient with storage by offloading unused files to the cloud, but even so, you’ll need to decide if you can manage with 32GB or whether you should spend extra and get the 128GB model: those are the only two options with the iPad 9.7.

Obviously, the main difference between these two tablets is their size. One has a 7.9in screen, the other 9.7in. However, their resolutions are the same, so the smaller tablet has the sharper-looking images.

Most people won’t notice the difference, mind. What you probably will notice is that the new 6th-gen iPad 9.7 doesn’t have a laminated screen, whereas the iPad mini 4 does.

A laminated screen removes the air gap between the cover glass and the LCD display itself. It helps when trying to read the screen outside and under bright indoor lighting, but it also makes the tip of the Apple Pencil look closer to what you’re drawing or writing on screen.

Now, the iPad mini doesn’t work with the Pencil, but the non-laminated iPad 9.7 does. The lack of lamination won’t cause any lag or inaccuracy, so it isn’t really a problem. Some people dislike the hollow sound when you tap on a non-laminated iPad compared to a laminated one, though, so if you’re used to an iPad Pro or the iPad mini 4 itself, it could be an annoyance.

Importantly, there’s no major difference in picture quality between the two tablets in terms of brightness, colour accuracy and contrast.

Here’s a handy table so you can see the differences between the two tablets:

Another big difference between the mini 4 and 2018 iPad 9.7 is the processor. Apple has stuck with the A8 chip for the whole time the mini 4 has been on sale. But being the new model, the 2018 iPad gets the A10 Fusion which was first used in the iPhone 7 and 7 Plus.

This is roughly twice as fast as the A8 so, for some buyers, this will be the main reason to opt for the bigger iPad and go for the 128GB version which is only an extra £10 over the 128GB iPad mini 4 for those in the UK. In the US it’s $30 more.

3D graphics are more powerful too, so if you like your mobile games or you plan to use 3D apps, it’s worth getting the iPad 9.7.

The big new feature of the iPad 9.7 is support for the Pencil, Apple’s stylus. This was previously reserved for iPad Pro models, but now it’s available on a ‘cheap’ iPad.

And even if you don’t need a stylus, the mere fact the support is there in case you need it in the future might be enough of a reason – alongside the faster CPU – to go for the newer tablet.

There’s no difference here: both tablets have the same cameras front and rear. They also support the same features: 1080p HD video with stabilisation, plus 120fps slo-mo.

Both iPads are compatible with iOS 11, which is the latest version of Apple’s tablet software. They also support the same multitasking features including Split View which lets you use two apps on screen simultaneously.

Where the iPad 9.7 could hold an advantage is that it may receive iOS updates for longer than the iPad mini 4 thanks to its more powerful processor.