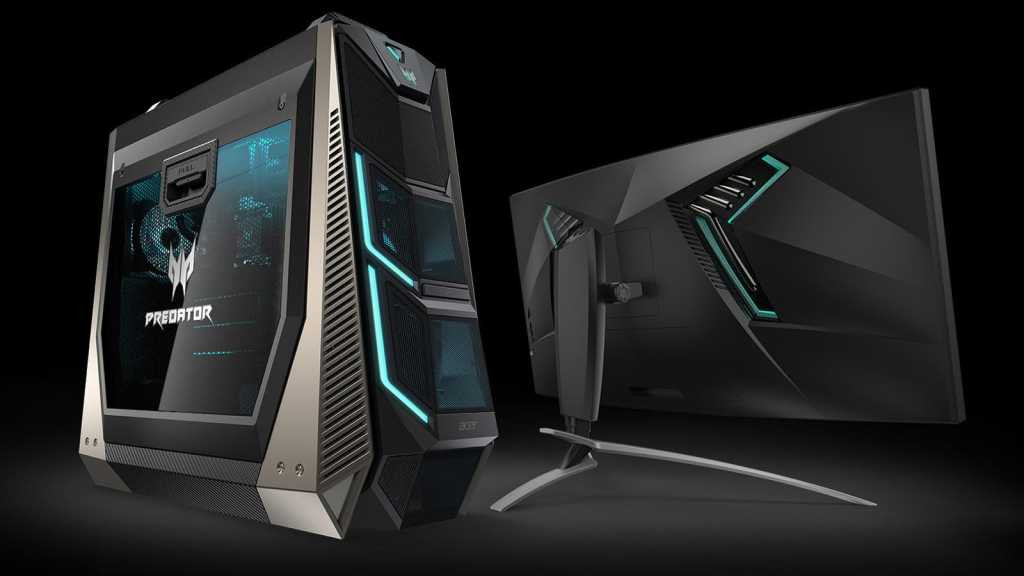 You probably shouldn’t buy the Acer Predator Orion 9000. It’s a luxury purchase for those with enough money to throw at a PC which will exceed reasonable requirements for almost every gamer. But we certainly can’t blame you for wanting one. If you know you will be able to make use of its immense multi-tasking capabilities and still want superb gaming performance, then you may be able to justify the purchase. But if you have this sort of money and you want the fastest gaming system you can get, you’ll probably be better off going for a system based on a Core i7-8700K. The Acer Predator Orion 9000 is as expensive as it is powerful. If you’re happy to throw all ideas of value-for-money out of the window, it will make you the envy of your peers thanks both to its looks and breath-taking performance.

Announced in the middle of last year, but only now becoming available to buy in the UK. Acer’s Predator Orion 9000 made headlines thanks to its eye-catching design coupled with ultra-high-end components including processors with up to eighteen cores.

You can buy the Predator Orion 9000 directly from Acer’s website (currently on a waiting list). There are two models available, starting from £2,999 for the 6-core version and rising to a whopping £4,999 for the ten-core version with dual graphics cards.

The Acer Predator Orion 9000 is a huge, imposing beast of a PC both inside and out. Housed in Acer’s ‘monolithic’ custom-designed system case, the Orion 9000 features an angular space-age design with customisable RGB lighting, easily removable side panels and plenty of space inside.

It’s so big and heavy that Acer has decided to fit it with a pair of wheels at the rear so you can lug it around behind you like a luggage trolley. It’s also fitted with two sturdy handles at the top to make it easier and safer to lift.

At the front, there’s a handy pull-out bar purpose-built as a place to hang your gaming headphones. Acer has also thrown in a DVD RAM drive for good measure.

As you’d expect from a PC at this price point, the build quality is excellent, and because it’s designed entirely by Acer rather than built from off-the-shelf components, everything fits together perfectly, including the Predator Orion 9000’s custom-designed Icetunnel 2.0 cooling system which forms an integral part of the case.

Icetunnel 2.0 maintains four distinct thermal zones within the case, separating off the power supply from the GPU, CPU and storage areas, each of which is delivered its own carefully controlled share of cool air.

Five RGB-illuminated 120mm fans are installed: one at the rear, two at the top and two more at the front of the case. The top two are fitted to the dual 120mm radiator forming part of a Predator-branded Cooler Master liquid processor cooler. There’s plenty of additional RGB lighting throughout the case which can easily be configured to your own preferred colours.

At launch, the Predator Orion 9000’s headline-grabbing specs included support for Core i7 and Core i9 Processors, including Intel’s Extreme Edition 18-core Core i9-7980XE chip. However, only two versions of the PC are being made available in the UK, neither of which supports this flagship CPU.

Instead, you can opt for the 6-core 3.5GHz Core i7-7800X in the entry-level system or the 10-core 3.30 GHz Core i9-7900X in the high-end version. Don’t worry, though, both of these processors are quite bonkers enough for a gaming PC, as you can see in our performance evaluation below.

The less expensive model comes with a 2TB hard drive and a 256GB SSD preinstalled, which increases to 4TB and 512GB respectively if you opt for the pricier system. There’s plenty of room for additional storage in the case too, with room for up to six drives in total.

Custom-designed for the Predator Orion 9000, the Acer PO9-900 motherboard isn’t one you can buy off-the-shelf, and no detailed list of specs is provided either. However, the key features are an Intel X299 Express chipset to handle the Skylake-X processors and eight RAM slots, supporting up to 128GB of DDR4 in total (of which 16GB or 32GB is installed at purchase time).

In the UK the entry-level model comes fitted with a GTX 1080 TI, although there’s plenty of room to double up to a multi-card configuration as found in the high-end version which comes with dual GTX 1080 TI cards as standard. At launch, the PC was shown with up to four Radeon Vega 64 cards installed but, like the 18-core version, this configuration doesn’t look likely to appear in the UK.

Before we dive into the test results, you should note that our review sample was built to a different specification than either of the models available in the UK. Our test configuration included the more expensive Core i9-7900X processor but with a single GTX 1080 Ti graphics card rather than the twin cards found in the pricier model on Acer’s website.

We would, therefore, expect gaming performance to be at a similar level to the lower-end £2,999 system combined with general computing benchmark scores closer to the £4,999 system.

The Predator Orion 9000 includes some super-high-end hardware which, as you might imagine, delivers excellent performance for gaming.

However, it’s the extreme multi-tasking capability of the Core-i9 7900X which makes it so expensive, and this is of little real-world benefit when it comes to gaming. Even general- purpose benchmarks show minimal advantages outside of specialist applications.

If you like to play games while rendering 4K video at the same time, then that might be a different matter, but for the vast majority of gamers, this PC is an expensive luxury.

The PC Mark 10 benchmark, for example, returns a score of 6612 points. This is a great score, but you can actually achieve better results from an overclocked Core i7-8700K which will cost you significantly less and requires a less expensive motherboard too.

It’s the same story for PCMark 10’s ‘Essentials’ and ‘Productivity’ scores, with the Core i9-7900X only pulling ahead once we get to the more demanding ‘Digital Content Creation’ section. Moving on to the PC Mark 10 Extended benchmark, we start to see the Acer Predator Orion 9000 pulling ahead, although only by a relatively small margin.

Thankfully, it’s the PCMark 10 Gaming Score which helps it to gain a lead in this test, although this is largely down to the excellent performance of its Nvidia GeForce GTX 1080 Ti graphics card rather than the CPU.

The situation is summed up quite nicely by the Cinebench single core and multi-core test results which show the Predator Orion 9000 about 25% slower than an overclocked Core i7-8700K system in the single-threaded test, but about 6.5% faster in the multi-core test. From this, we can see that gains are relatively minor and only happen in very specific multi-tasking scenarios.

Gaming frame rates are excellent on the Acer system, with 4K gaming easily attainable on many titles. However, if you want to consistently hit 60 fps plus at 4K with Ultra settings, you may need to invest in a second graphics card to get there.

In this case, you could opt for the more expensive version of the Predator Orion 9000 which comes with two GTX 1080 Ti cards, but this will set you back an additional £2,000, and you would be paying for an even more outrageous CPU which won’t help gaming performance.

Unless you need extreme multitasking, we’d recommend sticking with the less-expensive model and adding a second graphics card to that model instead.

Acer provides three levels of overclocking, which made little difference to overall results but will be of more interest to those pushing the CPU to the limit in non-gaming tasks. The overclocking modes are activated by a dedicated button at the front of the case and managed by a user-configurable pre-installed software application.

As you might expect from a PC with a high-end graphics card and ten cores, the Acer Predator Orion 9000 needs plenty of power when running flat out. We measured a power draw of 92W when just idling at the desktop, which is very high. Under full load, power requirements increased to 440W.

Thankfully the PC’s cooling system performed very well, with core temperatures never exceeding 60 degrees C under heavy load. It is, however, very loud once all the fans spin up to full speed. Acer has promised greater control over fan speeds and temperatures in the future, but this was not operational at the time of testing.

The Acer Predator Orion 9000 comes with a 2-year standard carry-in warranty which is nowhere near the level of cover you’d get from many reputable system builders. This is an important factor when you consider the price of the system and the fact that it contains several components which can only be purchased directly from Acer.