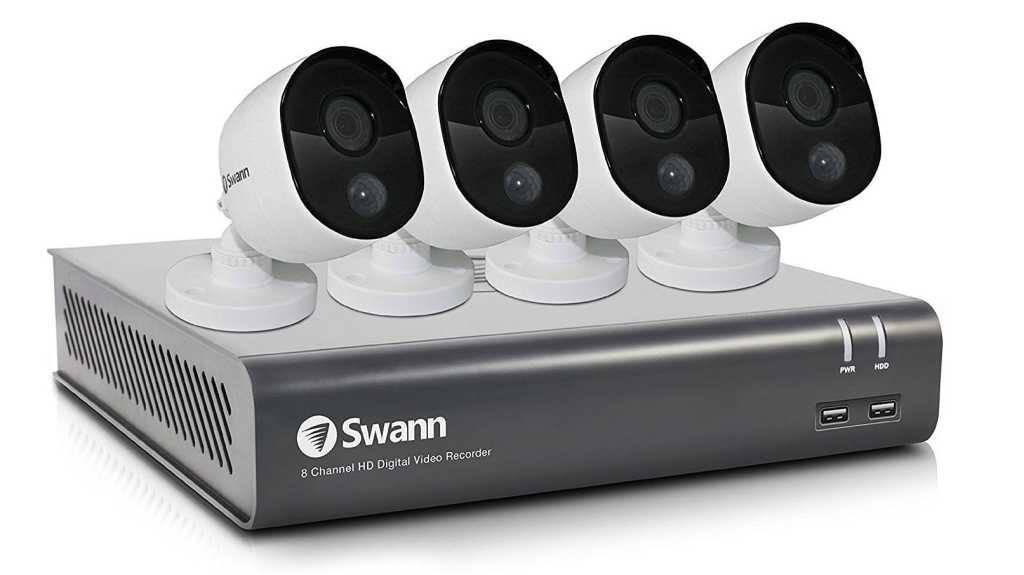 Swann’s CCTV system feels a lot like a traditional system with an internet connection added to bring it up to date. This would be ok if the mobile app were well designed. Unfortunately it isn’t: it’s a pain to use and lacks features you’d expect such as the ability to download footage. The TrueDetect cameras work well, though, and considering you get four of them, it isn’t bad value overall.

Many smart home security cameras rely on the cloud to store video, but this brings with it subscription costs which can quickly mount up if you need several cameras.

A traditional CCTV system is the alternative, but until recently that meant you’d have to live with it being offline and have no alerts or access to the footage from your phone when out and about.

Not any longer: there’s a new generation of CCTV with mobile apps and internet-connected DVRs. Here we take a look at Swann’s four-channel kit which can be expanded with an extra four cameras for a total of eight. Separately, we’ve explained the differences between CCTV and Wi-Fi cameras in depth.

This costs £349.99 direct from Swann or £298 from ebuyer. It costs just US$238.53 from Amazon US. That’s less than £100 per camera, with no ongoing subscription costs, so although the initial purchase price is quite high, it works out cheaper than most Wi-Fi cameras such as Nest, Hive and Y-Cam in the long run.

Be careful because there’s also a four-channel version of this kit which is fractionally cheaper, but lacks the extra four ports for connecting additional cameras.

Extra cameras aren’t cheap, though. To buy the 1080p thermal-sensing ones individually will cost around £90-100 in the UK. You can buy a twin-pack direct from Swann for £129.99 though.

Swann makes other compatible cameras, too, and because the DVR has BNC connectors, you can attach cameras from other manufacturers too (but note those may not work for motion-detection alerts).

This is very much a traditional CCTV system with an internet connection and mobile app bolted on. That means the cameras are connected by wires to the recording box, using old-school BNC connectors.

There’s nothing wrong with this at all, but you’ll have to drill fairly sizeable holes so the connectors can slide through your walls and reach the camera. Cables run through the centre of the camera mount, so they’re not on show and can’t be cut by a thief.

The cameras are plastic and weigh much less than you’d think. But their mounts are well designed so you can adjust them to almost any angle. It’s worth noting, though, that they’re designed to be attached to something horizontal such as soffit boards. You can mount them on a vertical wall, but then you’ll only be able to adjust the lens up or down: the camera will point straight forward and can’t be turned left or right.

They’re designed for outdoor use and are IP66 rated for water resistance. During our tests, they survived plenty of rain and a lot of snow, too, and worked fine throughout even in sub-zero temperatures.

Swann makes it sounds like the ‘state of the art’ thermal-sensing technology is a new innovation, but it’s the same type of PIR sensor that home alarms and outdoor floodlights have always used. It’s still better than the motion detection used in many Wi-Fi home security cameras, though, as they tend to send you alerts when trees and plants are blowing in the wind, or when the sun comes out from behind the clouds. With this system, you should only receive alerts when heat is detected, such as a person, car or ‘large’ animal. In our tests, cats aren’t picked up.

Whether the 60ft (18m) cables are long enough depends on the size of your property and where you need to install the cameras and locate the DVR. You can buy extensions, though.

Included in the box is an HDMI cable so you can hook it up to a PC monitor or HDTV. This needs to be done for the initial setup, but after that you can run the DVR without a screen and just use the app on your phone, tablet or in Windows.

There are two USB ports on the front, one of which you’ll use for the bundled mouse which controls the interface and on-screen keyboard. We did try connecting a USB keyboard, but it didn’t work.

The spare USB port can be used to attach a USB flash drive or hard disk to download videos for keeping or sending to others.

There’s no Wi-Fi, so you’ll need to place the DVR near your router, use a very long Ethernet cable or invest in some powerline adaptors to get an internet connection to the box.

The included cameras record at 1080p, but they don’t have microphones so you can’t hear what’s going on. It also precludes two-way talk, which quite a few smart home cameras now offer.

They use infrared LEDs for night vision, and this works just as well as on most other security cameras we’ve tested. Swann claims a range of 30m for night vision which is about right.

Quality during the day is good, but certainly not the best we’ve seen from 1080p cameras. But for identifying someone, it’s absolutely fine as long as they aren’t too far away. There’s certainly enough detail to see what’s going on.

At night – as with all infrared systems – you lose a fair chunk of detail and all colour information. But the image is still clear enough for security purposes.

More importantly, the motion detection system works well. We ran it for several weeks in varying weathers and, apart from a few false alerts due to a snow storm and the sun shining almost directly into one camera, it picked up and recorded all the important events we would have expected.

The bad news is that the user interface on both the recorder box and the app makes it hard work to get to those videos. On the box, the initial setup process makes you feel like a system administrator in the 1990s: it’s like using the BIOS from an old PC, only without keyboard support.

That means that you have to enter your admin password by clicking on letters on a virtual keyboard.

Since few people will want to download and pore over the full manual, we thought we’d attempt to work out how to view recorded motion events without it. That turned out to be a lot harder than it should be.

Rather than hide away all the options bar those that normal people will actually want to use, Swann presents everything as if it has equal importance. But once you’ve found the appropriate section, it’s then a steep learning curve to figure out how to choose the date and time (and which cameras) to view, and what type of view you want: general, quickview, motion etc.

We’d set all our cameras to record motion only, rather than continuously, so playback jumps to the next event marked on the timeline and – as with all CCTV systems – you can speed up playback rather than having to painstakingly watch in realtime.

A neat feature is QuickView which displays multiple events from one camera on screen at the same time. This lets you review events much faster.

It’s relatively each to select a clip and download it to a USB stick, too.

In the mobile app, the interface is similarly bad. It’s confusing because there are several Swann apps you can use, but the intended one for this system is called HomeSafe View. None of the apps offer a welcoming setup wizard: just a blank bank of screens. You’re left to figure out how to add your system, which is actually very simple once you find the option: scan the QR code on the DVR and enter the password you chose when you set it up.

After a false start, the live views from the cameras appeared in the app in a grid, just like on the DVR itself. The main menu lets you choose between watching live, replaying recordings, checking alarms (alerts), viewing images (still images captured from video) and managing the DVR.

The Playback section is the opposite of user friendly. You have to select a channel (a camera) then tap on a date for which you want to see recordings. Then you have to choose whether you want to view All, IORecord, Normal, Alarm or Motion. This has to be done for each camera you want to play back.

You don’t get the QuickView option, but you can scrub through the timeline and change the playback speed to review footage more quickly. By default, you see the video in a square thumbnail all squashed up but you can choose various aspect ratios once you figure out that you can scroll past the playback icons at the bottom of the screen to find extra controls that let you do this.

If you see something you want to keep, you can press the camcorder icon and this creates a recording which appears in the Record section. They’re not stored on your phone, though, and can’t be downloaded for convenient sharing.