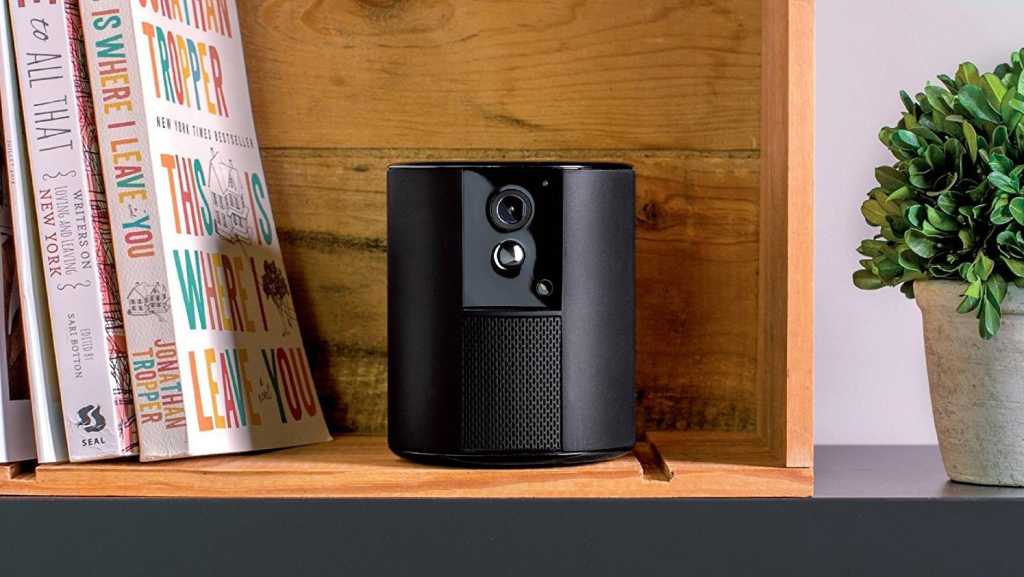 Despite having a bulky and somewhat awkward design that doesn’t allow for angle adjustment, the Somfy One is a great smart security camera. The camera is crisp and clear, the motion detection is accurate and the ability to edit motion zones is a nice touch. It even boasts advanced features, like Smoke Alarm Detection and a built-in 90dB siren to deter intruders. The downside is that the paid plan to access longer video clips is a little pricey (£3.99 to access longer clips from only the past 24 hours), especially when you consider the initial £220 you have to pay for the camera. Oh, and the fact that you can’t disable email notifications is bound to annoy some, too.

If you thought Somfy only produced smart shutters, you’d be wrong – the company acquired smart home security company MyFox back in 2016. The Somfy One is the first smart security camera to come from that merger, and offers a myriad of advanced security features that could secure your entire home (at a price, of course).

But with so many companies producing cheap, reliable smart security cameras, is the £229 Somfy One a little too expensive to compete? Here’s our Somfy One review.

Before we get into the juicy details, let’s first discuss the pricing and availability of the Somfy One as it’s not exactly the cheapest smart security camera on the market. In fact, at £229 it’s one of the most expensive smart security cameras available in 2018 so it needs to offer some bang for its buck to make it worth the price. It does offer a handful of rather unique features that may help justify the price-tag though, including a built-in 90dB siren and the ability to extend the ecosystem into a complete smart home security system.

If you’re interested in picking up the Somfy One, you can order it from the Somfy website and Amazon for £229 in the UK, while those of you in the US are out of luck for now.

The Somfy One is quite small in terms of dimensions (110 x 90mm & 260g) but is actually fairly bulky in design. It employs a circular, tube-like design with rubber feet on the bottom for extra grip. Overall, it’s a nondescript smart security camera that should blend into most environments – exactly what a good security camera should do. Though with that being said, it does only come in one single colour – black – so if you’ve got a white room, it may stand out a bit.

We could forgive the slightly bulky design of the camera if we were able to adjust the angle of the camera, but sadly that’s not the case. The camera does feature a wide-angle lens to cover as much of the environment as possible, but with no angle adjustment, it does limit the number of places you can place the camera as it best performs at eye-level and not too high or low.

You’ll also notice a white LED on the front of the camera that displays the status at a glance. It’s a handy feature as you can quickly tell if the camera is connected or if somebody is viewing the livestream, but it also makes the position of the camera obvious, especially at night.

The LED can make feel people conscious of the fact that there’s a camera there recording everything they do. While some may like the peace of mind it provides, for those that don’t, there’s sadly no way to disable it.

Oh, and don’t go thinking that the bulky design is due to the inclusion of a battery that allows it to work wire-free, because the Somfy One requires a power supply for operation. This somewhat limits the placement options for the camera, although the provided microUSB cable is fairly long.

Thankfully, the plethora of features available with the Somfy One can help you overlook the bulky design. Let’s start off with the camera. It features a 1080p HD camera with a 130-degree wide-angle lens with built-in night vision capable of lighting distances of up to six metres away.

Though there are cameras with wider-angle lenses available on the market (the Logi Circle 2 offers 180-degrees), we were impressed with just how clear the night vision is on the Somfy One. We could pick out relatively small details in dark environments, and the inclusion of infrared-based motion detection means that it performs just as well in the night as it does during the day.

The included motion detection should detect any movement up to five metres away, and it works well most of the time. This is due to the combination of image analysis and infrared detection, according to Somfy, as both types of detection are required before you’re alerted.

It’s not overly sensitive either, and won’t be activated by branches moving by the window, dramatically changing sunlight or even pets wandering around thanks to the inclusion of custom motion zones. Customised via the app for iOS and Android, it lets you easily define which areas to protect and which to ignore. It’s great to see custom zones offered for free when some competitors only offer it to those that pay a monthly subscription.

The reason for the bulky design may be due to the inclusion of an ear-piercing 90dB siren that should be enough to scare off most intruders. The siren can be set up to be automatically triggered whenever motion is detected when the camera is active, or alternatively, you can manually activate it from your smartphone (making it a handy deterrent if you hear somebody break into your house at night when you’re in bed).

Moving on from the siren, the Somfy One features a built-in speaker and microphone that not only allows you to listen in via the iOS and Android apps, but speak to them too. It’s clear enough to converse with people in the room, although we noticed a slight buzzing sound that was always picked up when listening to audio both in livestreams and exported clips.

And for those that are privacy-focused but still want a camera for security reasons, you can enable Privacy Mode on the Somfy One. This will trigger the motorised shutter that’ll physically cover the camera, giving you peace of mind that you’re not being recorded. This is triggered either via the smartphone app or via Amazon Alexa thanks to the Somfy One Skill, allowing you to enable and disable privacy mode and motion detection via your Echo devices.

The Somfy One is also compatible with a range of Somfy security devices that can be acquired at extra cost from the Somfy website, ranging from an alarm FOB to door and window sensors, turning a smart security camera into a complete smart home alarm system.

The mobile app is often the make-or-break for smart security cameras, as the camera itself could be amazing, but with a poorly-designed app it can all fall apart and ruin the overall user experience. Thankfully, the Somfy Protect app for iOS and Android is easy to use with no app-breaking bugs. Once you’ve set your camera up (a process that takes no more than 5-10 minutes), simply tap on the camera icon in the app to view a livestream of the camera. Thanks to cloud integration, you can view the livestream and recordings from anywhere in the world as long as you have a stable internet connection.

From here, you can adjust the quality of the livestream (360p, 720p or 1080p depending on your connection), pinch-to-zoom thanks to the 8x digital zoom support, activate two-way talk or take a photo. Even when not armed, the Somfy One will still detect motion and this is displayed on a swipe-able timeline below the livestream, and in the Media Library.

This is where Somfy’s subscription service comes into play. On the free plan, you can access motion from the past 24 hours, but only 10-second clips. And once those 24 hours are up, the clips are deleted. It’s only when you subscribe to Somfy’s paid plans (starting at £3.99 per month) that you can access longer recordings from the past one to seven days, and download them too.

The app is also where you can access some of the more advanced, optional features of the Somfy One. One such feature is the Smoke & CO2 Alarm Detector mode, which will monitor for the sound of an alarm and will send an alert to your phone when it detects something. It’s a cool feature that can turn a ‘dumb’ fire alarm into a smart one!

A cool feature for iPhone users running iOS 11 is Smart Notification support. Essentially, whenever motion is detected and a notification is sent to your iPhone, you can ‘press’ the notification (on iPhone 6s or later) to display a photo of the motion, and quickly activate or deactivate the alarm. This allows you to quickly and easily determine if there’s an intruder or if it’s a false alarm, and act upon it.