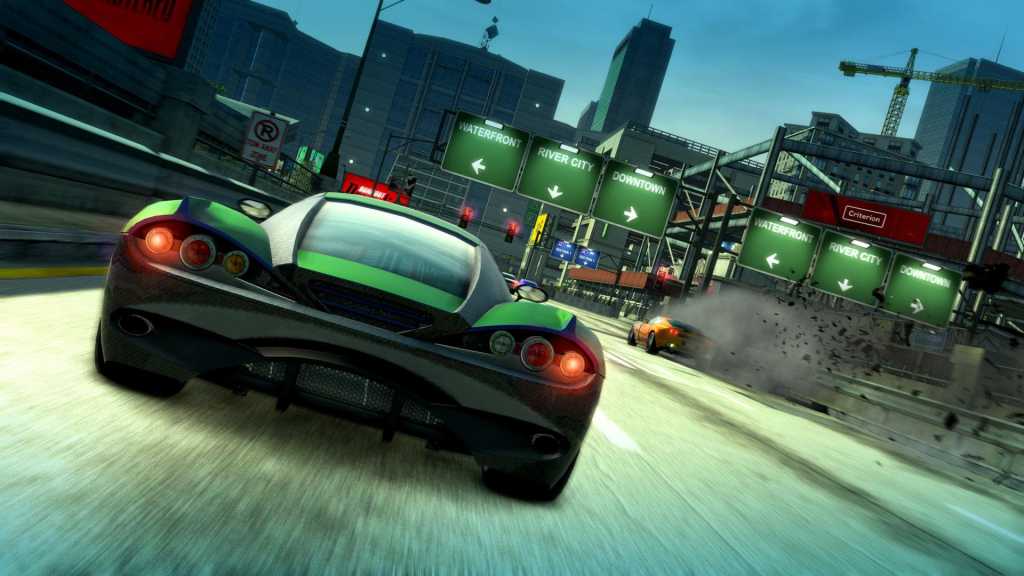 Burnout Paradise Remastered is a lot of fun if you played the original game in 2008, and the 4K@60fps playback is a welcome addition that allows you to really appreciate the finer details of the game, including the impressive crumple mechanics when you inevitably crash. But while it’s a real blast from the past, the game doesn’t quite stand up to modern driving games with the omission of commonplace mechanics like waypoint navigation, fast travel and more. It’s definitely different to anything else on the market at the moment though, so if you’re a racing fan looking for something a little bit different (and a little bit violent/smashy) then Burnout Paradise Remastered is a good shout.

Despite EA’s COO claiming that “we don’t do [remasters]” in a  2016 interview, the company has released Burnout Paradise Remastered, bringing the beloved classic driving (and destruction!) game to the  Xbox One and PS4 woth 4K@60fps support. Was Burnout Paradise the best franchise to remaster, or should the publisher have considered beloved classics like Mass Effect to breathe new life into?

We’ve spent some time speeding around the streets of Paradise City, and here’s our Burnout Paradise Remastered review.

Following the initial announcement of EA’s first remaster in February 2018, Burnout Paradise Remastered is now available to buy around the world.

We do have some bad news though; while the remaster of the hugely popular driving game is available for PS4 and Xbox One (with 4K@60fps support on PS4 Pro and Xbox One X), the same can’t be said for PC gamers – not initially, anyway. EA has confirmed that a PC port for the remastered game is in the works, but that it wouldn’t be available until later on in 2018.

Burnout Paradise Remastered is available to buy both in the UK and US from popular retailers. Those that want to cause havoc on Xbox One can pick up a copy from not only  Game (£34.99) but also the  Microsoft Store (£34.99). It’s a similar story for those that want to race on PS4; it’s available from  Game (£34.99) and Sony’s  PlayStation Store (£34.99) at a similar price. If you want it a little cheaper, you can also pick the game up from  ShopTo for both PS4 and Xbox One for only £32.86.

Burnout Paradise is one of the most infamous driving games from the 00’s, so it shouldn’t come as a surprise that it has appeared in remaster form alongside other classics like Crash Bandicoot and The Last Colossus. But does it provide the same level of polish as other remasters, or has EA hit a wall?

Burnout Paradise Remastered plays on your nostalgia not only in terms of fast-paced gameplay, but in terms of the soundtrack too. It’s evident from the main menu, from the sounds of 80’s classics including Guns N’ Roses’ Paradise City to annoyingly catchy 00’s tracks (like Avril Lavigne’s ‘Girlfriend’) that you’ve long forgotten about. You’ll find yourself singing along to the amazing selection of songs while driving through Paradise City at over 200mph, and it’s a nice touch.

Despite our rose-tinted glasses making us think that this is what Burnout Paradise always looked like (though YouTube clips of the original made us realise otherwise!), it has had a visual overhaul for the latest-gen consoles. First up, it runs at an improved 60fps across the board, providing buttery-smooth slow-mo destruction and making the game feel more responsive than it did back in 2008, and offers a much-improved resolution when compared to the original too. There’s also 4K support for owners of the Xbox One X or PS4 Pro.

But despite the upgrade in resolution and framerate, it’s obvious that Burnout Paradise Remastered isn’t a 2018 driving game. When compared to the likes of Forza Motorsport 7 and Project CARS 2 with jaw-dropping graphics and lighting systems that make it look like the cars and environments are real, the remastered textures of Burnout Paradise Remastered simply can’t compete. It looks great, but it’s far from perfect.

Of course, not all remasters can offer the visual fidelity of The Shadow of the Colossus, but what about gameplay? Has EA managed to re-capture that adrenaline-inducing speed and mayhem in the 2018 remaster? In a word, yes.

When you’re driving around in Burnout Paradise Remastered looking for races and cool stunts, you always feel like you’re going much faster than cars in the majority of modern racing games. The environment blurs, other cars and buildings disappear in a flash and the cars, even when red-lining, sound incredible. The game is full of sloping corners and long, straight roads that really help you to get the most out of your car of choice.

Couple that with roads full of ramps, secret paths to find and billboards to smash through and you’ve got a driving game full of hugely satisfying moments. Whether it’s using your e-handbrake to get around a tight corner or if you’re using your built-in NOS to give you a bit of extra speed as you go off the end of a ramp, you’ll thoroughly enjoy the driving mechanics available in Burnout Paradise Remastered.

But what happens when you crash? It’s somewhat inevitable when driving through a city full of cars and other obstacles at over 200mph, of course. It’s where one of the best features in Burnout Paradise Remastered shines; the impact replays. Just like the original, Burnout Paradise Remastered will show you replays of crashes, slowing down time so you can really watch your car crumple.

The crumple mechanics are impressive too, as the car will crumple differently depending on its design, the angle it hit, the speed the car was going and even the shape of the obstruction. It’s both stunning and extremely satisfying, and makes us want to cause the most carnage possible on the streets of Paradise City.

The game provides an entirely different kind of racing experience when compared to modern racers too. Why? Unlike modern games that provide closed-off tracks, GPS directions or at least a minimap, Burnout Paradise Remastered doesn’t offer any of that. Instead, you must plan out your route from a map on the main menu and use street signs to navigate your way across the city to the finish line.

It can be hugely challenging, but you do feel like you’ve achieved something if/when you cross that finish line, although we would like a couple of more traditional types of race with no cars on the road and blocked off exits a la Need for Speed. That’s not to say there are only one or two types of race; there are several to choose from, scattered across the city. You can focus on races where you destroy your opponents’ cars, you can take on races where the goal is for other racers to destroy only you and, of course, you’ve got Burning Routes.

As you take part in and win races, you’ll level up your Burnout Paradise Driver’s License. You might assume that this will grant you access to more races, but you’d be wrong; as long as you have the required car, you can take part in any race in Paradise City from the get-go. You’ll instead be rewarded with a new car, although you’ll also come across new vehicles to collect when driving around the city, so it’s not the only way to access new rides.

The game also shows its age with the omission of features present in many, if not all open-world driving games. Key features include an on-screen minimap to help navigation, waypoint navigation and fast travel.

You may say “just drive there, it’s a driving game after all” but they’re features that many gamers have become accustomed to, and when you’re a gamer with limited time, these features can make all the difference. It even got to the point in Burnout Paradise Remastered where we’d turn down certain races as they’d take us too far from the city and its races and it’d take too long to drive back.