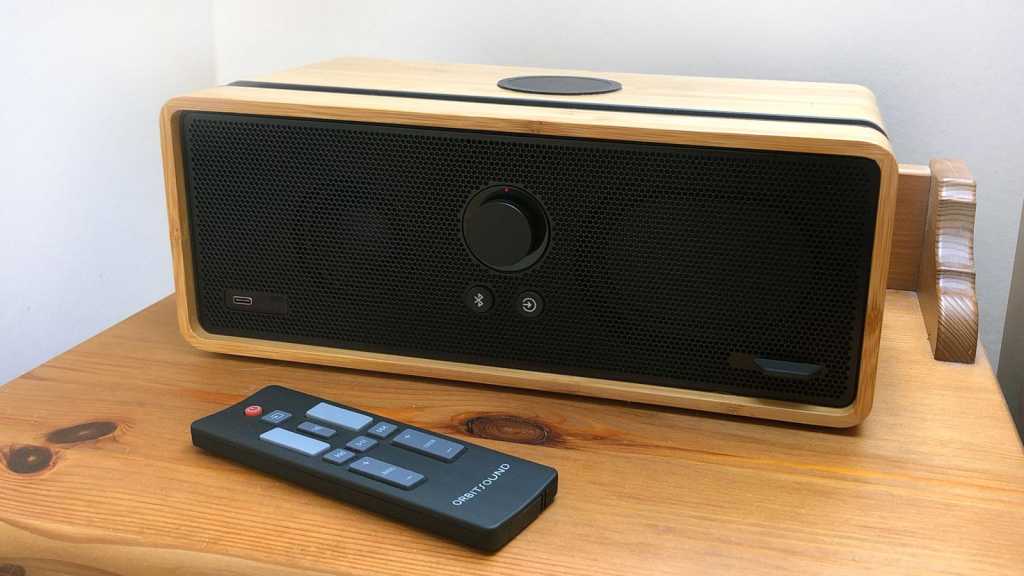 The Dock E30 will appeal to those who can take advantage of its wireless charging pad and USB-C port. It sounds great, too, but the optional sub makes the total bill a bit pricey and the speaker alone is more expensive than a few rivals including the HomePod and Sonos Play:1. You could save money and buy an Apple HomePod, but that limits you to Apple Music and iOS devices. Orbitsound has come up with an entirely more versatile solution that plays nicely with multiple music services and Apple phones but is just as good with Android thanks to AptX Bluetooth, and sounds better than a Sonos Play:1.

The Dock E30 is a compact speaker that sounds great, but also packs in useful extras such as wireless charging for your phone and has the stuff you want like Bluetooth and Wi-Fi.

It’s something completely different from Orbitsound which has traditionally produced soundbars. The E30, though, can be used anywhere: lounge, kitchen, bedroom – even the office.

Although Orbitsound speakers are never cheap, the E30’s £399.99 price makes it more expensive than quite a few speakers from well-known manufacturers: Sonos for one and Apple, too.

Currently Orbitsound doesn’t have any US dealers, so if you want an E30 you’ll have to import it from the UK.

The Dock comes in three colours – all the same price – but it’s the Bamboo model which stands out as the one to pick over the black and white versions.

The current fashion is for smart speakers, but the E30 doesn’t integrate any voice assistant. Instead its smarts lie in other areas – including audio, which we’ll get to shortly.

Orbitsound almost decided to ditch the wireless charging pad on top, but thankfully didn’t as there are plenty of phones which can be charged wirelessly now including all the new iPhones and most of the new Android flagships. 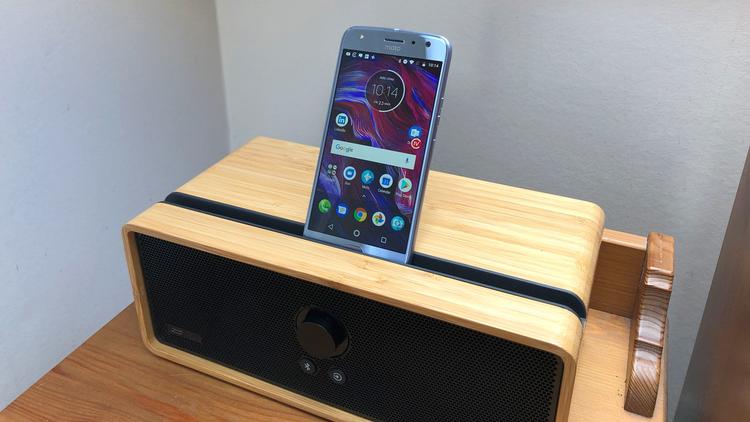 For those that don’t, there’s a forward-thinking USB-C port on the front for wired charging. That’s slightly frustrating if your phone or tablet lacks USB-C as well as Qi wireless charging, but USB-C will be the standard all phones will use in future… possibly even Apple’s.

A carefully designed groove on top accommodate your phone or tablet, but probably not while it charges unless you don’t mind it being upside down or on its side: most charging ports are on the bottom edge.

Like the company’s recent ONE P70W speaker, there’s built-in Wi-Fi and a companion app for Android and iOS. This is mainly for streaming music from services such as Apple Music and Spotify, but is also used for multi-room audio where you can group several E30s and P70Ws together and play music in sync on all of them.

Wi-Fi is also used for connecting the optional wireless subwoofer.

The E30 also works as a Bluetooth speaker, and it’s good to see support for AptX which offers the best sound quality currently available over Bluetooth. Pairing your phone is as simple as pressing the Bluetooth button on the front and finding the speaker in your phone’s list of nearby Bluetooth devices.

Around the back are 3.5mm minijack and TOSLINK optical inputs, potentially useful for connecting wired devices such as an Amazon Echo Dot which would give the E30 Alexa.

There’s a central volume dial which is surrounded by LEDs to indicate the level. If you need it, Orbitsound also includes its usual remote control which offers a mute button, bass and treble controls and an input selection button. 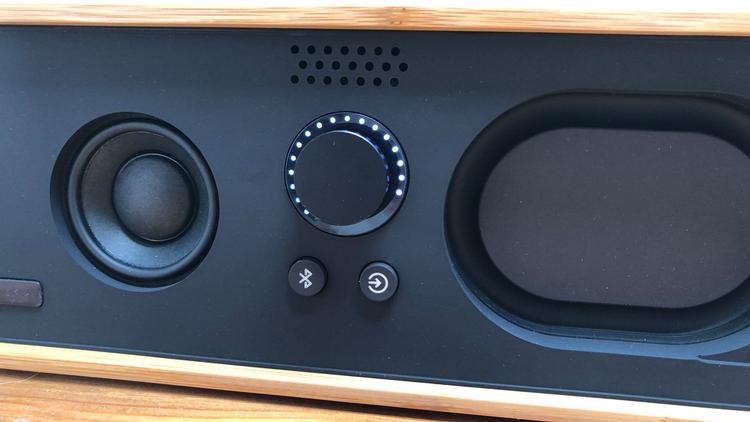 However, you can use almost any infrared remote control as the Dock E30 has the learning function we’ve seen on previous Orbitsound devices.

You don’t need to use the app to choose music on an iPhone or iPad since you can select it from the list of AirPlay speakers. Orbitsound says it will add AirPlay 2 compatibility in the future.

For a speaker of this size, audio performance is very, very good. There’s plenty of volume and a surprising amount of bass.

The E30 has Orbitsound’s signature Airsound technology which creates a wide soundstage no matter where you are in the room.

It does this by employing two drivers facing left and right on the sides of the cabinet and some clever processing which routes the ‘ambient’ sounds to these, but keeps vocals firing forward from the single driver in the front panel. 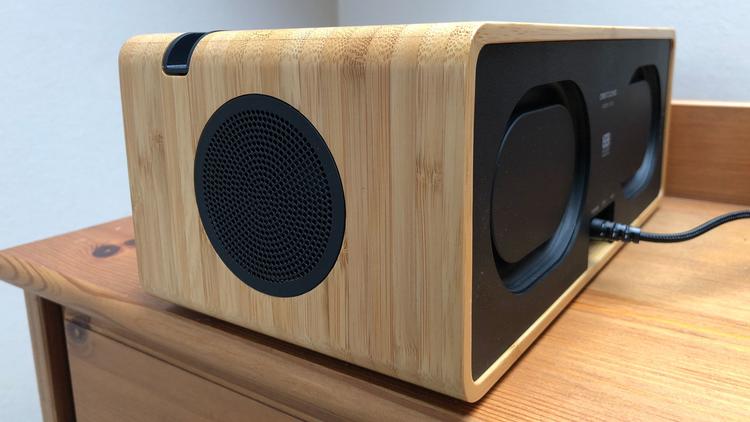 There are three bass radiators, one on the front and two on the rear. They’re responsible for the deep bass the Dock is able to produce, but if you want more you can buy the SUB S4 which costs £299.99.

This can produce frequencies down to 40Hz and connects wirelessly so you can put it anywhere in the room without worrying about how to hide a connecting wire. It doesn’t simply overlap the E30’s sound: when you connect it, the E30 cuts a lot of its own bass and is then able to deliver even more volume. If you love bass, it’s definitely the way to go, but it does push the price up a lot. 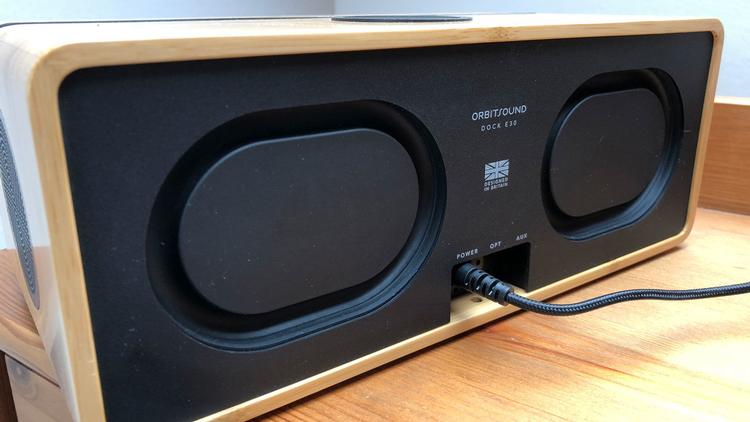 A neat feature is that you can press both buttons on the Dock to gain control over the Airsound, a first for Orbitsound. It allows you to use the central dial to increase or decrease the effect to your liking, making the sound wider or narrower.

Orbitsound is particularly proud that there’s no equalisation happening inside the E30. That means that aside from Airsound, there’s no processing going on to try and achieve a flat response curve and means you should hear music as the artist intended.

We’ve listened to just about every genre of music on the E30 and it copes well with everything from classical to hip hop and deep house. Vocals on Gregory Porter’s Holding On are crisp and powerful, instruments are well separated and bass is strong and controlled.

Pop is handled just as well, with Ed Sheeran’s guitar in Galway Girl remaining audible even in the busier parts of the track. Again, bass is tight and punchy, but significantly deeper with the SUB S4 connected of course.

It’s a similar story with dance music. Fractal’s Itvara sounds great, with Airsound doing its work to create a room filled with ambient sounds, but the Dock on its own can’t quite reproduce the lowest frequencies in the bassline.

Airsound is affected by the positioning of the speaker itself, so you won’t get the best from it if you put it in a corner and block off one of the sides. And although you could put it on a desk where its wireless charging might be useful, you’ll enjoy the sound more if you’re not sat immediately in front of it.