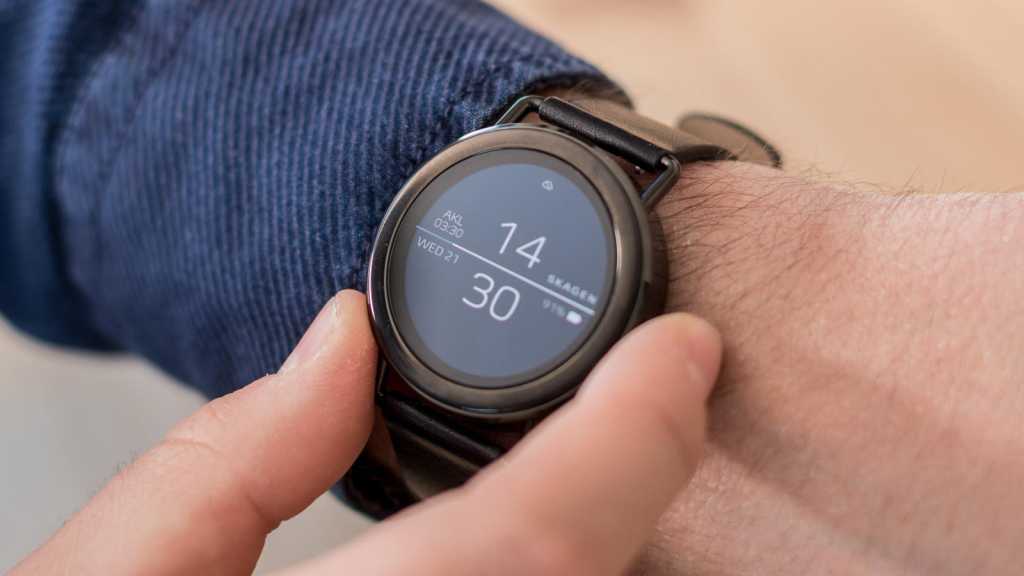 The Skagen Falster is a very basic Wear OS (RIP Android Wear) watch with good looks at a premium price. For £279, we’d usually expect at least a heart rate sensor, but without it, NFC or GPS, this is only a watch for casual step counting from a fitness point of view. But if you have a desire for on-wrist notifications and a smartwatch that doesn’t look too tech-y then it’s one of a few available that has full smartwatch functionality. Fossil has some hybrid models (as does Skagen itself) but we can’t escape that for the price, the Falster doesn’t do enough or last long enough on a charge.

Ah, smartwatches. You were supposed to come into our lives and take over. You could pay for our lunch and count our steps, tell us our heart rate and more while letting us leave our phone at home. But three years after the Apple Watch was launched, Android rivals are few and far between outside most tech circles (Fitbits don’t count).

Android Wear rebranded to Wear OS in early 2018, a move that takes away the ‘Android’ branding and also apes Apple’s naming of its watchOS (and ergo iOS and macOS).

Denmark’s Skagen meanwhile has transitioned from regular watches to smartwatches. Its hybrid smartwatches are similar to Withings’ efforts, but the Skagen Falster is a full Wear OS effort. With Huawei, LG and Moto also in the game, does Skagen do enough for us to recommend over those established tech brands?

There are other versions available but the only difference are the straps, with metal mesh ones costing more.

If one is to stereotype Danish design, you might think ‘minimalism’. The Falster is that, and the design is solid if not of the premium build its nearly £300 price demands. The metal rounded body is solid though, and the watch is a good weight.

It’s great there’s no flat tyre effect that spoils other round smartwatches (a small black cut out used to be the norm to allow for the light sensor like on the Moto 360; they are now integrated behind displays more regularly).

Otherwise the design is unremarkable. It’s pleasingly slim, but most likely because it doesn’t have a heart rate sensor, GPS or NFC – but more on that in a bit.

It’s also a shame that the crown, while a button for menus and Google Assistant, uselessly turns yet doesn’t scroll menus like it joyfully does on Apple Watch or the LG Watch Sport. It’s also the only physical button on the watch.

The watch is always black no matter what, and our review unit is the black leather strap, though you could opt for brown instead. There’s also a silver or rose gold steel mesh band – all are listed here. The strap connectors change depending on the strap colour.

The straps are standard 20mm and while spares and different colours are available from Skagen,  it means you can shop around outside the brand. The Falster’s design means straps don’t sit flush though, so you’ll want to check certain straps don’t look odd.

Overall it’s an inoffensive design and people may not notice you’re wearing a smartwatch, which is something many people may be looking for given most smartwatches look like something out of Tron.

The Falster works best on an Android device, and technically works on any Android phone running OS 4.3 and later, though will work better on more recent versions. The Falster also works on iOS, but with limited functionality, such as only being able to view messages, not reply to them.

The Skagen holds its own in terms of specs against the more tech minded brands though. One of the more important things to note in a smartwatch is the RAM, the higher the better to allow for smooth running of the interface.

Here’s it’s a respectable 512MB, a quite usual amount for a Wear OS device. Even the high-end Apple Watch Series 3 only ups its RAM to 768MB.

The OS is relatively fluid, with a push of the crown to access the familiar app menu, but unfortunately you can’t turn the crown to scroll even though the crown actually turns. A hardware opportunity missed, we feel, as scrolling crowns on smartwatches is a neat touch that is satisfying to use.

So, you have to use the 1.19in OLED touchscreen, which isn’t huge as part of the 42mm body and but the circular design remains attractive at 12mm thick. Skagen’s watch faces are also quite minimalist, but cleverly use black predominantly to maximise battery life – black uses less on OLED displays.

Using the Wear OS app you can customise and change them, and there are a few Google Fit faces too.

Fitness is where the Skagen falls down slightly. Granted, it’s a design-first smartwatch, but its slim design is because there is no NFC, GPS or even a heart rate sensor. Fitness tracking is reserved for simple stats like steps and active minutes. This is not the watch to buy for fitness, and the fact it’s £279 makes that a tad hard to stomach.

There’s 4GB on board for storage of apps, but no option to move music to the device for hands free Bluetooth listening on a run, for example. Then again, without your phone, the watch can’t track your run thanks to a lack of GPS, so you’ll want to bring it anyway.

The Falster can act as a remote control for music though, but so can every other smartwatch. More useful is on-board Google Assistant, which you can ask anything provided you have a connection to your phone and your phone has a connection to 4G or Wi-Fi.

It works pretty well once you’ve given it permissions and is handy if you want to ask Google a quick question.

The Falster’s 300mAh battery is charged via the included wireless charger that you simply place the round back of the watch onto to charge. Battery life is not the Falster’s strong point though, with it lasting barely a day out of the box.

You can turn off the always on display, dim the brightness and switch off Wi-Fi connectivity to save power, but this is to stunt the full capabilities of the device. It’s the same for many smartwatches and remains a problem.

For some reason we are happy to charge our phones once a day, but not our watches. It is also IP67 water resistant, so at least water won’t destroy it.