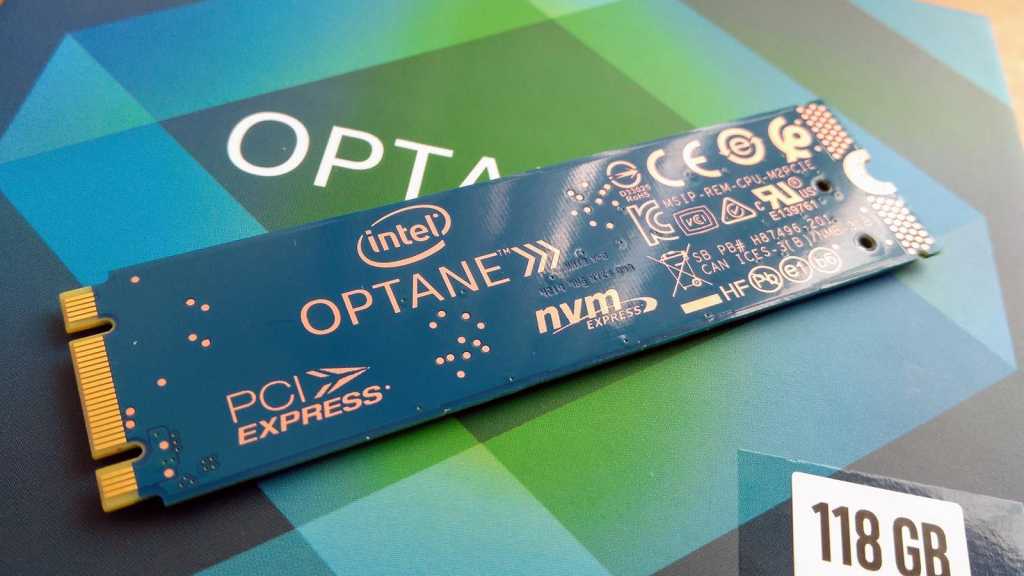 Amazing short queue performance makes a system installed on the Optane 800p seem that much snappier than any NAND NVMe solutions, and it can sustain that speed over the long haul. The downside is that there is only room for the OS and a few apps even on the larger model, and the price seems disturbingly high when compared to NAND.

Intel made plenty of fuss about its revolutionary 3D XPoint memory technology when it was first revealed back in 2015, after a three-year development.

Intel considered XPoint as the logical bridge between RAM level performance and that of NAND flash storage. A technology that promises low latency, excellent resilience and amazingly low queue read and write performance.

On paper, Optane sounded amazing. However, the first branded products underwhelmed technology fans with 16GB and 32GB capacities and a usage model that utilised them as a cache to other drive technologies. It also only worked on Intel 200 Series or later chipsets, because of the special cache concept.

The second Optane product, the 900p, came in a PCIe slot package and offered more useful 240and 480GB sizes. But that extra capacity also came with a massive price tag. The dream of better than NAND PCIe level performance with off-the- scale IOPS for mainstreamusers seemed just that, a fantasy.

But the arrival of the new Optane 800p looks to address some of those issues, and deliver on a few of the promises that Intel made about this revolutionary tech back in 2015.

If we compare this with Intel’s recent NAND 760p, Optane 800p is more than twice the price per GB, and it is marginally more expensive per GB than the Optane 900p.

The only other maker of Optane technology the only 3D XPoint licensee, Micron, and at this time that business has yet to make anything like the Optane 800p.

In short, Optane still isn’t cheap, though there isn’t anything else from anyone outside Intel that is anything like it from a technology standpoint. We can only hope that the Recommended Customer Price (RCP) is pricing guidance that gets largely ignored by retailers, who make the Optane 800p more affordable technology. 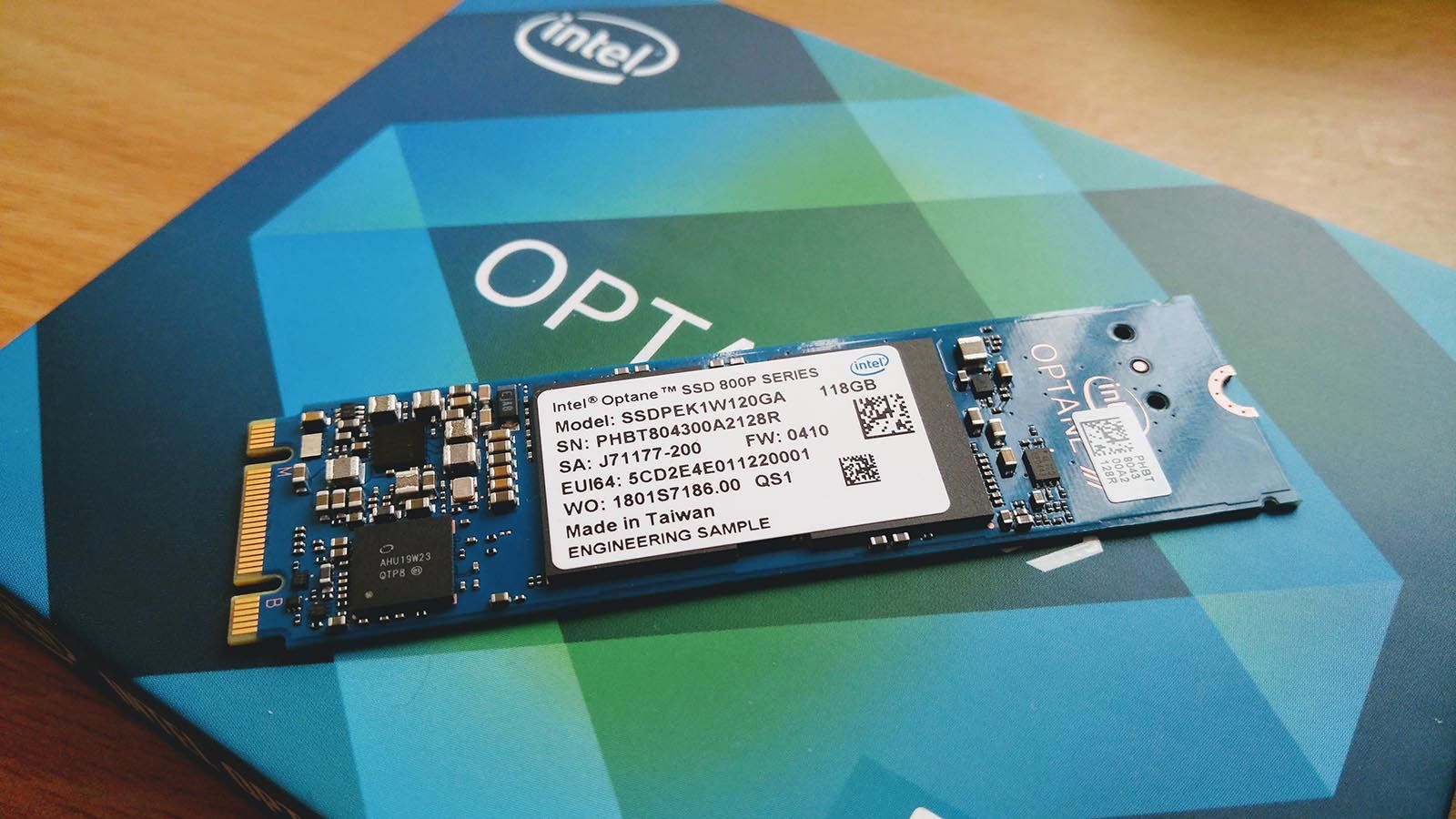 For our review Intel provided both the 58GB and 118GB engineering samples of the Optane 800p, looking almost identical except for the labelling.

These are M.2 2280 single-sided NVMe that use x2 PCIe lanes, and therefore can be used on any PC that has M.2 slots or a card adapter to M.2 PCIe.

Where these diverge from the original Optane NVMe modules is that these aren’t designed to work as a cache, purely as an SSD, and Intel specifically told us not to trying and use them as cache devices.

One oddity of this design is that while these are standard M.2 NVMe drives, they only use 2x PCIe lanes, not the 4x typically needed by NVMe NAND drives. Intel argues that greater than 2x bandwidth isn’t needed to exploit XPoint. This 2x profile also allows you to combine two Optane 800p drives and RAID them using 4x lanes for extra performance.

That would boost the total usable capacity to around 220GB, for those that might find 58GB or 118GB a little too snug for their needs. More on that subject later.

Normally here we’d give you more information about how XPoint memory works and how the controller manages these devices, but Intel (and Micron) won’t tell anyone, not even us.

However, the true story of Optane 800p isn’t in the 3D XPoint chips, as they are identical to those used in the previous Optane products. No, what’s truly interesting here is how they’ve been repackaged to use the M.2 slot, with the intention of providing an alternative to M.2 NVMe drives.

The proliferation of NAND storage devices has funnelled all those that use them into a particular mindset about how they should perform.

Most people look at the headline read and write performance and often look no further. Focusing on Sequential Q32T1 scores and you’ll likely walk away concluding that NAND NVMe drives massively outperform this product on both reading and writing while undercutting it significantly on cost.

The 118GB Optane 800p reads at 1450MB/s and writes at around 650MB/s, and is indistinguishable in performance from the smaller 58GB model.

But surely the better NAND devices are double this performance level and more? Well in a way they are, but a closer inspection of the details reveals a more complicated truth.

Because performance scores for NAND storage are often achieved with drives that are new, and therefore unused, with big queue depths, and advantageous file sizes for the technology. 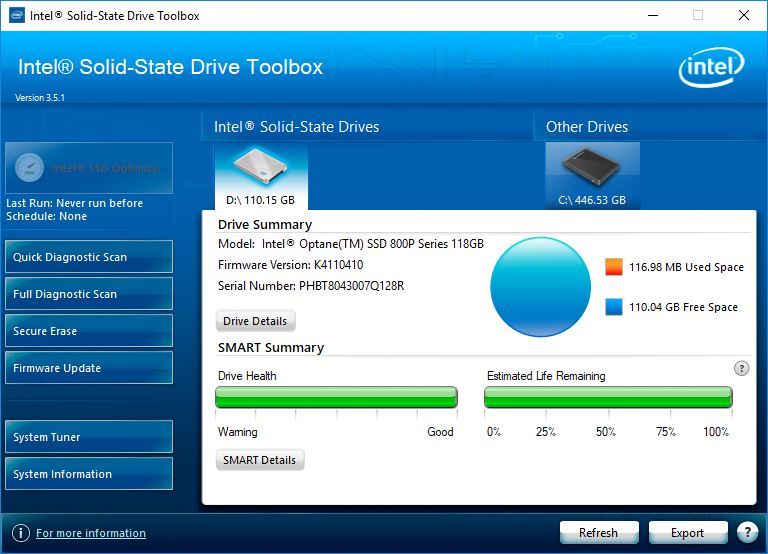 Change the test methods, by using small queues or a very large file, or lots of small files, and suddenly the NAND technology is exposed to direct sunlight, where the average write performance of a 2GB/s rated drive drops to 400MB/s, and latency becomes a factor in overall throughput.

Intel makes the valid point that the typical user has file transfer queues that contain at most a handful of requests and often only one. And, they also write single large files, not tens of conveniently scaled ones for optimal NAND performance.

And, that while the performance of NAND structures tends to decline over repeated use, Optane technology maintains its initial levels over the device’s entire lifespan.

That’s one aspect we can’t realistically test, but we can look at sustained performance and how it compares.

These results support the view that the performance of Optane 800p goes for NAND’s performance jugular, exploiting those precise places where that technology is known to be weak.

The problem with testing these drives is that they don’t work like NAND, so this isn’t strictly an apples-to- apples comparison. That said, some of the numbers from these tests are very revealing, given a modest amount of interpretation.

We are presenting the 118GB 800p scores as in our numerous benchmark runs showed no significant performance difference between it and its 58GB smaller brother.

It is tempting to look at the Sequential numbers and conclude that the 800p is better than a SATA SSD drive, like the WD Blue 3D NAND, but well short of most NVMe drives.

But, the numbers that are most striking aren’t those with a high queue depth, but those that the 800p generates when the depth is just Q1. Mirroring the scenario when a single app asks for data or code components from the drive, and Optane XPoint is dramatically better than NAND.

Using CrystalDiskMark with the 0x00 fill provides no significant change from the Random fill, with the same great sequential Q32T1 scores for the other NVMe, but blistering 4K Q1T1 reading from the 800p.

AS SSD is a useful benchmark, the recent change from 1.9 to 2.0 has thrown something spanner in the works of many testers. Under 1.9 the test enforced by the FUA command (Force Unit Access), where the latest release does not. This command disables caching to the drive, exposing its unadulterated performance.

We decided to test both, and the results presented a compelling case for the 800p. Because on Optane 800p the results with the FUA command on and off are almost identical, as the speed isn’t cache memory dependent.

The AS SSD test was presumably altered because systems aren’t normally run with FUA enabled.

However, if a system writes a file that is greater than the available cache, then the NAND SSD drive will drop to these levels when the cache is saturated. Under those circumstances, the 800P keeps going at 589.02 MB/s irrespective of what demands are made.

The underlying weakness isn’t exclusively a Samsung design problem. All NAND modules have an issue sustaining write speeds without plenty of cache to smooth out the bumps.

But surely, Optane technology can go even faster? Oh yes, with RAID it can. 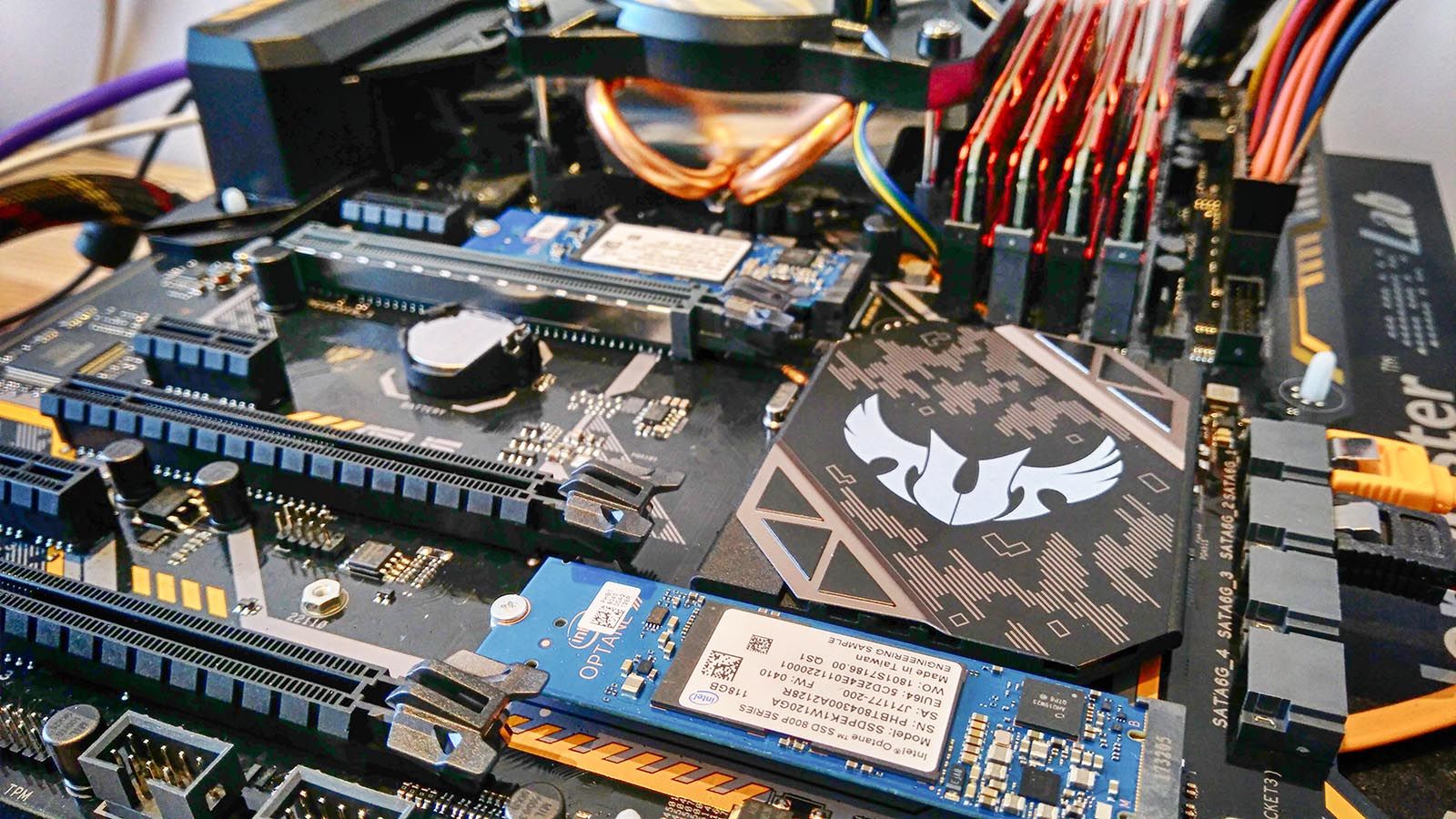 If we imagine a scenario where we’re looking for the ultimate SSD performance and price is no problem, then the Optane 800p can be boosted further using Intel RAID.

To explore this potential we took two Optane 118GB drives, combining them to deliver twice the capacity and double the performance.

The tests were performed on an Asus TUF Z370-PRO Gaming motherboard with dual M.2 slots, using an Intel Coffee Lake Core-i7 8700K CPU for maximum speed. The RAID pack was created in the BIOS, driving RAID operations through the CPU rather than the PCH (Platform Controller Hub).

You can RAID these modules using the PCH or even software, but the ideal configuration requires an Intel 200 or 300 series motherboard with dual M.2 PCIe ports.

Results, as you might expect were spectacular. As the two drives working as alternate stripes of a RAID 0 pack managed to approach the Q32 headline numbers of NAND NVMe devices, yet smashed them to bits in smaller queue situations.

Although we’ve never tested this scenario, Intel has experimented with four 118GB drives in combination, with even more dramatic performance levels.

For those without dual M.2 slots handy, Intel should make a PCI card with two x2 slots on it for just this purpose, we think. 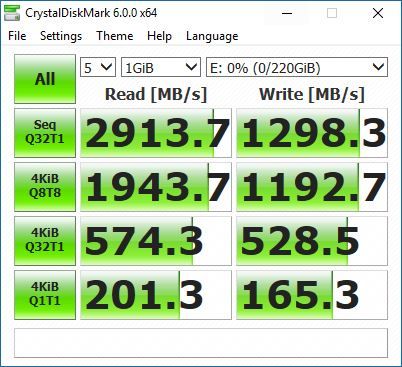 The benchmarks tell an interesting story. They reveal that while Optane 800p can’t deliver the headline read speeds of NAND NVMe drives, yet it can beat it in numerous other ways that are more relevant to a typical PC user.

For those wanting their system to fly the 800p placed in a RAID pack deliver a stunning performance that doesn’t diminish when the going gets tough.

The only snags here are the capacities, sufficient to contain only the OS and a few apps, and the price. Intel needs to make a standard 240GB option if it wants desktop PC users to adopt this technology over NAND. Price is a major factor, given the downward pressure that NAND pricing is under.

One aspect we’ve not mentioned is TBW (Total Bytes Written), which Intel quotes as a very healthy 365 TB on both the 58GB and 118GB. It’s odd that they have identical TBW, irrespective of size. But we’re assuming XPoint is anything like NAND, which it patently isn’t.

On the smaller 58GB drive the TBW would allow you to rewrite every byte of space once a day for 6,293 days or more than 17 years. Therefore, for most users, this lifespan won’t ever be an issue.

One downside for laptop users is how much more power the 800p draws compared with a NAND drive. Where the latest NVMe NAND products are pulling millivolts even when active, Intel is quoting 3.75 watts for the 118GB 800p. That’s more than a 2.5” physical mechanism, although the physical drive would be running for much longer to achieve the same results, balancing this overhead.

NAND probably uses less power than XPoint, but how much this might impact on portable battery life is difficult to assess.

The Optane 800P also has AES 256 bit encryption, should you want to use it on a system that needs to be very secure.

Intel is pitching the 800p as the ‘mainstream’ Optane option, but with this drive sizes and price, it looks a more specialist interest. If you can live with those caveats, then the Optane 800p is offering something very special for those that want it.