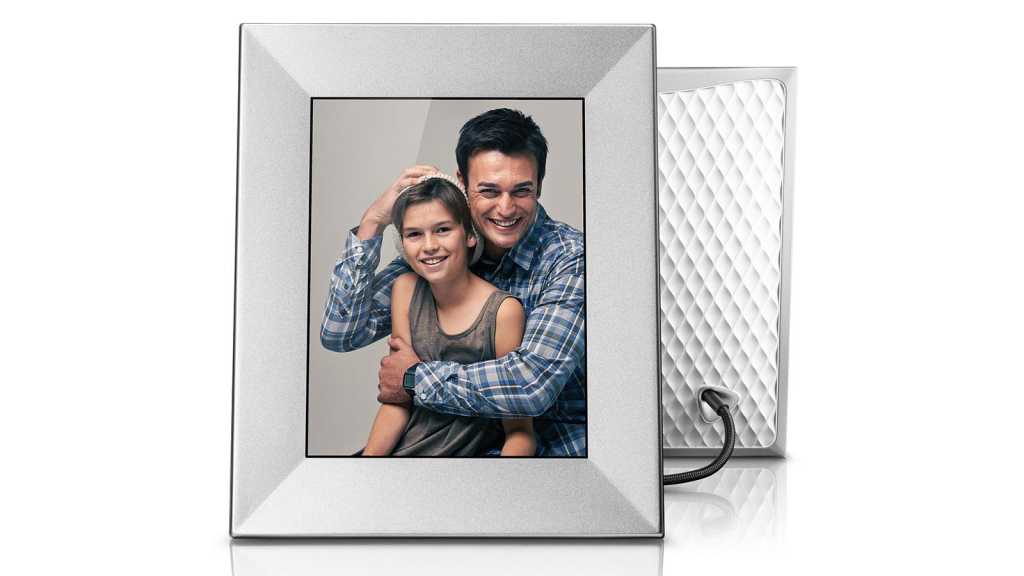 The Nixplay Iris is an attractive digital frame, and the cloud support makes it easy to save your photos from digital dust-gathering. The only downsides are the rather steep price and the slightly low resolution display, but for the moment those are both fairly typical for the cloud photo frame marketplace.

Digital photo frames have come on a long way in the last few years, and the Nixplay Iris is a great example of what people expect from the devices now: connected to the cloud, linked to your social media accounts, and designed to look more like a photo frame and less like a big black block.

That’s a promising start then, but can the Iris live up to the promise? We’ve put the frames through its paces, and here’s what we think.

The Nixplay Iris has an official RRP of £199.99/$199.99, but you can often find it for a good chunk cheaper than that through Amazon so it’s worth having a look before you commit to paying full price.

The most striking thing about the Iris is that, unlike most of its rivals, it actually looks like, well, a photo frame.

Big bezels may be on the way out of smartphones, tablets, and laptops, but here they’re a welcome stylistic choice, with a metallic finish and angled edges that leave the Iris looking like something you’d be more likely to find in IKEA than an electronics store.

You can choose between silver, bronze, or copper finishes – the latter two coming with a black back, while our silver review model has a white finish on the rear. That finish is soft-touch and textured, which means the Iris feels comfortable and easy to hold on the rare occasions you have to pick it up, even if the rear is likely to be out of sight the overwhelming majority of the time.

It’s also almost entirely uninterrupted by ports. With all of the Iris’s photo features handled online, the only port on the rear is for power – and, cleverly, the rigid power cable doubles as the frame’s stand, allowing you to pose it to position the stand at any angle you want, and in either portrait or landscape.

There’s also a small square remote included, which lets you turn the frame on and off and play around with a few of the settings.

Unlike some other Nixplay frames, like the recently reviewed Nix Advance, the Iris comes only in one size, 8in, so no matter which version you get you’ll be getting the same screen.

That’s a 1024×768 IPS display – so technically HD, but not full HD and a long way off 4K. That means photos won’t display at the full quality that your phone camera can likely capture them, but really it’s enough that they look crisp and attractive given the size of the screen.

While some other digital frames play photos from USB sticks or SD cards, the Iris can only connect to the internet and access photos online. You control this through either the Nixplay website or the dedicated phone app, which you can connect to various social profiles or other photo services.

Nixplay has included support for Facebook, Instagram, Google Photos, Flickr, and Dropbox, and you can also add photos directly from your phone through the app, or even send them directly to the frame via email. The biggest service not supported is iCloud, so Apple users will have to make sure to use one of the other options to store their photos in the cloud.

Update August 2018: Thanks to an expansion of the Google Photos API, the Iris’s Google Photos support has been expanded such that not only can you transfer photos from Google Photos, but the Iris can actually directly play whole photo albums from Google, and will automatically include any new photos you add to the album. This also supports Google Photos’ machine learning, so that custom playlists can be created using the object recognition – so you could have your Iris show every photo of a dog from your Google Photos library.

Once you’ve got your photos on Nixplay’s system, you can create albums and playlists which you can sync to your frame – or frames, with support for multiple devices. If you know someone else with a compatible device you can even share playlists with them, so you can each display the other’s photos.

You don’t get any options to edit your photos or add filters, but that’s probably a smart decision, keeping the interface relatively simple and easy to use. On the frame level, you get to control how long photos display for, how they transition, what order they play in, and a few other simple settings.

Other options include a sleep schedule (keeping the frame off overnight or during the workday, for example), a light sensor that adjusts display brightness based on ambient light levels, and an activity sensor to turn the frame off when no-one is around. Unfortunately this is based on sound, and even with the sensitivity turned low seemed to keep the frame on more often than we wanted it to – though that was while testing in a small flat with poor noise insulation, to be fair.

That’s not the end of the world though – it won’t drain the battery life, as the Nixplay Iris has to be kept plugged into the main at all times anyway, so you’ll need a power socket near wherever you want to display it.

One final smart touch is that the frame can automatically detect whether it’s in portrait or landscape mode and will re-orient your photos accordingly, so changing the orientation of your frame is a painless process.

Unlike some other digital photo frames there’s no support for video playback, though we can’t imagine many people would want to use the frames for that anyway. Photos are only supported in .jpg or .png formats, which will be fine for most people – but it’s worth noting that by default iOS 11 saves photos in the new .heic format, which will require conversion first.