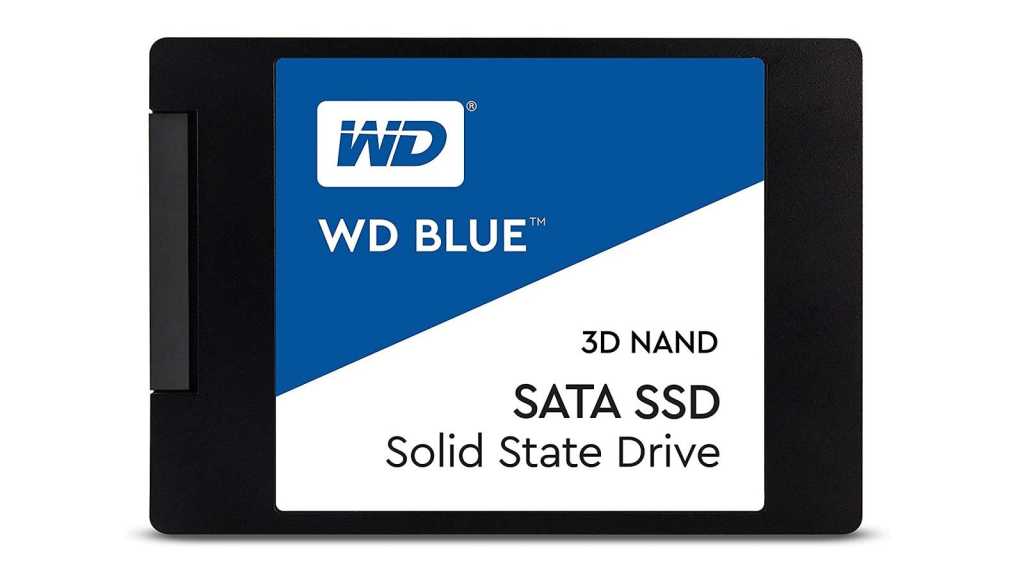 The WD Blue 3D NAND might best represent the last hoorah of the SATA SSD before NVMetechnology kicks that interface into the long grass. It’s a big improvement over its predecessor and gives Corsair and Samsung’s mid-range products a run for their money. Excellent overall performance coupled with competitive pricing makes for a winning combination, or it does for that still want, or need SATA.

When Western Digital entered the solid-state storage market, their first products specifically targetted business customers. After they bought the Sandisk brand in 2015 they quickly branched out into the consumer sector with their WD Blue SSD range.

Their performance was fine, though not exceptional. The 500GB model delivering 545 MB/s reads and 525 MB/s writes, and read IOPS at 100K and write IOPS at 80K.

The biggest available capacity was 1TB, and the 500GB option cost £150 at launch. A couple of years later the Sandisk division has built them new 3D NAND TLC flash and incorporated it into a new WD Blue 3D NAND SSD.

Is this destined to be an ‘also ran’ SSD or an upgrade that’s worth considering alongside the likes of Samsung, Crucial, Corsair and Kingston?

UV400 or A400 and Crucial’s MX500, but much cheaper than Samsung’s 500GB 850 Evo. Western Digital also makes a SATA M.2 (not NVMe) version of this drive that usually costs a little more, though has identical performance and specs.

From purely a cost perspective, the WD Blue 3D NAND 500GB is aggressively priced, and much better value than the glut of cheap TLC drives with obscure branding.

If you’d like this drive with different branding, it is also sold as the Sandisk’s Ultra 3D SSD, though curiously it often costs more with that label on it.

Check out the best SSDs.

There isn’t much one can ascertain from the outer packaging of 2.5” SSDs, other than the certainty that what’s inside had zero impact on the external box they placed it.

Like almost every other SATA SSD, this one disguises itself as a 2.5” SATA hard drive and will work in the same situations on any modern operating system.

The packaging and labelling hint that Western Digital chose not to do any more than was necessary for a hardware device that goes inside a computer, often never to be seen again. As with much technology these days, all the interesting stuff is on the inside.

What the designers didn’t do was change the controller, as this SSD uses the Marvell 88SS1074 as before. This four channel controller sports low-density parity check (LDPC) technology for error- correcting, and can work with MLC, TLC and the 3D NAND TLC Flash used in this series.

Along with the controller, mounted on the internal board is a Micron made cache module and four BiCS (Bit-Cost Scaling) 3D TLC NAND in 128GB packages. If you open up a drive to see these, and that will involve damaging the rear label, then the little board inside occupies less than 40% of the available volume.

The packaging contains just the drive and a tiny warranty guide document, and those that need software tools must visit the Western Digital website. 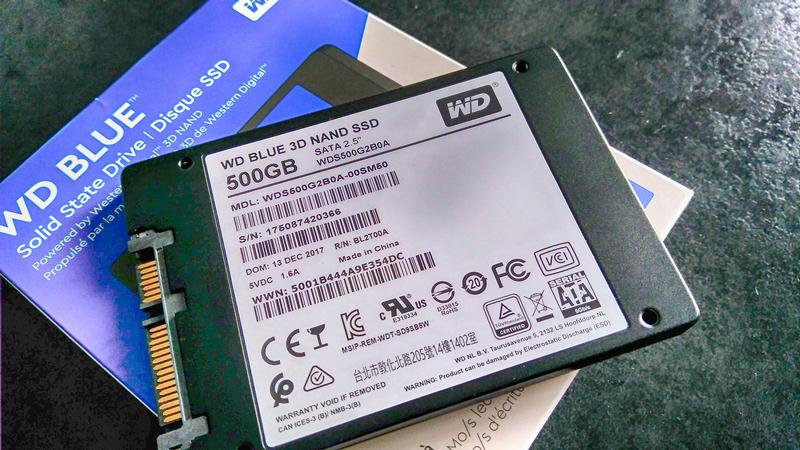 Here the WD SSD Dashboard can be downloaded, that monitors the drive and gives you other useful information, like the remaining lifespan. Alongside the SSD Dashboard, you can also find Acronis True Image WD Edition, a useful utility required for cloning an existing system on to the WD Blue.

These are all free and will work with all existing Western Digital SSD products.

Western Digital provides a three years warranty on all the WD Blue 3D NAND drives, and the TBW of the 500GB model is 200TB. The equivalent of writing a 50GB Blu-ray to the drive every single day for 12 years.

The only missing feature that some competitor devices offer is hardware encryption. A feature that they’ve decided to keep exclusively for their business orientated products.

There is a realistic speed limit for SATA connected storage, and most modern SSD designs approach or smack into that invisible barrier at about 560MB/s.

What’s interesting about this drive is that it not only delivers the quoted 560MB/s reads and 530MB/s writes, but exceeds those numbers slightly in our testing. Using CrystalDiskMark 6.0.0, we achieved 563.7 MB/s reads and 536.8 MB/s writes.

These are highly respectable numbers from any SATA connected drive, irrespective of brand.

The quoted IOPS are also bettered, with read IOPS being 97.4K, a snip above the 95K promised. That’s great, but the difference is so small that it wouldn’t be noticeable to most users.

What is more impressive is how this drive maintains its performance over the long haul, given that it uses the TLC memory model. We’ve seen plenty of drives recently that are good until their internal cache is saturated, at which point write performance declines to about half of what it was initially.

The 3D Blue 3D NAND isn’t immune from this effect, but write goes down to the 450MB/s level, and it delivers that number consistently even with very big (25GB+) sized file transfers. Because of this TLC issue most high-end branded drives (like the Crucial BX300) use MLC flash, as it can maintain the write performance without cache support.

Overall, this drive is better than Samsung’s 750 EVO, and in some tests better than their 850 EVO. If you want significantly better performance than this, you’ll need to consider a PCIe NVMe drive.

Because the WD Blue 3D NAND is wringing the last bits per second out of SATA III bandwidth, and even the very best SATA connected devices don’t go much faster.

One mild weakness is the TBW (Total Bytes Written) which is just 100TBW on the 250GB and 200TBW on 500GB model covered here.

Most users will never actually run into the TBW of their drives, but it is something worth consideringif you hammer your storage every day.