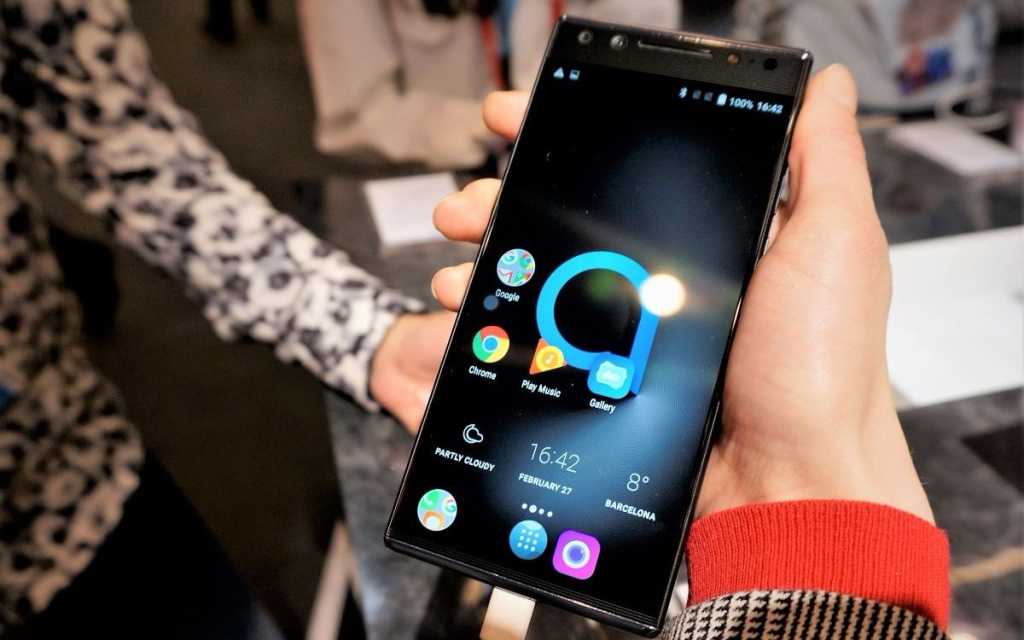 The Alcatel 5 is definitely an engaging smartphone. From our short experience with it, it appears that you get a lot – like real lot – for your money. We are not too fussed about the low storage space or average processor, or even top bezel as for the price you get a very good looking phone with some nice premium features.

“Go big or go home” seems to be Alcatel’s motto this year as it revealed no less than seven new budget friendly smartphones. The most premium of the bunch is called the Alcatel 5 and we had the opportunity to try it at MWC.

The Alcatel 5 is the most premium smartphone of the eponymous brand. While top-of-the-range normally means a price in excess of £600, this device only costs 229,99€ (around £202).

That’s almost in the budget range, and most certainly the bottom end of the mid-range. There’s no release date yet but Alcatel has certainly caught our attention.

The Alcatel 5 has a stunning design, especially for its price. The brand follows the bezel-less trend but with a slight twist. The screen goes right to the bottom and the sides of the phone, but there is actually a large space at the top.

Instead of trying to hide it, as most manufacturers would have, Alcatel actually draws attention to it, and it weirdly looks good. The phone is available in two colors, Metallic Black and Metallic Gold with very thin darker lateral stripes on the top bezel.

There you can notice two front cameras, so it’s not there for no reason. We’ve seen devices like the Xiaomi Mi Mix put the front camera below the screen, but this way means you don’t have to turn it round to take selfies.

The Alcatel 5 is thin (only 8.45mm), light (144gr) and it holds comfortably in the hand (15.23 x 7.1 cm). It doesn’t feel like a cheap phone at all. Its has a rectangular design with rounded corners that kind of reminded us of the Sony Xperia range.

Note that this model is not waterproof but that’s hardly surprising since a lot of more expensive are not.

Flagship phones tend to be larger and that’s the case here. It has a 5.7in HD IPS screen in the most popular format you can find right now, 18:9.  The display looks good, but of course you can find better if you ready to pay more.

It does have some good features for a cheap phone. For example, it might be more and more common to find fingerprint scanner on that category of smartphone but face recognition is still rare.

Alcatel calls it Face Key and it works like the most expensive Apple or Samsung devices.

Powerwise it uses a processor from MediaTek, the MT6750, which the brand says is made for the “super-mid market”. It also has a 3000mAh battery which means it should last all day without needing topping up.

The Alcatel 5 comes with 3GB RAM and 32GB of storage, which is not that much, but you can extend it up to 128GB with a microSD card.

At the back is a 12Mp camera but it’s the ones at the front which are more interesting. There are two and they are even higher resolution at 13- and 16Mp. More note worth is the ability to take wide angle selfies.

We tried its automatic 120 degree super wide-angle (it knows when there are too many people in the frame for the regular lens) and it worked very well for our group shot.

We were a bit surprised to see that the samples showed during MWC were running on Android 7.0 Nougat and not 8.0 Oreo and we don’t know which version it will run when its released in the UK.