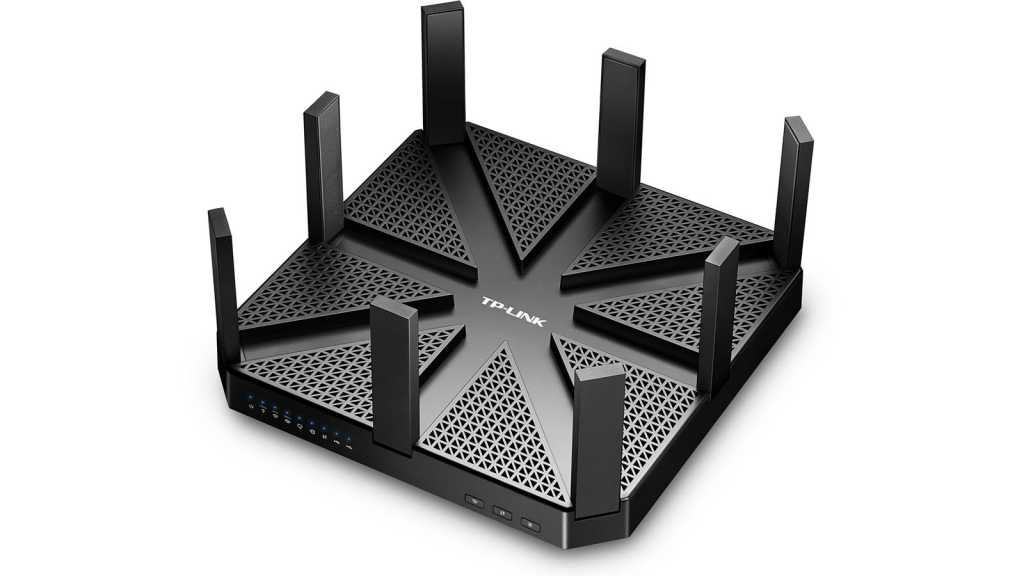 A very powerful router that packs almost all the networking functionality any home user might reasonably want. The C5400 Lilly is gilded with wired link aggregation and now IoT support. A monster wireless router that should handle what most users can throw at it with ease.

Normally we wouldn’t choose to review a router that launched more than 18 months ago, as the TP-Link Archer C5400 did.

However, what TP-Link launched then, and what you get in the box labelled ‘TP-Link Archer C5400 Wireless’ today, are two very different things.

At launch, the C5400 cost a whopping £350. The market for AC5300-class products was still evolving then, and there were only a handful of SOHO products with this level of hardware available. There aren’t many more now, to be fair.

We’ve chosen to review this router now partly because this device has recently become more affordable, but also because TP-Link revamped it to V2 status, adding a couple of features that some people will adore.

The products that compete directly as the Netgear R8500 and Asus RT-AC5300, these cost £ and £299 respectively The only real competition the C5400 has on price is the Linksys EA9500 MAX-STREAM, that has 8 LAN ports (with no link aggregation), and costs £229.99 currently.

If you’ve a feeling this design looks familiar, it is. It’s the same that TP-Link uses for its AD7200 router, reviewed. 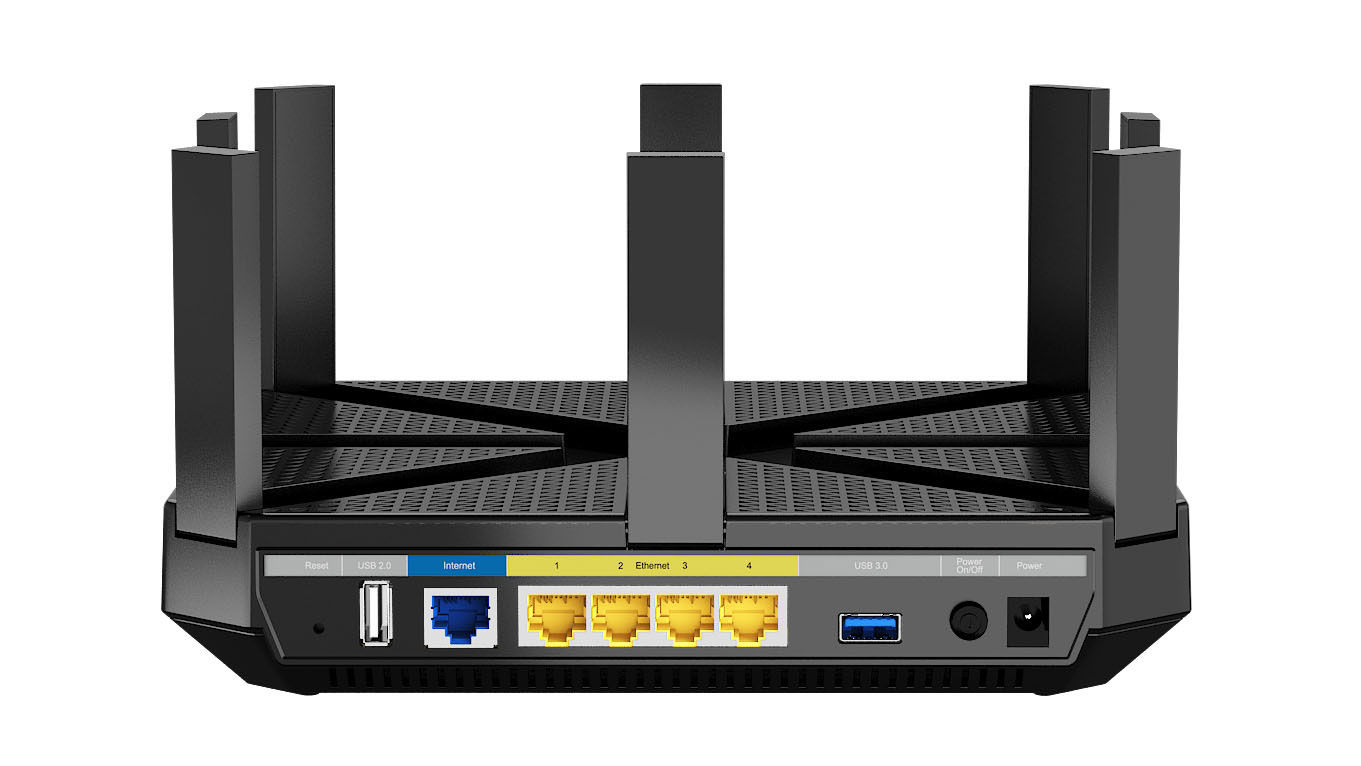 While 802.11ad routers are too specialist for most people, 802.11ac still has plenty of life left in it.

AC5300-level Wi-Fi performance requires more central processing power than most routers are blessed with. TP-Link fashioned the Archer C5400 with a dual-core 1.4GHz Broadcom ARM processor and no fewer than three co-processors to funnel data around its internal data pathways.

One co-processor is allocated to handle the 2.4GHz band, while the two 5GHz channels each get a co-processor to manage their data flows too.

That leaves the ARM SoC as the master controller, with plenty of cycles to handle USB ports, LAN ports and other tasks.

As we’ve mentioned in other reviews, the problem in supporting that amount of bandwidth is that the client hardware is usually linking to Ethernet-connected NAS servers, and gigabit Ethernet is less than half of 2167 Mb/s.

As with most good routers these days the C5400 offers SAMBA shares on its two USB ports, but this is one of the few where they can also be utilised for Print Serving. All this hardware was in the original V1 model of the C5400, but the V2 revamp also includes some new things that aren’t in the earlier design. 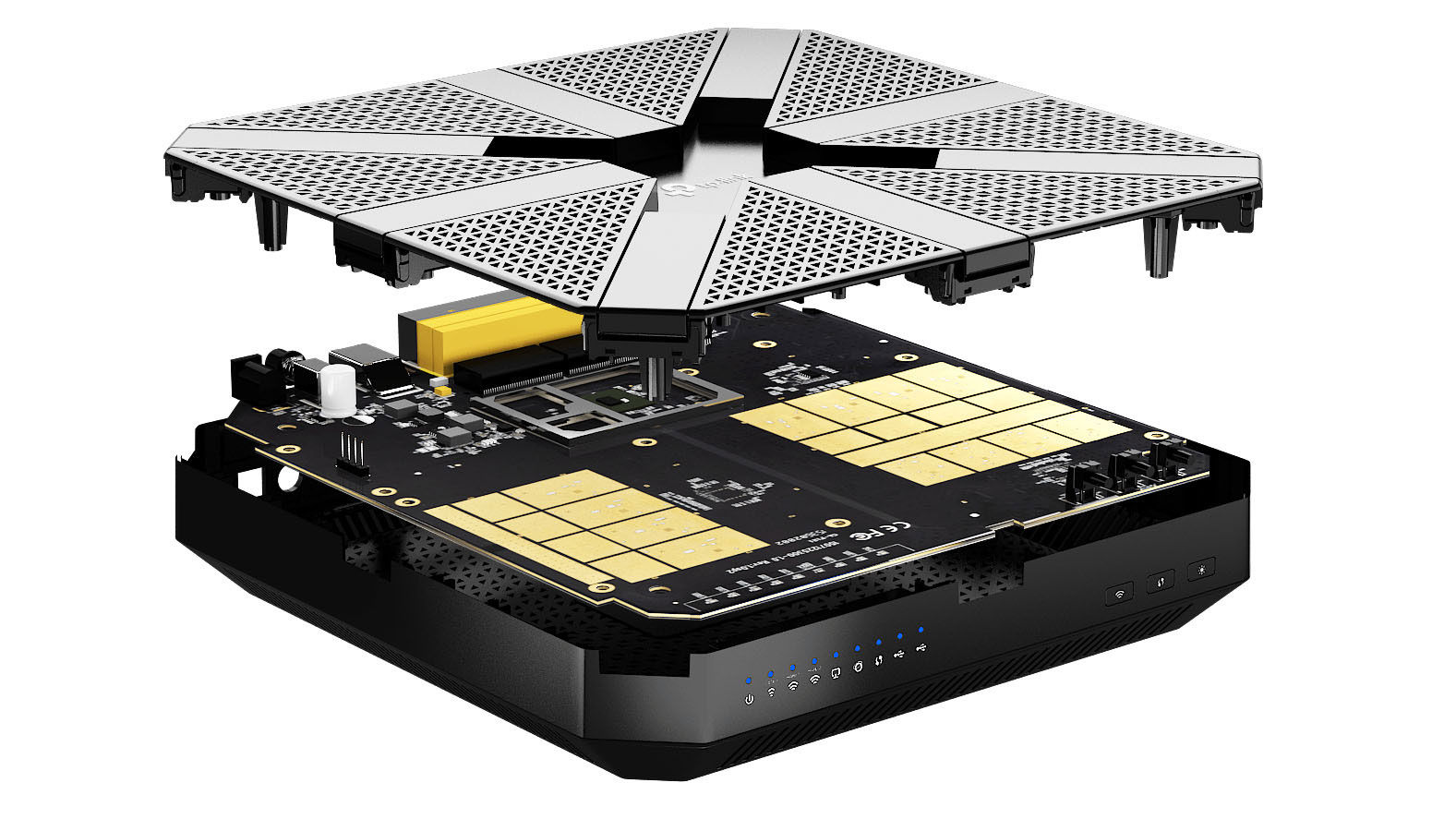 As a demonstration of how connected a world we’re living in, TP-Link added the ability to manage the C5400 using both IFTTT rules and using voice commands via Amazon Alexa devices.

The Alexa skill includes a range of commands that allow you to prioritise devices or services, activate WPS and guest mode, and even turn the LEDs off. Activating a guest network is achieved by saying “Alexa, tell TP-Link I have friends coming”, for example. A complete list of what it can do with Alexa is here.

What you can do with IFTTT is even more sophisticated, as there are some 25 different actions and triggers you can utilise, some that work in conjunction with other hardware, such as the Nest thermostat.

Depending on your point of view some of these triggers might appear clever or border on creepy, as the router can inform you precisely when a device connects or disconnects from the network.

But the advantage of this type of awareness is that it can intelligently control lighting, heating, etc. based on the presence of people, or specifically their devices.

How much use this is to each customer will depend on how automated they like their life and home, and how technically astute they are.

But if you do use Alexa, Nest, Philips Hue lights or IFTTT in general, then TP-Link has supported their integration with the Wi-Fi and broadband.

The superb wireless performance of the C5400 V1 is well documented, and the V2 model doesn’t enhance that technology in any significant way.

In short, this is one of the fastest routers available. Channel bonded to a high-performance NAS box and connected via 5GHz at short range it is possible to see more than 100MB/s download speeds over WiFi. That said, if you are communicating with another 802.11ac device using the second 5GHz channel, then you should be able to achieve a combined throughput that’s even greater.

The only catch to achieving these numbers is that it requires the latest 802.11ac MU-MIMO adapters, and computers powerful enough to drive that much data from their internal SSDs.

Most users won’t see these speeds, but they will notice that irrespective of what other users are doing with their connection the WiFi performance levels are maintained even with 10 or more connected.

The headline bandwidth numbers in this device aren’t the whole story, its how easily that potential can be segmented between many connected users without starving any of them. An Ultra HD stream needs about 13 Mbps, and the C5400 could easily support tens of them without a problem. The bottleneck is much more likely to be the NAS box or broadband connection, and not WiFi in this context.

USB speed on the USB 3.0 port is better than most routers offering a SAMBA share, though still not anywhere near that ports full potential. The best scores were around 70MB/s, for both reads and writes, using a Lexar portable SSD as the source.

One downside is that the C5400 does use more power than most SoHo routers. Typically when streaming it consumes around 12 watts, roughly double the amount that most AC2600 class routers need. As means to reduce overall power consumption, you can reduce the transmission power on each of the frequency ranges and also schedule when the router sleeps.

Some router interfaces are scant and offer control pages with one toggle on them, not the C5400. In an attempt to boil down the controls, TP-Link broke down the control features into a ‘Basic’ set and a more extensive ‘Advanced’ selection.

Ironically, the Basic structure has more controls than some routers have in their entirety, and you only need to delve into Advanced if you wish to set up a VPN (OpenVPN), create NAT forwarding, use IPv6 or define QoS settings. 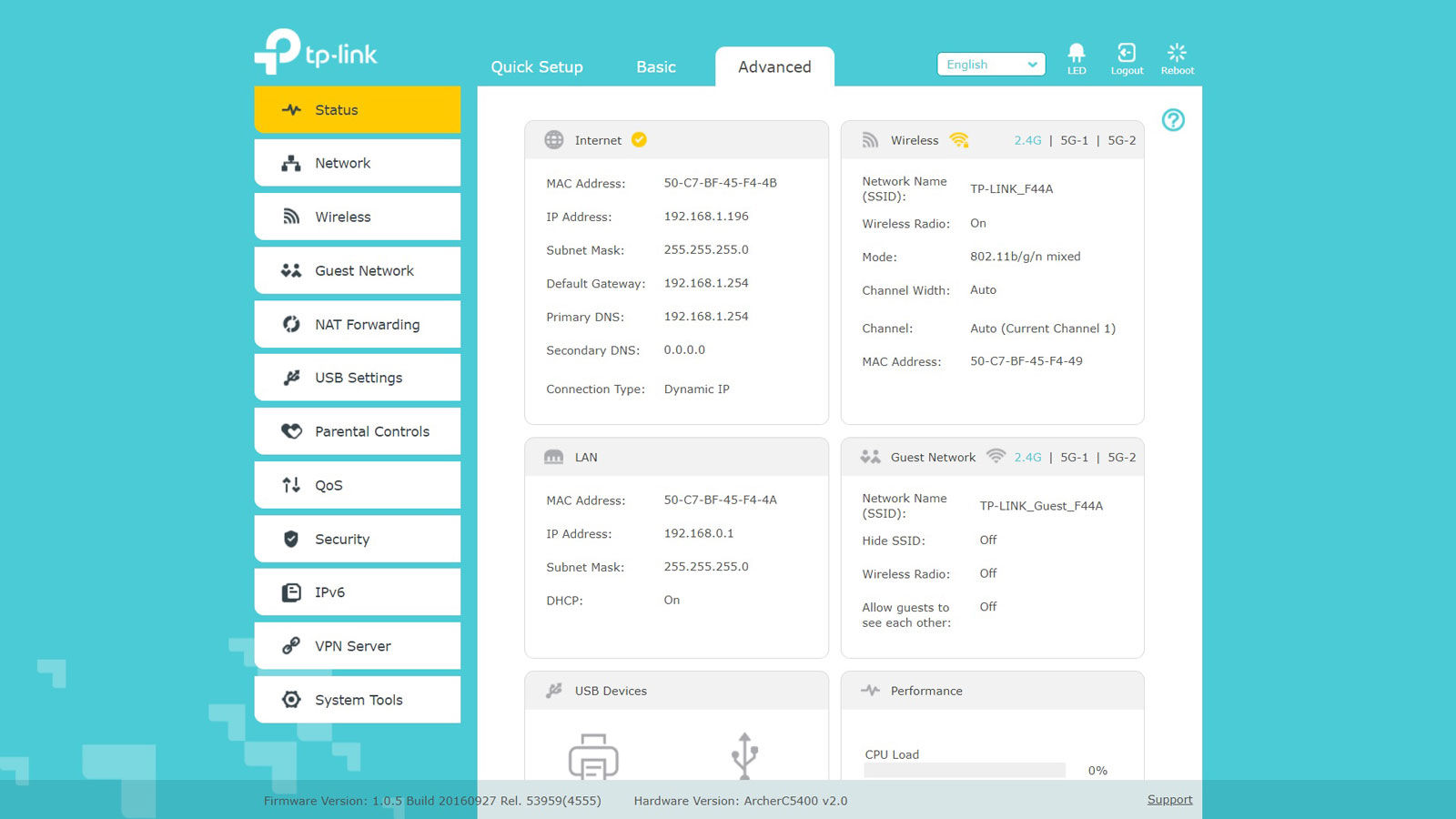 Some menu items are in both camps, like Parental controls, and the Advanced pages do include extra abilities, such as being about to create content blacklists/whitelists.

The web interface is rather retro in appearance, but there aren’t many branded routers with this degree of control over wireless and wired connections, or that can gather so many statistics about operational performance.

It might look dated, but the interface is easy to navigate and chocked with functionality.