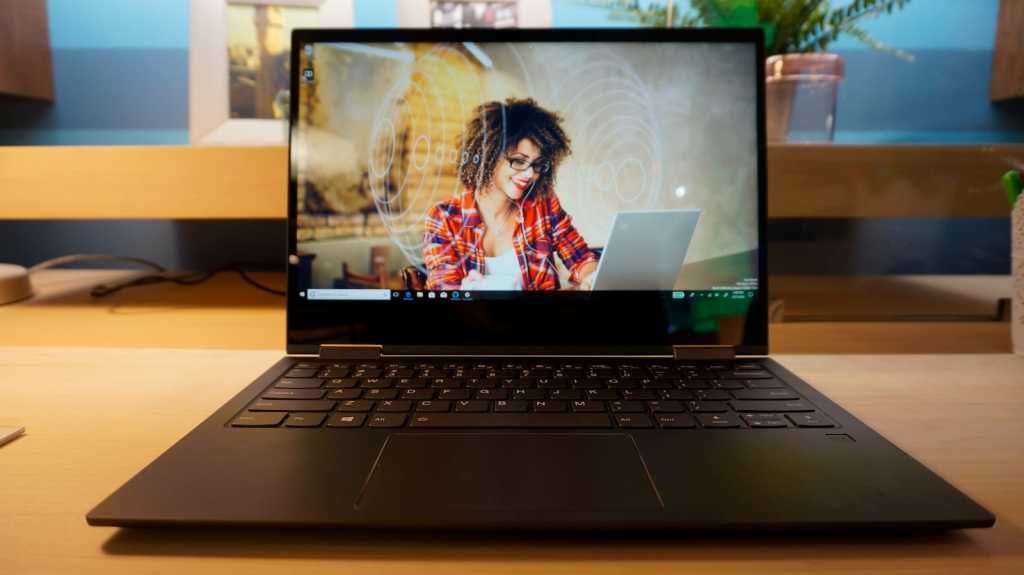 This is a solid incremental update to the Yoga line that takes what was already pretty great – the design, build quality, and top tier spec options – and adds the latest Intel chips and Alexa support. We’ll be looking forward to testing it out more thoroughly for a full review soon.

We went hands-on with both of the new models at the show in Barcelona to see how they shape up. Stay here to read our thoughts on the Yoga 730, or head over to our Yoga 530 review for more on the cheaper model.

Lenovo is offering the Yoga 730 in two sizes: 13in and 15in, and naturally the price varies between them, starting from $879 and $899 respectively. That’s just for the base models though, and prices will climb as you start to tweak the specs. We don’t have UK prices yet.

As for the release date, Lenovo is expecting to begin selling the 730 models some time in April, but there’s no exact date yet.

The Yoga 730 is an iterative update to last year’s Yoga 720, and it will immediately look familiar to anyone who ever used that version.

There’s a familiar 360-degree hinge design, and a brushed metal finish across the laptop, which is available in Platinum, Iron Grey, or Copper (only for the 13in model).

There’s a fairly premium feel to the whole machine, which extends to the bright, vibrant IPS display. It’s fairly glossy and reflective – though that might just have been down to MWC’s aggressive show lights – and there’s some serious bezelling going on, but this is an undeniably attractive piece of kit.

As with other Yoga models, the hinge means that you can use the 730 either as a laptop or flipped round as a tablet, along with just about any orientation in between, as long as you can find a way to make it stand up.

With the smaller model starting from 1.12kg, it’s a fairly friendly weight for portable use, but the 15in version clocks in at a heftier 1.89kg – don’t expect to use this thing one-handed, even in tablet mode.

In laptop mode, the keyboard is comfortable to use – it’s not the best around, but there’s a nice travel to the keys and they’re not too clicky. The trackpad is also large, and fairly responsive. There’s also a fingerprint sensor just below the keyboard, which can be used to sign in and make secure Paypal payments.

As for ports, they vary between the machines. On the 13in model you get two USB-C Thunderbolt port and one USB-A 3.0, but the larger model instead offers two USB-A ports and one USB-C for some reason, in addition to HDMI and a separate charger port. Both feature an audio jack. The USB-A inclusion is welcome, though it’s a shame that the 730 line doesn’t include the 4-in-1 card reader slot found on the cheaper Yoga 530 model.

The headline feature of the Yoga 730 is the smart assistant support, with Lenovo baking in not only Microsoft’s Cortana, but also Amazon’s Alexa – a smart attempt to attract anyone who already has an Echo device or two in their home.

To make the smart assistants work, Lenovo has built in four far-field microphones so that you’ll be able to talk to your choice of Alexa or Cortana from across the room, just like with a standard smart speaker.

In our testing the laptop did a good job of picking up our voice, and the built-in Alexa app lets you access all the usual Alexa commands and skills. Check out our full guide to how to use Alexa for more on what you can do with the virtual assistant.

How much you need a virtual assistant in your laptop is an open question, but for anybody who already has an Echo, having an extra Alexa device around could be a good reason to prefer the Yoga 730 over some of its rivals.

Beyond that, the spec options offer a fair amount of variance in power – and presumably price. We don’t know the base processor, but you can go up to the latest 8th gen Intel Core i7. The rest of the specs vary depending on the size you opt for.

If you opt for the larger laptop you get either 8GB or 16GB of RAM, and the SSD options start from 256GB and go up to 1TB. You also get the choice of adding in an Nvidia GeForce GTX 1050 graphics card.

The IPS touchscreen is available in either HD or 4K, and works with Lenovo’s Active Pen 2 – bundled with the laptop in most markets but sold separately in North America – meaning that a high spec model could be a very good contender for anyone looking for a convertible laptop for creative work, while even a more budget-friendly setup could suit anyone who just wants to be able to doodle.

Audio should also be strong, though we haven’t been able to test it properly. But built-in JBL speakers and Dolby Atmos support for headphones suggest the Yoga 730 should sound pretty great.

Meanwhile Lenovo claims you should be able to expect up to 13 hours of battery with the HD display, and 11 hours for the 4K model – though naturally that will vary with other specs adn settings.

As for software, Windows 10 Home comes as standard, with the option to upgrade to the Pro version.