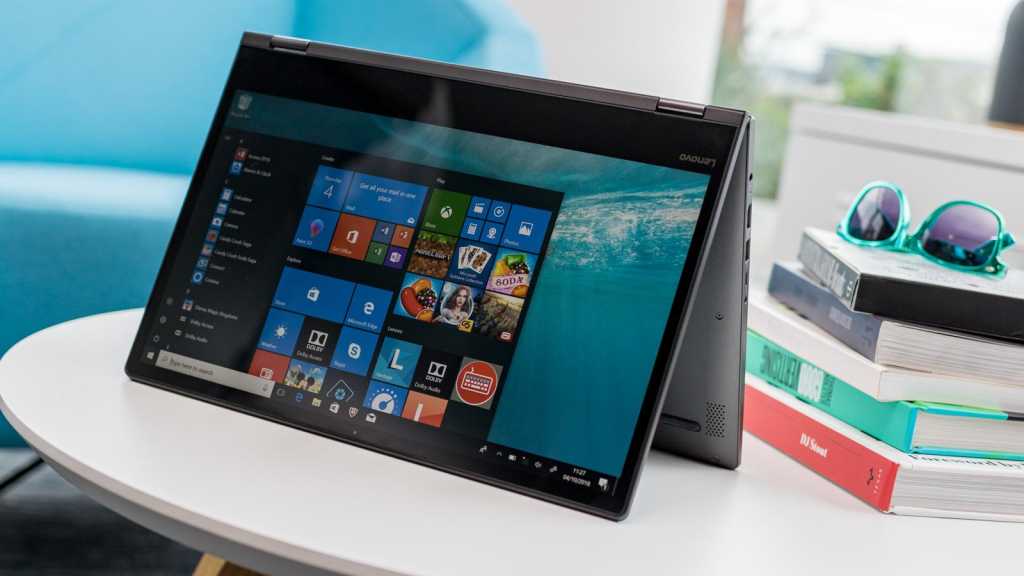 Lenovo’s Yoga 530 is a solid option if you’re looking for a 2-in-1 convertible laptop. But this really comes down to what model you buy. We’ve tested the AMD Ryzen 7 model which is a bit pricey considering elements like the screen and battery life. So the Core i3 or i5 might make for a more balanced purchase if you’re not looking to game.

Lenovo Yoga laptops are some of the most “famous” convertibles around. They feel more like normal laptops than a Microsoft Surface, but still have hybrid chops for when only touch-led operation will do.

Our test Yoga 530 further develops this kind of flexibility with a Ryzen CPU that offers significantly better gaming performance than an Intel Core-based alternative.

However a few elements of the Yoga 530 are only passable, including display quality and battery life.

You can buy the Yoga 530 from Lenovo or Currys PC World. All models come with a one-year “carry in” warranty.

There are now many models in the Yoga series. The Yoga 530 drops some of design gloss of the most expensive picks, like the Yoga C930, without compromising too much on performance.

Its shell is mostly plastic, but a sheet of brushed metal sits around the keyboard. You get the feel of aluminum while typing, and the use of plastic elsewhere helps keep the price down.

For a convertible, the Lenovo Yoga 530’s portability is not hugely impressive, though. It weighs 1.6kg, a few hundred grams more than some of the competition, and is 17.6mm thick. It’s not super-thin or super-light.

The flip-over style doesn’t help any of this, of course. Like other Yogas, you can fold over the Lenovo Yoga 530’s screen so back of the display meets bottom plate.

This arrangement can be handy for home use, letting you fold the screen away from you without taking up much room. However, unless you work on a totally flat, solid surface the screen wobbles quite a bit. Folding it most of the way into ‘display mode’ is handy when you’re tight on space like on a train or plane.

Despite the added lifestyle angle, the Lenovo Yoga 530’s design is fairly plain. The brushed aluminum of the keyboard surround is clearly bordered by plastic, and the melange of matt and half-shiny greys used throughout does not come across as refined as intended.

There’s also some minor flex to the keyboard, primarily right in the centre.

The Yoga 930 looks and feels fine, but does not impress when viewed as a “£999” laptop, the RRP of this Ryzen edition. As the shell for the £449 Intel Pentium version it’s great, though. This is the issue when the same shell caters for buyers with completely different budgets.

Laptop traditionalists often love Lenovo laptops for their deep, chunky keyboards. The Lenovo Yoga 530 doesn’t have one of these ThinkPad style boards, but something rather more standard.

It’s a shallower design, with fairly quiet typing action and a reasonable amount of travel for a portable laptop. Typing has a somewhat soft feel, with a bit of give to the bottom end of the action. It’s not crisp and clicky, but key action has a good weight to it.

Key shape is the most recognisable part here. Like other Lenovos the Yoga 530’s keys have curved bottoms, a signature look.

There’s a two-level backlight for night typing too. This is a serviceable keyboard. There’s nothing too special here, but you get a perfectly solid typing experience.

The trackpad is, similarly, fine. It’s a plastic pad, so does not have the smoothness of glass, but the size is fine and so is the clicker action.

A fingerprint scanner also sits below the right side of the keyboard. It’s a tiny, well-recessed pad that, like the best, doesn’t get in the way. Pads integrated into special keyboard buttons come across slicker, but it’s just another reminder the Yoga 530 is a mid-range design, not a high-end one.

Like many other Windows Hello fingerprint pads, it tends to fail to recognise your finder far more often than recents phones with a similar pad.

The Lenovo Yoga 530 has a 14in 1920×1080 pixel LCD screen. It’s the display type and resolution almost all laptops around the price offer.

However, this one is below the best in a couple of important respects. Maximum brightness is just 276cd/m, too low to be ideal for outdoors use when the screen has a glossy finish. You’ll want to use 60-70 percent brightness even when working in an office.

Colour performance is not great either. It covers just 56.9 percent of the sRGB colour standard, undeniably low. For a laptop this price, you’d like to see it hit at least 75 percent, if not more.

Given this limited colour depth, though, the Yoga 530 does not look too bad. It may not be able to recreate the deepest, richest tones but does not have the weak character that would result if it also had poor contrast.

Borders are not particularly slim either. The areas above and to the side of the display are a little thicker than the most aggressive mid-range laptops, and there’s a big blank expanse below. You’ll get used to this look very quickly, but it demonstrates the Yoga 530’s screen is significantly smaller than the overall footprint.

As a convertible, the Yoga 530 also has a touchscreen, and a glossy, glass-topped finish. It supports Lenovo’s Active Pen styluses too, although you do not get one in the box. Higher-end Yogas tend to come with a pen as standard.

There are all sorts of Yoga 530 variants. You can get laptops with Intel Core processors, ones with Intel Pentium CPUs and, most interesting of all, this one.

Our Yoga 530 has an AMD Ryzen 7 2700U processor, an alternative to the much more popular Intel Core i7-8550U. Intel wins on the CPU side for power, but AMD’s Ryzen is far better for gaming.

It scores 6328 in 3D Mark’s Sky Diver test, compared to 3900-odd from a laptop with a Core i7 CPU. This means you can play games like Fortnite at 1080p without hugely cut-down visuals and still get fairly smooth frame rates. You can even play titles like The Witcher 3 with the graphics set to “low”.

You get roughly the same gaming power as an Intel laptop with an Nvidia GeForce 940MX card. However, the Vega 10 GPU is still beaten by the newer GeForce MX150, seen in some laptops of a similar size. That said, arch rival HP has also switched to using Ryzen chipsets as an alternative to partnering an Intel processor with an Nvidia GPU in the Envy x360 line.

In PC Mark 10 the Yoga 530 scores 3159 points. This is around 20% less than the Dell XPS 13 with a Core i7 CPU. However, the Yoga 530 can still handle tough applications like video and photo editors. And being able to play some reasonably recent games acceptably well makes this laptop better for some downtime fun.

When simply writing documents or using a browser, the Yoga 530 is completely silent. No need for fans. They kick in when you play a game, of course, but when combined with the quiet keyboard keys, this laptop is well-suited to very quiet work environments. The fan is also unusually quiet when running too.

Consistent with its status as a mid-range laptop, Lenovo has not removed all traditional connections from the Yoga 530 in favour of USB-C shaped ones. You get just a single USB-C, and it’s a standard USB 3.0 connector, not something more advanced like a Thunderbolt 3.

The Yoga 530 also has two USB 3.0 ports, a full-size HDMI, full-size SD card slot, headphone jack and security slot. Some might call this array basic, but for many it covers everyday needs much better than a series of Thunderbolt connections. No adapters required.

The battery lets the Yoga 530 down a little, though. Lenovo has not released battery watt-hour specs (other Yoga 530 models have a 45Wh, this one likely does too), but does claim it should last eight hours off charge, based on the MobileMark 2014 test.

Real-world results aren’t quite as good, and eight hours is already around the minimum we’d like to see from a portable laptop like this. Playing a 720p video on loop at 120cd/m brightness, the Yoga 530 lasts just four hours 56 minutes.

However, with the drivers available at the time of review the Yoga 530’s video playback is a little choppy, making us wonder if this stamina will improve after an update. For a second test, we monitored the laptop’s battery level through a normal work day. This involved writing documents, and some light web research.

The Yoga 530 still only lasts around six hours with these light tasks. It just can’t handle a full day’s work, and that’s a big problem for many.

You do get “rapid” charging, though. Lenovo says you’ll get two hours of use from a 15 minute charge.

The Yoga 530 is a solid convertible laptop. Its £999 recommended price is a little ambitious when parts of the build are pedestrian, but you can already find it cheaper online. And the lower-end Intel Pentium version sounds a good buy for those out to spend less than £500.

It is held back by a few obvious shortcomings, though. Display brightness and colour saturation are below average at this level, and battery life is too short to last a full day.

The HP Envy x360 may be a better bet for some. Its smaller size and lower weight make it easier to carry around too. However, it is not a battery life king either.