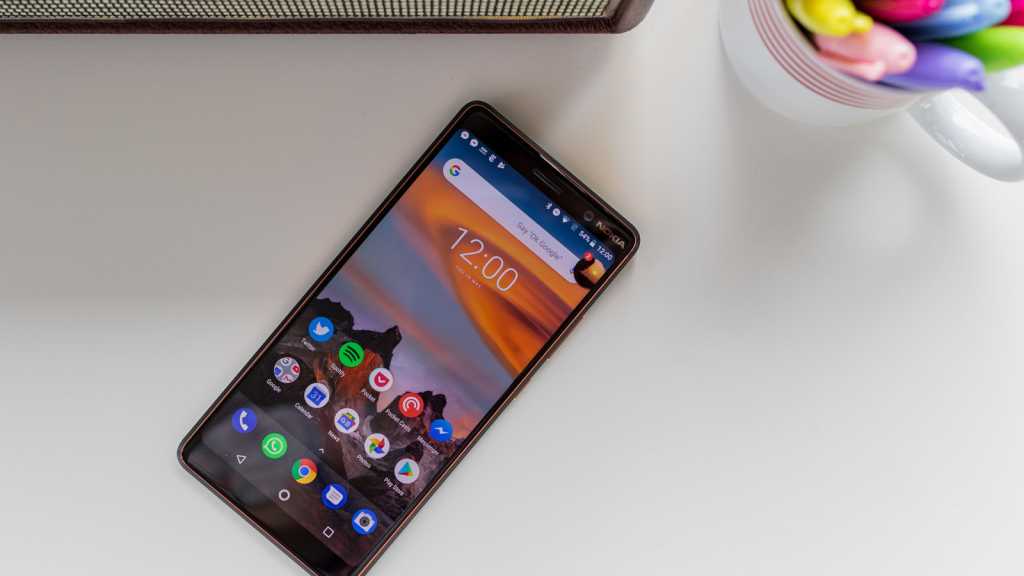 The Nokia 7 Plus is one of the better mid-range phones on the market and has one of the best cameras on a device of its price. The design is close to premium in feel and the display is top notch (without an actual notch). But stutters in everyday use hamper our opinion of it. It can cope with high end gaming and multitasking but occasionally lagged to the point we had to restart it. This could be improved with software updates, but it’s a black mark against a phone that we have no hesitation in recommending otherwise.

Nokia is unquestionably back as a brand, even if it’s Finnish company HMD that’s actually making the phones under license. The Nokia 7 Plus (there is no regular Nokia 7) looks like a copper-flecked Google Pixel 2 XL, but it doesn’t quite perform like one.

An Android One device that presents Android as practically stock, it is in many ways the best route to Pixel-like software without splashing out double its price for a Pixel 2.

While it performs well in high-intensity games, it has an odd tendency to lag when completing basic tasks. Even with its mid-range specs, in everyday use It doesn’t perform as well as other, cheaper phones.

Can this be overlooked if you love the design and price? Let’s see.

Nokia 7 Plus price and availability

The Nokia 7 Plus retails for £349.99 in the UK from Carphone Warehouse. It’s also sold at Amazon, John Lewis, Argos and on contract from EE and Carphone.

The Sony Xperia XA2’s RRP is £299 but has a less powerful processor than the Nokia.

Nokia 7 Plus design and build

The phone is a shade below truly premium in build quality, but it’s not far off and impressive for the price. The black matte plastic back gives it away, but it’s solid. The phone is also quite heavy at 183g but this adds to the premium feel.

From the front, the phone looks a little like the Pixel 2 XL thanks to the similar sized 6in 18:9 screen and shape of the top and bottom bezels. But the 7 Plus has a copper coloured metal finish that makes it stand out. There’s a thing rim between the edges of the screen and the black casing as well as a thicker rim that runs all around the bumper of the phone.

On top there’s a headphone jack, and the phone is fast charged via USB-C. There’s a front facing camera and dual rear cameras housed in a camera bump. The fingerprint sensor just underneath that bump is not the fastest out there but accurate and reactive. You can also use it to pull down the notification shade, a handy feature that is frustratingly absent from some other phones.

The sensor and camera are also highlighted in the same copper finish in a thoughtful design twist. The black plastic back and metal rim all but hide the antennae lines on the phone and give it a sleek, modern look. Nokia logos on the top front and on the back are also subtle enough.

That back does show some fingerprint smudges, but nowhere nearly as bad as glass phones, while the oleophobic coating on the display is excellent. If you’re taken by the design of the Nokia 7 Plus, that price looks harder to resist.

It’s also available with in a white colour that is harder to track down, particularly at UK retailers.

Nokia 7 Plus features and specs

But that price means there are some compromises – though not in all areas.

The Pixel 2 XL shaped display isn’t bad either, though it’s an LCD compared to Google’s OLED. It has a 2160×1080 resolution with 403 pixels per inch. Colours are a tad on the washed-out side but are truer to life than the saturation many more expensive phones apply to their default settings.

Games and video look very good on the display, and the Full HD+ resolution means Netflix sessions aren’t out of the question. The screen curves gently at each of its four corners too, a design choice many phones have this year.

Another giveaway of the phones price is the use of Gorilla Glass 3. A tough glass, yes, but not as strong or scratch-proof as the Gorilla Glass 5 now standard in the high-end. But in terms of output, this is one of the best mid-range phone displays going.

Alongside the mid-range 660 processor is 4GB RAM and 64GB of storage, expandable via micro SD up to 256GB. There’s only one nano-SIM slot.

Powered by the Adreno 512 GPU, the Nokia 7 Plus coped brilliantly with games like Asphalt 8 when pushed to its limits. But during supposedly less intensive operations like app switching, or even loading Twitter, the phone mysteriously lagged.

The use of overlay in Chat Heads for Facebook Messenger also played havoc with the 7 Plus, with screens ghosting and lagging to the point where we had to restart the phone a couple of times.

While it didn’t happen every day during our two-week testing, it occurred enough to leave us concerned for the longevity of the device as it has to cope with newer, more demanding apps. We saw a more pleasingly consistent level of performance in the £169 Moto G6 Play.

We synthetically benchmarked the Nokia 7 Plus against three comparable phones: the Nokia 8 (as it’s available for the same price or cheaper now), the Honor 10 (as it’s only £50 more) and the Sony Xperia XA2 (as a comparable mid-range priced device).

The Nokia 7 Plus more than holds its own in terms of pure power (see Geekbench score) and shows you that last year’s high-end Snapdragon 835 doesn’t give you much more than the 660. Results are also decent in the frame rate tests of the GFXBench results and the Jetstream browser test.

But we still can’t shake the problems we found in everyday use.

The camera set up on the Nokia 7 Plus is one of the best things about the phone. For £349, the quality of the dual rear set up is brilliant, and the results are above average with pleasingly little interference from software quirks (like oversaturation on the Honor 10).

The Nokia use of Carl Zeiss optics is pleasing here. There’s a 12Mp main sensor with f/1.8 coupled with a 16Mp f/2.6 telephoto lens to achieve 2x zoom.

Take a look at the below photos by scrolling to the right:

Landscapes appear well balanced with good colour and a decent sense of white balance in bright skies, though you’ll want to tap to focus a bit more than usual. There’s also a surprisingly clean and useful Pro mode for adjusting balance and manually focussing before you snap.

A live bokeh mode also lets you take (hooray) portrait mode photos of people, pets and whatever you want to put in front of a blurred background. For the most part it works, and we can let it off its faults thanks to the handy fact the phone costs £349, not £849.

While the photos lack some of the detail of higher end devices (and you may well prefer how some phones saturate the photos), the Nokia 7 Plus has one of the best cameras on a phone of this price.

The 16Mp front facing lens is also pleasingly free of the weird beauty modes that some mid-range phones from Huawei and Honor plaster all over them – all you get is crisp, sharp images great for selfies or video calling.

And yes, the phone still allows the dual photos the Nokia 8 championed. This time, Nokia wisely avoids the non-hype of the word ‘bothie’ (like a selfie but both you and the person you’re pointing the rear camera at are in it) and we happily ignored the feature.

The single downfacing speaker next to the charging port is excellent. It’s better than the tinny nonsense on the £469 OnePlus 6 and loud and balanced enough for radio and podcasts – even music doesn’t sound horrific, but you’ll want a Bluetooth speaker for that party.

Connectivity is strong and it’s excellent that the Nokia 7 Plus has Bluetooth 5.0. Connection to speakers and headphones was flawless, but it does lack the popular aptX codec for superior wireless sound quality.

Don’t forget the headphone jack though, and there’s even some half decent in-ear headphones in the box that we happily used even though they are nothing special. We’re just pleased to see headphones included at all these days.

The marketing for the Nokia 7 Plus would have you believe it has two-day battery life. This is unfortunately an overstatement – at least in our usage of the 3,800mAh battery.

If the company is expecting people not to be hammering the device then yes, it may not die for two days. But when it also markets the dual cameras as a tool for photographers and creators, it is going to be heavily used.

In our regular use of the phone as our main device, it comfortably got us to the end of a whole day on around 30%. This is indeed above average, but that 30% wouldn’t then last us into the following day.

Streaming music, taking photos, checking email, lots of push notifications and a few phone calls (of decent audio quality, by the way) are par for the course in modern smartphones and the Nokia 7 Plus will last longer than the higher-end Samsung Galaxy S9, but not as long as it’s have you believe.

Nokia claims 50% charge in 30 minutes, which is accurate though thanks to the included fast charger. And, you guessed it – there’s no waterproofing or wireless charging.

For good measure, we ran the Geekbench 4 battery test on the phone, and it lasted for 6:46 with the screen on.

The Nokia 7 Plus is an Android One phone, which means it runs a clean, almost stock Android. One phones are also promised regular security updates and two years of software updates from release – so the Nokia 7 Plus should (technically) get Android Q in 2019.

The phone ships on Oreo 8.0 but received the 8.1 upgrade while we were testing. There’s also free unlimited high-quality Google Photos storage, a benefit until now reserved for Pixel owners.

Close to stock Android is a great experience, with a simple look and feel and no duplicated apps as it relies on Google apps. This is a sensible decision by HMD for this Nokia phone as, fingers crossed, it’ll stay supported for longer than it might otherwise and is a good way into clean Android for those who can’t afford a Pixel.