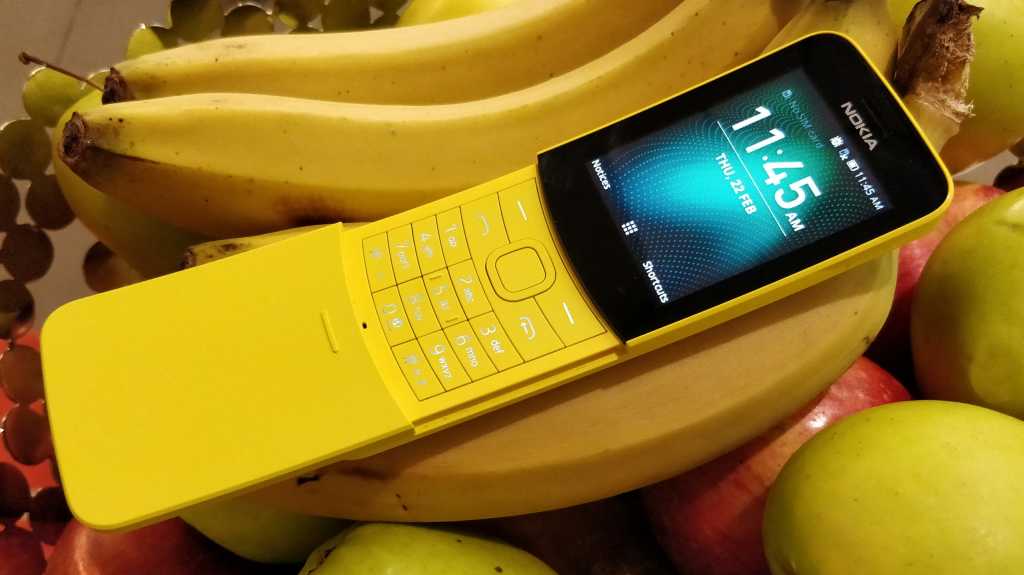 It’s true that smartphones aren’t much more expensive, even the new Nokia 1, but that doesn’t stop the new 8110 4G from being an alluring phone. It’s different and fun while offering some modern features like voice calls over LTE and Wi-Fi hotspot. Of course, the device isn’t going to set the market on fire but it’s still nice to a continuation of this original series. Long time Nokia fans will be tempted out of notstalgia, while others might legitimately find this a useful phone for festivals or for those who find a smartphone too overwhelming.

MWC might usually be about  smartphones and other high-end gadgets but a feature phone has caused quite a big of hype. HMD has re-launched the Nokia phone seen in The Matrix. Here we go hands-on with the Nokia 8110 4G.

Let’s face it, sometimes old things are cooler than new one and although the Nokia 8110 4G is technically a new phone, it’s another example of the firm bringing back a classic. (And now the Nokia 2720 Flip is back too.)

Following the Nokia 3310, this is the second ‘retro classic reloaded’ and although it’s been 22 years, the Nokia 8110 is back.

Although Nokia’s other new phones, like the 8 Sirocco and New Nokia 6, arrived in April, the 8110 4G was a late comer.

It costs £49 from Carphone Warehouse with a £10 top-up. You can also order it from Amazon.

So it’s very  cheap phone, like the 3310, and will make a decent option for those looking for a feature phone in situations like festivals or perhaps for an elderly user.

In a similar vain to the Nokia 3310, the new Nokia 8110 is similar in design to the original, yet tweaked so it’s also quite different. And yes, this is the phone used by Neo in the first Matrix movie!

Gone is the original stumpy antenna sticking out the top, as you would imagine, and the buttons are a new design also. They’re much flatter and all very close together where the original had separate keys. There’s now a D-pad instead of the up and down buttons from before.

The 8110 4G is still curved in shape and fits around your head very well. After all, this phone is designed for calls unlike smartphones. Of course, the curved banana shape means that it doesn’t sit nicely on a desk or in your pocket but you can spin it round helicopter style for enjoyment.

Also true to the original is the slide out cover that hides the buttons when shut. It’s got a smooth and quite satisfying action so you’ll no doubt find your self opening and closing it over and over again just for fun.

It’s not just for protection either, as you can legitimately use the cover to answer and end phone calls. Does it get more hipster than that?

A banana phone wouldn’t be a proper banana phone without coming in the aptly named Banana Yellow. As you can see it’s not the kind of handset you’re going to lose easily, but does also come in Traditional Black if you want that Matrix style.

One of the biggest and obvious differences between this 4G 8110 and the original is the more modern screen. It’s a bit bigger at 2.4in and offers colour instead of monochrome.

It’s curved and isn’t touchscreen but has a reasonable QVGA resolution (240×320). There’s no IPS technology at this price so TN is understandable but means not the best viewing angles.

In terms of the slightly boring specs, the new 8110 4G runs on a Qualcomm Snapdragon 205 – that’s a 1.1GHz dual-core that’s got plenty of power to run Snake.

The phone also has 512MB of RAM, 4GB of storage and some basic things like Wi-Fi, Bluetooth 4.1, GPS and a microUSB port.

In terms of modern features, the standout is 4G support and the ability to use the 8110 for VoLTE – or voice over LTE calls. You can also share that data connection via a Wi-Fi hotspot so the 8110 could be a good phone to use as a secondary device.

Yes, there’s a camera but it’s a pretty dismal 2Mp so don’t expect anything every remotely putting on Instragram unless you want a really retro look.

Although the battery is 1500mAh – pretty small for 2018 smartphones – this is a feature phone so doesn’t guzzle power in the same way. In fact, Nokia says it will last a whopping 25 days on standby.

In usage you’ll get over nine hours of VoLTE calls, six hours of video playback (not that you would) and 48 hours of mp3 playback.

There’s no Google Play store here so you can’t just download all the apps you’d normally use on your Android smartphone but the 8110 does have an app store in the Smart Feature OS which includes the likes of Facebook, Twitter, Google Maps and Google Assistant.

It wouldn’t be a reimagined classing without Snake so that’s pre-loaded.