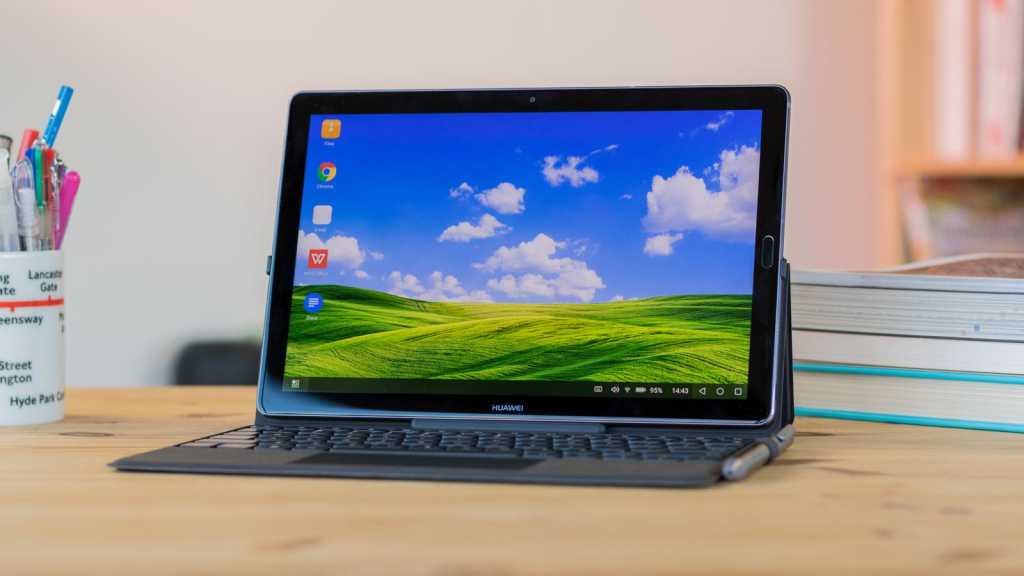 The MediaPad M5 Pro looks fantastic and performs fairly well, but it’s let down by small details like the shoddy official keyboard and Android’s limited productivity options. Still, it’s cheaper than most of its comparable rivals, and will keep most users happy.

Despite growing popularity for its phones, Huawei has yet to carve out a name for itself in the tablet world. Its MediaPad range has been around for a long while, though, and three new models under the MediaPad M5 moniker were launched at MWC 2018.

Two of those have a 10.8in screen and are essentially identical aside from the fact that the Pro version comes with a stylus – the M-Pen – in the box.

We’ve had a couple of weeks to test out the 10.8in MediaPad M5 Pro, and here’s what we think – though remember that much of it will apply to the regular 10.8in M5 as well. We’ve also reviewed the smaller 8.4in MediaPad M5, so take a look at that if you’re not sure which size you prefer.

Here’s the breakdown of prices (in Euros) for the MediaPad M5 10.8 Pro, which is all Huawei has announced so far. With that in mind we’ve scored our review based on the European pricing, but may change it if the UK and US pricing proves very different.

Those prices put the Pro model a good chunk cheaper than its closest rival, the 10.6in Samsung Galaxy Book, but with that tablet already available for much less than its launch price, the comparison is a bit closer. Still, it’s way below the 10.5in iPad Pro, which starts from £619/$649.

And here’s the pricing for the regular M5 10.8, which offers exactly the same hardware, but lacks support for the M-Pen stylus included in the box with the Pro model:

The metal unibody chassis tapers at the edges to make it feel thinner than it is, and it looks good. As for connectivity, you’ll find a USB-C port rather than microUSB.

This is used for just about everything: charging, data transfer and also audio output. That means using the included USB-C to 3.5mm adapter if you want to use existing headphones, and also that you can’t listen with headphones while charging the tablet unless you also go and buy a USB-C dock.

That’s understandably a pretty big downside, especially for anyone hoping to use the M5 or M5 Pro as a media device on the go, as you won’t be able to charge and watch Netflix at the same time unless you’re happy annoying fellow passengers by blaring audio out of the speakers.

The 10.8in screen has a resolution of 2560×1600 pixels, for a pixel density of 280ppi. That’s lower than in the 8.4in version, which boasts the same resolution in a smaller display, but it is higher than Samsung’s 10.6in Galaxy Book (218ppi) one of the M5 Pro’s main competitors in the non-Apple tablet space.

There’s a version of the M5 and M5 Pro with a nano-SIM slot. There are also Wi-Fi only versions, but we don’t yet know if these will be sold in all regions or not.

All versions have a microSD slot for adding up to 256GB to the on-board storage. For the standard M5, that’s 32, 64 or 128GB but the M5 Pro doesn’t bother with the smallest capacity and will only be offered with 64 or 128GB.

Like some of Huawei’s older 10in tablets, the M5 has quad speakers. When held in landscape mode, the lower speakers on each side produce mid- and low frequencies. At the top are a pair of tweeters, producing the treble.

On the rear are three gold contacts: these are for the keyboard case, which works with both the Pro and standard versions of the tablet.

Unfortunately, the official keyboard can’t quite match the polish of the tablet itself. Sold separately (we’re not sure of the price yet), it’s not actually manufactured by Huawei, but by a brand called Amork, apparently part of the ‘Fine Triumph Technology Corporation. We’re off to a good start.

Sold in a fairly unremarkable grey finish, the keyboard looks decent, if a little drab, with a lovely soft-touch matt finish. The kickback stand is very solid, the tablet clips in securely, and there’s a handy holder for the stylus (even if it will then block the single USB-C port when it’s attached, which is less helpful).

More important than all of that, the keys themselves are comfortable to type on – they’re a bit mushy, and don’t bounce back up as much as the best laptop keys, but they’re responsive and have a good travel distance. As tablet keyboards go, this one isn’t too bad.

The big downside (well, gripe) is the inclusion of a transparent ‘installation tips sticker, which sits on exactly the bit of the case that folds out to be visible when the tablet is in laptop mode. You have the choice of leaving this up for all to see (upside down) or removing it, leaving behind a lovely sticky glue residue. For an otherwise premium, pro-level device, this is a pretty unacceptable blemish.

As mentioned, the stylus is included in the box with the M5 Pro. Huawei couldn’t confirm if Wacom tech is used or another company’s, but it did say that the M-Pen won’t work on the standard 10.8in MediaPad.

Like similar rivals, it has 4096 levels of pressure sensitivity and has sensors to detect the precise tilt angle, which is useful if you want to shade as you would with a pencil.

Usefully, its rechargeable and a 100-minute charge is said to give 50 days’ use (we haven’t quite had it long enough to test that claim, unfortunately). Cleverly, a USB-C port is located under the clip which rotates to hide it.

From our time scribbling with it, we’d say it’s just as responsive as rivals with no noticeable delay: ink appears on screen at the same rapid pace as Microsoft’s Surface Pro and the Galaxy Book.

As slick as most of the design features are, a productivity tablet will only ever be as successful as its performance lets it be – if it’s sluggish and slow, no amount of brushed metal can get around that. While the M5 Pro doesn’t quite excel here, it is pretty solid in day-to-day usage, and will probably keep up with most users’ needs.

At the heart of the tablet is a Kirin 960, the same processor Huawei uses in the Mate 9 and P10 phones, along with the Honor 9. That’s not the company’s latest chip though – the Mate 10 and Honor View 10 both boast the more recent Kirin 970, leaving the M5 Pro already feeling a touch underpowered.

In real-world usage performance is fine though, with the tablet handling big spreadsheets and multitasking with ease. Still, a processor from a year and a half ago, paired with just 4GB of RAM, means this doesn’t exactly feel future-proofed.

In terms of battery life, the M5 Pro’s 7500mAh capacity managed just 5 hours in our intensive battery test – undeniably a bit of a disappointment – but real-world performance was better than that suggests.

Tablet battery is a little trickier to compare than a phone’s, as people’s usage tends to be more varied, but we found it only needed charging every few days – and the USB-C fast charging can top it up to full in just a few hours.

The IPS screen is bright, capping out at 317cd/m2 in our tests, and paired with great colour reproduction it leaves photos and videos looking fantastic. It’s not up there with the best of Apple’s iPad displays, but we’re confident most users won’t be able to find fault with the screen you get here.

As for cameras, Huawei has packed in an 8MP shooter on the front and 13MP on the rear, both f/2.2. In all honesty, you probably don’t care much about the rear camera on a tablet, but this one is pretty decent, even boasting HDR support to help pick out the details in photos. Don’t expect it to excel in low light though.

The MediaPad runs Android 8.0 together with Huawei’s EMIU 8.0, which is perfectly fine for the standard version, as it’s designed primarily as an entertainment device. For the Pro, it’s not ideal.

Samsung’s Galaxy Book, just one of several rivals, runs Windows 10. That’s arguably a better choice for productivity, but whether or not it’ll be an issue for the MediaPad M5 Pro’s target audience remains to be seen.

One of the chief productivity features built in is the Desktop View software mode. Similar to the Mate 10 Pro’s Windows-like mode when you hook it up to an external monitor, the M5 Pro will automatically switch to this environment when you attach the keyboard if you want it to.

It lets you run multiple apps in different windows and multitask but it just isn’t as refined as Windows, with frustrating inconsistencies – like some apps that are happy to use the M-Pen for handwriting input normally but suddenly won’t when in Desktop View.

Apps are also a potential issue. There’s no shortage of Android apps, but not many are designed to be run in a window and resized at will, and the tablet warns you that not everything is compatible with Desktop View.

It’s a definite improvement on the base Android experience as a laptop replacement, but is still a reminder that Android remains an operating system built primarily for phones, which still struggles with the demands of productivity users.

Huawei doesn’t even pre-load much software to use with the M-Pen, so you’ll have to hunt around for software that makes the most of it – after you’re done uninstalling the unwanted social media apps and games that do come pre-installed.

Huawei has yet to say anything about future Android updates. However, if previous MediaPads are anything to go by, then don’t hold your breath for Android 9.