The Bebop 2 Power is really a dual-purpose drone. You can use it for shooting cinematic footage or dart around at 40mph and have fun with the FPV headset. It’s large batteries mean it flies for longer than its competitors, but the downside is that it isn’t as portable because it doesn’t fold up. If your main aim is to get the best possible video quality, though, then there are better alternatives.

Parrot launched the Bebop 2 back in 2016, but this is an updated model which comes as a comprehensive package for both filming and also playing with FPV.

It includes two batteries (which last 30 minutes each), a controller with a 2km range, an FPV headset that uses your phone as the display and a voucher for unlocking the ‘follow me’ function of the FreeFlight Pro app.

All of this goes a long way to justifying the £629.99/US$599.99 price. That’s if you buy the Bebop direct from Parrot, but if you search around online you’ll find it slightly cheaper.

There are a couple of notable rivals, including DJI’s Spark and the new Mavic Air. The Spark is cheaper at around £500/US$500, but the Mavic Air costs a fair chunk more, especially if you want the equivalent ‘Fly More’ bundle that includes two batteries and other accessories.

If you simply want your first FPV experience with a drone, the Bebop isn’t the cheapest option, but it is a decent choice that’s ready to fly out of the box. A cheaper option is the ViFly R130, but you’ll need to buy a set of FPV goggles separately.

You could also try the £129.99 Powerup FPV which you can buy from Amazon.

Not a lot has changed in terms of design from the Bebop 2, so it’s hard to spot the differences. The light on the back is now blue instead of red, but it’s the bigger battery which gives it longer flight times.

Parrot’s claim that it can fly for an hour is somewhat misleading, though. You’ll have to land when the first battery runs out and clip in the second one for another 30 minutes. 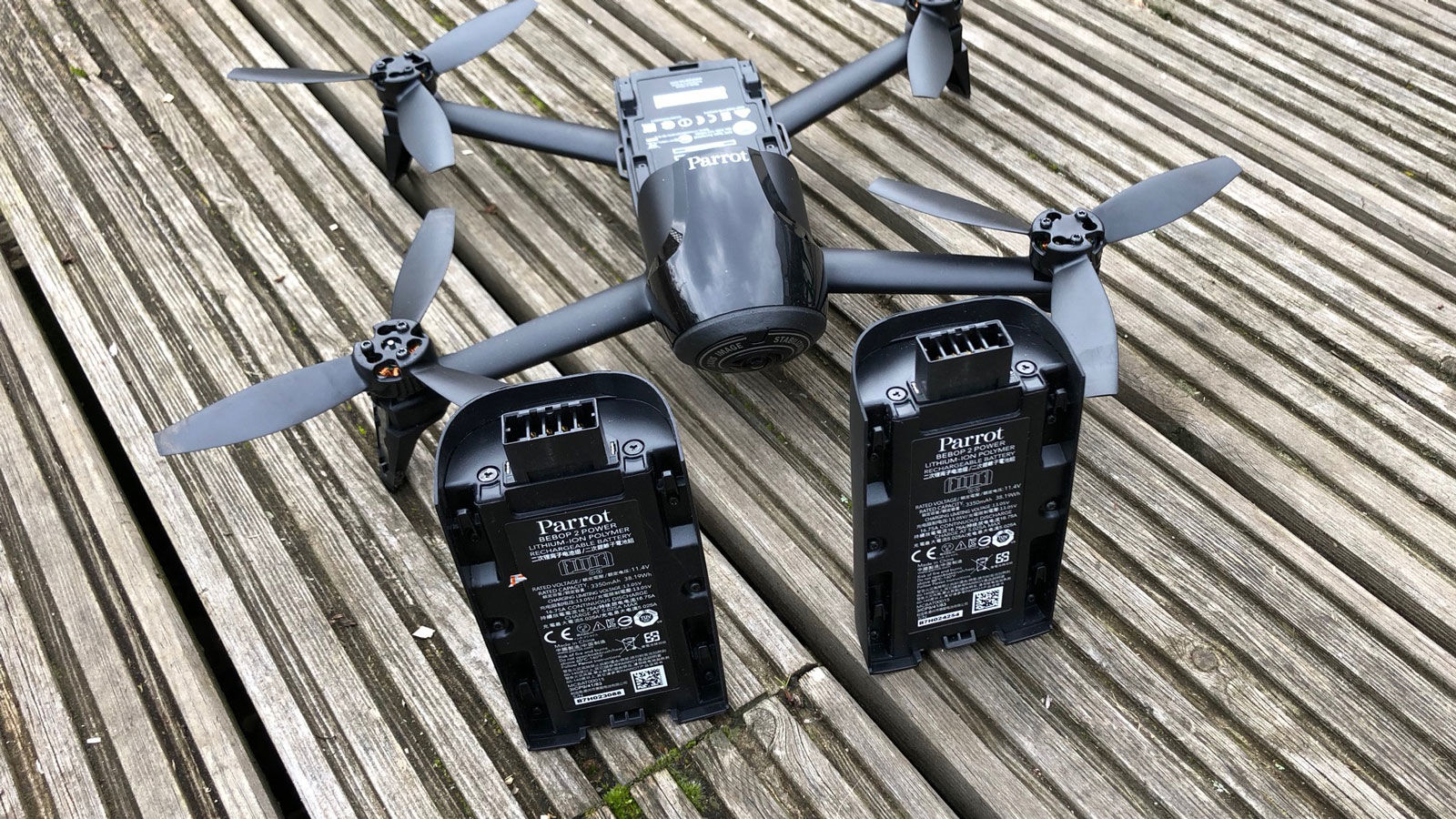 That’s the longest time you can expect in ideal conditions: colder temperatures and higher winds will reduce those times as with any drone.

However, it is still one of the longest-lasting drones. The Spark lasts just 15 minutes before you have to land, and spare batteries aren’t cheap at £50.

The Bebop’s design is a bit inconvenient. It’s not huge, but the fact it doesn’t fold up and the controller is bulky means it’s unlikely to fit in the average rucksack. It’s also annoying that you need a special tool to install or remove the propellers. If you lose it or forget it, there’s no way to fit a prop or replace a broken one without it. Plus, Parrot’s carry case is an optional extra at £99/US$99. 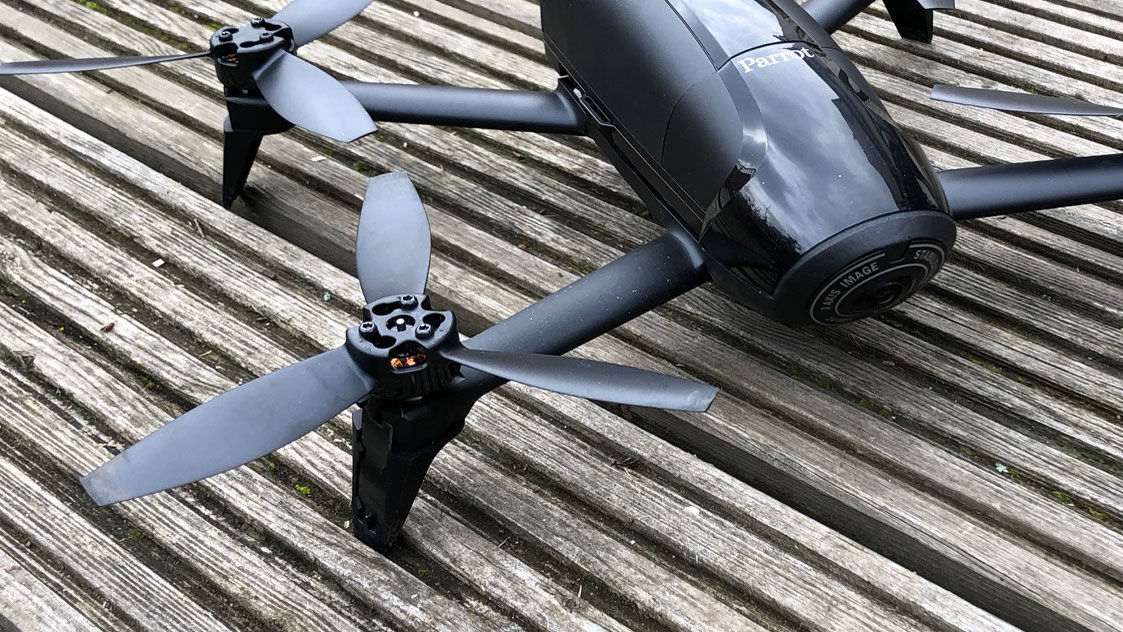 The camera is fixed and relies on 3-axis digital stabilisation rather than a physical gimbal. Footage is surprisingly stable, though, but quality – as you can see below – is not up to DJI’s standard. 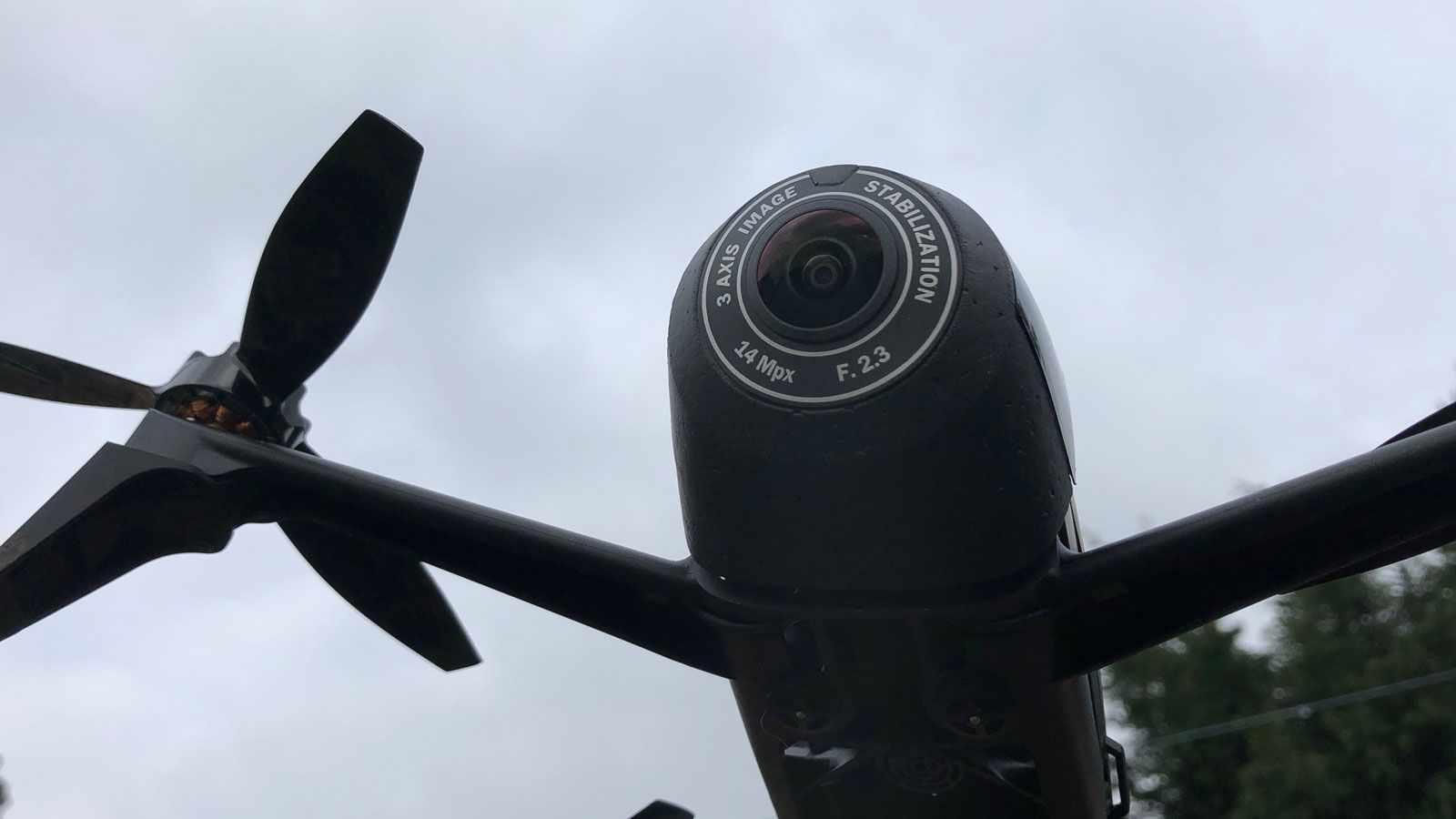 Build quality seems a bit flimsy, but the combination of carbon fibre and ‘Grilamid’ plastic is tough and makes the drone light at just 525g. We crash landed the Bebop 2 once on to grass and it suffered no damage at all.

You get built-in GPS, plus ultrasonic sensors and a visual positioning system underneath which is used both for the return-to-home function and for some of the automatic flight modes. 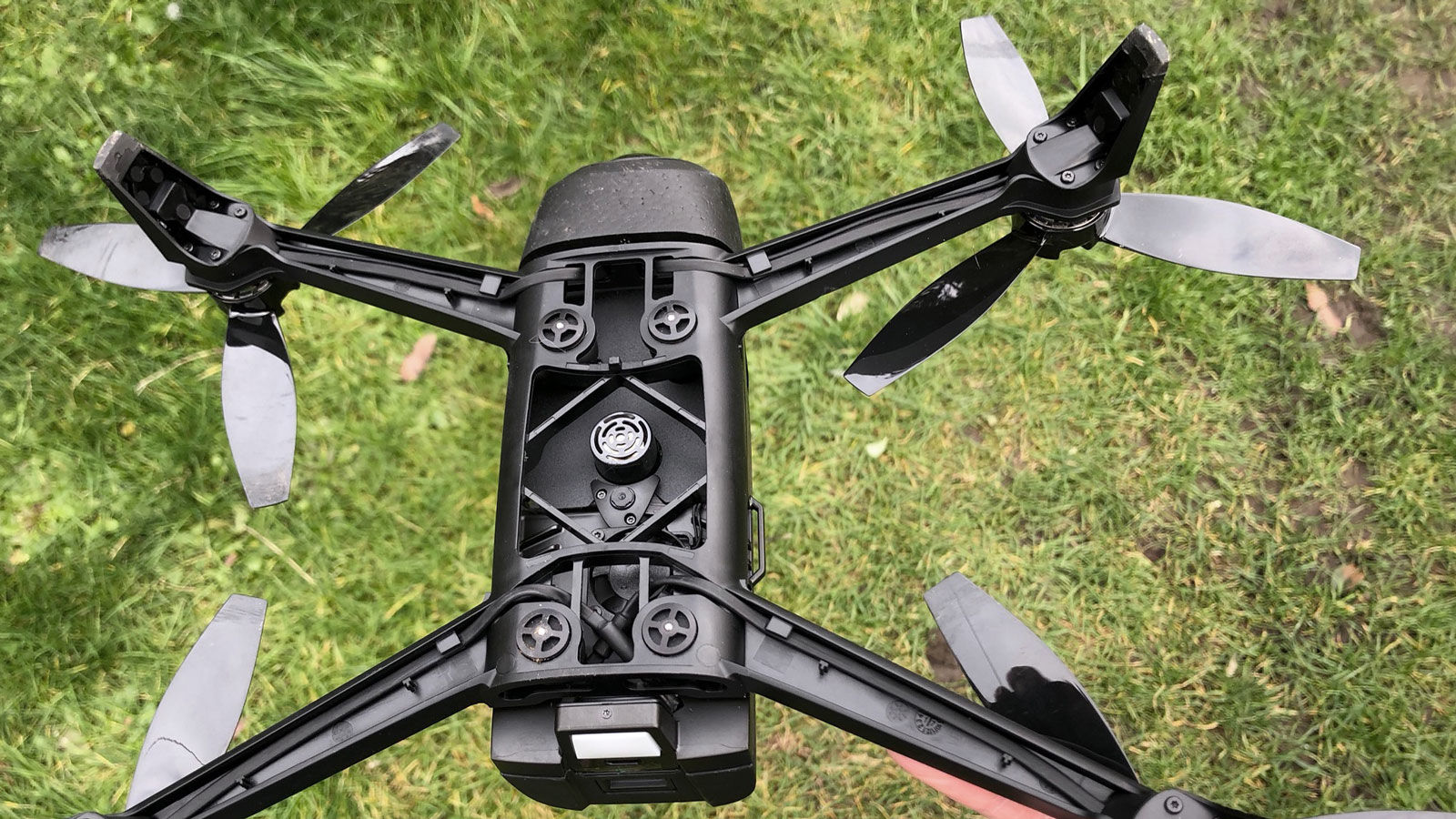 There’s no object avoidance, however.

The SkyController 2 is a bit like an Xbox controller with a large antenna section on the rear. Its screw-on clamp will hold a phone when mounted horizontally, or a tablet when placed vertically. You’ll need to provide your phone’s USB cable to connect it to the controller, which may or may not charge your device depending upon what it is. 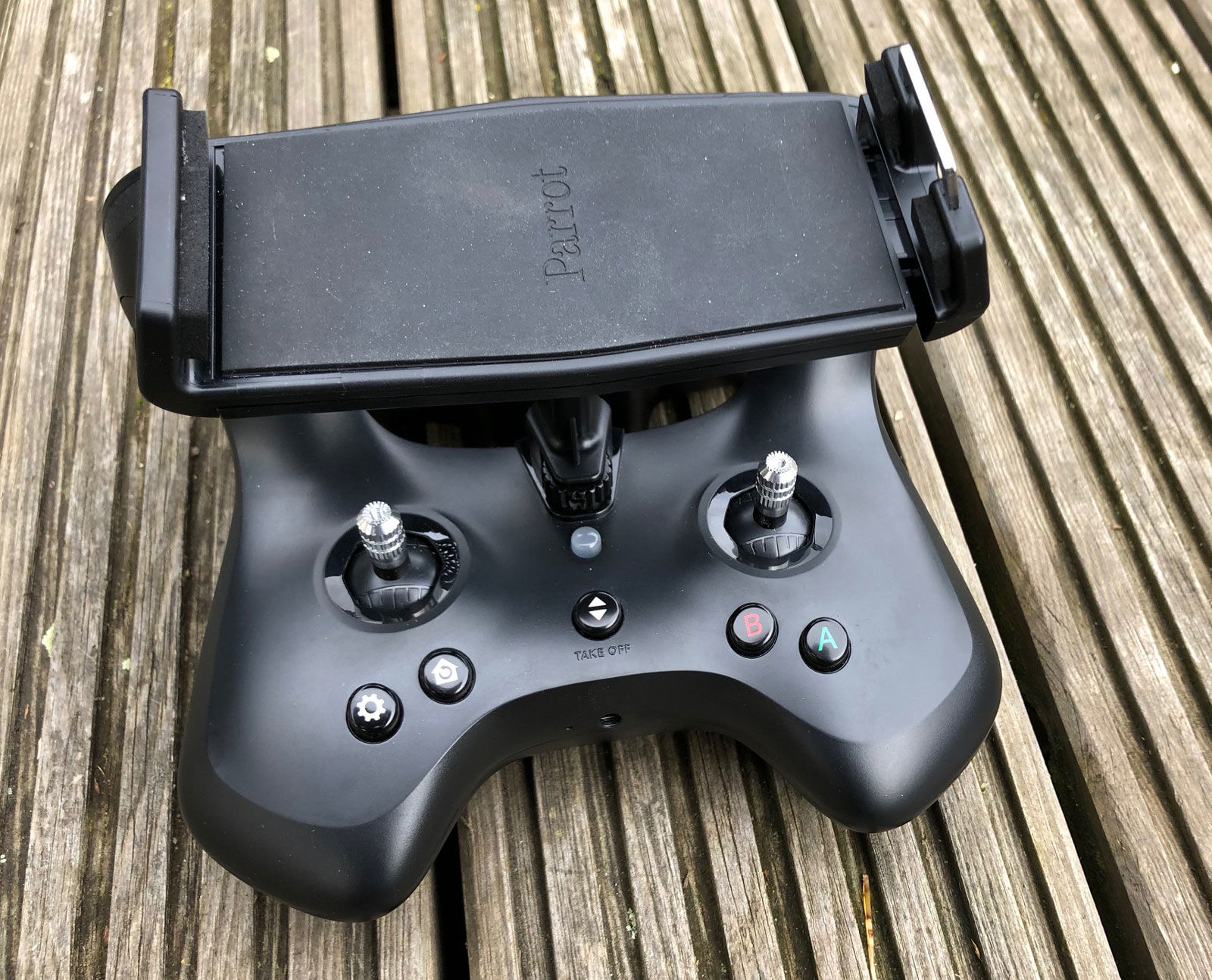 With a tablet, the whole thing is pretty heavy, but it’s comfortable with a phone.

With either, the FreeFlight Pro app is easy to use and provides all the data you need around the edges.

It’s a lot like DJI’s Go app, in fact, and we like that you can cache local map data before you head out. You can then choose whether to view the 720p video feed from the drone, or have the map covering the screen with the video as a thumbnail. 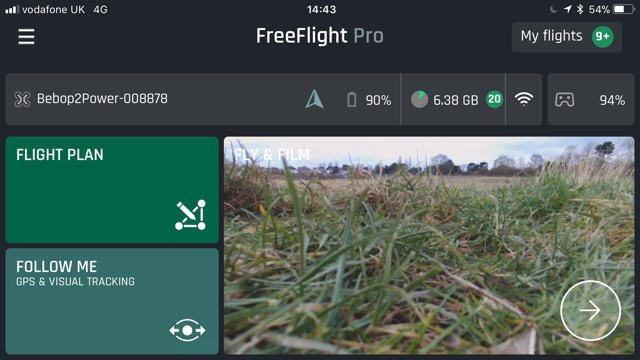 Tap on the FLIGHT PLAN button and you’ll be prompted to cough up £19.99 to gain the ability to pick points on a map to pre-determine where the BeBop flies. In the latest version of the app – 5.2 – there’s a brand new Flight Director feature. This brings automatic video editing, much like GoPro’s Quik app. You pick the videos to include and the software (which uses technology from muvee) generates a 15-second compilation with music (which you can also select).

However, if you want more than a mere 15 seconds, you’ll have to – again – cough up £19.99 (or £14.99 for the Android version) for the Premium version of Flight Director. This also brings three styles to choose between: chronological story, fast trailer and cinematic scenes.

The CockpitGlasses have been updated and now collapse for easier storage, and they accept phones with screens from 4.7-5.5in. They’re reasonably comfortable and let you switch to ‘direct view’ so you don’t have to remove the headset to see the drone itself.

It’s still a good idea to have someone spotting for you when you fly in FPV mode, though, and it’s a requirement of UK drone law that you keep your drone in your line of sight at all times, something you can’t do if a phone is strapped to your face.

Setting up the Bebop 2 for its first flight is straightforward enough. You may need to download and install updates, which is all done through the app. It’s a quicker process than for DJI drones (at least in our experience) and the compass calibration worked first time and took only a few seconds.

There are two distinct modes: filming and flying. In the former, speeds are limited in order to get smoother, better looking footage. We particularly like that it really slows down the rotation speed, as it’s far too easy on other drones to turn round too quickly without realising that the resulting video is unwatchable. 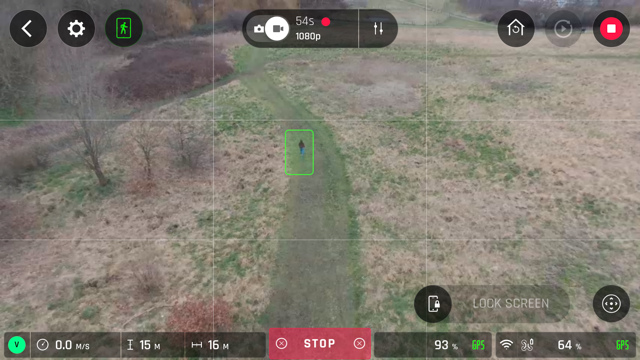 The app includes a handful of automatic modes, similar to DJI’s Quick Shots. There are classics such as reveal, orbit and ‘epic’ which flies up and away from you. Use the voucher and you can use the ‘Follow me’ feature which also includes ‘Touch and Fly’ which brings more automatic modes such as boomerang, tornado and parabola. 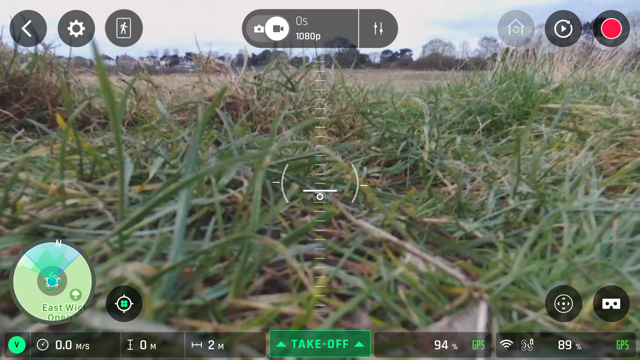 The bad news is that video quality just isn’t as good as even the DJI Spark, despite both being limited to 1080p at 30 frames per second.

Where the Spark’s footage is sharp and detailed, the Bebop’s is fuzzier and much less impressive on a TV screen. Colours are also more muted.

Here’s a still grab from the 1080p video which illustrates the sharpness you can expect (click or tap to enlarge): 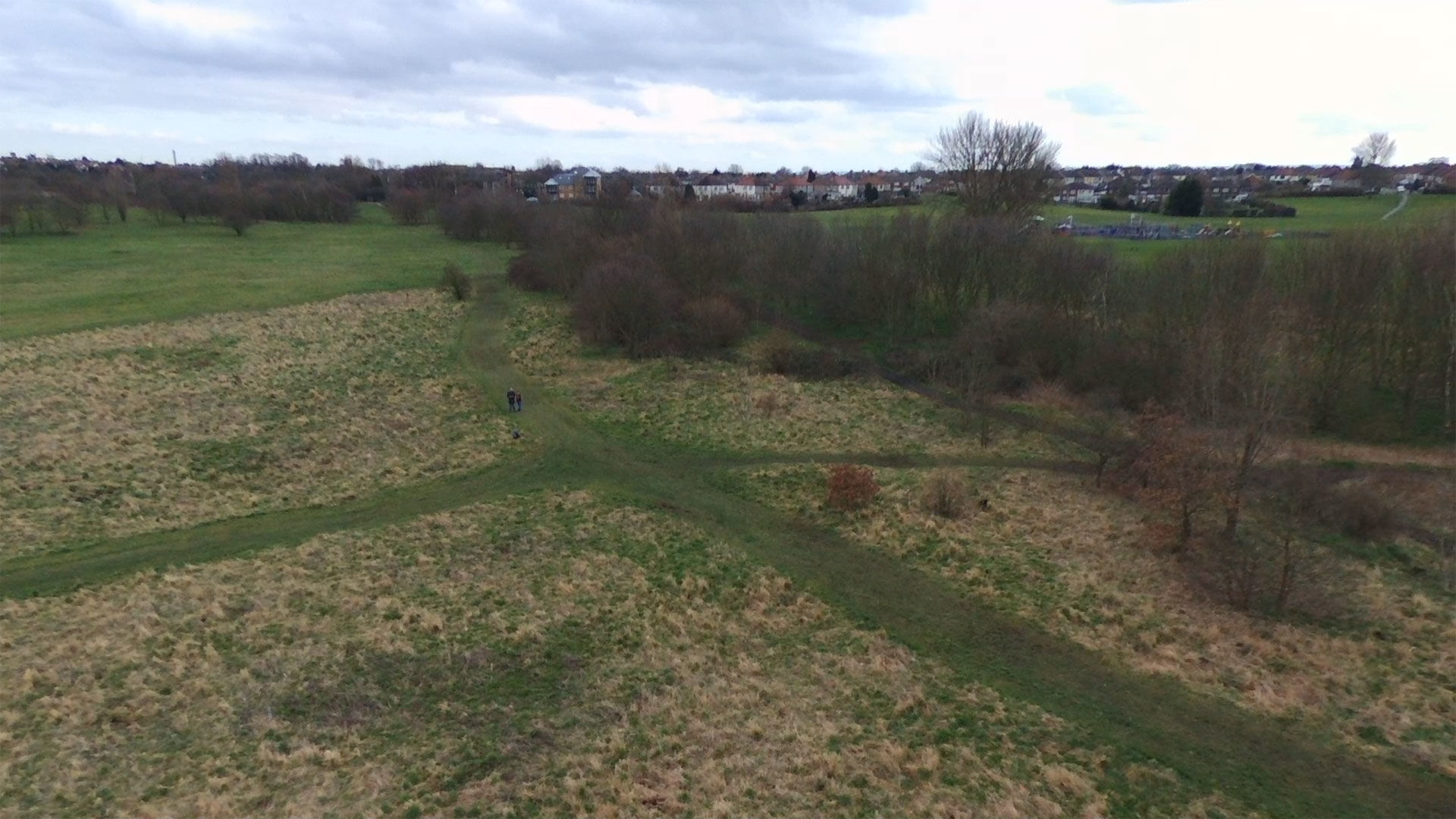 It’s also pretty annoying that video is stored in the on-board 8GB of memory, with about 7GB available to the pilot. To offload the video you have to do it via the app, or connect the Bebop to your computer using a micro USB cable.

In the ‘flying’ mode, the speed restrictions are dropped and it will fly up to a claimed 65km/h (40mph). It’ll also remain stable (so Parrot claims) in winds up to 60km/h (37mph). During our tests it wasn’t nearly that windy.

Despite its light weight, the Bebop 2 Power is very stable in flight. This instils confidence from the get-go and it’s very easy to control.  What we don’t like is that there’s no soft landing. The sensors prevent you from lowering the drone more than about six inches above the ground, and pressing the landing button just cuts power to the motors so it drops to the floor with zero grace.