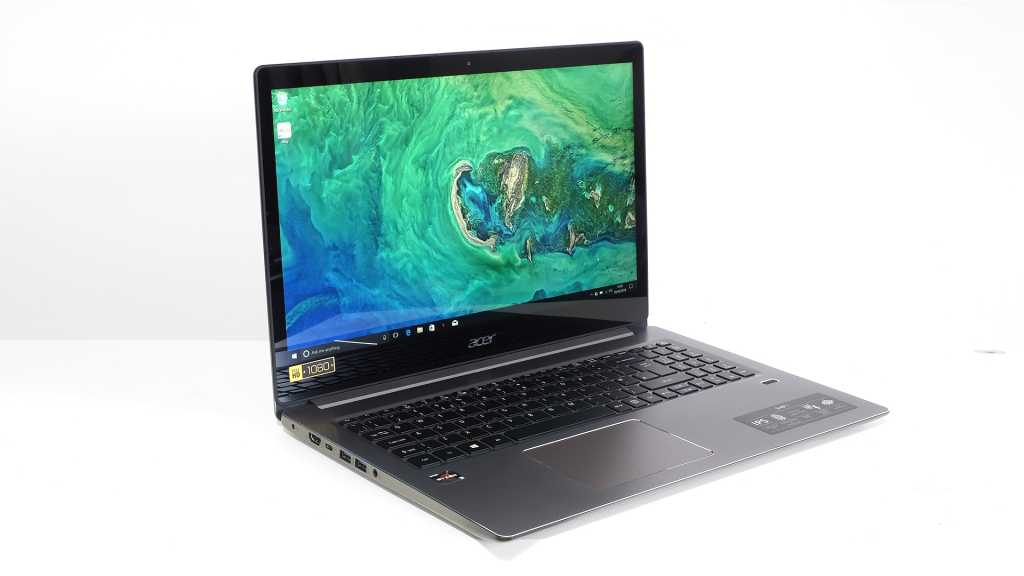 The Acer Swift 3 is not a killer laptop in any one area. But it gathers enough appeal in a wide variety of areas to make a lot of sense for people after a laptop that can do just about anything. It has better games performance than your average Intel machine, though, and the screen is fairly good even if its colour depth is limited. Most of all, though, it looks and feels nicer than a lot of 15.6in laptops in this class. And costs less than other premium models that match it for build. That said, if we had £799 to spend we’d be very tempted by the 14in Swift 3 with an Intel Core i5 CPU and MX150 GPU. It will handle games that bit better.

It has a 15.6in screen and, most interesting of all, an AMD Ryzen CPU with Vega graphics rather than the usual Intel chips. If you’re after a sub-£800 aluminium laptop with a large screen, the Swift 3 SF315 is a solid choice. Battery life and the display’s colour depth could be better, though.

In the UK you can buy it from Currys PC World. In the US, you can get it from Amazon.

Laptops that are relatively affordable but have an aluminium shell and a 15in screen are surprisingly thin on the ground. HP Pavilion 15 and Asus Vivobook have more of a budget vibe than the Swift 3.

Be careful when shopping for the Swift 3, as most models have a 14in screen and use Intel processors. And, funnily enough, It’s actually another Swift 3 we’d be tempted by. You can get the 14in model with an 8th Core i5 and GeForce MX150 graphics for roughly the same price.

If you’re not set on having a 15.6in screen, that Swift 3 is quite the deal. All Swift 3 models come with a one year return-to-base warranty.

The Acer Swift series usually strikes a great balance between pragmatism and style. They are rarely the most beautiful laptops in their class, but tend to be cheaper, while matching the alternatives on performance and versatility.

This Acer Swift 3 has a particularly sober, neutral look that offers the basics of premium laptop design without any potentially off-putting flourishes. Parts to note include the all-aluminium case, a light brushed finish on the lid and the screen construction.

There’s no ‘lip’ to the Swift 3’s screen surround. It’s just a flat pane of glass.

The edges of the keyboard surround and trackpad are beveled to reveal the bright aluminium underneath too. Still, the main impression the Swift 3 leaves is of a smart, but ultimately quite sensible and plain laptop.

It weighs 2.1kg and is 18.9mm thick. This, obviously, isn’t ideal if you want a laptop you can carry around all the time. However, it is significantly thinner than the HP Pavilion 15. We’ve taken the Acer Swift 3 out in a rucksack on a few occasions and didn’t mind the weight too. Bear in mind it’s only around 200g heavier than the Apple MacBook Pro 15.

The Acer Swift 3’s build quality is very solid. Aside from a tiny bit of keyboard flex, which isn’t noticeable in normal use, it’s stiff and robust.

On the Swift 3’s sides is the typical connection array of a laptop trying to please those with little patience for adapters. You get two USB 3.0 ports, another USB 2.0 on the right side and just a single USB-C.

This is the connection that will eventually take over in laptops, but given how old some of the peripherals we still use are, it’s not as if we’re going to stop using old USBs. The Swift 3 also has a full-size SD card slot, HDMI and a Kensington security slot.

We have no complaints about the Swift 3’s keyboard. There’s enough travel to satisfy, the key action is solid, their response isn’t hollow. This is a lighter-feel keyboard, but typing feels good.

This isn’t the quietest keyboard around, as typing sets off some high-pitch micro-click noises. However, we don’t find it irritating.

The Swift 3 keyboard also has a white LED backlight. You don’t have any control over its intensity, but we’re just glad it’s here. Some mid-price laptops like this do not have a backlight.

The trackpad below looks and feels great too, although it uses a plastic surface rather than a textured glass one. We’d be surprised if Acer had managed to fit in such a pad at this price, though, as they’re rarely seen in laptops below £1000.

Its buttons are integrated into the pad itself. The clicker is solid, with no annoying pre-click or any sense of a too-stiff action. There’s also zero dead zone at the top of the pad, although the clicker is easier to depress in the middle/bottom than the top.

You get a 15.6in 1080p screen. This is, oddly, one of this laptop’s unique selling points, as you won’t currently find all that many alternatives with as nice a build. The HP Envy 15 is the obvious rival, but as of February 2018 there are no versions of that laptop with current hardware.

According to our benchmarks at least, the display is one of the Swift 5’s weaker points. Its colour saturation is just OK and top brightness is not impressive. However, we can’t ignore how surprisingly good it looks to the naked eye.

Part of this will be down to its solid contrast of 1009:1, part the pleasing colour calibration of the panel. It has a slightly warm tone, which is often the perceived effect when a TV is professionally tuned.

Until we saw the Swift 3’s colour rendering results we expected better than the 57 percent of sRGB it achieves. After this, looking more closely at the vivid reds used in, for example, the Chrome and YouTube logos, the limited colour depth is there to see.

We’d still class this as an enjoyable display, though, and have seen screens look significantly worse with the similar colour coverage levels.

Maximum brightness is something to consider if you need a laptop to use out of the house. Maxing-out at 229cd/m², it doesn’t have the backlight power to comfortably contend with the reflections the glossy display finish will cause outdoors.

We can’t complain about the screen’s construction, though. The Swift 3’s top display layer is Gorilla Glass, similar to that used in phone displays, and the screen part has stiffness comparable with that of laptops well over £1000.

The Acer Swift 3 element that initially interested us most was its processor. It’s the first Acer laptop we’ve reviewed to use one of AMD’s Ryzen CPUs. It’s the Ryzen 5 2500U CPU, with Vega 8 graphics.

This is a quad-core CPU with eight threads, a clock speed of 2GHz and a boost of 3.6GHz.

However, the AMD chipset has far better integrated graphics. This isn’t just better for gaming, but video editing too.

Typical for a laptop with a powerful CPU, 8GB RAM and a 256GB SSD, the Swift 3 makes Windows 10 feel good. It’s fast and responsive. However, we have noticed the occasional oddity. Video playback with some apps is not always smooth, which is almost certainly a driver issue given the processor load for something like this is minimal.

How good is it for games? The Vega 8 GPU trashes the Intel HD 620 chipset used in Intel processors, but you’ll still get much better performance from a GeForce MX150, as used by a similarly priced 14in Swift 3 variant.

Gaming performance is roughly similar to that of a laptop with a GeForce 940MX graphics card. It’ll do the trick for light gaming, but the Vega 8 GPU does not set any new standards.

Noise and fan behaviour is not too different to that of an Intel laptop. Write a document or browse a couple of simple websites and the Swift 3 is near-silent. Play a game and the internal fan system fires-up pretty quick. However, its noise is not offensive or high-pitch.

At this point, having not reviewed many Ryzen-powered laptops, we can’t really tell how their battery efficiency stacks up next to Intel’s. However, the Acer Swift 3 suggests AMD’s power consumption is higher.

Playing back a 720p video on loop at 120cd/m² brightness, the Swift 3 lasts five hours. That seems fair given the way many people use 15.6in laptops, in a less portable manner than 13in and 14in models. However, it’s nothing to get too excited about.

The battery itself is a 48Wh unit — not huge. But the 51Wh HP Envy 13 reviewed last year lasts a terrific 12 hours 20 minutes in the same test. Think carefully about whether five hours away from the charger is enough for you before buying.