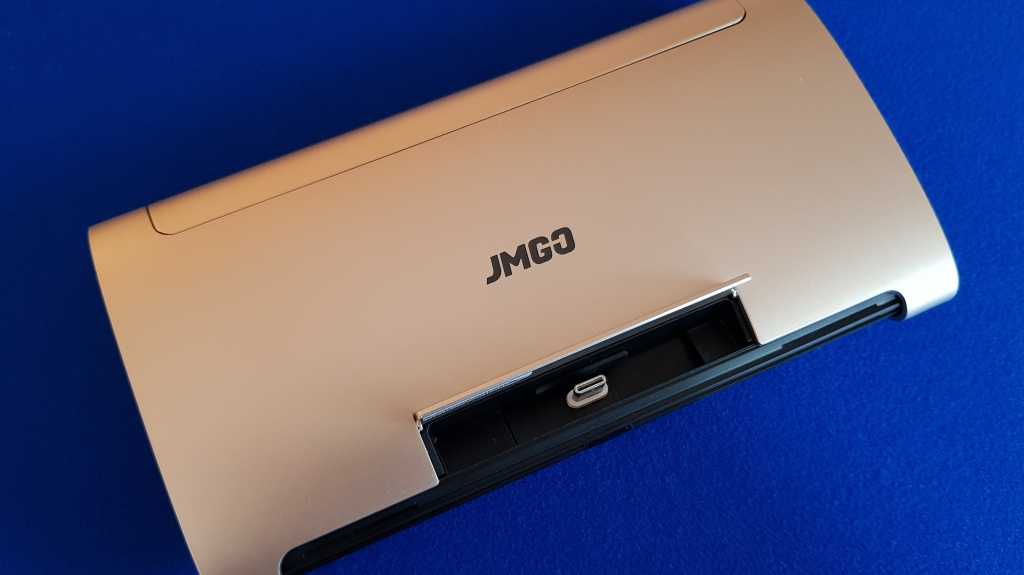 The JMGO M6 is a useful device for chucking in a bag and streaming media up to 100in wherever you want. It has a nice design but it’s not flawless, and navigation can be fiddly using the small remote control. We’d like to have seen stock Android built-in, and streaming support needs to include audio for Android devices. We don’t understand the point of the dock either.

The M6 is the third projector we’ve tested from JMGO, following on from the JMGO View and JMGO G1. Sadly it’s not even slightly in their league, in terms of design or functionality, but that doesn’t make it any less cool for streaming big-screen media anywhere you like.

The JMGO M6 is a portable DLP projector that would fit into an oversized – perhaps jacket – pocket, and in our tests can go roughly an hour or two away from the mains. There’s an HDMI and a USB port for hooking up streaming devices and storage, as well as a phone dock and a preinstalled Android 7.0 Nougat operating system.

But this is not Android as you know it. At no point do you sign into your Google account, and while there is an app store it is not Google Play. Nor will you find the likes of Gmail and Google Drive preinstalled. You can download apps such as Kodi, ShowBox and Netflix for streaming movies, or as we did plug in a NowTV Smart Stick to the HDMI port. There’s also Kingsoft Office and a laser-pointer remote, which could be handy for giving presentations.

Our JMGO M6 was shipped from GearBest, where it currently costs £307.54 (US$419). Given the specification, which we’ll come to later, this is a reasonable price for a projector such as this.

Do bear in mind that GearBest ships from China, which means if your package is picked up by UK Customs you will be asked to pay import duty. In our experience this request usually comes via DHL, which asks for 20 percent of the value printed on the shipping paperwork plus an admin fee of £11. Other shipping options – including a free option – are available.

When you are buying from China your rights are different to within the EU also, and returning a faulty device can be difficult. Read more in our guide to buying Chinese tech.

JMGO’s previous products have been oozing with style and class. Built into aluminium-magnesium alloy housings that look awesome and also help dissipate heat, complete with powerful stereo speakers, everything about them screams premium.

The JMGO M6 is a golden glossy plastic, so a bit of a come-down there, and it includes two small 2W speakers that are adequate but not inspiring. You can hear the fan over the audio even at max volume, though you can play around with the fan-speed settings.

The M6 is roughly the size of a large purse, and lightweight at 432g. Though you’ll feel its inclusion in a bag or pocket, it is easily portable – more so than the 1kg JMGO View, certainly.

Whereas we didn’t want to hide the G1 and View out of view, the M6 is less impressive to look at. But it does feel well made, and there are some aspects of its design worthy of note.

JMGO always tries to do clever things with its remote controls, and while the circular design of the G1 didn’t quite work here the M6 remote shows genius.

Like everything else with the M6, however, it isn’t flawless. While the JMGO M6 has a rechargeable battery the remote requires two AAA batteries (not supplied). We’d like to see it draw a charge from the projector while clipped to its side, although we acknowledge that this might mean you find yourself with a dead projector battery when it hasn’t been used in a while.

It’s also rather small, which is both good and bad. It is nicely portable and reasonably stylish, but the buttons themselves are very small and fiddly. There’s also no mouse mode, which meant we struggled to get past the initial Wi-Fi password input request and resorted to plugging in a USB mouse. Navigating apps can be frustrating, and you can’t rely on plugging in a mouse all the time as there’s only one USB port.

If you can get the hang of it the remote control has volume buttons, power, more options, directional controls, select, back and home. There’s also the aforementioned laser pointer in case you want to use this thing for presentations.

You can also install a remote control app on your phone or tablet. There is a QR code in the instructions, though we found it didn’t work. The app you’re looking for is FunControl, and though it’s not in Google Play you should find it on JMGO’s website.

On one end of the M6 is the I/O panel, where you’ll find a full-size HDMI and USB 2.0 port. There is also a 12V 3A DC port for recharging the device, and four LEDs that activate to show you how much power remains. A power button is also present, which you slide to the right to turn on or off the M6, and to the left to put the USB port into power bank mode.

On the underside is a small flip-out stand. It feels flimsy, but it does the job for angling the projector correctly wherever you need to place it.

You’ll also find a plastic focus wheel to the side of the lens. It is a better approach to software controls seen on other JMGO devices, since a slight lag there can make it difficult to quickly get right, but it does seem incredibly sensitive and we found just jogging the M6 was enough to throw it out of focus.

The phone dock is peculiar. Upon first inspection it looks really useful, complete with magnetic attachments for Lightning, Micro-USB and USB-C. But as far as we can tell – at least when tested using our Galaxy S8 – you can’t just plug in a phone and have the JMGO M6 mirror its contents to the wall. Instead you need to install the HappyCast app on your phone, which is Chinese, fiddly and a bit flaky, then cast your screen to the projector.

With your phone in the dock it will charge, although the 5,400mAh battery inside the M6 isn’t really big enough to charge a phone if you want it to last long enough to stream a film. (You can also use the full-size USB port for this, having toggled the power button to battery mode.)

Some apps will automatically display on the projector in landscape mode, such as Netflix, but others like YouTube will not. And watching a YouTube video in portrait mode on a 100in widescreen is not ideal.

There is a way around this: take the phone out the dock and turn it on its side, in order that the YouTube video displays in landscape mode. HappyCast does not require the M6’s dock to work. So, in which case, we have to ask why the dock?

Even more peculiar is the fact that while this is an Android projector, HappyCast will stream audio only from iPhones – not Android. This means you must use the speakers built into your device and, as is the case with our phone, these are downward-firing into the projector’s body. Frustratingly, right now the M6 doesn’t support the iPhone 8 or iPhone X, though a promised firmware update will fix this.

It’s fair to say we’re not a lover of the dock, and we really don’t understand the point of its inclusion.

What you get is about right in terms of the pricing, and you should keep in mind that some of the best projectors are significantly more expensive.

With a 0.5- to 2.65m throw distance and 1.2:1 throw ratio the M6 will project from 20in to 100in. The native resolution is nothing special at 854×480, and though it ‘supports’ higher-resolution content it will simply downscale that media.

The 2in DMD lens supports a 1000:1-3000:1 contrast ratio and a brightness of 200 Ansi Lumens. This is acceptable for a portable device but, again, nothing extraordinary.

As we mentioned there’s a manual focus wheel, while software keystone correction (up to 40 degrees) is offered in the settings. You can also adjust the projection mode, although we can’t imagine you’ll be ceiling-mounting the M6 with a phone docked on top.

Despite its battery being only a third of the size of that inside the JMGO View, runtime is largely similar. It will last between an hour and two, depending on what you’re using it for. We suspect this is partly due to the less powerful internals, including some smaller, less impressive audio hardware. The speakers will do the job in a small room with little background noise.

There’s just 1GB of RAM onboard, which is a concern, but you shouldn’t find yourself trying to do more than one thing at a time on the M6. It performed reasonably well in most of our testing, though streaming Netflix over HappyCast occasionally cut out and threw up a blank screen.

Internal storage is also very low at just 8GB, though it’s unlikely you’ll want to store much stuff on the projector itself. Most of the time you’ll be streaming media via an app or your smartphone, rather than from the device itself.

When you first turn on the M6 its fan seems very loud, but this is quickly toned down as it gets going. Regardless we could still hear it over the audio even at max volume. In the settings you can adjust the fan speed, which in turn affects the noise. JMGO quotes 30dB from the M6.