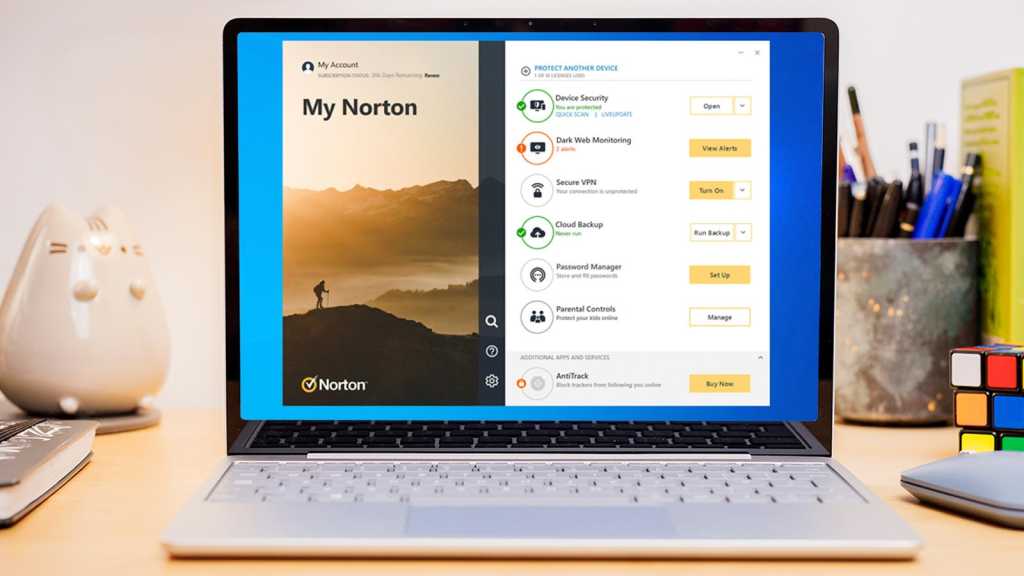 As one of the biggest names in antivirus, Norton is probably on your shortlist already. These days, though, antivirus alone isn’t enough and that’s why Norton 360 exists: it offers ‘all round’ protection from considerably more threats than simply viruses.

In fact, not only can Norton 360 protect all your Windows, macOS, iOS and Android devices, it’ll also protect you by monitoring the dark web for your personal details such as passwords, driving licence, credit card numbers and more. If any is found, you’ll be alerted so you can take action to try and mitigate any losses or problems should someone attempt to steal your identity.

And over the past year or so, Norton has been adding and improving features. The VPN, for example, is now a stronger rival to standalone VPN services. Other features, unfortunately, are add-ons and require separate payments. The new Anti-Track subscription offers robust protection from website trackers (and their advanced fingerprinting techniques), but it costs £40 / $49.99 per year for a single Windows device.

Before getting too much further, it’s worth explaining that there are different tiers to Norton 360, beginning with Standard, then becoming more comprehensive with Deluxe, and ending with Premium.

The following features are included in all versions, but note that Standard protects only one device, while Deluxe lets you install protection on 5 and Premium covers 10 devices.

Parental Control, School Time and Dark Web Monitoring are included only in Deluxe and Premium.

If you like the sound of cloud backup, note that Standard comes with 25GB, Deluxe with 50GB and Premium 75GB.

Like many of its competitors, Norton 360 has a relatively slick-looking and easy-to-use interface on all the devices it supports.

My Norton is now the ‘face’ of the product across Windows, macOS, Android and iOS. This gives you an at-a-glance status report that not only shows you the major features available, but whether they’re set up and enabled or not. 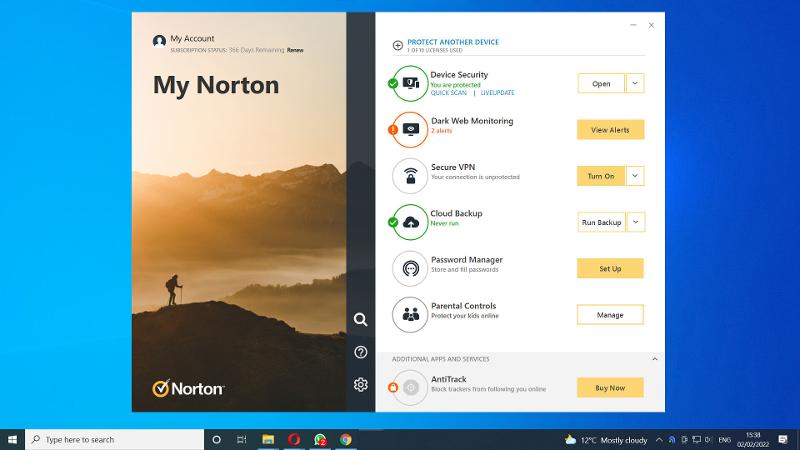 Some of these you’ll configure during installation. It’s nice that the cloud back is enabled with a single click, though this protects common folders such as Documents. If you want other folders backed up, you’ll need to go in and add them to the list.

Good web protection is essential these days, and Norton provides plenty of cover. There’s Browsing Protection, for example, which prevents web-based malware exploiting known browser vulnerabilities as you surf, and sites are flagged by reputation in search results. Web downloads are also analysed, and after scanning, a report on their safety pops up.

The only snag is that it wants you to install four extensions in each web browser you use: Norton Home Page, Norton Safe Search, Norton Safe Web and Norton Password Manager. 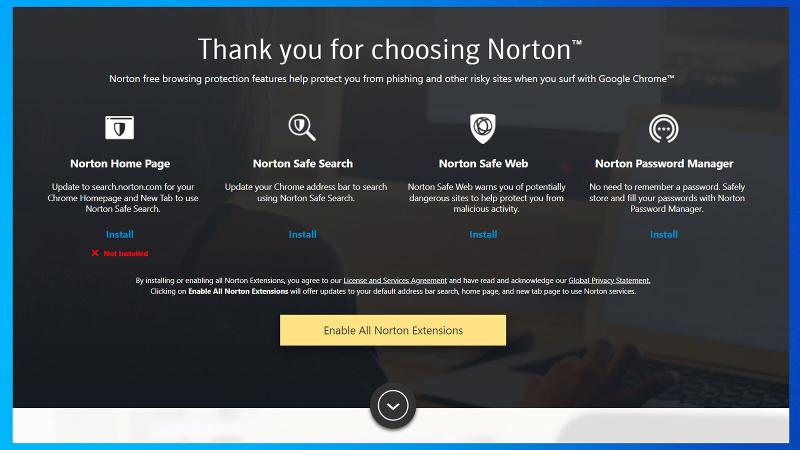 Home Page and Safe Search can be safely ignored, as it replaces your normal search engine with a Norton-branded version of Yahoo or Ask.com. Our advice is to just enable Safe Web, which puts a reassuring green tick next to search results from your favourite provider.

The mobile apps benefit most, or rather their users, from recent updates because you no longer have to download so many apps to get the full range of features, such as the VPN. You also get warnings of potential phishing messages which might otherwise catch you out into handing over personal or payment details. 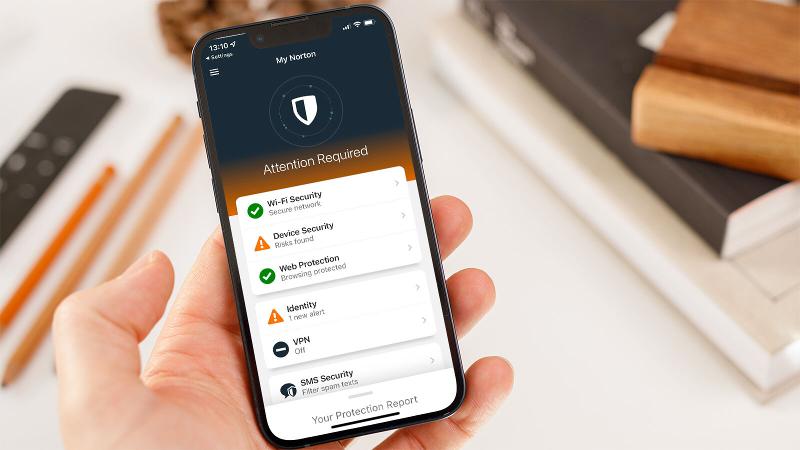 Though Norton bought LifeLock a few years ago and identity monitoring is part of Norton 360, it’s not exactly integrated. You still have to install the separate LifeLock Identity App on mobile devices and on desktop, where it’s called Dark Web Monitoring, you’re sent off to Norton’s website.

The feature keeps an eye on dark web sites in case any of your details pop up for sale, and it will then notify you if they do so you can take action to change passwords, email addresses and so on.

It will begin by monitoring for the email address you use for your Norton account, but you can add the following information as well:

As features vary across devices, the home screen shows slightly different information. On Windows, for example, you have easy access to the VPN, cloud backup and password manager.

The password manager is perfectly good, syncing your logins across your devices, telling you how strong your passwords are and offering to update passwords for certain websites. The only notable feature  missing is the ability to share logins securely with others. 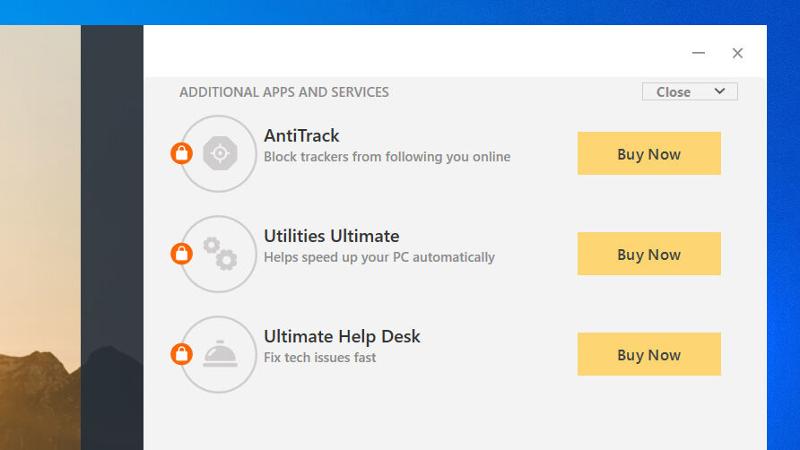 At the bottom of the My Norton screen a pop-up panel lists all the additional services you can subscribe to for even more protection. There are several more of these available to US users than in the UK where the list comprises AntiTrack, Utilities Ultimate (Norton’s PC cleaner software) and Ultimate Help Desk, which offers support for any tech issues, not just 360 Deluxe.

SafeCam is another useful feature, even if it’s only available to Windows users. It monitors for apps which request use the camera on your device and alerts you so you can block those attempts if necessary.

The File Cleanup facility is useful as it frees up space occupied by temporary files. Startup Manager uses community data to let you know which of your apps use a lot of resources so you can decide which ones to disable.

Finally there’s a useful graph showing all major events including malware detections, scans and security alerts, along with the use of performance tools.

It’s also worth mentioning the smart firewall, also just for Windows.  As well as blocking external attacks – just like Windows’ own firewall – it also monitors apps and warns you if it thinks they might be abusing your internet connection. It uses a database to know which apps are reputable and allows them to use the connection without bothering you, but will closely monitor unknown apps.

There’s a two-way firewall included on the macOS version of Norton 360, along with the VPN, Password Manger and a cleanup tool that can free up storage space.

Norton’s antivirus has performed consistently well over the years and is a reliable defence against all types of malware, including ransomware.

According to AV-Test’s latest Windows report, it managed perfect scores, as it did on Android and macOS. It sailed through SE Labs’ tests as well, with unblemished test cards, earning it the top rating.

As if that weren’t good enough, Norton offers a “100% guarantee” that any viruses that do get onto your device will be removed by its own experts. And if they can’t get rid of it, you get your money back. Just note that this now applies only if you have auto-renew enabled for your subscription.

The Windows app is discreet with few pop-ups appearing at all. Occasionally, you’ll see a message about the background scan completing. but because it runs when you’re not using your computer, it’s hardly intrusive. In fact, one of the only times you’re guaranteed to see a pop-up is when Norton analyses downloaded files for you, which is a good thing.

Previously, we weren’t overly impressed with Norton’s VPN service, but conceded that since it wasn’t costing you any extra, it was fine to use for an extra layer of security and privacy online.

In 2022, though, it’s an altogether more compelling proposition. You can now choose a region to connect to and it managed to unblock US Netflix and Amazon Prime – an unexpected surprise. 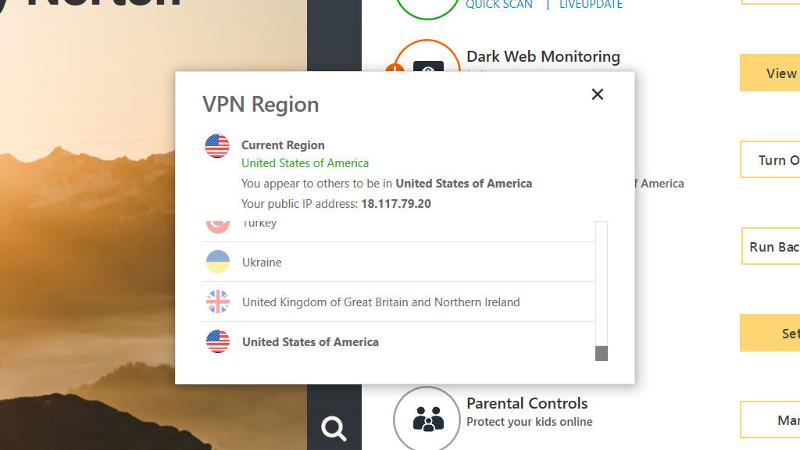 Since there are no limits on bandwidth, you can use it as much as you want, but it doesn’t offer apps for streaming devices, so if you wanted to use it on an Amazon Fire TV Stick, for example, you’d need to jump through a few hoops to install the Android .apk file.

That’s for one year of protection including 50GB of cloud storage, Norton’s VPN service, password manager and dark web monitoring is included, features missing from some rival security suites.

With improved apps and a respectable VPN service, it’s easy to recommend Norton 360 Deluxe to anyone with up to five devices to protect.

As ever, malware protection is top notch, and there are useful extras such as the cloud backup which offers extra protection for your important files, though this is still only for Windows.

Add in the password manager, identity protection and it really lives up to its name.